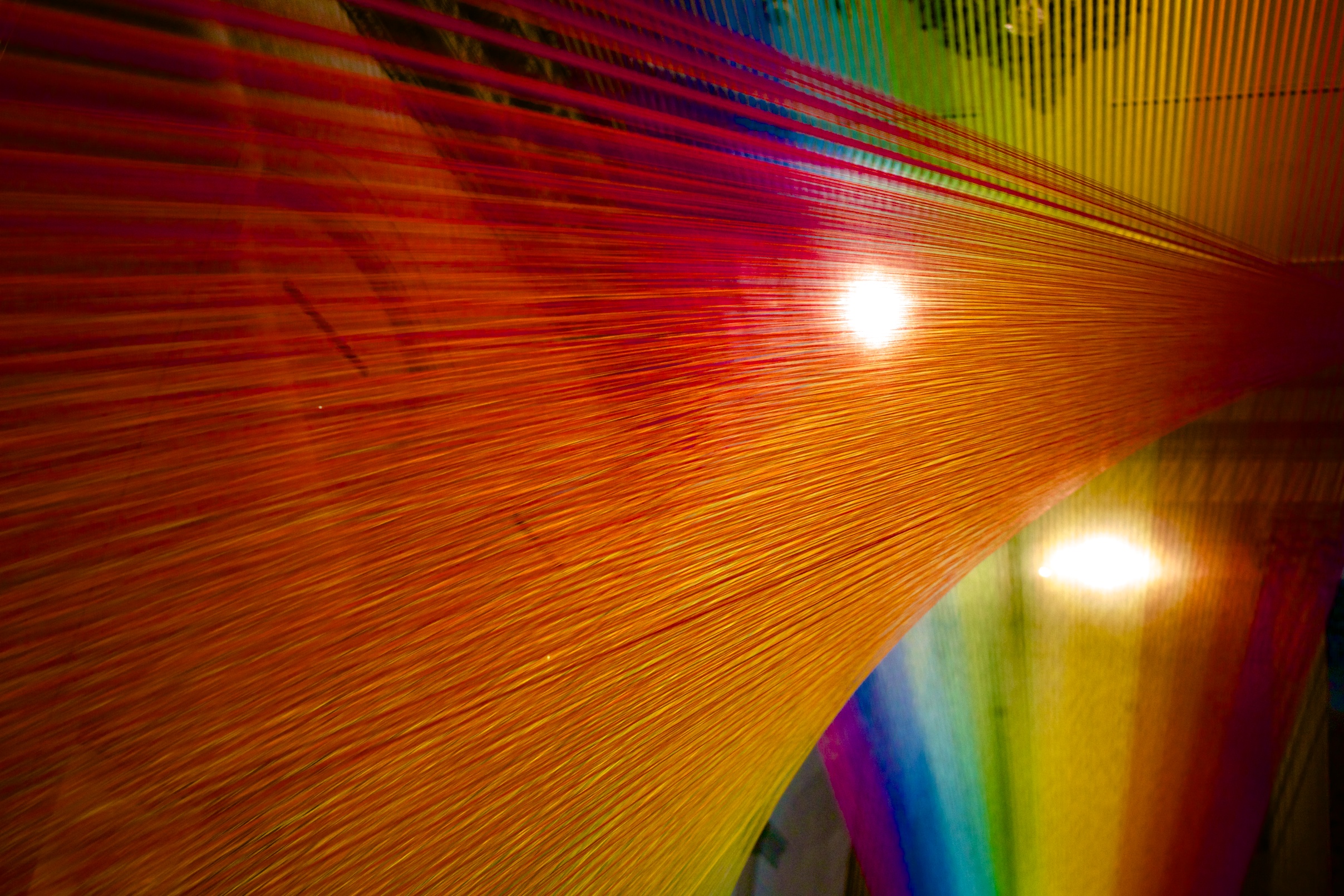 For those reading this who are not familiar with Washington, there are dozens upon dozens of museums in addition to the well known monuments. Well, these museums don’t just stay still, they are constantly rotating exhibits in and out. Some are small, some are huge, but we see them all. Today, we’re going to visit the Renwick Gallery.

WONDER at the Renwick Gallery

The Renwick Gallery, which is a branch of the Smithsonian American Art Museum, had been closed for two years for renovations. It finally reopened in November of 2015, but without its permanent collection. Instead, the entire building is focused on a single exhibit: WONDER.

WONDER is a showcase of nine contemporary artists, each of whom got a full room to work with. They each developed site-specific installations that are ingenious. The Renwick and WONDER was easily one of my favorite things about my last trip to D.C.; I love its playfulness and creativity. It really is…well, wonderful. Another thing it is, is busy. I tried to go at around 4:00pm on a Saturday and was met with a sizable line of people awaiting entry. I arrived the following morning at about 9:50 (10 minutes before opening) and was about 50th in line and that line stretched for quite a while behind me. Luckily the gallery can handle the initial rush, but I would still recommend getting there within the first hour of operation if possible.

One downside I should mention is that WONDER will only be on view for a few more months. The last four that I list below–the installations upstairs–will be closing on May 8, 2016 and the first three close July 10. The other two will be staying and the rest of the collection begins reopening July 1, so that’s something I guess. I’ve marked each header with its closing date; hopefully if you can’t see it my photos do it justice.

Woven willow saplings form the structures that make up this installation. The sense of movement is what is really noticeable–that and how fun it is to look through the big holes. I might be a tad immature at times.

It is a rainbow made of thread. Nothing else I say can do better than the photos.

What look like termite mounds are actually stacks of thousands and thousands of styrene index cards. While not much to look at initially, I found this installation technically fascinating up close.

Suspended above the staircase is what looks like crystal rods twinkling in the light. In actuality, it is LED lights and mirror-finished stainless steel programmed to flash on and off at random sequences. It is beautiful and elegant, but the super-geekiness of it being the visual manifestation of a binary algorithm sends it over the top for me. Unfortunately, these photos do not do it justice, but luckily it will not be removed with the rest.

Another installation that is mercifully staying is also totally geekarific. Yes, it is beautiful flowing fiber that had been knotted and braided, but it is more than that. It represents the energy released across the Pacific Ocean during the Tohoku earthquake and tsunami on March 11, 2011. The waves and energy of the vibrant colors do look like movement and laying on the floor is really the best way to see it (no joke, I laid there for a while…probably too long).

Yet another technically fascinating piece, what looks like a tree suspended in the middle of the room is just that…sort of. The artist found a 150 year old tree (the same age as the Renwick Gallery building) in the Cascade Mountains and made a full plaster cast of it. He then used the mold from the (unharmed) tree to make this masterpiece–a complete recreation made of half a million segments of reclaimed cedar. Following its removal it will be taken to the location of its inspiration and left on the forest floor to decompose. Too bad, I would totally put it in my house.

Folding the Chesapeake by Maya Lin (closing May 8)

The artist used glass marbles to shape rivers, fields, canyons, and mountains within the space. I don’t really see that, but I am pretty curious about how long it took her to affix all of these marbles exactly where she wanted them.

A maze made of slashed chunks of car tires, the artist began exploration of the material by walking New York City in the 80s, when tires and retreads littered the streets.

In the Midnight Garden by Jennifer Angus (closing May 8)

Winner of the creepiest installation, this shockingly bright pink room is decorated with skulls and bugs. It’s creepy enough without reading the sign which points out that yes, the bugs are all real, mostly from Malaysia, Thailand, and Papua New Guinea. What’s worse is that even the pink color is derived from the cochineal insect living on cacti in Mexico. So it’s a bug room and I didn’t linger too long.

The Renwick Gallery is located right near the White House at the corner of Pennsylvania Ave and 17th Street NW and is open every day except Christmas from 10:00am to 5:30pm. Being under the Smithsonian umbrella means that it is free of charge. The closest Metro is Farragut West (Orange, Blue, Silver lines) although Farragut North (Red line) is within easy walking distance as well.

That’s all for now, coming next will be the Arthur M. Sackler Gallery and the National Museum of African Art. There will also be plenty of info coming on visiting D.C., but if there’s anything specific you’d like to read about let me know in the comments.