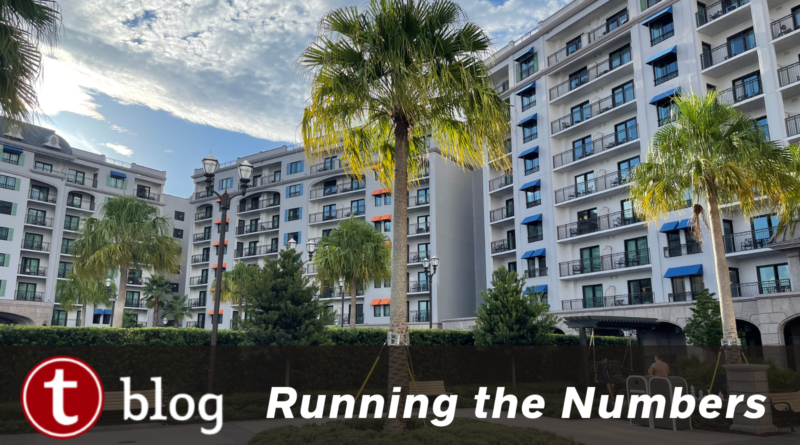 It’s pretty common advice not to buy a timeshare that you wouldn’t want to stay at, and for Disney Vacation Club that applies to choosing your home resort.  But there’s good advice, and then there’s what people do. Let’s be honest, I think most DVC owners have thought about having trade-in access to Stormalong Bay when making their purchase, even if they weren’t buying at Beach Club — I certainly did.

Today we’ll be using the 2022 point charts to look at how much trading power your DVC purchase brings to the table, which is good to understand if you’re only thinking about buying and haven’t put your money down yet.  We’ll be doing the math for the common calculation based on your home resort that shows what you can get for the points that you buy, and in a future article we’ll take a less traditional look that ignores the initial purchase cost and considers what you get for the dues you pay.

Warning: lots of nerdy data-diving ahead.  If that’s not your gig and you just want an overview, feel free to skip ahead to the conclusions.

The Seasons of DVC

Three factors go into how many points are needed for a particular DVC reservation: the specific resort, the type of room, and the “Season” that the night you are reserving falls into.  Before we get started with the numbers, let’s dig into these seasons a little to help get an overall picture of demand.  Take all the descriptions below with a grain of salt: they’re meant to help you to create context but not to provide every last detail.

Season 1: Sep 1-Sep 30.  This season generally requires the fewest points, and is the most active month in the Atlantic hurricane season.  It’s hot, it’s sticky, it thunderstorms almost every afternoon, and schools are back in session to boot.

Season 2: Jan 1-31, Dec 1-14. Two things apply to the weeks here: the first is that almost no schools have holidays or breaks, and the second is that the weather may be quite cold, at least on the Florida scale.

Season 3: May 1-June 10, Dec 15-23. This is a transitional season. Many colleges let out around the beginning of May, but elementary schools don’t begin to go on break until late May and early June. Visitors who are not tied to the school year will often target this sweet spot to take advantage of the early summer weather and the [relative] lack of crowds.

Season 4: Feb 1-15, Jun 11-Aug 31, Oct 1-Nov 22, Nov. 26-30. This season has more days than any other, accounting for about 5 months in total.  It encompasses all of the school summer break season, as well as the period in October and November when visitors may be trying to avoid crowds while still capturing some of the summer weather.

Switching Seasons Within Your Home Resort

If you purchase DVC directly from Disney, you’ll be advised to buy points based on the time and length of your typical Disney World vacation.  If you come for a week in May every year and stay in a 1-bedroom Villa, you’ll be guided to purchase however many points are needed to do that at your home resort. While Disney can — and does — change the number of points that are needed for particular room types and dates, there are limits on how drastic the changes can be in any one year.

What if it’s you that changes?  Maybe your kids are all off to college and that early May period opens up for you; how much could your length of stay go up or down?   The chart below shows data to answer precisely this question for Studio rooms at each resort; it’s based on taking a week’s worth of points in Season 4 and seeing how many days you could get for those in points in a different season (but still in the same room category and resort).  Don’t stare at it too hard: there’s a ton of bars and the answers we want aren’t coming from a close look.

Example calculation for the data in the chart above: An Animal Kingdom Villas Value Studio in Week 4 costs 69 points. In Season 1, this room is 7 points per night from Sun-Thur and 10 points a night on Fri & Sat, so you could reserve 9 nights (+2) with the same 69 points.

When we look at this chart, all room categories from the same resort (for instance Standard, Lake, and Theme Park views at Bay Lake Tower) have the same coloring, and results in each season have been ordered according to increasing values in Season 1.  All stays start on Sunday night for consistency. So a high level take lets us see quickly that:

There doesn’t appear to be any rhyme or reason to how big the changes are, other than saying that the farther away you get from Season 4 the bigger the difference is.  I saw this same lack of pattern when comparing 1-Bedroom, 2-Bedroom, and 3-Bedroom Villas, and I won’t waste your time going through the data.

One thing that I did see is that if we compare the numbers for each room type within a single season, they’re pretty similar . Although the ranges tend to tighten up as we move from Studios to 3-Bedrooms in the chart below, the median values are fairly consistent. You’ll get about 2 extra days if you move all the way over to Season 1.  And if you’re visiting in the busiest weeks of the year, you’ll get only about 5 days for those points instead of 7.

Taking Your Points to a Different Resort

If you have enough points for a week at one resort, how many days more or less will you get if you trade for a room at a different resort?  The number of combinations here is staggering, so I’m going to put down some ground rules.

First, we’re not going to switch room types: if you started with the points for a 1-Bedroom then you’ll be trading into a 1-Bedroom elsewhere.  Second, we’re only going to look at Season 4.  Why only Season 4?  Well, this article is not about precision calculations, it’s about getting feel for what happens with different types of trades.  Since Season 4 has by far the biggest slice of the pie, it’s the one that encompasses the largest number of potential trades as well; that’s going to give us the most useful overview.  If you’re trying to cross both space and time, then once we’ve calculated the shift between resorts you can use the within-resort shift to guesstimate on your own. (Or ask in the comments – I just don’t want anyone to fall asleep in an endless series of charts.)

Once again I’m going to warn you — don’t stare too hard at this chart.  I mean sure, feel free to enlarge it (just click) and scrutinize in detail if you really want to, but the takeaways can be seen at a high level.

I’ve sorted each axis by points required to create a ranking in terms of trading power (and whoa, I had no idea that the Poly studios were at the absolute top of it).  This lets us use the diagonal to see some “free-trade zones” where a few room categories are pretty much interchangeable.  The biggest one here contains Beach Club, Boulder Ridge, Copper Creek, Bay Lake Tower (Standard View), and Boardwalk (Boardwalk/Pool View).

Here again we see that free-trade zone in the middle, although Bay Lake Tower (Lake View) has been replaced by Animal Kingdom Lodge (Savanna View) for 1-Bedroom units.

There are many fewer 3-Bedroom units; some resorts don’t have any at all and those that do don’t offer them in as many categories as the smaller rooms.  Animal Kingdom, Saratoga Springs, and Bay Lake Tower are the only resorts to offer two different 3-Bedroom categories, and only 5 other resorts offer these “Grand Villas”.  Although I’ve marked out a couple of free-trade zones, it can be difficult to reserve these rooms because there is very little inventory, and that can mean no trading.

If we want to know the trading rank for Studios, that’s no big challenge — we can look at the chart that’s just for Studios above.  But we’re looking for something that does a better job of telling us how the resorts stack up in general.  It seems obvious that we should combine the rankings we got above in some way, but how? Here’s what I did.

First, I stuck to Season 4.  Unlike the analysis above where I would have needed one chart per season, there was a reasonable way to combine all the seasons to come up with an overall ranking by room type.  The problem is that some of the seasons have many more days than others, and intuitively more days should carry more weight when thinking about some kind of score.  I could have gone with a weighted average, but in the end I settled for just making sure the ranking was reasonably consistent across seasons so that I could go with the simple math.

Second, I decided to omit the 3-Bedroom units from consideration.  These are such a small portion of the inventory that I didn’t want them to have an outsized effect on the results, and the fact that many resorts didn’t even have 3-Bedroom units made it hard to approach these.  Simplicity says … chop chop.

Third, I removed all room categories (Standard, Preferred, etc.) that didn’t appear in each room type (Studio, 1-Bedroom, 2-Bedroom).  Interestingly, that meant that the Poly could not appear in the rankings since we lost both the Studios and the Bungalows.  The other units that were excluded were the Copper Creek Cabins, the Saratoga Springs Treehouses, and the Riviera’s “Tower pod” Studios.

Now that I had the same number of overall categories in each type, I ranked from 1-19 within each type.  Since we saw that there were groups of units within each type that were essentially equivalent, I assigned those ranks as a tie using the midpoint of each group.  After that, I simply averaged the ranks for each unit.

I added the points for the 2-Bedroom units in here as a reminder to us that the shape of the rank distribution isn’t the same as the shape of the points distribution — twice the rank doesn’t mean twice the points.  But we can see that the Zones that we created in the overall rankings by assigning ties based on the free-trade zones for each type are reflecting underlying clusters in the points.  In Zone A, only 7 points separate all four units, and in Zone B it’s again only 7 points.

Although they don’t cluster quite closely enough to be called a Zone, The Grand Floridian, Bay Lake Tower, and the Riviera are definitely holding down a top tier.  Based on its placement in the individual rankings, the Poly would be in this tier if it had been included in the overall rankings. The Treehouses would be squeaking in just underneath AKV Savanna, at 329 points.

Animal Kingdom Villa’s room categories run the gamut, with the Value rooms on the bottom of the stack and the Savanna rooms just missing the top tier.  The Concierge rooms should arguably have been excluded here, since even if you own at Animal Kingdom Lodge these rooms can be very, very hard to reserve.

What resort do you want to trade into?  Why do you think there’s only a single week in Season 5? Are you surprised by these rankings? Let us know in the comments!

5 thoughts on “What’s The Trading Power of Your DVC Points?”