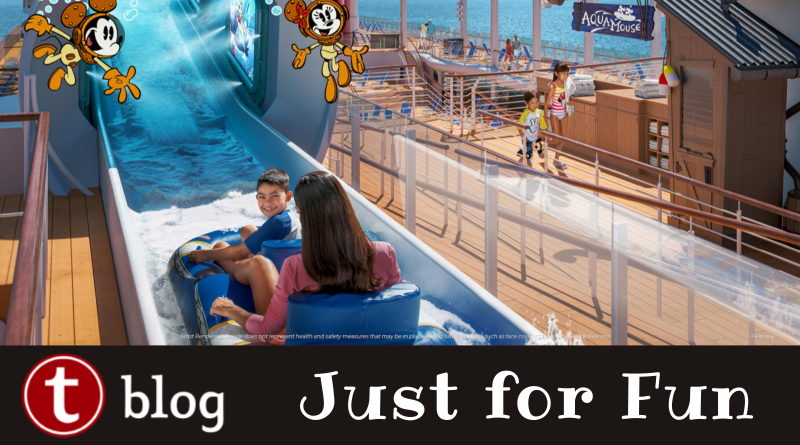 There was a lot of information released last week about the Disney Wish. While the video presentation scratched the surface with the big-name announcements, press releases after the fact provided a wealth ofadditional information. Still, when you look on Disney’s web site, there’s a lot of places that are labeled “More Magic Coming”.

The ship I’m most familiar with is the Disney Fantasy, having spent a little over a month at sea on her over the past few years. I went deck by deck, comparing the snazzy looking deck plans on the Disney Cruise Line web site, the stateroom deck plans for the Wish, and the deck plans for the Fantasy to try and figure out what might be going in each mysterious area. My thought was that there are certain items that the new ship has to have (like a Guest Relations desk), and things that would be surprising not to have (like a place to get your photos), plus some things that would be nice to have but wouldn’t be a deal-breaker (like a juice bar in the fitness area). I created a list of what is included on the Fantasy that is not yet found on the Wish, compared deck plans and available space, and came up with my list of possibilities.

Full disclaimer, I have no inside knowledge. I haven’t snuck into Imagineering or on board the ship to look around. I’m not cybersleuthing through permits or meeting people in dark alleys for the exchange of paperwork. These are just my guesses — and it will be interesting to see what comes out in the next round of updates.

You can read part 1 of this series here, where I cover decks 2 through 6. Decks 7-10 are just staterooms, but I did want to note one interesting sight spotted on the deck plans — the only laundry area appears to be on deck 8, with a . . . whimsical name for a washing machine repository? 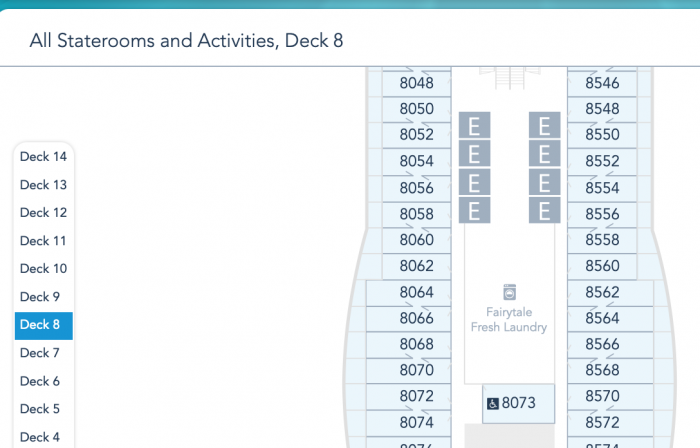 With the Wish only doing 3-night and 4-night cruises, demand wouldn’t be quite as high as it is for ships that do 7-night cruises or longer. With these cruises likely not having a formalized formal night (just an “optional semiformal night”), there’s less need for irons and ironing boards. I personally am fine with the one laundry room, especially since it seems to be pretty decent sized. I may be alone in this, however, and I gladly own that, so feel free to share your love of laundry rooms in the comments.

Meanwhile, on with the rest of the ship.

After my daughter’s first cruise on the Fantasy at age 2, her catchphrase was “Deck 11 is a little different”, and she’s right. On the Dream class ships, Deck 11 is combination pool and dining deck, and then it had the adult spaces thrown in, plus the fitness/spa area. Instead of trying to do everything all on one deck, the new design for the Wish seems to spread things out  in more logical clusters. There’s a few things we can tell for certain about deck 11, and some things that will be pure guesses.

Deck 11 aft will be the non-sit-down dining area known as Cabanas on the other ships. Will it retain the same name? Who knows. Will it still be a buffet? If I were planning it out, I’d take a buffetoria model where you follow your plate down the line, indicating what you want placed on the dish, and then get it at the end so you can take it to the table. Then, in times when there’s less concern about illness, you could remove the “windows” to allow access to the food served traditional buffet style. And this isn’t just a COVID-era precaution, but could be done whenever there was a risk of illness, such as in flu season.

Going forward from the dining area, there’s a “More Magic Coming” area on the port side. I would be surprised if this wasn’t food-related in some way. A gourmet coffee bar? Coke Freestyle machines or other beverage stations? But it could be as simple as a dedicated place for hand washing stations instead of the shoehorned in versions that exist on Disney ships now. I’m thinking that the two matching areas on both sides of the ship would be likely to be those beverage stations, but yes, I am holding out hope for those Coke Freestyle machines.

Going slightly forward, right before you get to the pool deck, there’s two “More Magic Coming” locations, one port and one starboard. Things that make sense to fit there would include an up-charge ice cream/candy shop like Sweet On You/Vanellope’s. Personally, I’d like to see a really good pizza place in the other one with late-night hours. (And please let it have Mickey pretzels!) It might also be the location for the all-you-can-eat soft-serve. Any ideas what you’d like there? 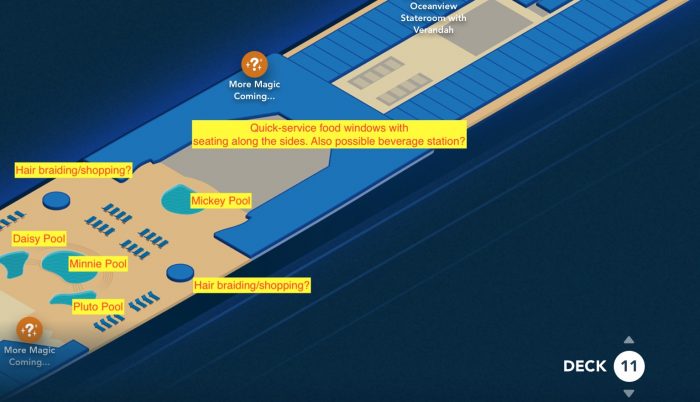 Going forward some more, we see the series of much smaller pools (Mickey, Minnie, Pluto, and Daisy). The round areas on either side of the deck feel like they could be the hair braiding chairs or possibly a small shopping location, selling pool necessities. On a dream list, could you imagine if those were free-to-use large human-sized dryers? Jump out of the pool, take a 2-minute spot in the walk-in dryers, and not have to drip and freeze all the way back to your stateroom! (This is really unlikely, but a gal can dream, right?) The square-U-shaped area forward of that will need to be the counter-service options. I personally love the idea that this would have both place to eat and seating.

Because Senses was moved down to deck 5, and the adult areas were moved up, the remainder of this deck ends up being staterooms. One common complaint was the challenge of having kids wandering through the adult area because they needed to be able to get to the elevator to their stateroom. When I saw the adult areas moved, that was the first bit of delight I had when viewing the Wish deck plans.

Speaking of adult areas, not much to tell about deck 12 aft at this point. Disney was pretty clear about the changes to the adult fine dining locales, so aside from waiting to see if the Chocolate Soufflé makes its triumphant appearance, not a lot of questions right now. The one curious area is the Hero Zone, which is described as sports court, playground, game floor, and movie theater. Part of me feels like this will be a cross between The VOID, ideas brought up for the Play pavilion at EPCOT, and some aspects of the old sports deck. Some things that are popular atrium events (like Jack-Jack’s diaper dash and Chip-It Golf) can be moved here. The stateroom plans do show that there should be a basketball half court. 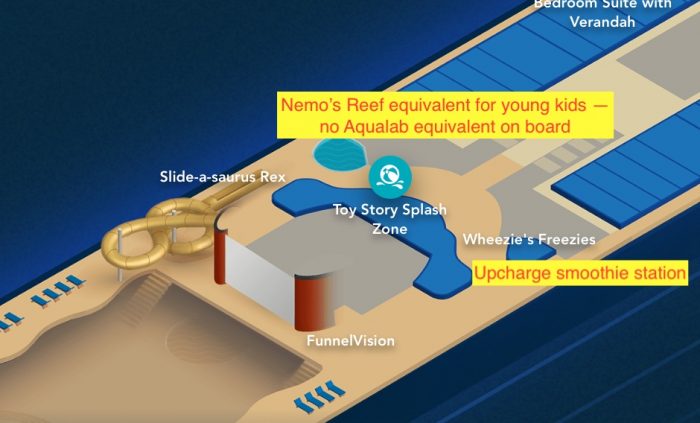 Continuing forward on deck 12, you’ve got the Donald and Goofy pools, the Slide-a-saurus Rex, and the Toy Story Splash Zone. From the description, the Toy Story Splash Zone will akin to Nemo’s Reef, focused for the toddler and young elementary sage group. Sadly, it doesn’t appear that there will be an older kid Aqualab equivalent on board. Wheezie’s Freezies is most likely the uncharge smoothy station. Beyond that is staterooms. 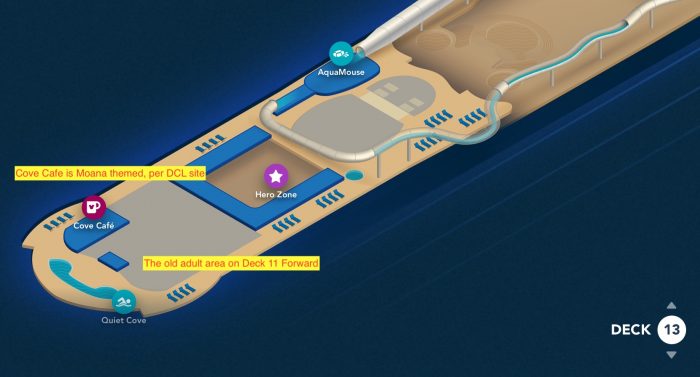 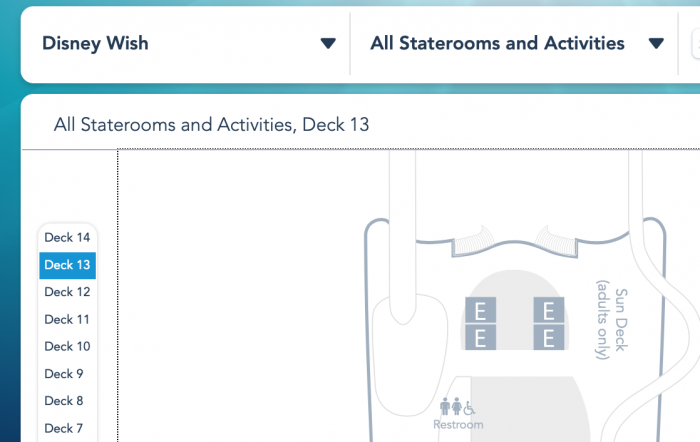 Although I’m sad that we won’t have Goofy mini golf on board, having a true adult retreat aft on deck 13 really makes for a fantastic design change. Although I’m not necessarily a big fan of IP everywhere, I am a bit happy that Cove Cafe will be Moana themed. Aside from the entrance for the AquaMouse and the viewing gallery for the Hero Zone (which, if I were designing it, I’d have it only accessible from the inside on deck 12! and the AquaMouse accessible only through a dedicated entrance set of stairs), this whole back area of the ship will be a great place for adults to get away without foot traffic of kids going through, especially all the way aft. Deck 13 midship is open to the decks below, and deck 13 forward is staterooms/concierge amenities. 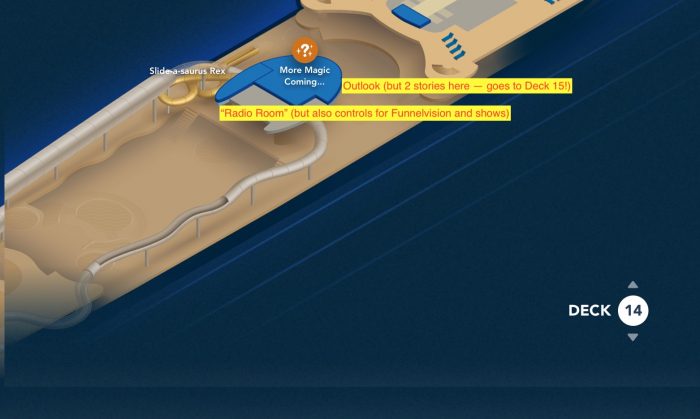 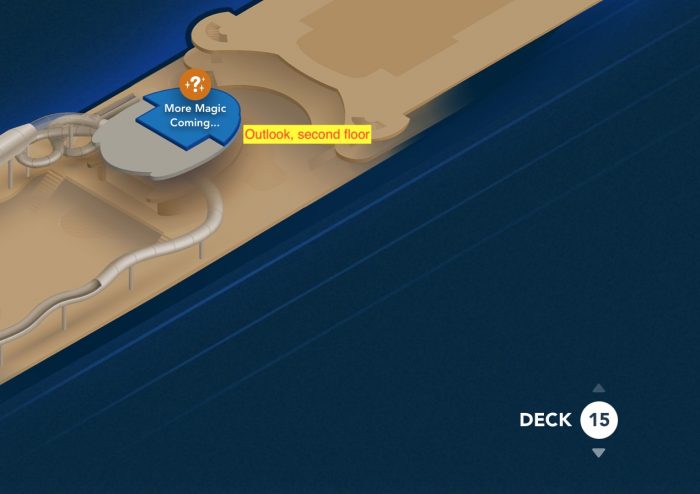 Not a lot to discuss here — on the Fantasy, aside from the Radio Studio (which also likely controls the Funnelvision and provides support for deck party shows), this area is a single-deck spot known as Outlook. Typically, there’s not a lot going on there that brings people in. Friends of Bill W. meet there. Religious services are held there. Occasionally there’s been toddler playtime there. Some groups host meet and greet type of events there. It’s basically an all-purpose setting that is used occasionally. So why on the Wish is it now two decks tall?

Although other things will still use this space, I can imagine Disney marketing this as a wedding chapel at sea and decorate it accordingly to really make this a dream wedding venue. (Leftover stained glass from the atrium? Haul it on up, folks!)  Although it’s still a cruise (and so that’s expensive), and it’s still a Disney wedding (also expensive), there’s big bucks to be made in destination weddings even for larger groups. Having a two-deck-tall wedding chapel at sea with beautiful views just seems to be a logical fit for how to best market that place and take a random meeting room into a money maker. A Cinderella wedding event on the Disney Wish. You know that’s going to be on someone’s “Wish” list.

And there you have it — I have no doubt Disney has more exciting reveals over the next year as the Disney Wish gets ready for her maiden voyage, and I’m very curious to see what all she has in store. In the meantime, what do you think about these theories? Anything you want to speculate on? Things you love or hate? Think I’m going stir-crazy without sailing on a cruise in over a year? (I’ll answer that one — YES.)

Let me know what you think of these ideas, and whether or not you do laundry on a Disney cruise, in the comments.