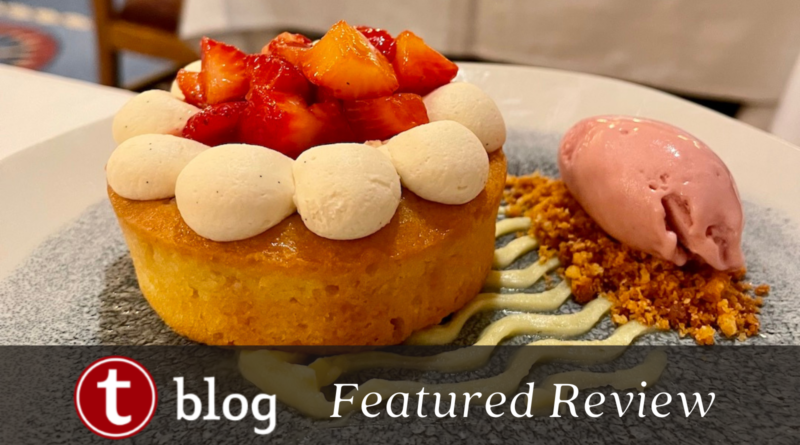 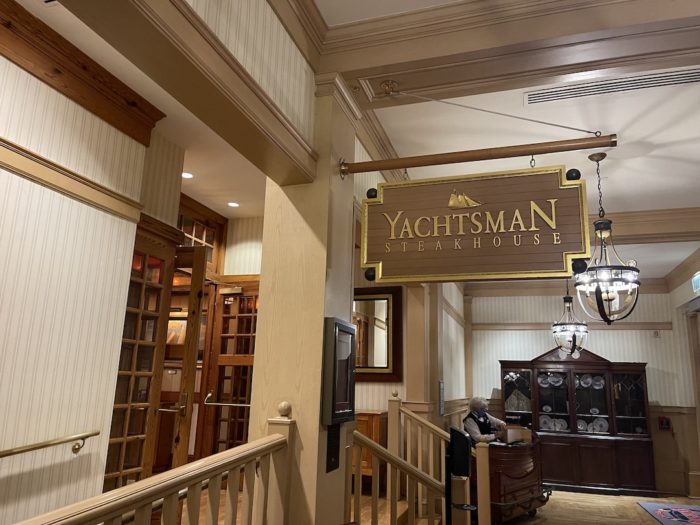 Obviously, the Yachtsman Steakhouse is known for its steak, but it’s also known for seafood and overall fine dining as a signature restaurant experience. 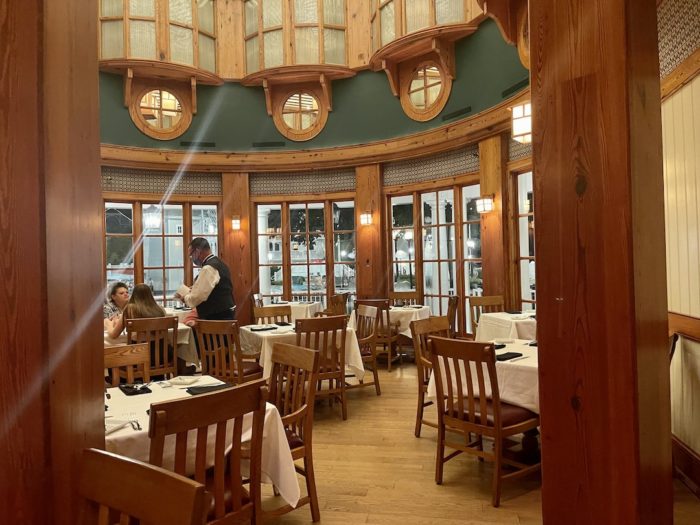 Expect knotty-pine beams, windows and high ceilings, and white linens a stone’s throw from the Yacht and Beach Club’s Stormalong Bay and next door to the Crew’s Cup Lounge. 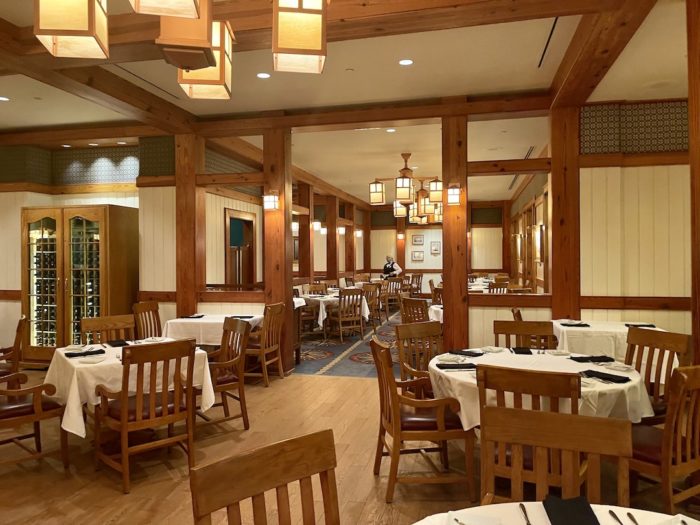 Our park reporter Chrissy visited the Yachtsman Steakhouse upon its reopening on August 5. However, the opening day experience wasn’t that great and she wanted to give it a second shot. So, she dropped by again on August 13th to give it another try.

The Yachtsman Steakhouse is only open for dinner with service beginning at 5:00 P.M. and ending at 9:30 P.M. As a signature restaurant, it belongs to the more expensive tier of restaurants. Annual Passholders can take advantage of a 10% discount. 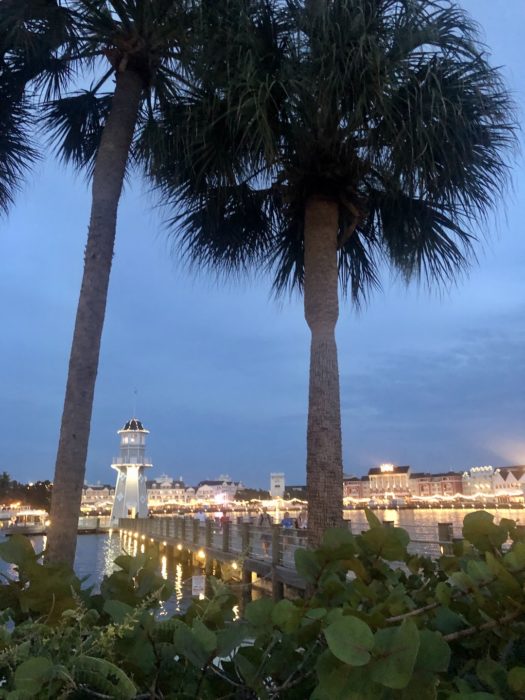 Advance Dining Reservations are encouraged and can be made on the My Disney Experience app; but if you’re already within that 60-day window, consider using the TouringPlans Reservation Finder. Guests can also join the walk-up list on the Disney app as well. 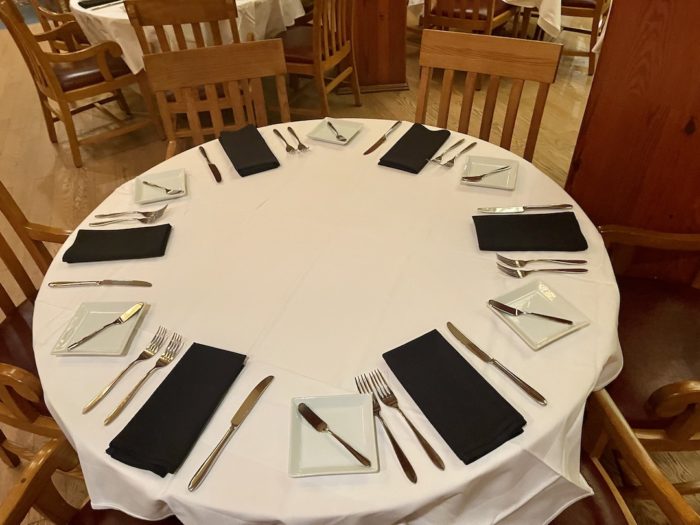 Guests are asked to adhere to the minimum dress code requirements of khakis, slacks, dress shorts, and collared shirts for men. Sport coats are not required. Also, jeans are permissible if in good condition.
Women are asked to wear capri pants, skirts, dresses, or dress shorts; and again, jeans may be worn if in good condition. Guests shouldn’t wear tank tops, flip-flops, swimsuits, swimsuit cover-ups, cut-offs, torn clothing, t-shirts with offensive language and/or graphics, or hats for gentlemen. 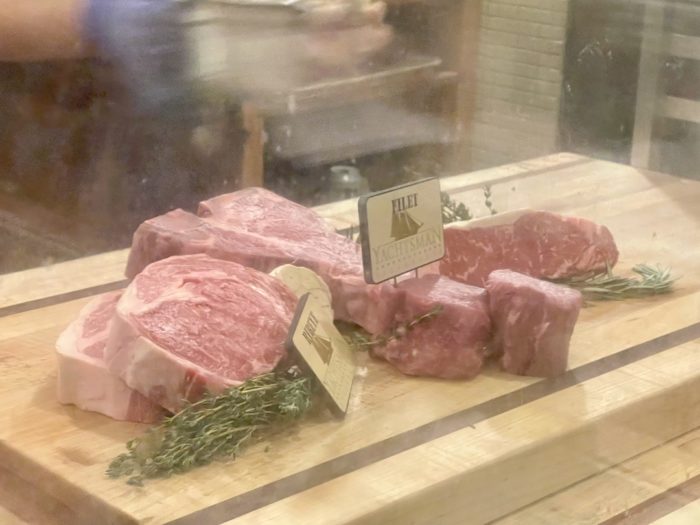 Yachtsman Steakhouse’s Porter House is aged 21 days while all other cuts are aged 7 days. Chrissy’s server told her that the entire kitchen staff, except for someone in the dry-aged room, was newly hired from outside Disney. The entire kitchen from pre-closure days is gone. This is something Chrissy wishes she had known the first night of reopening as it explained a lot.
She also returned for a second visit since her first dinner was so late in the day on the 5th. By her 8:45 p.m. reservation, the staff was obviously exhausted and her server didn’t know any of the steak sauces, couldn’t remember the name of the cherry rolls, and wasn’t clear on the side dishes. Upon learning that they had little to no time to train, none of those things were her fault.
However, Chrissy’s server on the 13th was far more prepared; and when she mentioned that she had visited on the 5th, her server winced and said she knew opening night was very rough.
With that said, let’s get to both of Chrissy’s experiences and Yachtsman Steakhouse’s menu. 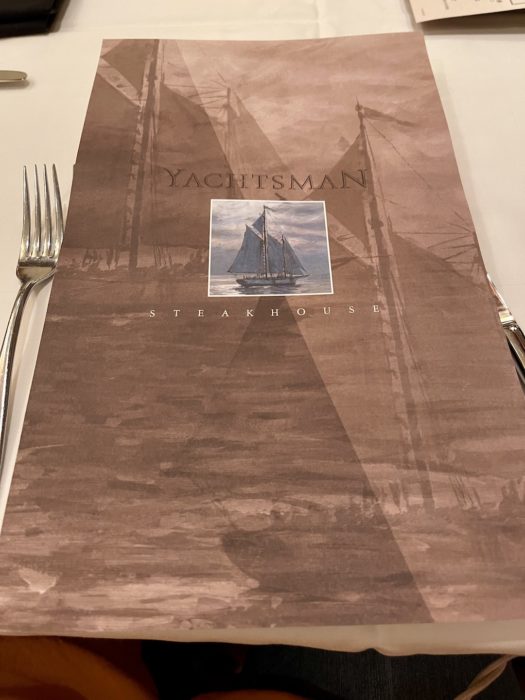 Like most restaurants at Walt Disney World, Yachtsman Steakhouse offers allergy-friendly and plant-based menus, a kid’s menu, and an extensive list of specialty drinks and alcoholic beverages. 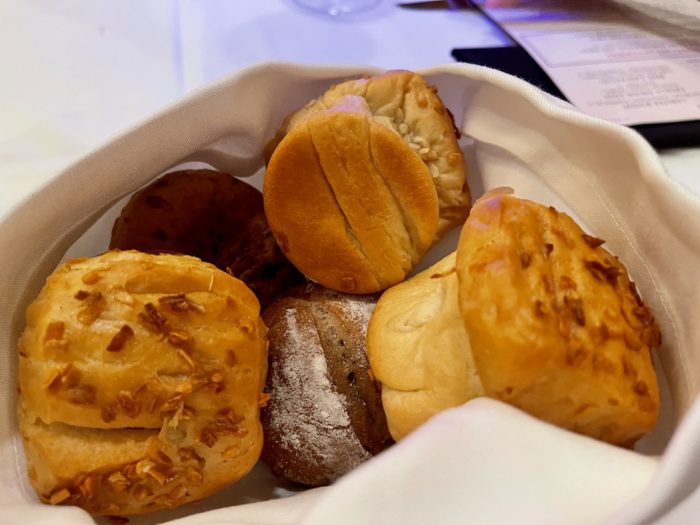 The pull-apart onion rolls return in all their prior glory! They were warm, savory, and delicious. Also, the new Cherry Multigrain rolls are splendid! While they have bits of cherry, they’re still a savory bread for sure – the dough has all the hallmarks of a yeasted bread with some kind of maple syrup or a molasses or treacle that gives it a deep flavor. In fact, Chrissy claims she would pay the price of the filet for the recipe on this one. 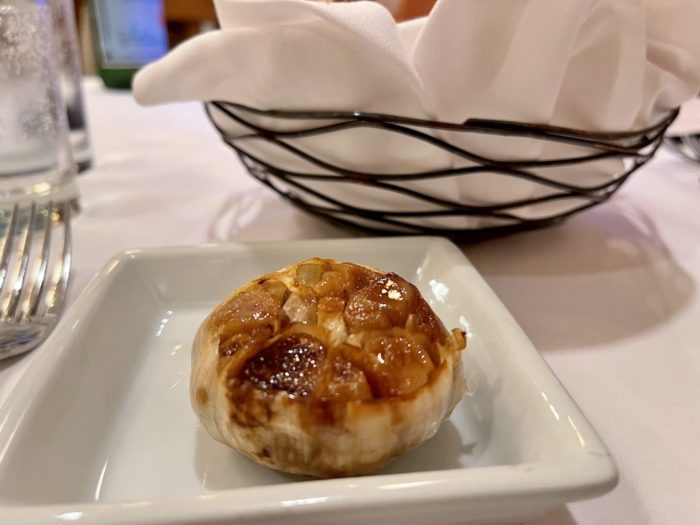 Bread service is set with a bulb of roasted, sweet garlic, and a dollop of butter with coarse, pink salt. It doesn’t sound like cherry rolls would go with roasted garlic, but they do. Very well! 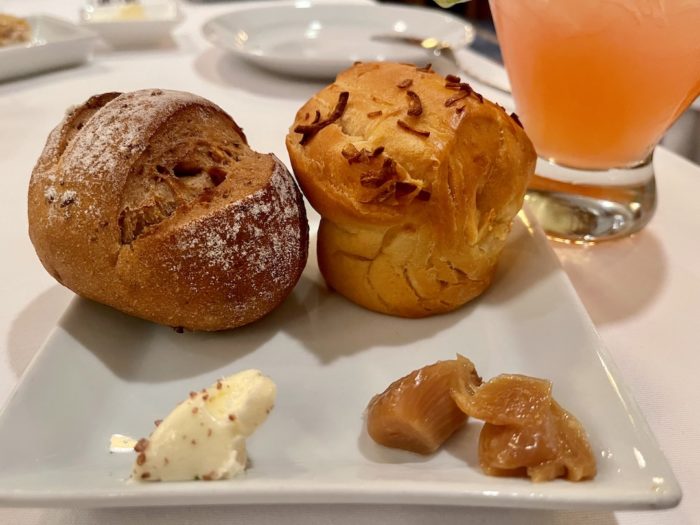 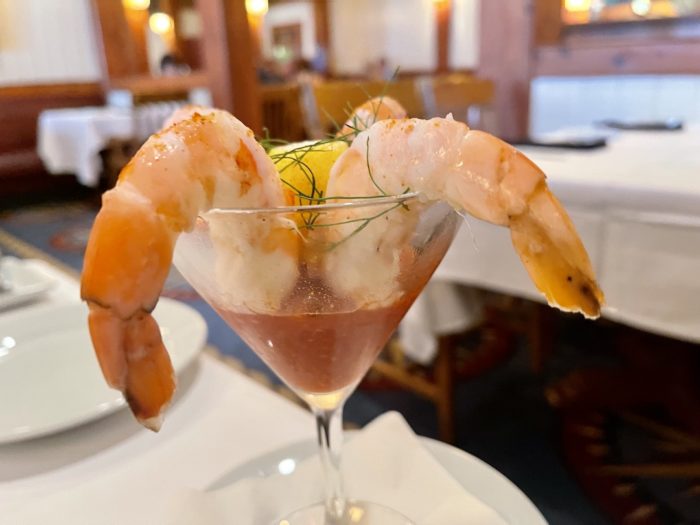 The martini glass of shrimp and cocktail sauce is the hallmark of any steak/seafood house, and this one is stunning to look at and disappointing to eat. When you’re paying $5.25 per shrimp, you expect a few perfectly cooked bites and this wasn’t it. The shrimp was overcooked and mealy. We left 2 of the 4 in the glass.
Lobster Bisque – $16.00 (First Visit) 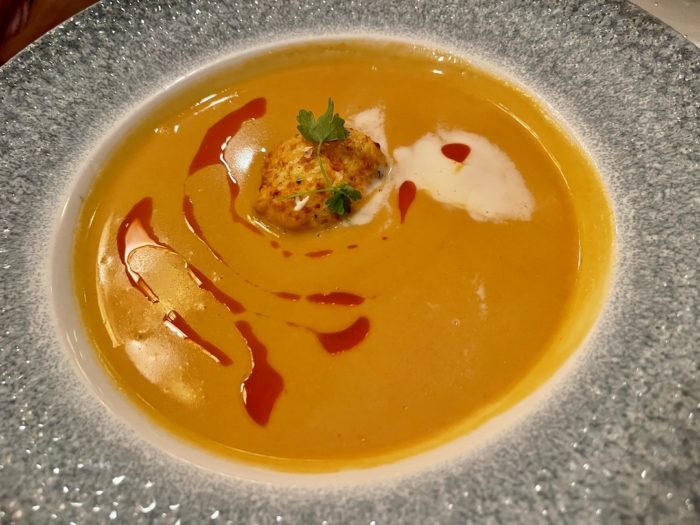 A good example of a classic. It was pretty, it was creamy, it was nice – not steaming hot as it should be, but still fine.
Steakhouse Wedge Salad – $15.00 (Second Visit) 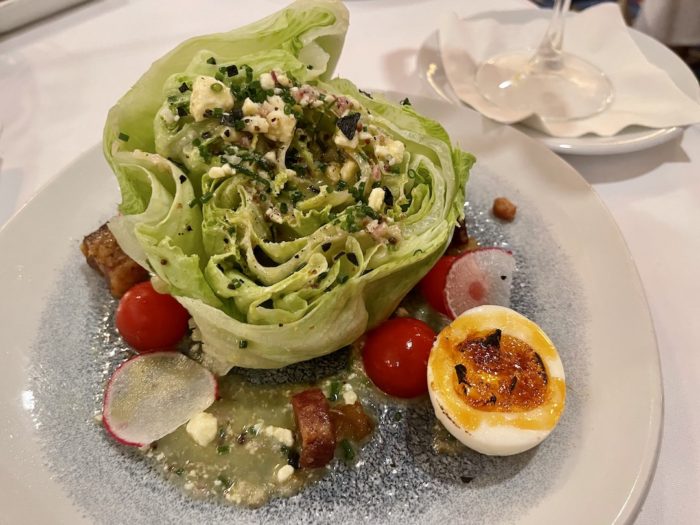 So gorgeous, but so much onion. Too much. The design is dead on- especially the scorched egg. The candied bacon was the wrong side of done or had been sitting out too long and was just overly chewy. The dressing was unusual in a not-great way and threw off the whole plate. 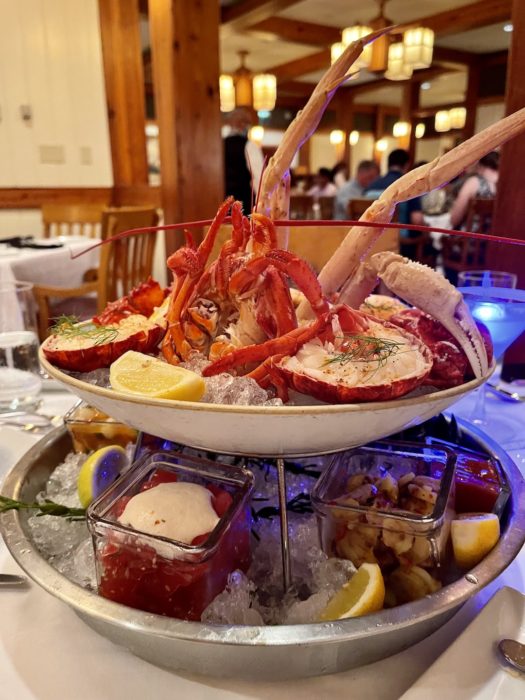 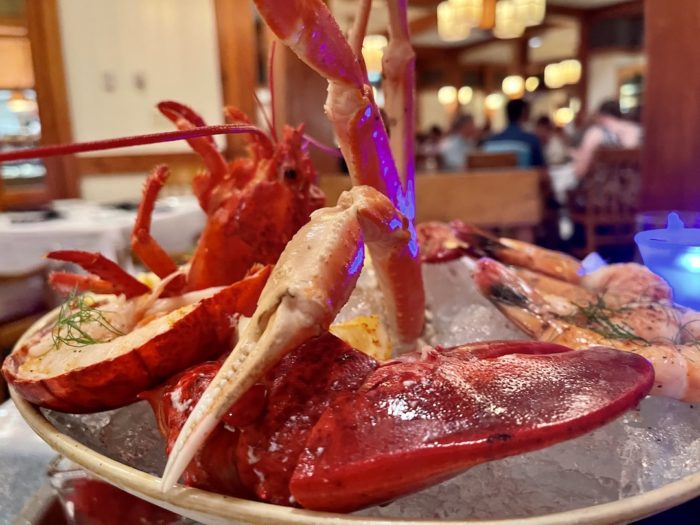 The good news? The lobster and crab were outstanding! So fresh and perfectly cooked – delicate and beautiful! They only needed a drop of lemon to have Chrissy and Ivonne fighting over the top layer of the tower. 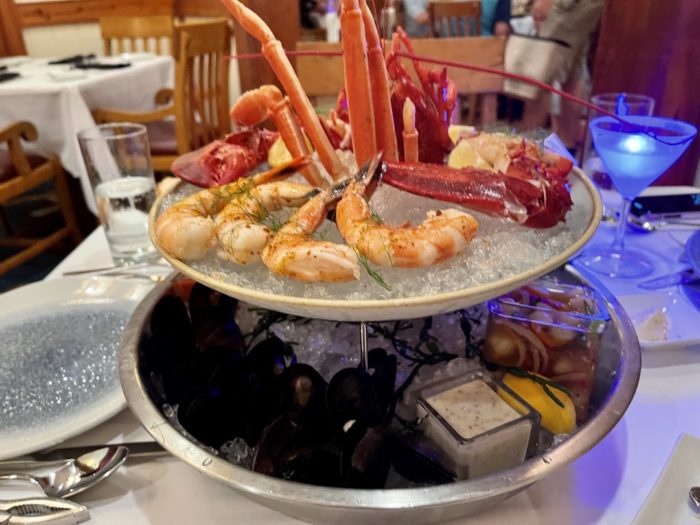 The exception? The shrimp. They were the same overcooked, mealy shrimp that Chrissy had with the cocktail. Nope. Ivonne ate the Tuna Tartare and loved it. The Mussels were fine and plentiful but not the rock stars that the lobster and crab were. The scallop ceviche was perfectly set, plentiful, and tasty. 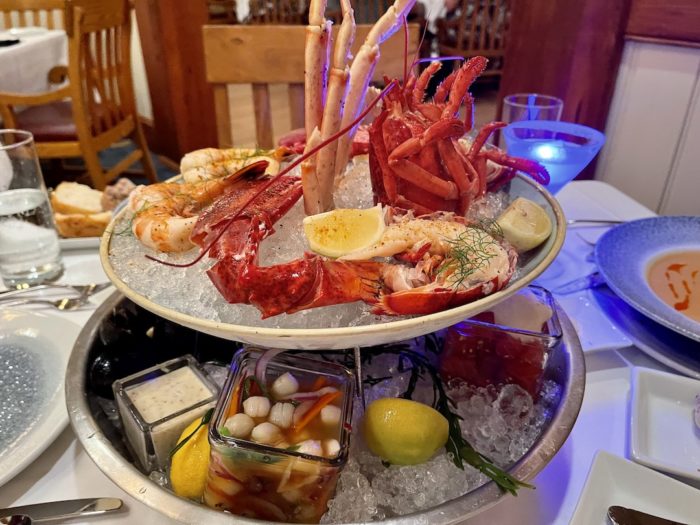 Also, the Charred Octopus Salad was actually a Charred Octopus and Potato Salad and had us cracking up. You think you have a square cup of octopus and then, bam! You get a bite of potato. The octopus was good, but the salad was just so odd and seemed like a filler rather than a spotlight. Admittedly, neither Chrissy or Ivonne usually enjoy fussy seafood, but a smaller portion of a perfectly prepared sea critter is far better than a heap of overly manipulated seafood and starch. At least that’s how we feel about this price tag. Do less and make it better? 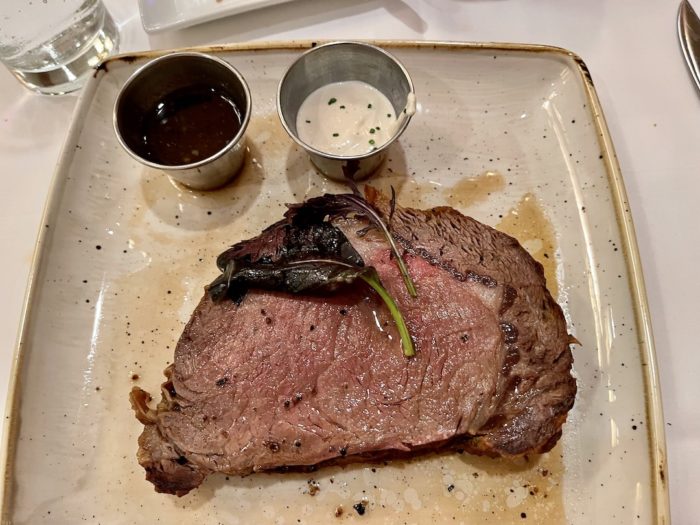 It was clear to Chrissy from the moment her server placed this on the table that it had been sitting in the window for a bit. It was just warm and a skin had formed on the sauce.

The burnt ends (the best part) were dry and tough – another cue to the amount of time that elapsed between the window and her table. For this kind of money, you expect a perfect cut of meat. This is the dish that had her the most disappointed as she’s had it in the past knew how fantastic it used to be. Both she and Ivonne only had two bites each let it complete its decomposition. 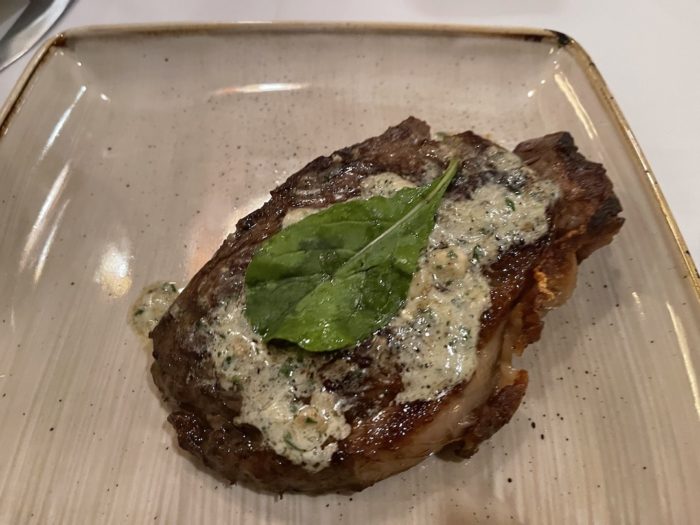 This steak was properly cooked and enormous, but overall just wasn’t that great and the temperature was off. While she would consider it fine, who wants to pay $59.00 for “fine”? The one bright spot? The perfect Blue Cheese-Shallot Butter.

Chrissy also got the Potato-Leek Gratin as her side, and while the flavor was good, you could tell from the matte appearance and lack of sheen on the crust that it had been sitting out. It was very frustrating and she can only assume it’s because they’re short-staffed? Ugh. 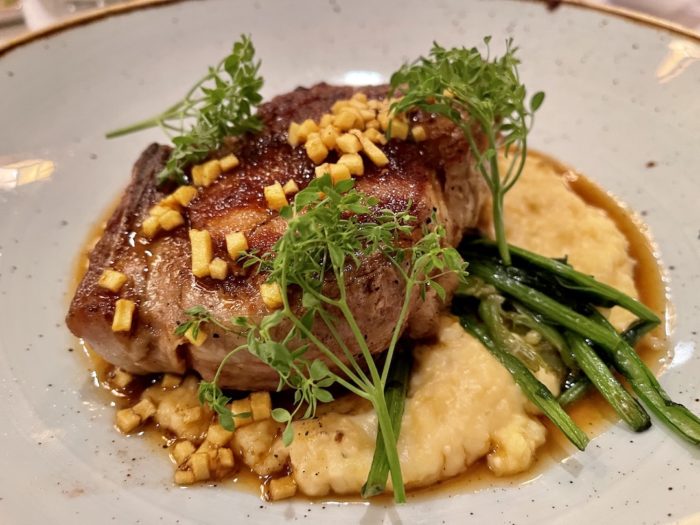 Enough for Fred and Barney to share and still have leftovers! But, would they want to? Meh. Maybe if Mr. Slate was paying?

So the flavor was good; but again, the temperature wasn’t right and that put a damper on their excitement for the dish. This is far too much money to be served something you’ll be ambivalent about. 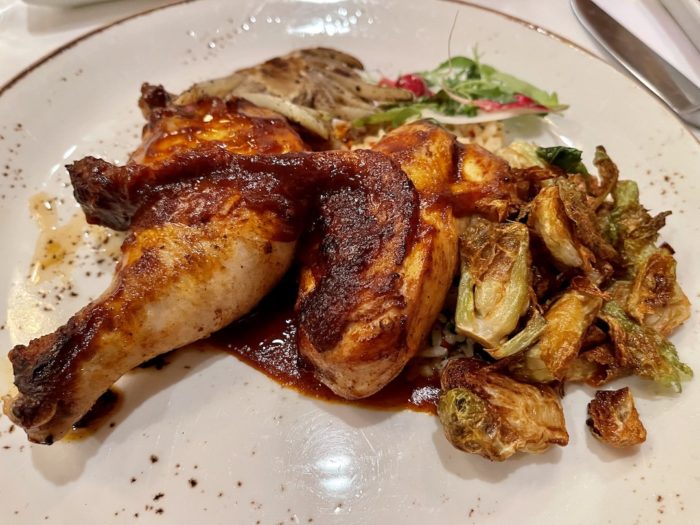 This dish had such an odd aftertaste. It was a large serving and plated in a pleasing manner, but if it doesn’t taste good, who cares? It was also plated long before it was served. 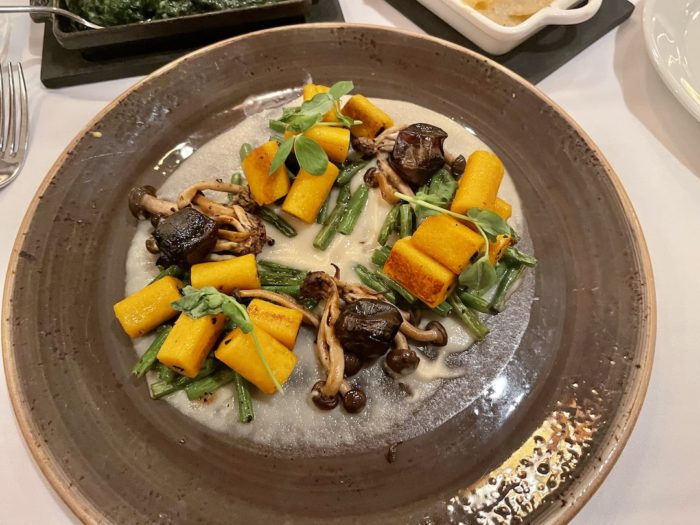 Outstanding!!!! The dumplings were sweet and savory and chewy! It, too, had been sitting out but it was still so good! Chrissy says she would get this again if she ever goes back. The dumplings were puffy and properly cooked and it was so nice to have a plant-based dish that wasn’t cauliflower or jackfruit! 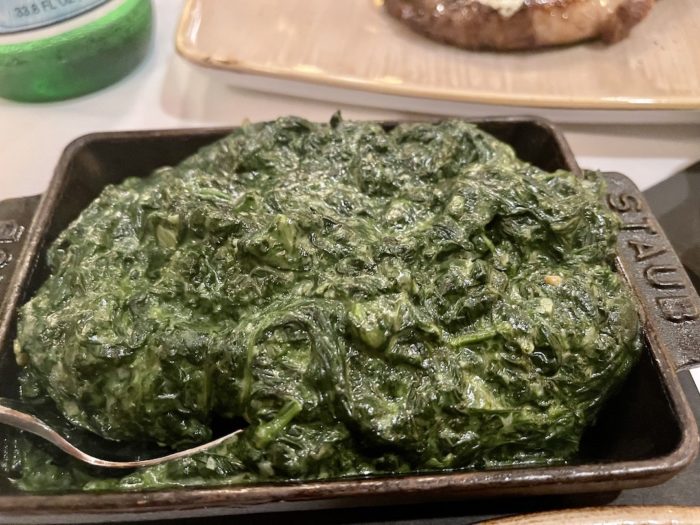 Decent and a good serving. It would have been better if it was hot, and it doesn’t even come close to the Canadian Cheddar Creamed Spinach at Le Cellier (that’s also $10.00). But it’s fine. 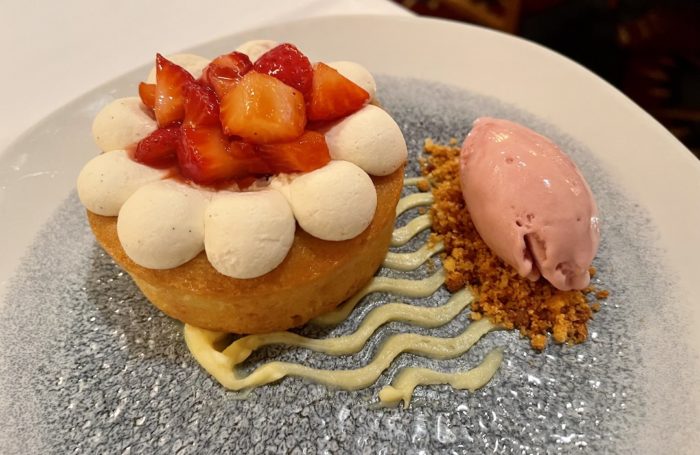 Simple and lovely! The shortcake is perfect and springy, and the chantilly cream is puffy, creamy, and not too sweet. The tiny dollop of strawberry gelato is thick, and just sweet enough to balance the strawberries. Love! 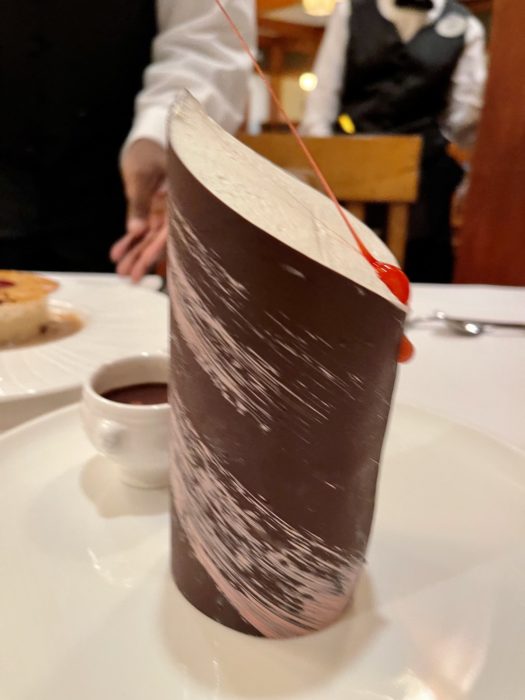 The tempered chocolate collar is to dessert what the seafood tower is to starters – high drama and a signal of something special. Chrissy admits the presentation was clumsy as it was clear her poor server had never cut one of these before and wasn’t her fault. 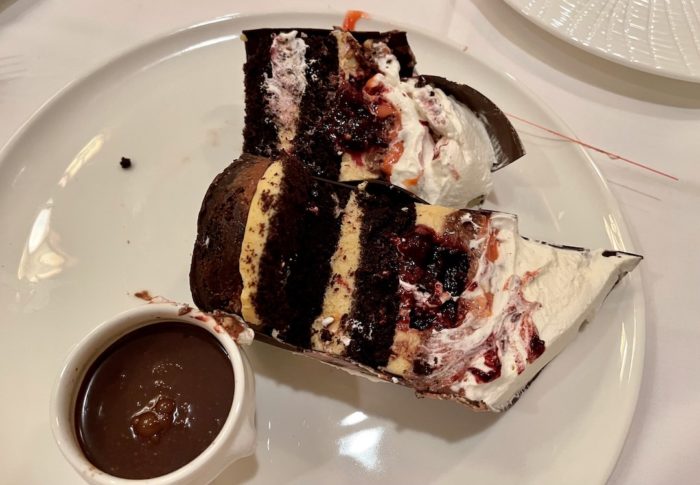 The inside of the cylinder had clearly defined layers that, unfortunately, all conveyed the same, overwhelming sweetness. This was less Orange Blossom Flan from Citrico’s and more Death By Chocolate from Bennigan’s, except it costs $19.00 and is too much grainy sweetness. Skip. 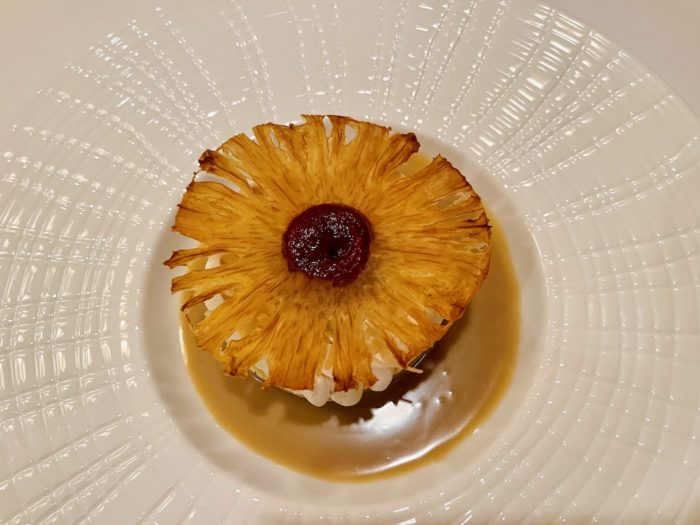 So pretty! And delicate! And it’s plant-based! Chrissy says she would get this one again. 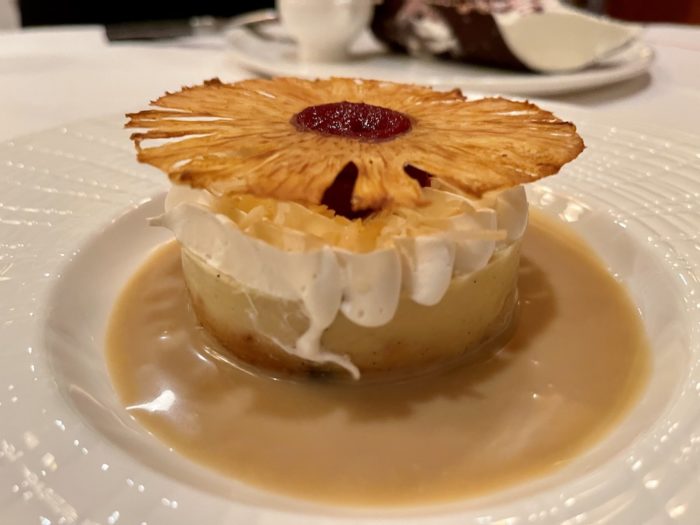 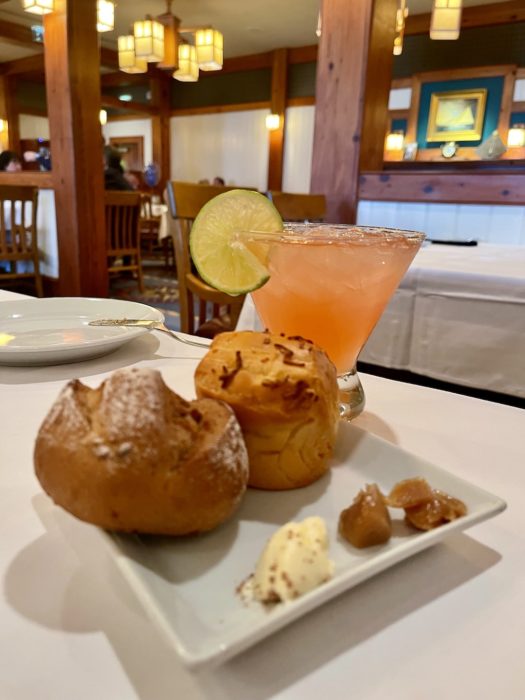 Light, fruity, and perfect with the bread service and crab or anything savory or tart. Once again, Chrissy says this was a drink she would order again in the future.

There were a few things Chrissy found to be pretty good, but there are literally dozens of other options at Walt Disney World that taste far superior and cost way less. She will visit again in a few months to see if the new staff has gotten into a better groove. This feels more like a Disney staffing failure more than anything else and that makes it more disappointing.

Have you ever dined at the Yacht Club’s Yachtsman Steakhouse? Let us know in the comments!