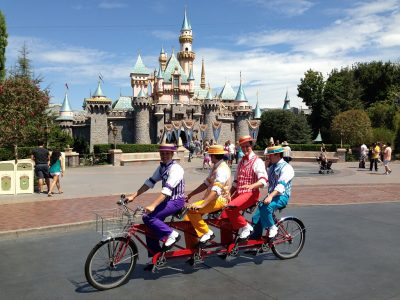 There are over 50 rides, shows, parades, and other attractions in Disneyland. But there’s also a lot to do outside of the park in the rest of Southern California. We often hear from readers that only have one day to spend inside Disneyland, and they ask what they must see during their single day in the park. That’s not enough time to do everything, but in this post I’ll show you the 9 things you must do at Disneyland when you only have 1 day. Before you start planning your day at Disneyland, you should use our Disneyland crowd calendar to decide which day of your trip will have the lowest crowds. Then use one of our pre-made touring plans, or our personalized touring plan software, which is basically a cheat sheet on how to beat the crowds in the park and wait less in line.

A must ride and one of Disney’s crown jewels. After walking through the elaborately decorated queue you load on to a troop-transport that takes you on a frantic ride through a cursed temple. Along the way you’ll encounter snakes, spiders, lava, rats, darts, a finally a giant rolling boulder.

Our book, The Unofficial Guide to Disneyland says it best:

The Indiana Jones ride is a Disney masterpiece—nonstop action from beginning to end with brilliant visual effects. Elaborate even by Disney standards, the attraction provides a level of detail and variety of action that make use of the entire Imagineering arsenal of high-tech gimmickry.

Indiana Jones Adventure is a very popular attraction. See it as early in the day as possible. Fastpasses will run out in the early afternoon on busy days.

Some may look at Disneyland Railroad as a simple transportation ride but there is so much more to it than that. Only at Disneyland can you ride on an authentic steam train and in the same trip ride along side a quiet river, see the freeways of Tomorrowland’s Autopia, visit the Grand Canyon, and end the trip with a dinosaur encounter. Yes, dinosaurs. That’s all I should need to say.

Note: The Disneyland Railroad is currently closed for Star Wars land construction, but is scheduled to reopen this summer. There are certain things in Disneyland that are very easy to miss, but that you should absolutely make time to see. There are certain areas of the park that are charming, and more importantly a quiet escape away from the crowds. An example of this is the Snow White wishing well and grotto located to the right of Sleeping Beauty Castle. It has a lovely waterfall with marble statues of Snow White and the Seven Dwarfs. There are also the things in Disneyland that are directly tied to Walt Disney. You can see, and eat in, the booth inside Golden Horseshoe where Walt and his wife Lilian celebrated their 30th wedding anniversary. Then there’s the petrified tree stump in Frontierland. Lilian Disney presented it to Disneyland in 1957 saying it was “too large for the mantle” at home. These are just a few of the smaller Disneyland details you should take the time to enjoy.

There’s plenty of healthy food inside Disneyland that will make it easy to stick to your diet but sometimes you just need to punish your body and consume a giant fried food substance. Disneyland’s corn dogs have reached legendary status. Sometimes the lines will reach over 30 minutes long, but it’s worth it. Grab one of these monsters, find yourself a bench in town square or the hub, and do some people watching while you scarf it down.

Pirates of the Caribbean is an all-time classic that tens of thousands of guests still enjoy every day. The ride will celebrate its 50th anniversary this year and it’s still just as grand, spectacular, and exciting as it’s ever been. Even after you’ve ridden it 20 times there’s still new details you’ll notice. The ride exists in other Disney parks around the world but nothing beats the original.

Many Disneyland visitors write off Mickey’s Toontown as an area only kids would enjoy but I’m asking you to take the time to give it a chance. The level of detail that you love in the rest of the park is also found in Toontown. Every building and object looks like it came out of a cartoon. Exploring Mickey’s House is a joy. You can meander through it and look at all of his awards and “props” from his many cartoons, then you can meet Mickey himself. There’s also Roger Rabbit’s Car Toon Spin, a dark ride but with slightly larger scale than the classic Fantasyland dark rides. It also has an interesting gimmick in that the cars can be spun by the rider. Think the Mad Tea Party plus Mr. Toad’s Wild Ride.

Sure, you can watch Disneyland’s fireworks from almost anywhere inside the park. But the best spot, aka the spot where you’ll get the full show, is in Disneyland’s hub. You’ll have a clear view of every firework, the projections that are shown on Sleeping Beauty Castle, and you’ll have a prime view of Tinker Bell’s show stopping flight over and around the castle. It all comes together to make a truly spectacular show and you’ll never look at fireworks the same way again. Unfortunately you’ll need to dedicate at least an hour, or more on busy days, to get a good spot in the hub but it is totally worth it. My favorite spot is in front of, but slightly to the right of Sleeping Beauty Castle. This is one of those things that is so Disneyland that you simply must do it. Grab a Dole Whip from the Tiki Juice Bar, and then wait for the next show of the Enchanted Tiki Room. Then take your delicious soft serve pineapple treat inside the Tiki Room and enjoy one of Disneyland’s all-time classics.

Now it’s your turn, let me know in the comments below what you think are some things people with only one day must experience at Disneyland.