Last week’s blog post about my unsuccessful attempt to eat lunch at Be Our Guest provoked a number of comments and questions, so I spent a humid Labor Day morning trying to make sense of the latest policies and procedures at the Magic Kingdom’s newest premiere restaurant. Be warned that everything in the below Be Our Guest lunch update should be taken with a shaker of salt, since operations are being adjusted on a daily basis — much to the chagrin of front line cast members, who often don’t know exactly how things will operate on any given day until they attend their morning meeting. With that said, here is my latest first-hand experience with Be Our Guest lunch standby and return time tickets, as well as same-day dinner reservations.

Be Our Guest Lunch Standby and Return Time Tickets

One of my first stops after rope drop was Be Our Guest restaurant, where much to my amazement I found a couple of people already in the standby queue for lunch. When I initially inquired about standby and return time tickets, I was told there was no guarantee yet whether they would be used that day, and was invited to wait in line or return closer to the 10:30 a.m. opening time.

I checked back a couple more times during the next hour (in between rides on Winnie The Pooh, Peter Pan’s Flight, and Under the Sea) and was given the same information from other cast members. I took a moment to peek inside at the lobby and armor hallway, which are open for guests to to view daily from park open until 10 a.m. By 10 a.m., there were at least a dozen people in line for lunch, and the line quickly grew. The queue completely filled the bridge before the giant wooden doors opened to cheering guests at about 10:29 a.m. A few minutes after the restaurant opened, a cast member began distributing these return time tickets: New guests were permitted to join the standby queue for a few minutes longer, but the line was cut off before too long. Likewise, the first batch of return time tickets were all distributed with about 15 minutes. At this point, a sign informing guests that the restaurant has “reached capacity for the day” is erected out front. Only guests with return time tickets or pre-booked FastPass+ lunch reservations (currently available online only to those with valid Disney resort reservations) are permitted to join the queue at this point. Front-line cast members were unable to say if or when additional standby return time tickets would be distributed, but indicated that the standby queue could reopen after 2 p.m. for the final minutes of lunch operation.

When I returned at my appointed time (after a quick trip through the cosmos via Space Mountain and the recently refurbished PeopleMover), I noted that a stack of return time tickets was still waiting at the greeter’s podium, but was told that no additional tickets had been distributed yet, and they could not say if more would be later. I was admitted immediately inside the restaurant, without a single person waiting between me and my touchscreen ordering station. Incidentally, I was asked if I was a resort guest; when I said no, I was handed an RIFD “rose” so servers could locate me. From the symbols on the greeter’s computer, it seems resort guests can skip the rose and simply be found by their MagicBands.

Once in the dining room, I realized that only about half of the tables appeared occupied. Most of the seats in the small “West Wing” were taken, but there was plenty of empty space in the two larger rooms. I can’t say if the underutilization was due to a large number of FastPass+ guests not showing up, or because of understaffing (though I saw plenty of cast members standing around), but it seemed odd to see so many tables while eager guests were being turned away outside.

As I departed, I confirmed that the day’s remaining return time tickets had indeed been distributed while I was eating, and were all gone by noon. I was told there was no set schedule as to when or how many were distributed, and that today’s pattern didn’t necessarily dictate tomorrow’s, since the procedures are being communicated to front-line cast members on a day-by-day (or even hour-by-hour) basis.

Be Our Guest Dinner Same-Day Reservations

While waiting for lunch, I also had the opportunity to observe cast members taking same-day dinner reservations from guests who walked up, in order to fill cancellations. The policy for an in-person Be Our Guest dinner reservation is slightly different from making one in advance online or over the phone, as no credit card deposit is required. However, the tables available to be filled all have designated party sizes (based on the sizes of parties that canceled), and you may not be given a reservation if you do not meet a minimum or maximum party size.

For example, I requested a table for myself, but only 4 seat tables (“four tops” in restaurant lingo) were available for my time frame. As a single guest, I was told I could not have a reservation slot that could otherwise seat 4; when I asked what would happen if I tried to book it and showed up alone, I was told I would not be permitted to dine.

Later, I clarified the policy with a manager, who explained that they could not seat a party at dinner with less than 50% of the table’s capacity. That is, a four top must have at least 2 guests, a six top must have at least 3, etc. If guests arrive with less than 50% of the party size for the booked table, the restaurant reserves the right to cancel the reservation. Alternatively, guests who pre-booked with a credit card could be charged $10 per missing diner.

In reality, Disney is unlikely to exercise such consumer-unfriendly measures, and I was told the most likely scenario was that the guests would be asked to wait additional time until a smaller table became available. While Disney understands that emergencies happen, deliberately deceiving cast members about the size of your party in order to secure a reservation is not advised.

I should also note that the manager cheerfully offered to help me arrange a dinner reservation for myself, which I declined.

The Bottom Line: Advice for Eating at Be Our Guest

If you want to have lunch at Be Our Guest and aren’t eligible for (or able to secure) an advance FastPass+ booking, your best bet is to be at the restaurant by 10:15 a.m. If you don’t mind eating that early, hop in the standby line. Otherwise, hang around the front gates and try to grab a return time ticket if and when they are given out. If you see cast members starting to set up the “closed for capacity” sign while you wait for return tickets to appear, jump in the queue just in case; until then, try to find yourself some shade within earshot. If you miss the first round of tickets and the queue is cut off, you can try waiting around until around noon to see if more tickets are distributed. As a last resort, swing by around 2 p.m. and see if they reopen the standby queue before lunch service ceases.

As for dinner, Be Our Guest reservations remain a hot commodity, so try to book online as soon as you are eligible, and check back for seatings daily. Same-day availability is erratic at best, but there are at least a few cancellations every day, so stop by in the first hour of the morning for that day’s availability. You have the best odds with a party of three or four; there are usually fewer openings for large or small groups.

Oh, and about the lunch itself?

The featured fish in my Tuna Nicoise Salad was exquisite – sushi grade and barely seared – and though the egg was poached a bit harder than I personally prefer, and there was only one lone green bean on my plate, it is a salad worthy of an upscale restaurant. The potato leek soup was even more delicious. I wish the meal came with bread, because I could barely refrain from licking the bowl clean! The only disappointment was the Master’s Cupcake, which I was looking forward to since I’ve never had the famed “grey stuff” at dinner. The chocolate cake base was nicely moist but shockingly small for the price, and the signature monochromatic frosting was mostly flavorless, with little distinctive taste beyond bland sweetness. I’ve enjoyed the other desserts I’ve had at Be Our Guest more. What have your experiences getting into Be Our Guest been like? Let us know in the comments below! 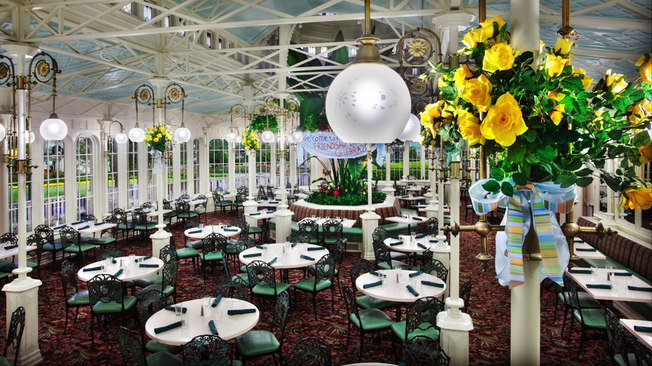 48 thoughts on “Be Our Guest Lunch Standby and Same-Day Reservation Policy Updates: September 1, 2014”