This week’s SATURDAY SIX is a special one as we present: A First Timer’s Guide to Surviving Halloween Horror Nights. Today is the last day of Halloween Horror Nights, the Universal Orlando Resort’s signature event, and one of the absolute best reasons to plan a vacation to Orlando this time of year. 2015’s HHN looks to be even better as it will be the 25th anniversary, and we already know that HHN icon Jack Schimdt will be returning. While many guests are used to the offerings of Mickey’s Not So Scary Halloween Party, there are more than a few who are skittish about putting their foot into HHN to test the water. So I reached out to Joseph Matt of Parkscope.net, as he recently returned from his first ever HHN, and he is here to share six tips he learned from the experience. Take it away Joe….

A First Timer’s Guide to Surviving Halloween Horror Nights“[Horror] shows us that the control we believe we have is purely illusory, and that every moment we teeter on chaos and oblivion.” -Clive BarkerHalloween Horror Nights is intimidating. For my first year to HHN I was a little nervous, and it didn’t help that several Orlando blogs, Orlando United, and my friends had hyped up the event to a point where #OperationScareJoe became a ‘thing.’ However, my anxieties and worries were largely unfounded. I had a blast, and cannot wait to go back for more HHN. As this year’s event closes this weekend, I will cover my top tips to surviving the event next year.1.) Pick Several Nights and Split Them With a Day in the ParksEight houses, four scare zones, several open attractions, and two shows. Easy as pie, right? Wrong. During my trip The Walking Dead never dipped below 90 minutes and John Carpenter’s Halloween hovered at 60 minutes. How does one beat this? Pick multiple nights to attend and split that with a day visit to the parks.

Excluding “Hell Week” days when local schools are off, Thursdays and Sundays are the least crowded days of the week, especially prior to 8pm when the parking at CityWalk becomes cheaper. Plus, Universal offers a great way to beat the crowds: Stay and Scream. Guests who are holding Hallowen Horror Nights tickets and are in the park prior to close are allowed to stay in select Stay and Scream holding areas. Once the event starts, guests are released earlier than those at the main gate, allowing access to the most popular houses first.Universal offers many ticket packages to encourage repeat visits. The Rush of Fear, Frequent Fear, and Frequent Fear Plus tickets all offer discounts for multiple nights per year. If you wish to visit the first few weeks of Hallowen Horror Nights, the Rush of Fear offers 10 nights of access for just $76. That is a steal compared to the $95 per day normally offered. By picking the right days and splitting it with a day in the parks, you can see the most popular houses with minimal waits all while soaking in the scare zones and shows. And trust me, you’ll want to see it all.2.) The DelugeHalloween Horror Nights occurs smack dab right in the middle of Hurricane Season for the east coast. The combination of a hot, humid day in September combined with the fall weather coming in nearly guarantees a rainy night. Every scare zone and houses’ queue is outdoors, so this will lead to a nasty evening if you do not prepare. I was caught in the rain while in house lines, stay and scream areas, and waiting for shows. This is not a drill people.

To help counter Mutha Nature, be sure to wear comfortable shoes that can dry out easily, bring a poncho, and carry a plastic bag for your electronics and wallet. Also, embrace the indoor attractions offered, such as The Simpsons Ride, Transformers, and Men in Black, as they will have you waiting under cover rather than in the elements. The two shows of HHN are also performed under cover, which leads us to…3.) The ShowsAt Halloween Horror Nights the two live shows can be considered the risqué Halloween costumes of the event. And what shows they are, Bill and Ted’s Excellent Halloween Adventure and The Rocky Horror Picture Show are two of the best acted and performed theme park shows anywhere. They are both worth at least one visit and are a great reprieve from the non-stop action during HHN.

Rocky Horror Picture Show is a distilled retelling of the cult movie, using live performers mixed with some film scenes. The back up dancers do their best to teach the audience The Time Warp dance within 30 seconds as a pre-show, but ultimately fall short. If you are interested in participating in the show as if this was at a dollar cinema at midnight, make sure to sit in the first several rows. Remember: yelling obscenities and profanity is prohibited (but, unfortunately, not really enforced.) I found Rocky Horror a well produced and fantastically performed show that you must experience once.Bill & Ted’s Excellent Halloween Adventure (Bill & Ted for short) is a celebration of all your least favorite celebrities from the past year mixed into a pop culture blender with a few bikinis and malt liquor. While the fourth wall is broken similar to Rocky Horror, the audience takes a more passive role by simply winking along with Bill & Ted. Each year’s ‘plot’ revolves around Bill & Ted finding a MacGuffin into which all manner of celebrity impersonations are stuffed. Tim Howard from the World Cup? Check. Megan Fox as April O’Neil? Check. Lego people from The Lego Movie as visualized in an acid trip due to acid laced cupcakes from Walter White? Check. I loved Bill & Ted and saw it five times my trip. If you like the comedy of South Park, American Dad, and Robot Chicken, this show will speak to you in a way nothing else does at any theme park.4.) The HousesEvery year Hallowen Horror Nights’ main focus is on the haunted houses; each one an elaborate E to D ticket walk-through on par with any major central Florida attraction. The Alien vs Predator house is comparable to what you will experience in the Alien scene from The Great Movie Ride and John Carpenter’s Halloween was a pitch perfect walk through of the movie. Each house features obsessive detail, awesome effects, and dedicated scare actors working every night. I was terrified at first, but I learned to survive the scares by understanding them more.

Halloween Horror Nights uses several methods to startle and frighten. The overall ambiance, settings, and even smells creates dread and tension. Strobe lights, fog, and objects hanging from the ceiling aim to disorient and confuse you on your location. When you see a large show piece, gory scene, or special effect, this is to distract from a scare actor positioned to frighten you. Sometimes there is a fake wall, or a door where a scare actor will pop out, prompting a ‘jump scare.’ And just like a good dance, each house has it’s own set pace and flow, which dictates how the actors will scare. Once I understood these illusions, I found the houses highly enjoyable, could appreciate the craftsmanship involved, and understand the art of the medium.5.) Partake in Some of the Seven SinsTheme park food is usually decadent, but Halloween Horror Nights takes that up to gluttony level. Philly Cheesesteaks, Loaded Tater Tots, Twisted Taters (think a spiral cut potato on a stick), and previous years have even featured a deep fried PB&J and banana sandwich. This is added to all the sinful food items found at Fast Food Boulevard and the pub grub at Finnegan’s. What is food without something to wash it down with? At Halloween Horror Nights you have your choice of blood bags (look for the scantily clad nurses), mixed drinks, Fireball shots, Shark Attacks from Chez Alcatraz, and brews from Finnegan’s and Duff Gardens.

With cooler nights and fantastic atmosphere, Halloween Horror Nights is a good time to lounge at Duff Gardens and people watch while enjoying a beer,  or watch as terrified guests run in from The Purge over at Finnegan’s.If there’s one mistake I made at the event it was trying to do Stay & Scream and Finnegan’s at the same time. The 30 minute wait for a table became over an hour, and the serving staff tried their best to appease the massive crowd. Despite us ordering our drinks, food, and handing them our credit card all at the same time, we didn’t get out till an hour after the event started. Lesson learned.6.) But Most of All… HAVE FUNHalloween Horror Nights is unlike anything else in Orlando, pushing the boundaries of what a theme park will do with risqué, gruesome, and terrifying material. This is the ultimate pretend game, with live human hunting actions in The Purge, voodoo priestesses and demons, Elsa rapping to Ice Ice Baby, demonic clowns with chain saws, Aliens and Predators, and Michael Myers. While I have had anxieties about the event prior to my visit, they were unwarranted and foolish in retrospect.

The event is about letting your guard down, and going with the flow. If the tag line of Universal Studios Florida is ‘ride the movies’, Halloween Horror Nights’ tag line should be ‘LIVE the movies.’ The park transforms itself into an environment where every guest is part of the anarchy to try and survive the night. There are scares, there are laughs, and depending on your preferences, there are plenty of drinks. Halloween Horror Nights went from a cursory glance up I-4 to see what the ruckus was, to a must do yearly event for me. I’ll meet you all there next year, and the Duffs are on me before Bill & Ted’s Excellent Halloween Adventure.

So there you have it: A First Timer’s Guide to Surviving Halloween Horror Nights. For years I was in Joe’s shoes, having very little interest in Halloween Horror Nights as my overall interest in “horror” is pretty low. My gateway drug was The Walking Dead. And just like Joe, once I actually experienced HHN, I knew immediately I would be returning every year, even making the case that it is a better event overall than Mickey’s Not So Scary Halloween Party (and I think MNSSHP is fantastic.) Next year looks to be a very special event for HHN, possibly the biggest ever, so consider making a trip down and joining Joe and I for the festivities.

See you next weekend for the latest edition of the SATURDAY SIX, where we are going to head back to the high seas for an article spotlighting my new home away from home, the Disney Cruise Line. If you had fun, be sure to check out The Magic, The Memories, and Merch! articles, or, for your listening pleasure, check out the Pardon the Pixie Dust podcast.

Special thanks to crack staff photographer Brandon Glover, photo wunderkind Mike Sperduto, Universal park legend Hate to Fly, the Park Blogger podcast’s Aengus Mackenzie and Orlando United’s own BriMan for their invaluable assistance with this article. And of course we have to spotlight Parkscope Joe himself. Joe Matt is one of the rare people who inspire me to become a better person. He is smart, funny, humble, and one of the most good natured men I have ever met. I am honored to call him a friend.

R.I.P. NASCAR Grille. You will be missed. 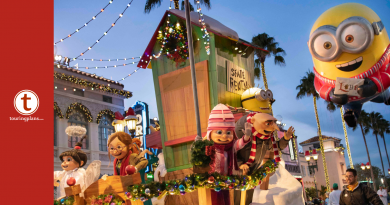