There are tons of delectable choices of sweet treats scattered throughout Walt Disney World, but none offer quite the combo of taste and adorableness of a Mickey apple. There are an endless variety of Disney World candy apples available: from the super simple (and yet still ridiculously tasty) plain caramel apple or carnival-style candied apple to the elaborate specialty apple that has been shaped like Cinderella’s carriage.

Let’s look at some of the gorgeous options!

First of all, before we begin truly examining these apples, let’s talk about a few things: First of all, the regular old candy apple is available (priced at $5.79), but there’s nothing to truly set it apart from an apple you can get from anywhere else. Also available is a simple caramel version, either with or without peanuts — again like any other apple. The fancier apples are all priced at $9.99, whether you pick one up off the shelf or get one out of the display case. Another thing to keep in mind is that they will happily cut the apple for you. That makes it way easier to eat and share on the go. Simply ask the cast member and then watch in amazement as they do it much more easily and quickly than you could possibly manage.

One caveat to keep in mind is at the Karamel Kuche in the Epcot’s Germany Pavilion, where they have apples that are simple caramel and nuts; those apples are covered in the delectable Werther’s caramel, which elevates them far beyond the traditional apple. Even though those apples are ostensibly simple, that world-famous caramel makes them a must-try for apple enthusiasts. The Karamel Kuche apples are priced at $6.49 for a plain caramel apple, $6.99 for one with nuts, and $9.99 for all the others. (As always, don’t forget to click on the picture for a larger version).

Not only are there various types of Disney World candy apples, there are different options at each treat location. One of the best locations for getting an apple is the Goofy Candy Co., since they very rarely run out (which can be a problem at the Main Street Confectionery) and tend to have much shorter lines than the shop in Magic Kingdom. Another great option is Big Top Treats, which is in in Storybook Circus at the Magic Kingdom. Big Top Treats generally doesn’t have as many options, but the lack of long lines makes it worth checking to see if there’s an option you haven’t had.

Disney candy makers are very clever, and change things up constantly. There are always new styles that are debuting, but there are some mainstays too. Something that is common is an apple in the shape of the traditional Mickey Mouse head. The Mickey ears are created by using part of a marshmallow, with other candies added.

No matter how fancy the outside of the apples may be, the inside starts with the simple caramel apple, which is then dipped in either dark, milk, or white chocolate. Next, they add design elements that add shape to the apple and then they dip it again. Finally, they are coated with the external coating, whether it’s nuts, sanding sugar, cinnamon, or candies.

Whenever there is a new movie, you are almost guaranteed to get a specialty apple. The recently released live-action Cinderella inspired a carriage apple, with wheels made from round vanilla cookies, and the entire thing was coated with a shimmery dust.

In addition to getting new apples for every new movie, there’s also special editions for every holiday, adding infinite varieties to the already numerous styles of the apples.

The candy apple is a fabulous treat to try the next time you find yourself at Walt Disney World. Be sure to check out the options on display next time you are visiting Disney. Now, here’s a just a small sample of the apples you might be able to spot on your next trip:

Which of these did you find most tempting? Have you tried any of these? And any other treats you’re interested in seeing up close? Let me know! 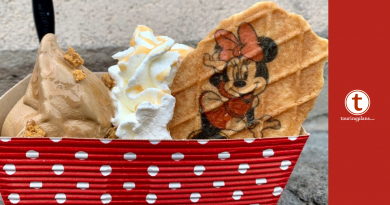 Gingerbread Sundae is a Perfect Taste of Christmas