This week’s SATURDAY SIX takes a look at Six Worst Case Scenarios That Could Come Out of the D23 Expo. Coming along once every two years, the D23 Expo is not just a Disney Convention, it is THE Disney Convention. In fact the D23 Expo is such a big deal that Hollywood powerhouse Marvel Studios is holding their annual presentation at the Expo instead of last month’s gigantic San Diego Comic Con. Already big news is coming out of the Expo at the Anaheim Convention Center, including the public display of the incredible scale model of Pandora, giving us a glimpse of what will soon be coming to Animal Kingdom. Movie posters for The Incredibles 2 and Cars 3 made their debut along with the first ever footage shown for Captain America: Civil War. But what theme park fans are interested in is the presentation taking place on Saturday featuring the Parks and Resorts division. It is here where we will find out what is coming to the Disney parks across the world.

Rumors have been flying for months leading up to the Expo of what will be talked about at the Parks and Resorts presentation, and more importantly, what won’t be talked about. Theme park fans in Florida have watched as Disney’s Hollywood Studios has been slowly shutting itself down, which is surely leading to an announcement for what’s coming, right? Frozen Ever After will be the first new attraction in Epcot’s World Showcase in over two decades, we’ll surely get information on that, right? Everyone is hoping for the best, but to borrow a phrase from our dearly departed friend “Rowdy” Roddy Piper: we’re here to chew bubblegum and pop pixie dust…and we’re all outta bubblegum. We here at the SATURDAY SIX are taking our rose colored glasses off and thinking aloud “what’s the worst that could happen?” So sit back, relax, and let’s begin our countdown starting with…

Last year Disney weathered the storm during the #SaveMaelstrom movement. In 2016  Epcot will debut the new Frozen Ever After attraction along with one of the most detailed meet and greets in the company’s history, and imagine the ground that covers. So if Frozen and the fictional country of Arendelle were shoehorned into Norway, why not just keep going? The Mexico Pavilion is right next door, so instead of a ride featuring characters from a Disney animated movie that no one under the age of 50 has even heard about let alone seen, how about we focus on the star of one of the biggest Hollywood blockbusters of all time, the lovable snowman OLAF!

But that’s not all! It’s widely known that – at best – The Morocco Pavilion’s Spice Road Table has underperformed since its debut, even after a radical change to its menu. So let’s give it a quick Frozen makeover: a Queen Elsa inspired name along with a menu featuring a mix of “Arendelle” food items from the Electric Umbrella and the BoardWalk Pizza Window, and Bibbidy Bobbidy Boo! The new Ice Road Table has a longer line than the Candlelight Processional.

Let’s face it. The Hall of Presidents attendance needs a boost. Guest surveys show the # 1 reason guests enter the attraction is for “the air conditioning.” In order to breathe new life into this patriotic attraction, Disney imagineers have decided to add an animatronic of Republican poll leader Donald Trump to spice things up. Not only does the Hall of Presidents get a breath of fresh air, it gets an even bigger dose of hot air as many of Trump’s long winded (and hilarious) quotes are played to the enjoyment of the crowd. In fact WDI has taken the opportunity to tweak Trump’s “positions”  to be more theme park friendly, such as building a giant wall across I-4 to keep the Universal Fans from “crossing the border” onto Disney property. Fun for the whole family, but especially those disconnected from any sort of reality.

And good news, the real Tump promises wait times “will be HUGE!”

Who among us could forget that incredible moment during a Disney Shareholder Meeting when a 6 year old boy asked Bob Iger, “when are you going to fix the Yeti?” Wait, that wasn’t the question. Oh yeah, the question revolved around changing the name of Disney’s Hollywood Studios. Those of us who are a certain age have just stopped calling it “MGM,” and now we are going to have to learn another name? Other countries may speak multiple languages, but this is AMERICA and we hate learning new stuff! A pox on you Disney! A pox we say! And may you suffer the same fate as Universal when they tried to chang their name back in 1999!

# 3 – Following Jock Lindsey’s Hangar Bar, Star Wars Gets the Indiana Jones Treatment with Dining Venue Based On A Character We Don’t Care About

Everyone has their “dream” Star Wars project at Walt Disney World. It seems unanimous that guests want a recreation of the Mos Eisley Cantina from Tatooine. Jim Hill and Len Testa have tantalized us with dreams of a speeder bike attraction taking place on the forrest moon of Endor. Who wouldn’t want to take a walk around a full scale replica of the Millennium Falcon and play a game of Dejarik?

Bad news. None of that is coming. Why? For the same reason all of us Indiana Jones fans who have wanted a great Indiana Jones attraction at WDW for 20 years got blind sided by AN INDIANA JONES BAR FEATURING A CHARACTER NO ONE KNOWS. So lower your expectations, and then lower them a little bit more as the Star Wars that you are going to get is a restaurant based on a C-Level character that you “kinda” remember featuring a bunch of pun-filled food items.

Bad News! The characters are Jar Jar Binks and both the actors who played Anakin Skywalker in the prequels. Too bad, so sad!

Great news! We were just kidding about that Star Wars restaurant. In fact we were kidding about getting any Star Wars news at all. That’s right, in the darkest of all timelines we just may find out the only new thing coming to Disney’s Hollywood Studios in the near future is a bunch of off-the-shelf carnival rides themed around Toy Story characters. Our dreams of a Cars Land in Florida may be dashed… the Monsters Inc. roller coaster we all prayed for may be staying in our fantasies… but at least we may get a version of Mater’s Junkyard Jamboree without the one thing that makes that ride special (the soundtrack.)

Ever since Disney bought Marvel for $4 Billion in 2009, Disney fans have expected Universal to just roll over like a dog and hand over the Marvel theme park rights. Instead Universal has upgraded the Amazing Adventures of Spider-Man and just announced a massive refurbishment to the Incredible Hulk Coaster. Those don’t seem like the actions of a company about to hand back the rights to something which they own “in perpetuity.” Disney, of course is dying to get Marvel characters into it’s Florida parks, but they couldn’t even put an Avengers advertisement on the monorail which goes through Epcot because they would be violating Universal’s contract. Because they weren’t in the original contract, the Guardians of the Galaxy characters have made extremely rare appearances inside the Disney parks (most notably at the infamous Villain’s Unleashed event.) But with the Guardians clearly heading towards sharing screen time with the Avengers in the upcoming Infinity War movies, one can imagine Universal’s lawyers salivating at the opportunity to challenge their future park appearances.

So what can Disney do? Well, Disney can find the one person who is involved in ALL the successful Marvel films (even the X-Men ones from Fox) and integrate him into the parks. Of course we are talking about the one….the only….the great Stan Lee! Now Stan “The Man” can extend his trademark movie cameos straight into some of WDW’s most beloved attractions!

Like George Bailey discovered in It’s A Wonderful Life, this future is NOT written in stone. If we believe…TRULY BELIEVE in our heart of hearts that Disney Magic can triumph over catering to Wall Street, the Walt Disney World of our dreams just may come true after all. If you need me, I’ll be riding my hover board out to CA to see my San Diego Chargers play in Super Bowl 50.

So there you have it: Six Worst Case Scenarios That Could Come Out of the D23 Expo. See you next weekend for the latest installment of the SATURDAY SIX, where we’ll look at something fun from the world of Disney and Universal. If you enjoyed yourself, be sure to check out The Magic, The Memories, and Merch! articles, or, for your listening pleasure, check out the Pardon the Pixie Dust podcast. You can also follow Your Humble Author on Twitter (@derekburgan)

RIP Roddy Piper. You were the greatest of all time.

Six Disney Gifts Can Take Back To the North Pole

Special Thanks to crack staff photographer Brandon Glover, master photo manipulator Matt Cleary, photo wunderkind Mike Sperduto, NKOTB Michael Sheehy, and blogger to the stars Megan Stump for their invaluable assistance with this article. Be sure to also check out Brandon on The Park Blogger podcast with co-hosts Aengus Mackenzie and Brian Carey (who gets a special No Thanks this week after his week long trip to Disneyland resulted in a total of two pictures taken.) 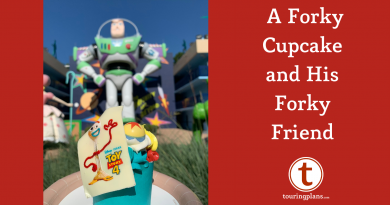 The Forky Cupcake with a Forky Friend 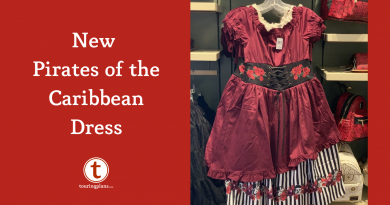 We Want the Redhead! New Pirates of the Caribbean Dress and Purse

6 thoughts on “SATURDAY SIX: Six Worst Case Scenarios That Could Come Out of the D23 Expo”