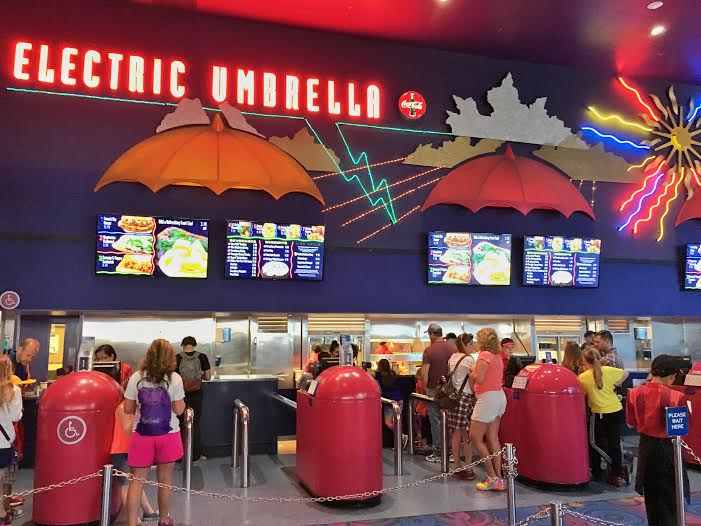 We’ve all been there – rushing between FastPass+ reservations, suddenly realizing it’s been eight hours since your character breakfast and hunger starts taking over. If you happen to be in Epcot’s Future World, you may be drawn towards the bright, shining beacon of neon that is Electric Umbrella. Located just outside of Innoventions East, this quick service location offers variations on standard theme park fare in a central location (burgers, chicken nuggets, flatbread pizzas, etc.). Here, I take a look at a recent meal I “enjoyed” here to see if this restaurant is worth a stop to solve your next food emergency (spoiler alert: it’s not).

A friend and I dropped in pretty close to opening (11:00 AM) in order to beat the lunch rush and sometimes long waits common at popular Walt Disney World quick service restaurants. We were greeted by neon, so much neon, a set of helpful menu boards, and a cheerful Cast Member who directed us to an ordering station after only a few minutes in line. We decided to tackle the French Dip Burger and Vegetarian flatbread (who can go wrong with a burger and pizza, right?), and added on a chocolate cupcake for dessert. All told, with one soda and a cup of water, two entrees, and one dessert, our bill was a little over $30 – not a jaw-dropping total if you’re used to tourist prices, but definitely something to keep in mind when budgeting for a meal here or elsewhere at Walt Disney World.

Once we reached the pick-up window, we were told that the vegetarian flatbread takes six minutes to prepare (we weren’t in a hurry, but might be of interest if you are working on the clock). We figured it would be worth the wait, and eventually received our food and empty cups for drinks, and sent off to the condiment and drink stations. One of the best parts of Electric Umbrella is the unlimited refill and not-RapidFill-enabled soda machines – easier and faster to use, tons of options on tap, and centrally located. Stocked up with all the necessities, we decided to take advantage of the great Florida weather and grab a table in the outdoor patio facing Fountain of Nations.

First bite – the French Dip Burger. I have to admit, I was a bit scared of this burger before I even ordered it. I love a good burger, and Walt Disney World has its fair share of them, but I’ve never been a big fan of the frozen patties served at the quick service locations around property; they’re not that different than school cafeteria burgers. This lived up to those low expectations, sadly. The burger itself comes with a standard beef patty topped with pulled brisket, muenster cheese, and French fried onions. Remarkably, this managed to be both greasy and dry at the same time – a marvel of modern cookery. The bun was pretty stale and chewy as a result, which didn’t really help. Muenster cheese seems like an odd choice for this burger – too mild to really taste like much of anything. The brisket on top was surprisingly tender, but it didn’t have any particularly strong flavor, nor did anything else on the burger, save maybe the French fried onions (just like the ones you put on Thanksgiving green bean casserole). Served on the side – a handful of standard Disney French fries: salty and barely crisp outside, fluffy inside; they get the job done. Overall, this dish was a hard pass for us. We barely finished a third of it between the two of us. You might have better luck with the Angus bacon cheeseburger on offer here; the bacon and American cheese might offer a little flavor to the bland burger, and it’s cheaper in price.

The vegetarian flatbread, on the other hand, surprised me with its quality. This flatbread is pretty similar to something you’d see at other locations like Contempo Cafe or Pinocchio Village Haus, a large, thin flatbread pizza base with a tomato pesto (think herb-heavy pizza sauce), feta cheese, and mushrooms, topped with arugula. There was a pretty thin layer of the tomato pesto, totally dried out on the  base of the flatbread after cooking, but it still had a slight garlicky, tangy flavor. The feta offered a little creaminess and funky contrast to the earthy mushrooms (those poor overcooked mushrooms, sadly shriveled up and a little dry). The arugula atop the flatbread had been dressed in some kind of acidic vinaigrette, which helped add a bit of bite without making the flatbread salty. You could probably easily fool kids or picky eaters with this dish by calling it pizza and get away with it in looks, but definitely not in taste. Overall, it’s a pretty sophisticated take on the cheap pizza you’d expect from a quick service location, and was filling, even for carnivores. For the price, this seems like a safe bet if you’re in danger of starvation in Future World and craving something that hasn’t spent a few minutes in the deep fryer.

The meal was on an up-tick, so we were optimistic the chocolate cupcake wouldn’t disappoint. It’s decently sized (halfway between the enormous Disney specialty cupcake and a grocery store cupcake), plain vanilla buttercream on top of a devil’s food chocolate cake. The cake itself was rich and deep in chocolate flavor, a little dry, but edible enough with a little of the overly-sweet, thick buttercream. This dessert is pretty easy to share, but if you’re looking for something sweet for the price and aren’t on the dining plan, skip it and save room and money for ice cream at L’Artisan des Glaces in the France pavilion or school bread from Kringla Bakeri og Kafe in the Norway pavilion of World Showcase.

Nearly every theme park has a quick service location like Electric Umbrella – close to the entrance, chock-full of basic food that most families won’t find too scary. And that’s OK – I can’t fault it for that. That being said, it does deserve a fair assessment considering the abundance of other dining options in Epcot and adjacent resorts. I can’t in good conscience recommend the French Dip Burger to anyone with taste buds, picky or not; it’s just not worth your money, even with the convenience. The vegetarian flatbread is a pretty decent meal, but if you’re looking for a better option in Future World, head to Sunshine Seasons in the Land pavilion – slightly more adventurous food (picky eaters, beware), but far fresher and a much wider variety for the price. If you’re stuck on grabbing a burger, head over to Crew’s Cup Lounge at Yacht Club Resort (only short walk from Epcot’s International Gateway entrance) for a much higher quality burger and fries for only a few dollars more. Overall, Electric Umbrella will work in a pinch, but far better options for a quality quick service meal are just a few steps away.

7 thoughts on “Dining Review: Is It Fair to Throw Shade At Electric Umbrella?”