The November Crowd Calendar update is now live. We are approaching the busiest time at Walt Disney World: New Year’s, Christmas, and Thanksgiving. It’s always a good plan to arrive early and use a touring plan. It’s even more important on high crowd level days. 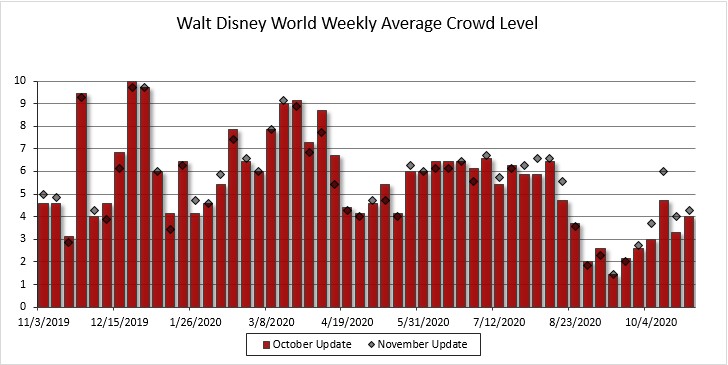 The week of Thanksgiving (November 23-30) will have crowd levels of nines and tens at all the parks. Pack your patience and use a touring plan.

Thanksgiving is late in 2019. This will only give three weeks of moderate crowds before the Christmas and New Year’s crowds start arriving on December 20. Magic Kingdom is hosting 13 Christmas Parties between December 1 and 22. The nine days without a party will have higher crowd levels.

December 5 is the opening date for Rise of the Resistance at Star Wars: Galaxy’s Edge at Hollywood Studios. The opening of the highly anticipated headline attraction for the Star Wars land will bring in the crowds in early December. We expect the crowds will be higher than normal for early December as locals and others try to experience the new ride before the holiday crowds descend on central Florida.

December 7 is the only day before December 30 where Magic Kingdom is scheduled to be open until midnight. This an unusually late closing time for early December, and is causing the change in the crowd level from 5 to 9. It looks like Disney is expecting the crowds that come in for the opening of Rise of the Resistance to flood into the Magic Kingdom on the 7th.

It is very likely Disney will extend park hours during the holiday period.

The first six days of the new year will still be crowded with Christmas and New Year’s crowds. Crowds will not completely dissipate as the Walt Disney World Marathon is the following week. Martin Luther King Day weekend (January 18-20) will have high crowds.

Early February will have low crowds. The weeks of Presidents’ Day (February 15-23) and Mardi Gras (February 22-29) are popular times for many school districts to take a break. Luckily the two holidays are on different weeks in 2020 and will help spread out the crowds.

Spring Break has become a very popular time at Walt Disney World, even more popular than the summer. With Easter moving around the calendar from year to year, the crowd pattern also changes. Easter 2020 is April 12. The week before Easter (April 4-11) will have the highest crowds during March and April.

Memorial Day (May 25) kicks off the summer season at Walt Disney World. Schools are starting to wrap up, and most schools will be on break by the end of June. The summer heat and longer park hours help spread out the crowds. It will be interesting to see what Disney comes up with to entice guests to visit during summer 2020. Expect to see discounts and new attractions being opened.

The further we look into the future, the less information we know of Disney’s and school schedules. In April and May, schools will start finalizing their schedules for the 2020-2021 school year. Crowd levels for fall 2020 are mostly influenced based on fall 2019 data.

What we are watching

2021 is going to be the 50th anniversary for Walt Disney World. Disney will have a 16-24 month celebration. Guests who do not go to Walt Disney World every year will likely postpone their vacations until 2021. Disney’s marketing will be in full force trying to entice guests to visit before the 50th anniversary celebration. We also will be watching for the impact of Rise of the Resistance and other attractions opening in 2020.