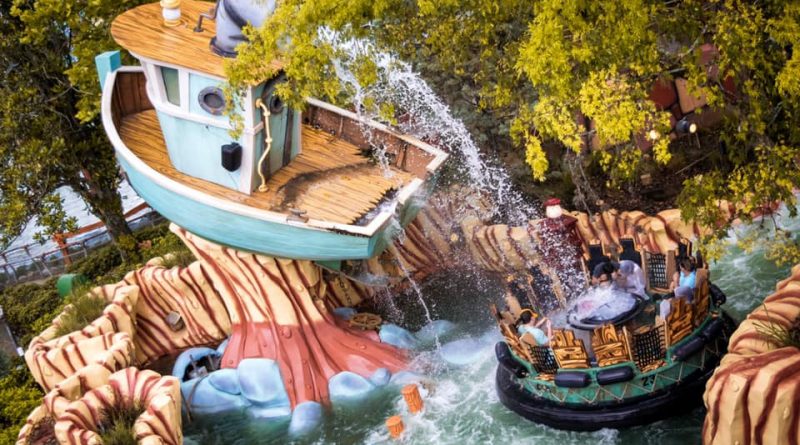 This week’s SATURDAY SIX takes a look at TOON LAGOON at Islands of Adventure! Over the years we have given an in-depth look at many of our favorite lands at Universal’s IOA, including Port of Entry, Marvel Superhero Island, Jurassic Park, Seuss Landing and – of course – the Wizarding World of Harry Potter – Hogsmeade Village. But this week we are going into one of the least talked about lands in the park, despite the fact that it has two incredible attractions.

The biggest “complaint” about Toon Lagoon is also – in my opinion – one of the land’s strengths. Toon Lagoon is based around characters from newspaper comic strips and the subversive Jay Ward cartoons. As anyone who has read a newspaper lately – and judging by newspaper sales that probably isn’t you or anyone you know – comic strips are becoming a dying breed. Once a daily staple of American life, comic strips and editorial cartoons have slowly had their space in newspapers reduced. In fact, the NY Times recently made headlines this week with the announcement that they will no longer publish editorial cartoons, something which our parents and grandparents would have considered unthinkable growing up.

Toon Lagoon is a reminder of the importance comic strips once held in America. Filled with humor, heartbreak, and a healthy dose of speaking truth to power, newspaper comics can appeal to every single person in the household – young or old, male or female, rich or poor – in a way that no other section of a newspaper can. Today we are going to look at one of the most underrated areas of any theme park, starting with…

One of my favorite “secrets” of Islands of Adventure is the waterside areas that you can explore. No matter how busy the park is, these areas are almost always completely empty and often have fun surprises to discover. Toon Lagoon has possibly the largest quiet area of all the lands. With great views of the Wizarding World, Lost Continent, Seuss Landing, and Marvel Superhero Island, this is the perfect area to take a break and relax.

Be on the lookout for some fun visual gags.

Islands of Adventure gets a lot of attention for its E-Ticket attractions such as The Amazing Adventures of Spider-Man and Harry Potter & the Forbidden Journey, but it also has several E-Ticket play areas for kids with a level of detail you won’t find at any other theme park. Camp Jurassic in Jurassic Park is one of my favorite places in IOA, period. Me Ship, The Olive is a three-story interactive playground themed to Popeye’s boat. Inside you’ll find stairs, slides, climbing platforms and a whole bunch of elements that kids can play with.

If you play the notes in the correct order on this piano you’ll get rewarded with a musical theme synonymous with Popeye.

Climbing up to the upper levels of Me Ship, The Olive will give guests some wonderful views of Islands of Adventure.

While you may have to get Grandpa or Grandma to explain who some of the characters are, Toon Lagoon is LOADED with a ton of great areas to take fun family photos or Instagram-friendly selfies. Among the more popular photo-ops are the various “word balloons” which you can position near the people in your photos.

Dog lovers will see plenty of friendly pooches to take photos of.

Speaking of dogs, there is a clever photo-op featuring Marmaduke which lets guests appear like they are being pulled wildly by the large Great Dane.

While this fine blog series has repeatedly mentioned that taking a vertical photo is the cardinal sin of Theme Park Photography, the way the Marmaduke photo-op works is that you take a vertical shot of a guest holding on to Marmaduke’s leash, and then transition the photo to landscape to see the “scene.”

We mentioned earlier that Toon Lagoon is based around newspaper comic strips and Jay Ward cartoons. For those who don’t know, Jay Ward was a producer of cartoons that were essentially the South Park and Family Guy of their day. Filled with self-referential humor, highbrow (and lowbrow) jokes, and a shameless use of puns, Jay Ward cartoons still stand in a league of their own. While many people remember Jay Ward’s most famous characters of Rocky & Bullwinkle, for me personally it was the next level bonkers shorts like Fractured Fairy Tales and Aesop and Son that kept me watching.

I’ve always been a huge fan of  newspaper comic strips. Growing up, my grandmother would do the crossword puzzles, my mom would do the Jumble, and I would read all my favorite comic strips like Garfield, Peanuts, and Beetle Bailey. As I got older, I still enjoyed those strips, but started to fall in love with more nuanced comics like For Better or For Worse, Bloom County, and Calvin & Hobbes. Comic strips like The Far Side, Non Sequitur, and Pizarro encouraged me to read more and inspired me to draw my own stories.

Readers of the Disney Outlet Store Photo Report may remember that to celebrate the Four Year Anniversary I used comic strips as the running theme. One of my “guilty pleasure” strips is Family Circus. I’m a sucker for the strip despite the fact that it is a humor-based comic with just about zero humor. One of the long running gags in Family Circus are the Sunday comics in which the character Billy is shown taking a long circuitous route, only to eventually arrive at someplace nearby. This is done with the use of a dotted-line showing his travels. Toon Lagoon has a Family Circus strip with Billy breaking the fourth wall and leaving the comic strip, with a dotted line path going across the land.

For newspaper comic strips, there are not many more iconic items than Dagwood Bumstead’s sandwich. Toon Lagoon has a quick service restaurant named Blondie’s, and as you can see by the logo, it basically promises the larger-than-life sandwich created by Dagwood.

Inside the restaurant you’ll see some great signage for one of the world’s most famous food items.

Unfortunately, the actual Dagwood sandwich available at Blondie’s is nowhere near what you expect and is pretty much just a “kinda large” sandwich. We are now in a world in which you can get a hamburger in CityWalk that uses Voodoo Doughnuts as the buns, so I think it’s time we have an actual Dagwood sandwich that lives up to its name. YOU HEAR ME UNIVERSAL?!

There are several characters that can be seen walking about Toon Lagoon throughout the day. Popeye and Betty Boop are out relatively often, but keep your eyes open for the rarer characters such as Bullwinkle J Moose or Beetle Bailey.

Inside Comic Strip Cafe is this wall which is the backside to lockers used for Dudley Do-Right’s Ripsaw Falls. Can you spot some of the incredible references?!

With Disney’s Splash Mountain, we are blessed with not just the best flume ride ever made, but one of the all time greatest attractions. While Ripsaw Falls is filled with the trademark humor (and puns) of the Jay Ward cartoon it is based on, thanks to budget and time constraints under which it was built, it doesn’t have the “wow” factor of animatronics or the immersive scenery that Splash has. What it does have is an amazing facade, several decent drops, and one great drop at the end. In fact, the final drop of Ripsaw Falls can hang with any flume ride and includes a rather interesting surprise, but Ripsaw Falls doesn’t quite end there….

Once guests go down the intense final drop at Ripsaw Falls, most assume that they’ve been through the worst and the ride is over. NAY NAY, this is where the fun really begins. As the logs circle around back to the unload station, they travel under a bridge. This bridge connects Toon Lagoon to Jurassic Park and is quite large. After purchasing a token, guests on the bridge have an opportunity to trigger one of the dozen water cannons aimed directly at the guests on Ripsaw Falls. It can not be expressed in mere words how fun this is (for the guests on the bridge, at least), and seeing the look of surprise from the unsuspecting riders as they get one final blast of water is almost worth the price of admission to Universal itself.

The kids in our family LOVE water rides. Several times when we have gone on Kali River Rapids at Animal Kingdom they have gotten off of the attraction upset because they didn’t get wet.

This doesn’t happen on Popeye’s. You are going to get wet: no ifs, ands, or buts about it. It is impossible to walk off Bilge Rat Barges without getting drenched. One or more people on your raft may possibly drown.

The theming of Bilge Rat Barges is whimsical and fits right into the “straight out of the funny pages” style of Toon Lagoon. Among the drops, waterfalls, and ability for guests not on the ride to spray you with water cannons (like Ripsaw Falls) AND have water dumped on you from a shower head, all the people in the raft are gonna feel like they just took a shower with their clothes on while exiting the ride. Bilge Rat’s length (it’s a nice long trip) and some hilarious surprises during the ride would make it one of the best water rides ever made.

Wimpy’s is one of the “white whales” of the theme park Universe. Many times we run across attractions that have an element that rarely works (we’re looking in your direction bird-on-a-stick at Expedition Everest) or – in Wimpy’s case – a restaurant that is almost NEVER open. For years I had gone to Universal and never saw Wimpy’s open, no matter how busy the park was. After a while I had given up hope that I would ever see its windows open again. I even included Wimpy’s on the SATURDAY SIX 2014 In Memoriam tribute, which in turn led to the first ever SAT 6 retraction when I discovered the restaurant open during a life-changing day in 2015. Since then, Wimpy’s has returned to its once-in-a-blue-moon operating schedule, and I’ve yet to be able to order a long awaited hamburger (which I’ll gladly pay for on Tuesday.)

So there you have it: Six Reasons We Love TOON LAGOON at Islands of Adventure! See you next weekend for the latest installment of the SATURDAY SIX, where we’ll look at something fun from the world of Disney and Universal. If you enjoyed yourself, be sure to check out The Magic, The Memories, and Merch! articles, or, for your listening pleasure, check out the E-Ticket Report podcast. You can also follow Your Humble Author on Twitter (@derekburgan).

Special Thanks to The Elite Brandon Glover, Captain Cruiseline Scott Sanders of the world famous Disney Cruise Line Blog, my personal protege Hunter “Elvey” Underwood, the bio-est of all reconstructs @bioreconstruct, Mr. ‘Ohana Tim Grassey, the SAT SIX Fun Squad of Parkscope Joe and Nick, the possibly insane Parkscope Jeff, hot shot Michael Carelli, and Hermione Granger’s tutor Megan Stump for their invaluable assistance with this article. The SAT SIX is inspired each week by goofballs Aengus Mackenzie and LitemAndHyde and you Potterheads will  enjoy Meg’s other blog work over at the Central Florida Slug Club. 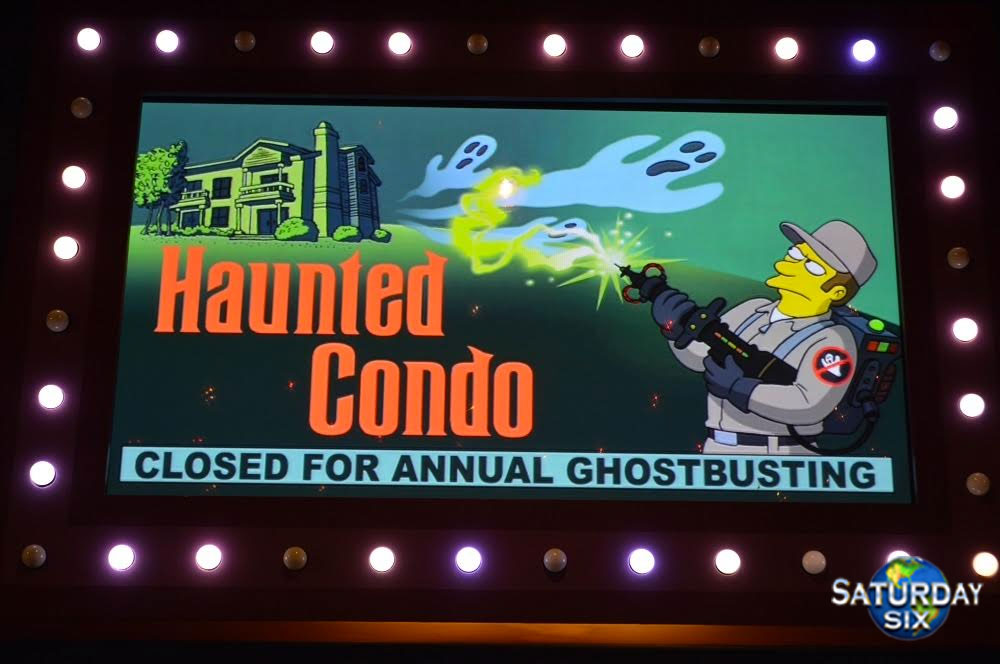