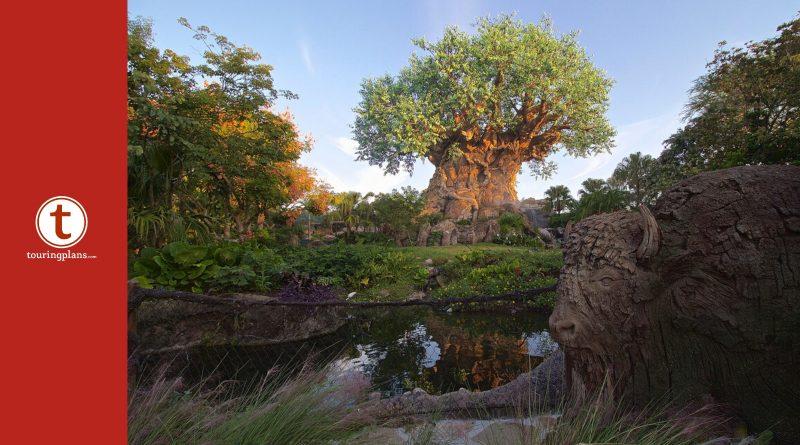 Last week I put together the Top 3 of Everything at Disney’s Animal Kingdom. Now, in honor of this wild kingdom’s 22nd Anniversary, and even though we can’t celebrate in person this year, I would like to share why I love this park so much. I’ve put together my Top 10 of why I love Disney’s Animal Kingdom. But, this is more than my own personal stories. This is about the unique characteristics of this park, and why it is so different than its older siblings.

No other Disney theme park has an arrival experience like Disney’s Animal Kingdom. Sure, the initial arrival from the parking lot or bus depot and through security isn’t out of the ordinary. But, once you pass through the entrance, it’s easy to breathe a sigh of relief and relaxation. A dense oasis greets you. Rather than a bustling avenue with a giant park icon at the end, a collection of babbling brooks, waterfalls, and curious animals welcomes you in. I urge you to slow down and savor this arrival experience. Listen to the sounds. Take some time to explore the animal areas here. Don’t rush.

Every Walt Disney World theme park has a decent array of attractions. However, Disney’s Animal Kingdom variety of experiences run the entire gamut. The one down side is the amount of actual rides. Yet for many theme parks fans, myself included, theme parks are so much more than a bunch of cool rides.

Disney’s Animal Kingdom offers thrill rides, experiences for young children, a variety of live entertainment, and of course numerous ways to view, learn about, and encounter animals. Even the ways you encounter our beautiful planet’s animals is diverse. Animals can be seen on walking trails, in shows, at close encounters throughout the park, and during one of the most ambitious rides ever pulled off.

EPCOT may be known as the “foodie park,” but you should not overlook Animal Kingdom if you love to explore the flavors of the world. And even if you prefer familiar flavors, like good ol’ burgers and fries, you’re covered. My two of my favorite quick-service dining options in all of Disney property are Harambe Market and Satu’li Canteen.

Harambe Market is a relatively new addition to the park and can be confusing to navigate at first. There are multiple lines and windows to order, each offering a different menu. My suggestion is to use the Disney Mobile Ordering to browse the menu and order without having to decide which line to get into. This way you have access to all of the food and just go to the Mobile Order Pick-Up Window. I love the exotic flavors here, but there is still plenty of food that is approachable.

Satu’li Canteen in Pandora – World of Avatar became an instant hit when it opened. A modern interior and fresh, creative entrees make for a dining experience you won’t find anywhere else in the park. The indoor dining area is a great place to escape the heat, with heavily themed decor. The menu has changed a little over time, but the signature entree remains the bowls that you can customize with a variety of bases and proteins.

Every Disney theme park offers ways to interact with beloved characters. Disney’s Animal Kingdom mixes the animal world with the magical world of Disney. Some of the most creative character experiences are offered here. Chip and Dale are dressed as dinosaurs at Dinoland U.S.A. Kevin the big blue bird from UP wanders around Discovery Island. Mickey and Minnie meet guests as a couple, which is rare, and dressed in safari gear. Tusker House Character Dining is one of the easier dining experiences to get into, compared to others, and the characters are dressed to go on safari.

6. The Best Live Show in Any Theme Park

The undisputed best live show in all of Walt Disney World has been a part of Disney’s Animal Kingdom since opening day. Originally the Festival of the Lion King‘s theater resided in Camp Minnie-Mickey, an area that is now Pandora – World of Avatar. Did you attend this show back when the theater was open-air?

Now that the theater resides in Harambe Village, the show’s majesty feels even more jubilant. Although this show has not changed much in two decades, it is timeless and still draws a crowd. Time and again our TouringPlans Survey results rank The Festival of the Lion King as one of the highest rated experiences in all of Disney property. I still get choked up whenever I watch it. When I think about how long this show has had a presence in my life, it brings me joy. One of my fondest memories is watching the show with my young son for the first time and watching his face light up. At that moment I thought about how I’ve seen this show since I was in high school, and now I have a family. It is a must-do and one of the defining attractions of Animal Kingdom.

5. The Best Lounge in Any Theme Park

The moment you step inside Nomad Lounge, just before the entrance to Pandora – World of Avatar, you know you’re in for a delightful experience. Nomad Lounge offers the most immersive, marvelous environment of any lounge inside any Walt Disney World theme park. A beautiful bar anchors one side of the lounge, as comfortable lounge seating welcomes guests throughout the rest of the room. Cream-colored linens, dark woods, and warm lighting create a rich environment. Sketches about the beauty of world travel decorate the room, as do flags that hang from the ceiling that display questions about travel, in hopes of inspiring meaningful conversations.

The loveliness continues outside with a wrap-around porch that offers inviting seating and breathtaking views. Not only is the environment second to none, the cocktails are handcrafted and exquisite, many of which are just as delicious served without alcohol. The food menu is a delight as well. It is the perfect place that feels like an escape from the busy energy of the theme park, yet also a perfect complement to the park’s theme and message.

One of the great qualities of Disney theme parks is they are often designed with a few quiet spots, off the beaten path. Disney’s Animal Kingdom is full of them. The Tree of Life Discovery Trails offer some quiet moments, wonderful views, and a few chance encounters with animals. Sadly, one of my favorite pathways became a designated smoking area for years, but now that Disney made all the theme parks non-smoking, this pathway can be enjoyed once again. It parallels the main walkway between the Africa and Asia portions of the park. You can enjoy babbling creeks and waterfalls, be surrounded by lush vegetation, and catch a few glimpses of the Tree of Life. There are plenty more hidden gems of locations; I would love to hear about your favorite spot.

Aside from perhaps EPCOT’s World Showcase, it is hard to rival the amount of incredible visual details at Disney’s Animal Kingdom. Whether it’s the animal-influenced architecture of Discovery Island, or the near-perfect re-creation of East Africa at the village of Harambe, the level of detail is glorious. I invite you to slow down and observe the details of this park the next time you are able to visit. It is artistry.

The often overlooked park dedication plaque that sits humbly low to the ground at the front of The Oasis reads: “Welcome to a kingdom of animals… real, ancient and imagined: a kingdom ruled by lions, dinosaurs and dragons; a kingdom of balance, harmony and survival; a kingdom we enter to share in the wonder, gaze at the beauty, thrill at the drama, and learn.”

Throughout the park you’re bound to be inspired by the stories and messages that are woven into the attractions and shows. At Discovery Island, the park’s central hub, the message is “Viva Gaia” celebrating the spirit of life.  In the Asia area, aboard Kali River Rapids the message is about the dangers of deforestation. Even in Harambe Market you’ll find a painted wall near a Cast Member entrance that reads “You Are Most Beautiful.” Aside from being a popular Instagram spot, it is a lovely message to everyone. While the park is full of fun, it is also full of meaning.

Some of the most meaningful Cast Member interactions I have ever had at Walt Disney World have happened at Disney’s Animal Kingdom. I can say, especially since I was a Disney Cast Member for nine years and worked multiple roles in Animal Kingdom, it is a special park in which to work.

Maybe it’s the overarching message of the park. Maybe it’s the way stories are told through animals and the natural world. Whatever the reason, I’ve encountered so many Animal Kingdom Cast Members who really got into the story of their land, attraction, or role. When my husband proposed to me in front of the Tree of Life the PhotoPass Cast Member that took the photos was so kind and genuinely happy for us, and our meal at Tiffins that followed was splendid. When we brought our son there for this first time, so many Cast Members showed love and care when they learned it was his first time in a Disney theme park (besides when he was in my belly). During the holiday season the performers in the Merry Menagerie brought tears to my eyes as the interacted with guests in touching ways.

When I worked there I wanted guests to enjoy the park and appreciate all that it offers. This park is full of wonderful memories for me and my family. And, I would love to hear some of yours. Do you have a special memory at Animal Kingdom? What is your favorite thing about this park? Let us know in the comments, and Happy 22nd Anniversary to Disney’s Animal Kingdom.

The Merry Menagerie at Disney’s Animal Kingdom is just one of the many additions for the holidays. This has always been my favorite park and seeing this precious moment with #thisfloridatoddler makes me so happy. #DisneyHolidays #dak #animalkingdom #wdw #disney #wdwap #holidaysatdisney #disneyday 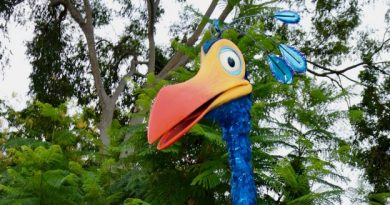 Guests Can Now Meet Kevin from “Up!” 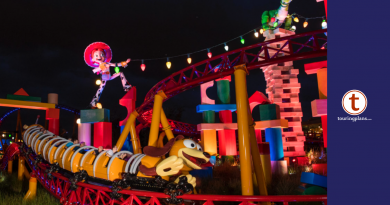