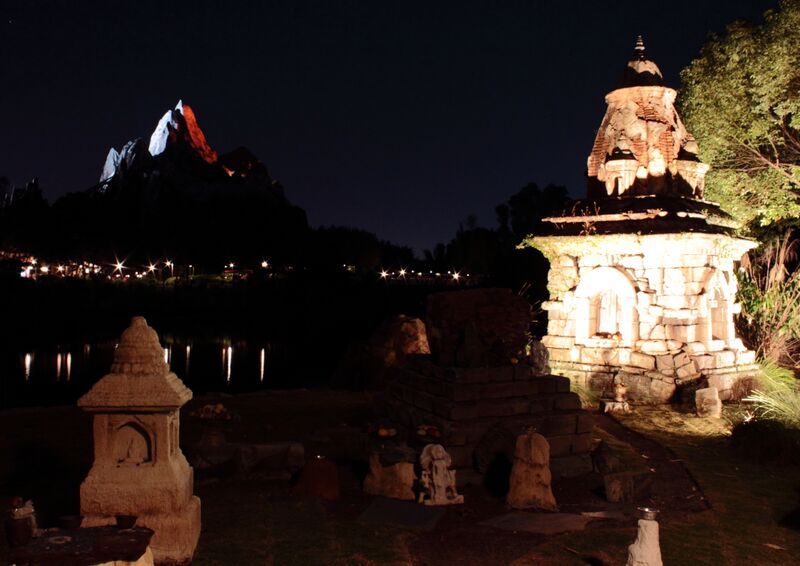 There are many sections of Disney’s Animal Kingdom where music is blissfully absent. Because the Animal Kingdom is such a large theme park, it would be hard to fill in every single space with music and not be a huge bother to people and animals, so the engineers didn’t even try!

I am thankful for that. In a park like the Animal Kingdom, natural sounds should be allowed to dominate. When going from one attraction to another, the music tends to get softer (or mute completely) the further from an attraction, restaurant, or village you go. In the Asia section of the Animal Kingdom, one word can describe the music: authentic. This isn’t music from Japan or China in Epcot transferred over (although there are other areas in the Animal Kingdom where music is taken from other parks). This music takes us into the other areas of Asia through instrumentation and rhythms – places like Nepal, Bangladesh, and India.

The fictional town in Animal Kingdom’s Asia, called Anandapur, is more spread out than the neighboring Animal Kingdom village of Harambe. The songs that you hear are much quieter and blend in more than Harambe’s pop sound.

Here is a listing of a few of the songs you will hear:

These were located using the handy app Shazam, and most can be purchased on iTunes.

I love listening to this area music, because doesn’t attract your attention. Instead, it eases your mind into a calm atmosphere. If any area in Walt Disney World has its atmosphere so well interpreted and blended through its buildings, flora, and music, the Asia area is likely tops above any other.

What is your favorite part of the Asia area of the Animal Kingdom? If you could pick a place in the Animal Kingdom to just sit and meditate, where would you choose? Why didn’t Shazam exist ten years ago when I needed it most? Comment below!

3 thoughts on “Animal Kingdom AtMousePhere: The Music of Asia”