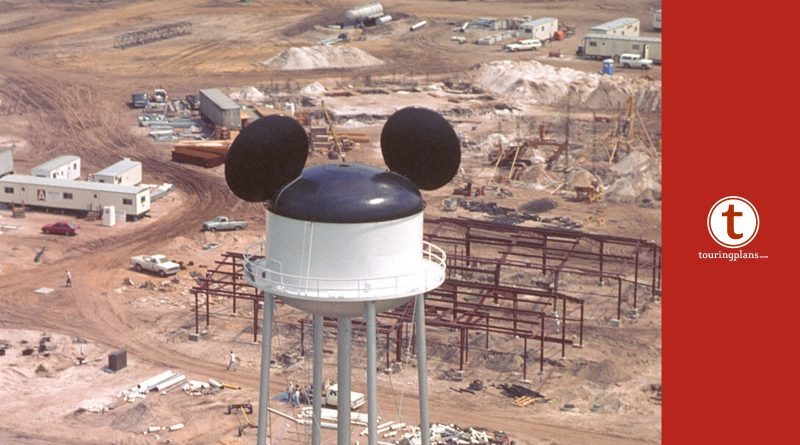 On May 1, 1989, Disney-MGM Studios opened as both a functioning studio and a park which entertained guests with how movies are made. However, the vision of a working Florida studio didn’t last, nor did the novelty of the park’s shows and attractions about movie-making secrets. In 2008, Disney-MGM Studios was renamed Disney’s Hollywood Studios; and in recent years, old attractions and areas closed to make way for new immersive lands.

In fact, Star Wars: Rise of the Resistance, the centerpiece attraction of the park’s Star Wars: Galaxy’s Edge, just opened on December 5, 2019. Still, despite all of these changes, there are remnants and relics left from the park’s first iteration: Disney-MGM Studios. Ready to get nostalgic? For today’s installment of Attraction Archaeology, we’re searching the park for remnants and tributes of Disney-MGM Studios. 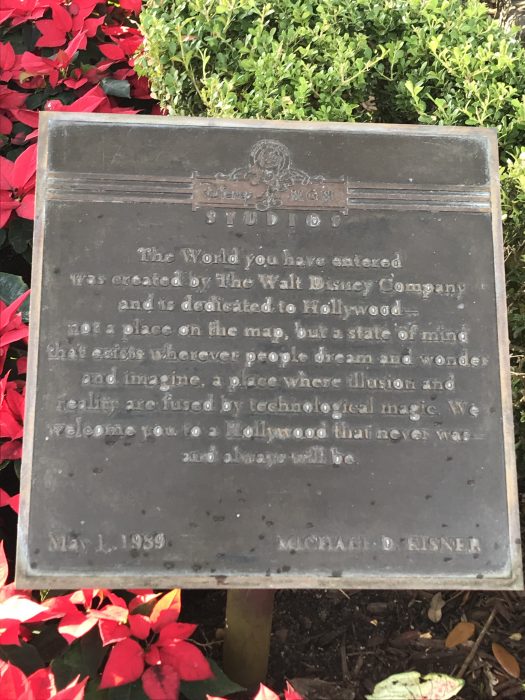 When approaching the park’s hub, look to the left for a statue of a cameraman. Near the base of the statue is the park’s opening day plaque which still bears the park’s original name of Disney-MGM Studios! It reads:

The World you have entered was created by the Walt Disney Company and is dedicated to Hollywood – not a place on the map, but a state of mind that exists wherever people dream and wonder and imagine, a place where illusion and reality are fused by technological magic. We welcome you to a Hollywood that never was – and always will be.

The original icon of Disney-MGM Studios was the Earffel Tower. This water tower topped with mouse ears stood over the park’s Backlot Tour from the first day of the park’s operation until it was removed in 2016. Today, the park is represented by either the Twilight Zone Tower of Terror or the Chinese Theater. 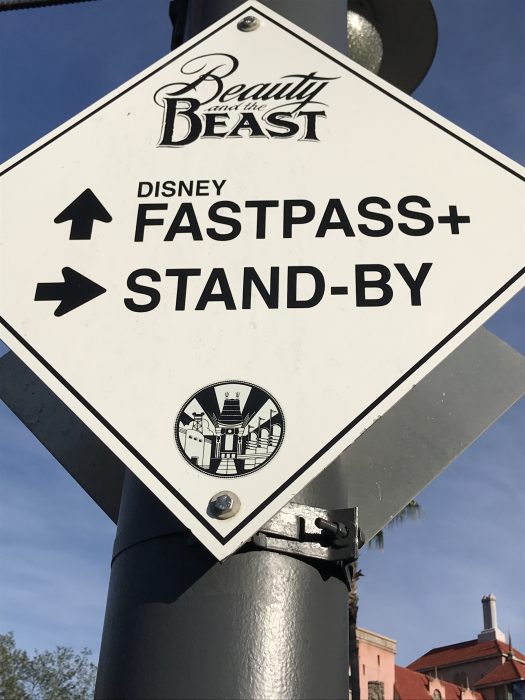 You may have seen this particular emblem around Disney’s Hollywood Studios, particularly on the park’s trash cans. However, you won’t find the Earffel Tower in the background anymore except in this sign on Sunset Boulevard. It’s definitely a relic from the park’s past.

Since Disney-MGM Studios opened in 1989, the park contains a number of the movie references to Disney films popular at that time. For instance, between Hollywood Boulevard and Echo Lake, guests can find Peevy’s Polar Pipeline. This refreshment walk-up window is themed after Disney’s 1991 movie The Rocketeer. When Peevy’s is open, take a look at the props displayed inside and just to the left. You may see the Rocketeer’s helmet and jet pack! 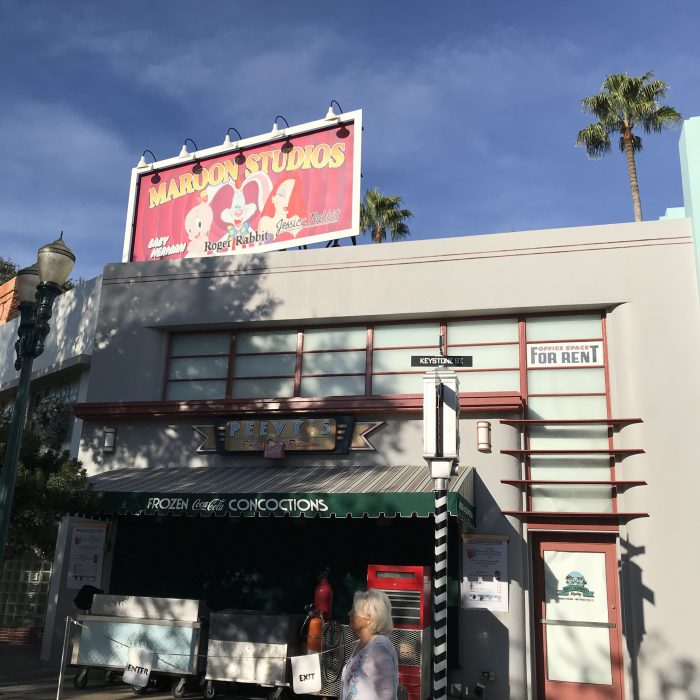 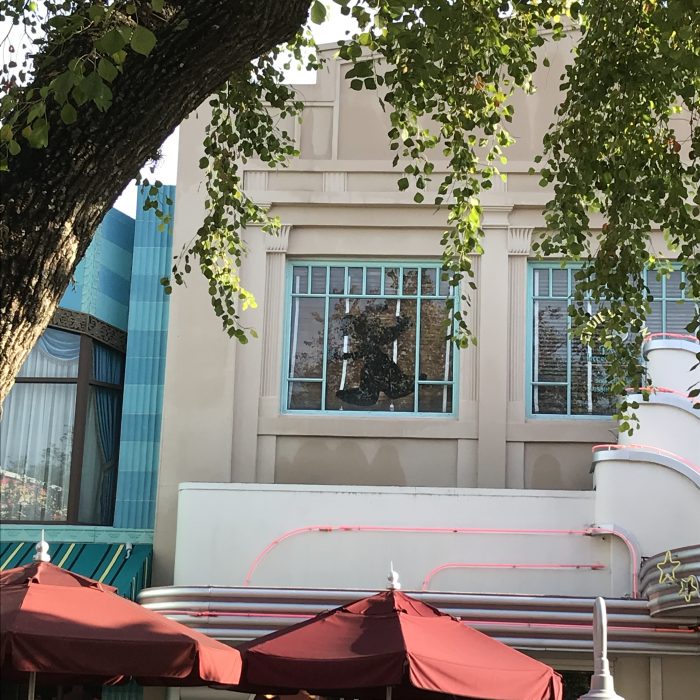 Right above Peevy’s Polar Pipeline is a Maroon Studios billboard showcasing Roger Rabbit, Jessica Rabbit, and Baby Herman. Other references can be found in the windows above the Hollywood & Vine Restaurant. One window reads Eddie Valiant’s Private Investigations. The other contains an outline of Roger Rabbit who crashed through! 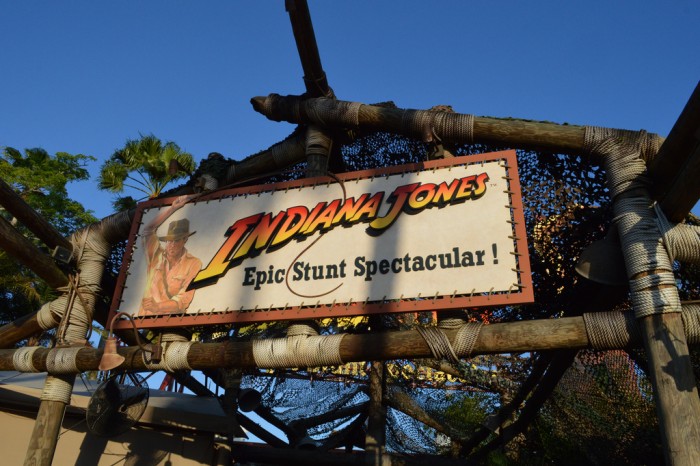 The Indiana Jones Epic Stunt Spectacular! has been demonstrating action film stunt work in replicated scenes from Raiders of the Lost Ark since it opened in August of 1989. After all these years, it’s still a huge hit with guests. But for those who remember Disney-MGM Studios, it’s the last attraction in operation which still shows how movies are made.

Handprints Outside the Chinese Theater

While the Great Movie Ride closed in 2017, the Chinese Theater is the future home of Mickey & Minnie’s Runaway Railway scheduled to open March 4, 2020. 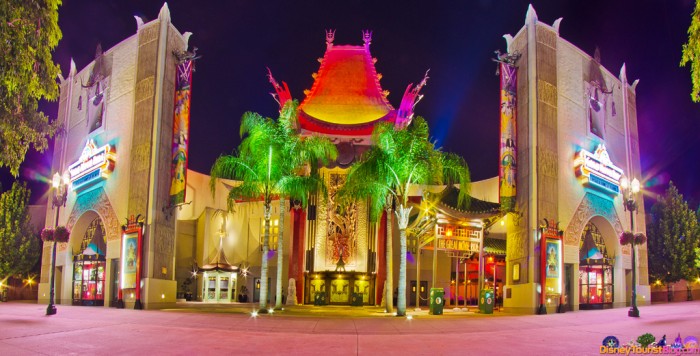 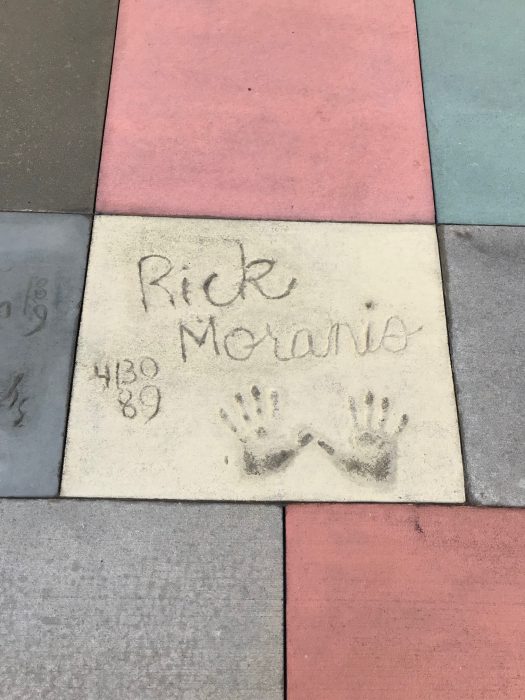 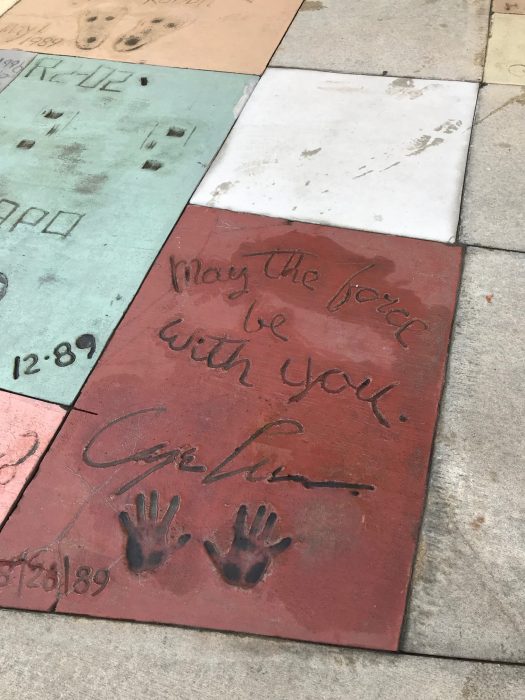 Guests can also find George Lucas’ hand prints of Star Wars and Indiana Jones fame, as well as Mark Hamill’s and even R2-D2 and C-3PO’s footprints. 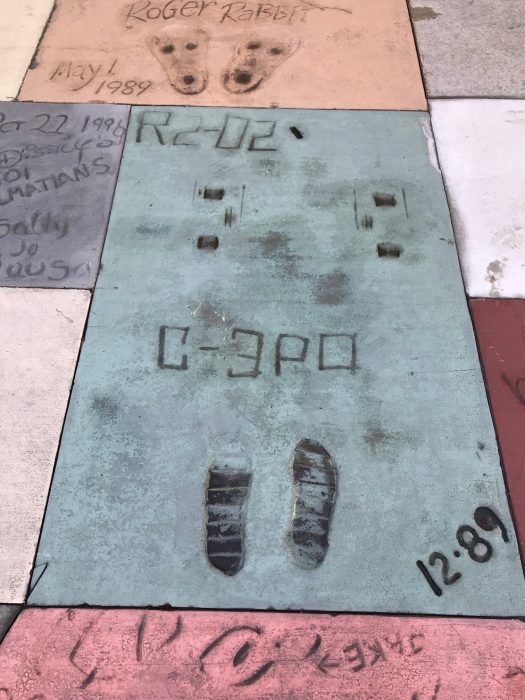 This was because of Indiana Jones Epic Stunt Spectacular! and Star Tours which opened July 12, 1989. However, it makes even more sense now due to Star Wars: Galaxy’s Edge! 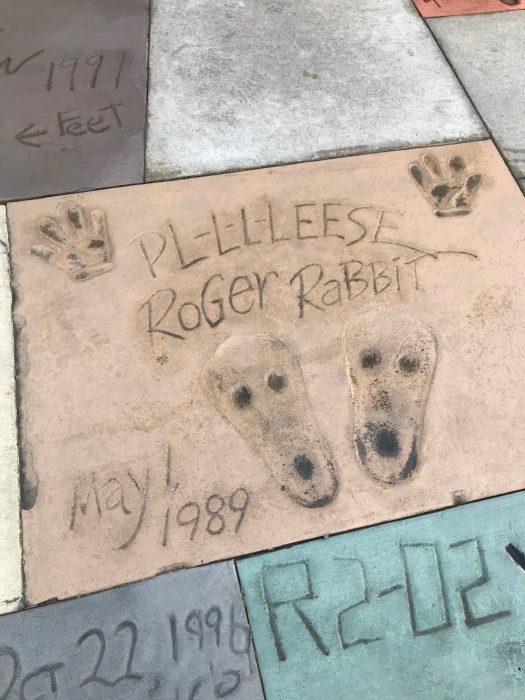 Lastly, Roger Rabbit makes another appearance as his hand and footprints are here. The date of his prints are from the opening day of Disney-MGM Studios. He also included his signature “p-l-l-l-leese!” But one of my favorite set of prints is Jim Henson’s, the creator of the Muppets and the original puppeteer of Kermit the Frog. 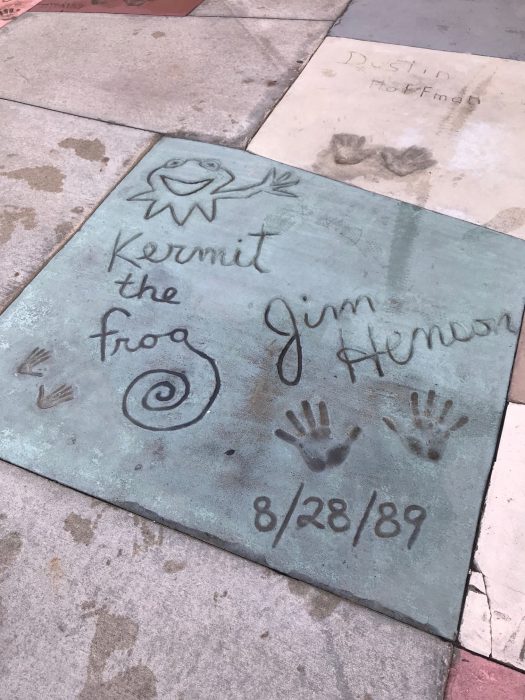 He included Kermit’s hand prints along with his own as the Muppets played an important role in Disney-MGM Studios history.

The Streets of America were two intersecting streets with sets and facades designed to look like New York City and San Francisco. New York Street came first and was part of the original version of Disney-MGM Studios’ signature Backlot Tour when the park first opened May 1, 1989.

Both streets reflected the architecture of their respective locations and were layered with props and details. At the end of both New York Street and San Francisco Street stood force perspective murals. They simulated the continuation of the city streets and their skylines. However, New York Street was unique in that it had a physical Washington Square Arch which stood at the opposite end of the street until the early 2000s.

At times, the Streets of America were used as entertainment locations. In the early years of the park, the Teenage Mutant Ninja Turtles would perform and meet with guests. Some may also remember performances from Mulch, Sweat n’ Shears and the beloved Osborne Family Spectacle of Dancing Lights during the holidays. 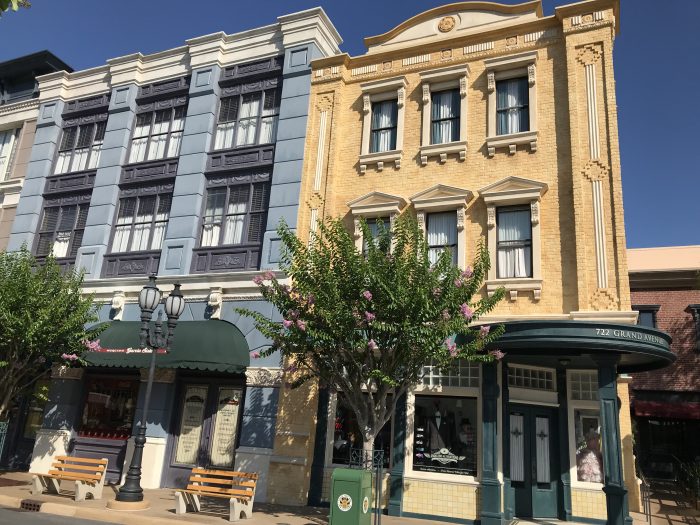 When the Streets of America closed in 2016, Imagineers did preserve a small section of the New York Street facades and re-themed them as Grand Avenue. However, according to its story, Grand Avenue is set in Los Angeles where vintage buildings and warehouses have been converted into new businesses.

Even though Muppet*Vision 3D didn’t open at Disney-MGM Studios until May 16, 1991, the show today is a remnant of the strong Muppet presence in the park during its early years. For example, there used to a show called Here Come the Muppets at the park, and Imagineers even had plans for a Muppet-themed restaurant and other Muppet attractions.

With the addition of Toy Story Land and now Star Wars: Galaxy’s Rise of the Resistance, the future of Disney’s Hollywood Studios is bright and currently offering some incredible theme park experiences. However, for the sake of nostalgia, and for those of us who remember the days of Disney-MGM Studios, it’s fun to look back on what once was and what still remains from that original iteration of the park.