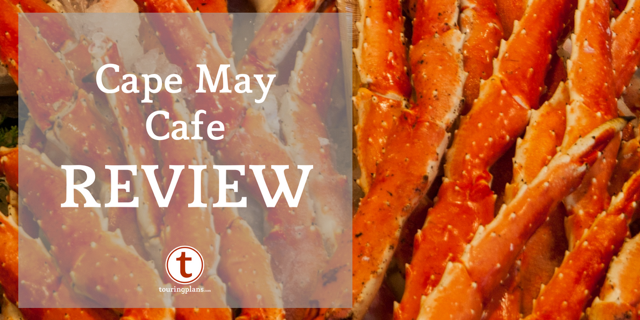 Today, we’re taking a look at dinner at Cape May Cafe. Back in the dark ages when I was in college, my feature writing instructor had a food critic come and talk to us during our restaurant review class. A question came up about how to review a buffet. The critic’s philosophy was that if you plan to eat at a buffet, always go within the first hour of service, as the food will be hot and fresh and quickly replenished. On the other hand, if you are going to review a buffet, always go right before the last hour of service–that will let you know how much they care about their food. You may find food not being replenished, and the quality of some food being lackluster after sitting in a steam tray for hours on end. I’ve done early dinners at Cape May Cafe on many occasions, but rarely eat late. On one particular day, schedules worked out such that a late dinner was the best option, so I snagged a late evening reservation for Cape May Cafe. Cape May is located in the Beach Club resort and offers a character breakfast and a non-character dinner buffet daily. The theme is an old-style New England Clambake. Although there are options on the buffet at dinner for people who don’t like seafood, it is almost impossible to get your money’s worth if you don’t at least like some seafood.

We arrived about 15 minutes before our reservation time, but it took us almost an hour to be seated. In the past, we’ve found that the wait at this restaurant is longer than others, but never this extreme–I joked to my husband that it would be a good chance to shut down the place for the night. Thankfully, a good server can make a rough start to a meal better, and our server (Jenn) was exceptional. The buffet at Cape May is a square. The first side contains cold dishes (salads, peel and eat shrimp) and soup. The second side is the clambake side. The third side has the carving station, breads, and the children’s station. The fourth side has “everything else” in terms of hot dishes. There is also dessert station hidden near the front entrance, and a kid’s dessert station nearby.

One of my favorite dishes at Cape May Cafe over the years has been their house salad (a lettuce blend with blue cheese, dried cranberries, candied walnuts, and a light vinaigrette dressing). It is something where I’d go back for a serving with each course. Unfortunately, that salad is no longer there, and has been replaced with a similar “citrus, almond, vanilla” salad, which was okay but not quite as good and had surprisingly large chunks of grapefruit in it. Other salads included a Caesar salad, a Southwestern salad (with black beans, peppers, and a surprising amount of heat), a kale coleslaw, ambrosia, and a pasta salad with ham. After trying them all, none of them really stood out as exceptional. At the end of the day, who goes to a seafood buffet for the salad, though? (Okay, me for that original house salad, but I’m the exception…) Because they are made in small batches and are the first item people see, I found that the serving dishes emptied quickly, so you may have to wait a few minutes for refills–but they did refill them throughout the evening.

Because I wasn’t filling up on salad, I decided to try some of the clam chowder. Remember above how I said that you could tell the quality of a buffet by how well they kept it filled during the last hour of service? When it came to the clam chowder, even though there was still more than an hour left in dinner service, the soup container was almost empty. Eventually it was refilled, but it was a little off-putting to have to scrape the bottom of the container for half a bowl of soup. I was concerned that with so little left in the container that it might be burnt on the bottom, but it was in good shape, and a wonderfully creamy New England-style clam chowder with ample pieces of clam throughout. On the clambake side, the main attraction–and a signature item for this restaurant–are the crab legs. This is really where you can make or break the value for this meal. Make sure to pile ’em high. They’ll always steam more. Other items to complete the clambake experience include steamed clams, steamed mussels, corn on the cob, and red potatoes. Moving along to the back of the buffet, this is where my jaw dropped about “end of night buffet syndrome”. When we arrived and walked to our seat, I noticed a platter with a variety of cheeses, although it was starting to run thin. By the time I made it through the salads and went to get some cheeses between courses, I saw the buffet servers taking the cheeses from the larger platters and combining them onto a few small dinner plates. Although the dinner plates were refreshed through the evening, it was a bit startling to see the cheeses offered on the buffet like that. At the carving station, the beef tenderloin was a wonderful offering, and cooked very tender. For non-seafood eaters, this is one of the best options on the buffet, especially if you like it with the homemade onion jam. There’s also a surprising amount of bread options on the buffet. It’s bread. It’s a good palate cleanser. It fills you up. The options for kids are surprisingly limited–there’s mac ‘n’ cheese, green beans (although for parents of picky eaters, note that the green beans have butter and black pepper on them), and chicken drumsticks. The kids’ area is set down lower, which makes it that kids could technically serve themselves. On the last side of the buffet are the hot dishes that didn’t fit elsewhere–there’s a couple of pasta dishes, fried fish nuggets, a seafood paella, broccoli with cheese sauce, and (my family’s favorite), fried clam strips. I think that my daughter has eaten her weight in fried clam strips over the years of visiting Cape May. The paella is also a favorite dish of my family–some nights it has chorizo in it, which makes it have a bit of a kick. Other nights it doesn’t, and it is a very mild dish. Once you’ve had your fill of dinnertime food, you have to make sure you save room for dessert. All of the desserts are prepared in two-bite size, with the idea that you can try a variety of desserts without feeling (much) guilt. Selections may vary, but there’s usually some types of mini cupcakes, brownies, flourless chocolate cake, cheesecake, or lemon curd. The dessert buffet can be found in two different locations near the front entrance. The first location has the bite-sized desserts ready to take.

The second location has “kid-friendly” options (cookies, brownies, pound cake) that can have chocolate or caramel toppings added based on personal preference. At the end of the meal, hot washcloths are brought out–and when they say hot, they mean hot. I swear that they put them in something like what they steam the crab legs in to get them as steaming hot as they are. For dinner, Cape May Cafe is a fairly relaxed environment for a meal if you’re situated away from the buffet area. The decor is pleasing, and includes sand castles, vintage swimwear, and seaside-themed murals. Whether the meal is worth it will depend on your eating habits–if you are not a fan of seafood, it will be difficult to get your money’s worth. If you do like seafood, the quality is good, and the variety is above average. Non-seafood options are predictably weak, but the variety of desserts are exceptional. Prices are around $45 for adults and $25 for kids (depending on time of year). Disney dining plan is accepted (1 table service credit), and Tables in Wonderland is accepted. Have you eaten dinner at Cape May Cafe? What’s your favorite item on the buffet? Let us know in the comments.

One thought on “Catching Dinner at Cape May Cafe”