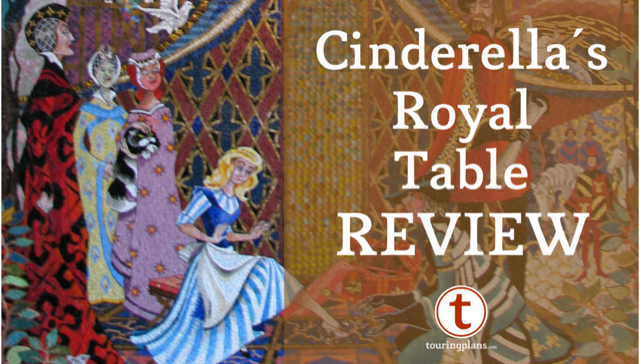 Until the opening of Be Our Guest, if you wanted the “eat in a Disney castle” experience in Magic Kingdom, Cinderella’s Royal Table was the place to go. My daughter and I had never been, and my husband hadn’t been since it was King Stefan’s Banquet Hall, so it was worth the effort to try and make this happen once while our child was still, well, a child.

Before we get to the food and experience, we need to address the two elephants in the room–reservations and price. One does not simply walk into Cinderella’s Royal Table without a reservation. Thankfully, with the opening of Be Our Guest, getting a reservation for Cinderella’s Royal Table isn’t an epic of impossible odds. If you have a specific date and a specific meal in mind, you do need to be on the ball (pun intended) to make a reservation as soon as your booking window opens. If you have the ability to be flexible, more options open to you. I made my reservation for a party of 3 approximately one month out. Most of the times I found were either weekday late breakfasts, which wouldn’t work with work schedules, or late night dinners (after 10 p.m.), which was way too close to the pumpkin hour for our family. But with a bit of checking, I was able to find a Saturday lunch at 11:50 a.m. that worked great for our family. Reservations are available through Disney’s web site or by calling 407-WDW-DINE. At the time you book, you will have to pay for the meal in full, which brings us to the second item to discuss… Price. There’s no question that you’re paying a premium price to book this meal. Adult meals will set you back around $65-80 per person (with breakfast being cheaper than lunch or dinner), and kid’s meals will run around $40-50. Children under 3 are free, however they will need to share food with someone else at the table if you want them to eat. When we dined, our table next to us had a two year old and a five year old, who were happy to split a plate of chicken nuggets. If you have a two year old and an eight year old, a kid’s meal likely won’t have enough food for both to be happy about that, and unless you’ve got a very adventurous young child, the adult meals are likely not going to be something the child would want to share with you.

You’ve made your reservations, and you’ve recovered from the sticker shock–do you really now need to drop another several C-notes at Bibbidi Bobbidi Boutique to get your princess all gussied up for the event? Absolutely not. There’s no requirement for formal wear at Cinderella’s Royal Table, and the princesses who visit you treat everyone equally whether they come in shorts and a t-shirt, a full ballgown, or something in between.

We arrived at the check-in desk, located in the back of Cinderella Castle, at 11:35 for our 11:50 reservation and were told that check-in wouldn’t begin until at least 11:40 (but with the suggestion that coming back right at 11:50 would be best). When we came back at 11:45, there was a sizeable crowd, but the check-in process moved fairly smoothly. Once you’ve checked in, you move into a small waiting room where you wait in line to get your photo taken with Cinderella. PhotoPass photographers are on hand, and you can also have pictures taken with your own camera. Make sure to take a look around while you wait and see if you can spy the hidden Gus and Jaq hidden in this room. Once your picture is taken, and your name is announced (by a person playing actual chimes–no recorded stuff here!), it’s time to walk up the winding staircase to the actual banquet hall. There is an elevator for use by those who cannot negotiate the stairs, however it looked to be fairly small. At the top of the stairs, you are escorted to your table and your meal begins. The kid’s menu is standard Disney favorites–mac ‘n’ cheese, chicken nuggets, plus some more unique options, like turkey pot pie and beef tenderloin. Likewise, the adult menu has a variety of choices for different tastes. Beer and wine wine are also available for purchase. For the meal, you order your appetizer, entree, and dessert all at the same time, that way the food can be brought out without interrupting the clockwork-like flow of character greetings and special events. For kids, in theory they have a choice of appetizers, however every table was brought the cheese and grapes automatically. Without a doubt, my daughter loved this option, as she’s a big fan of cheese. I managed to snag one quick picture before the last of the cheddar disappeared! I chose the Castle Salad. In theory, the mozzarella was citrus marinated, however it tasted like regular mozzarella to me. The salad was fresh and appropriately sized for lunch, but nothing spectacular.

My husband went with the charcuterie plate. It was a good start to the meal, but there are better charcuterie plates at other restaurants at Walt Disney World, like the one at BaseLine Tap House. During our appetizers, the “experience” part of the meal began. Each princess was announced with a quick retelling of their story, however the chatter in the hall was such that you couldn’t hear too much. Still, with a couple of key words, it was easy to tell who was coming out. The princesses circled around to the tables, spending a few minutes at each for photographs and autographs. Overall, they provided a combination of very canned comments (for instance, Aurora asking us if we would be ready for a nap after the meal), and also some personal comments (like Snow White complimenting my daughter on having beautiful short hair just like her). You can’t beat the efficiency of meeting princesses at this meal. In addition to meeting Cinderella before you come in (she doesn’t make an appearance in the main dining room), you are visited by Snow White, Aurora, Ariel, and Jasmine. Although the meet and greet doesn’t feel rushed per se, you can tell that they’re moving very systematically from table to table on some sort of internal schedule. As the princesses made their rounds, our entrees came out. I ordered the chicken with smashed potatoes and seasonal vegetables (in this case, squash and rainbow carrots). The portion size was good, and the chicken was juicy. The Madeira-mushroom sauce had a surprising amount of black pepper, but went well with the potatoes and vegetables. My husband ordered the fish of the day, cobia served on spaetzle with a tomato-based sauce. The fish was nicely seared, but not dry. The spaetzle was mixed with peas and pearl onions, both of which went well with the sauce. And Lily ordered chicken nuggets for a familiar comfort food. She enjoyed them, and said that the mashed potatoes were good, but didn’t have any desire to try the corn. Each child at the table also received a wishing star. As the princesses neared the end of their rotations, with a loud fanfare, it was announced that it was time for kids to make their wishes. With much wand and sword waving and many chants of Bibbidi Bobbidi Boo, the wishing stars were filled with wishes and a bit of Disney magic happened in the hall. (I won’t spoil it for those who haven’t gone.)

After that bit of Disney magic, it was time for dessert. My husband ordered the citrus chiffon cake. It was very light in texture and mild in flavor. The raspberry sauce was a must to bring some flavor to the dish. On the flip side, I ordered the no sugar added lemon sorbet with blueberries. A word of warning–you really have to like lemon to be able to survive this sorbet. It is absolutely mouth-puckering, cut only by the fresh blueberries. (I enjoyed it, but even I couldn’t finish the two scoops!) By far, the best presentation of dessert was for the kids, with a decorate your own cupcake. There were actually two small cupcakes, one vanilla and one chocolate, which provided a lot of fun for kids at each table. Because we hadn’t ordered alcohol, when we were finished with the meal (which was prepaid at the time we booked), we were able to get up and leave. As we walked out, my husband remarked that it was just like being back on a cruise. In many ways, the meal had a lot of similarities to one of the experience-based meals on the ship (like Animator’s Palate or Tiana’s Place). The food was good, but not something that alone would justify the price. The setting, of course, was priceless. Being able to look down into Fantasyland from the castle is a once-in-a-lifetime experience. Because of the once-in-a-lifetime vibe to it, it is not a meal that I likely would ever do again. I’m certain there will be some people out there who disagree with me on this, but price aside, once you’ve had the experience once, it would be hard to replicate the feelings of seeing it all happen again. The only way I’d go back was if I brought children with me who hadn’t been before, so they could experience the wonder. Was it worth the cost to do once, however? Absolutely–even if you have a child who isn’t that much of a fan of princesses. (But for the meal, suddenly there was a whole lot of princess love going on for her! Don’t believe me, here’s some more princess photos as proof.) Have you ever eaten at Cinderella’s Royal Table or, way back in the past, at King Stefan’s Banquet Hall? Do you think that the experience is worth the price? Do you consider it a once-in-a-lifetime experience or is it something you would repeat on subsequent vacations? Let us know in the comments.

14 thoughts on “Cinderella’s Royal Table: Worth the Hype?”