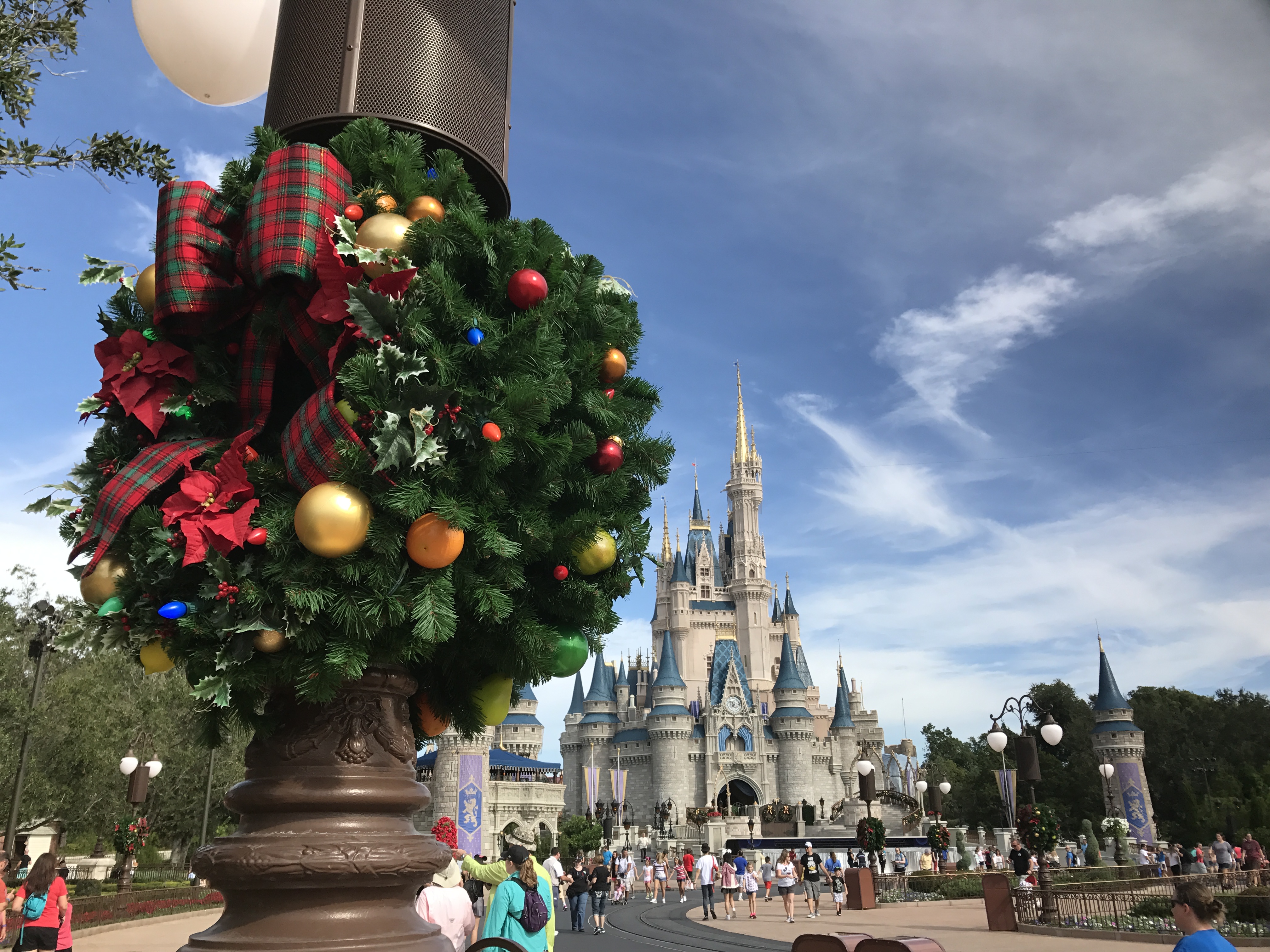 The most merriest of seasons has started to arrive at Walt Disney World. Like hanging ornaments on a tree, it takes a little time for the vacation kingdom to become full dressed in holiday regalia. The first shiny ornament that Walt Disney World unwraps each year is the Magic Kingdom. For well over a week, Christmas decorations, music, and a few festive shows have ushered in the holiday season at the most attended theme park in the country. In the air there’s a feeling of Christmas
Children laughing, people passing
Meeting smile after smile
And on every street corner you hear

I awoke one weekend morning with as much zeal and excitement as my younger self did on Christmas. It is rare that I head to the theme parks in the morning. When I was a kid I couldn’t have any fun until my chores and homework were done; as an adult I still often impose such rules on myself. Arriving around 9:30 AM on a weekend resulted in a little bit of a back up at the parking toll and throughout the parking lot, but seeing the wreaths on the parking plaza kept my impatience at bay. Once on board the tram I quickly became covered in goosebumps because the t-shirt and shorts I was wearing did not combat the slightly chilling morning air. I’m a Florida girl so anything below 72 degrees Fahrenheit is chilly to me.

The holiday spirit continues at the Ticket and Transportation Center with decorations, festive music, and red scarves adorning the Mickey and Minnie topiaries. Apparently not having learned my lesson from the chilly parking tram ride, I headed for the ferry boat. The views along the Seven Seas Lagoon made it worth it, though. As soon as we disembarked the ferry boat, a solid wall of humanity welcomed my fellow park guests and I to the most magical place on Earth. The center entrance was blocked off by construction walls and thus everyone coming from the ferry boats and bus depot had to enter through the right hand entrance. With as backed up as it appeared to be, it took just under ten minutes to get through security and through the park entrance. The journey to the Magic Kingdom can certainly take it out of you. Once upon a time, this journey seemed magical, a way to transition from the real world into this magical kingdom. However we all have shorter attention spans so for many guests the journey from the parking lot to the actual entrance of Magic Kingdom seems like a chore.  Yet, that all seems to melt away the moment you are on Main Street USA, the Magic Kingdom wrapping its arms around you. A delighted giggle escaped my chest as I set eyes on all the decorations in Town Square. The classic Christmas Tree that towers above Town Square is the perfect height to stand under and feel like a kid again. I strolled down Main Street USA, pausing to admire one of my favorite sights of the season: Mickey’s Christmas Carol as retold in the windows of the Emporium. Just after these windows the Lego Cinderella Castle set stood proudly in a window display that immediately caught my eye. Continuing toward Cinderella Castle I admired the additional wreaths that now adorn the new castle hub area. This moment of holiday glee was interupted by my growling stomach. Remembering that I had not yet had breakfast I considered where I could go to have a quick protein-rich snack. I decided to visit the snack cart in between the entrances of Adventureland and Liberty Square. For $5.00 I purchased a substantial serving of cinnamon glazed almonds. I noshed on them as I headed into Liberty Square to go see the Muppet’s Great Moments in American History show. Liberty Square is one of the few spots outside of Main Street USA that continues to feel festive. Garland wraps around lamp posts and a few decorations are added to Ye Olde Christmas Shoppe. My attention quickly changed from Yuletide to Patriotism as the Muppets show began. This show breathes new life into what many consider to be the sleepiest land of the Magic Kingdom. The zany, pun ladened humor of the Muppets is executed masterfully. However, the educational component of this show pales in comparison to the sheer entertainment, and I am somewhat ok with that. There are two versions of the show, each show time alternating back and forth. I caught the 10:20 AM show which centered on the Declaration of Independence. It caused quite a few laugh out loud moments. Lunch time neared, but there was still time before my reservation at Skipper Canteen and when I was to be joined by my friend. So I headed into New Fantasyland curious to check out the Christmas decorations in this area. Although New Fantasyland isn’t really new anymore, I am still getting familiar with it. I had forgotten that there are themed decorations in the Belle’s village section and I love how Gaston uses antlers in all of his (Christmas) decorating. After strolling through New Fantasyland I craved a pick-me-up, a little caffeine boost, but I didn’t want to head up front to Starbucks so I took a chance and headed to Cheshire Cafe, near the Mad Tea Party. This little spot used to be home to one of my favorite sweet treats ever, the vanilla cake in a cup. Sadly this dessert is no more, but I had hoped an iced coffee from here would give me the boost I craved. Instead it was awful! It is a super sweet beverage that did not resemble iced coffee at all. For $5.00 I wish I had walked the extra five minutes to Starbucks on Main Street. Oh well.

A ride on the Tomorrowland People Mover (I still prefer to call it the TTA) perked me right back up, especially since we got the front car! The beautiful blue skies framed our view of Tomorrowland and Cinderella Castle as we embarked on our little tour. The call of adventure beckoned; time to dine at Skipper Canteen! This was my second time ever dining here and I looked forward to trying some of the new menu. There are two new entrees, a new salad, and a reimagined entree returning from the original menu. And the souvenir mugs have finally returned, albeit a much different version.

Both the Schweizer’s Slush and the Punchline Punch are packed with flavor. The slush is especially intriguing with its topping of green apple boba, I gravitated toward the punch and found it easier to drink. The spicy rim is entirely optional, but I found that it added complexity to this mango and papaya juice drink.

We opted to try the two new entrees, the Tastes Like Chicken Because It is (the menu lists it as $23.00 but our receipt showed $24.00) and the Whole Fried Fish ($30.00). Both are relatively affordable considering the portion size, the quality, and the fact that we are in the middle of the Magic Kingdom. The Chicken is fried, nicely crispy with a sweet chili with rice and vegetables. I took a few bites and enjoyed the flavors and very subtle spice.

Skipper Annette’s latest catch (get it? Annette? A net?) is served fried and whole. This fish is either Branzino or Lion Fish depending on what is available in market. During my visit it was Branzino and I couldn’t resist because Morimoto Asia introduced me to whole fried Branzino and it was amazing!

The Whole Fried Fish at Skipper Canteen delivered a nice, meaty piece of fish. It lacked the level of flavor that the chicken entree provided, but I still devoured as much of it as possible. I did long for some substantial vegetables as opposed to the grilled scallions that did nothing but add some green color to the plate. I’d be curious to try this again when Lion Fish is available.

Skipper Canteen fed our hunger and now adventure of the yuletide variety called to us. Our FastPass+ window for Jingle Cruise had arrived. Dining here right before or after a trip on the Jungle Cruise (currently Jingle Cruise) is a perfect pairing. I had a bounce in my step as we approached the entrance, so much festive and tacky decor all over the ride entrance. And then I heard the music. Oh how I love the 1920s – 1940s era in holiday music. There was a little extra holiday magic in the air as each skipper realized I was wearing a Jingle Cruise t-shirt. They definitely took notice.

I could stand on the loading dock of Jingle Cruise for hours (maybe I should pick up a part time gig as a cast member again?), the music alone makes me happy, but the decorations throughout the queue, the use of lights that resemble old C7 and C9 light bulbs, and the Christmas puns fill me with glee. I nearly missed my boat I was so enthralled in it all. Once on board my fellow passengers and of course our skipper took notice of my shirt, thus not only calling me out, but also giving me permission to laugh unabashedly at every single joke. I ate it all up. Yes, I’ve seen Jingle Cruise before, but this holiday season is a little extra special to me and this day proved to be the perfect way for me to kick off the most wonderful time of year. As we disembarked, my favorite version of my favorite Christmas song came on, “Have Yourself a Merry Little Christmas” by Ella Fitzgerald. One of the skippers at the exit leaned over and thanked me for wearing my Jingle Cruise shirt, stating that many guests were not pleased with the attraction. I suppose if this is your one and only trip to the Magic Kingdom you might be disappointed in not being able to experience the regular version of the attraction. Maybe I am biased since I am an annual passholder, but I am all for seasonal overlays on attractions. I’m still mourning the loss of the holiday version of the Country Bear Jamboree.

Continuing in the spirit of silly and zany humor, we headed toward Liberty Square to catch the Muppets Great Moments in American History a second time. My friend had not yet seen the show, and this time I got to see the Paul Revere story.  Just like the earlier show the audience chuckled and laughed throughout.

As we headed out I took in a few relaxed deep breaths. My favorite time of year is here. Kicking off the holiday season at the Magic Kingdom seemed like one of my best days ever, but later in the week I went to Epcot for the last day of Food and Wine Festival and then the next day to Disney’s Hollywood Studios for the premier of “Jingle Bell, Jingle BAM” (check out my review). Now that the holidays are in full swing at Walt Disney World, it’s the best time of year, ever! 4 thoughts on “Dani’s Best Week Ever November 17, 2016: It’s Christmastime in the Disney World”