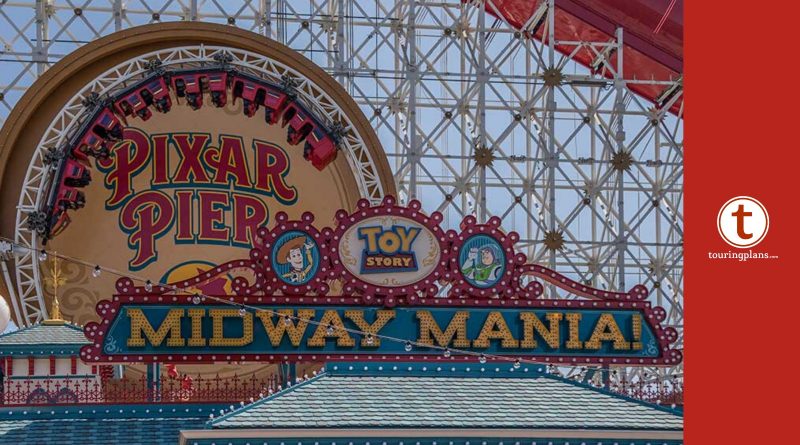 What is Toy Story Midway Mania?

Toy Story Midway Mania is an interactive, shooting gallery-type game along the lines of Buzz Lightyear Astro Blasters, except that rather than shooting physical targets with a light gun, you’re using a rope-plunger device to launch rings, darts, and other objects at virtual targets in scenes inspired by PIXAR’s Toy Story movies. Don your 3D glasses and get your shootin’ arm all loosened up for a fun and competitive experience!

Where is Toy Story Midway Mania?

Toy Story Midway Mania is located in Pixar Pier at the very rear of the part, in the shadow of The Incredicoaster. The fastest path from the park entrance is highlighted on the map below. 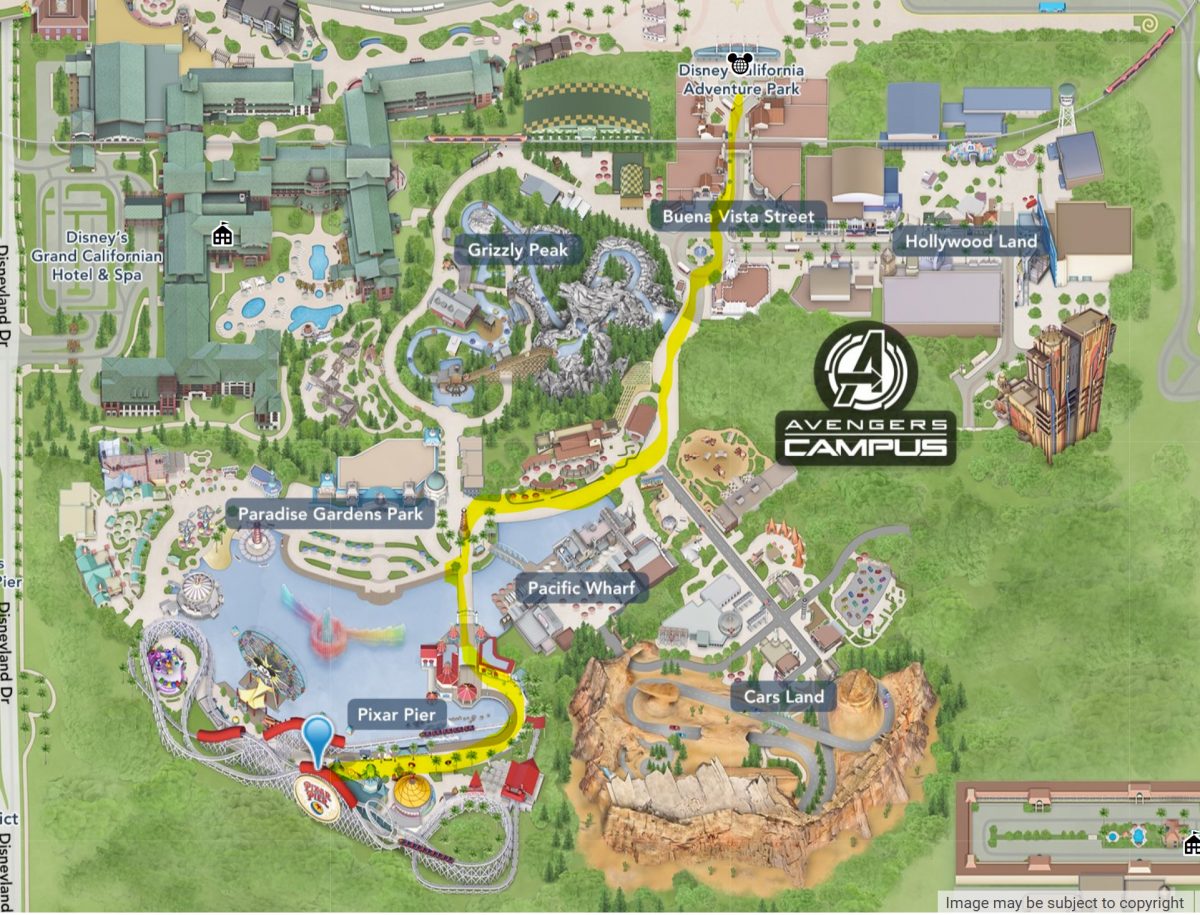 Toy Story Midway Mania opened on June 17, 2008, just a few weeks after the first version of this attraction opened at Walk Disney World. It has persisted in more or less the same state without major modification since then, though it did receive a new entrance with the opening of Pixar Pier on June 23, 2018. It operated as a standby-only attraction before FastPass was added on April 6, 2017.

The queue for Toy Story is largely unremarkable, and is basically just a series of switchbacks with some carnival-themed decor.  Closer to the boarding area, however, an interactive Mr. Potato Head animatronic will entertain guests with jokes and observations in real time about the guests; it’s well done, and generally something that people enjoy. The entire queue is outdoors; it is covered to provide some respite from the rain and sun, but when it’s hot, it’s hot, and it can be unpleasant in the middle of a hot summer day. The queue is built to accommodate wheelchairs and ECVs, so guests using those can enter the main queue.

What is the Ride Experience Like for Toy Story Midway Mania?

Toy Story Midway Mania is, in a word, fun! You’ll be whisked from screen to screen and given the opportunity to play carnival shooting-gallery games in several different Toy Story settings. Certain targets will create interactive effects, like a rocket launching directly at you as you’re hit with a blast of cool air, and other targets will cause more targets to spring to life. Between scenes, you’ll be spun and twisted around before being deposited in front of another scene for another round of gameplay. Prepare for your arm to be sore, especially after the bonus round at the very end where you’ll be frantically shooting targets as fast as you can to max out your score.

It’s frankly more of a video game than a theme park ride, but Disney does a good job of making it feel like you’re doing more than just sitting in front of a screen launching objects at targets. The competitive aspect also makes it easy to re-ride; you’ll want to rematch your friends, or see if you can improve your score when you ride again.

What are the Ride Vehicles Like for Toy Story Midway Mania?

The attraction uses two-person bench-style vehicles with a pull-string-style pop-gun for each seat. You might be able to squeeze a small child in there as well, but they would not have a gun to play with; it’s designed for two players. Each seat has an individual lap bar as the restraint. 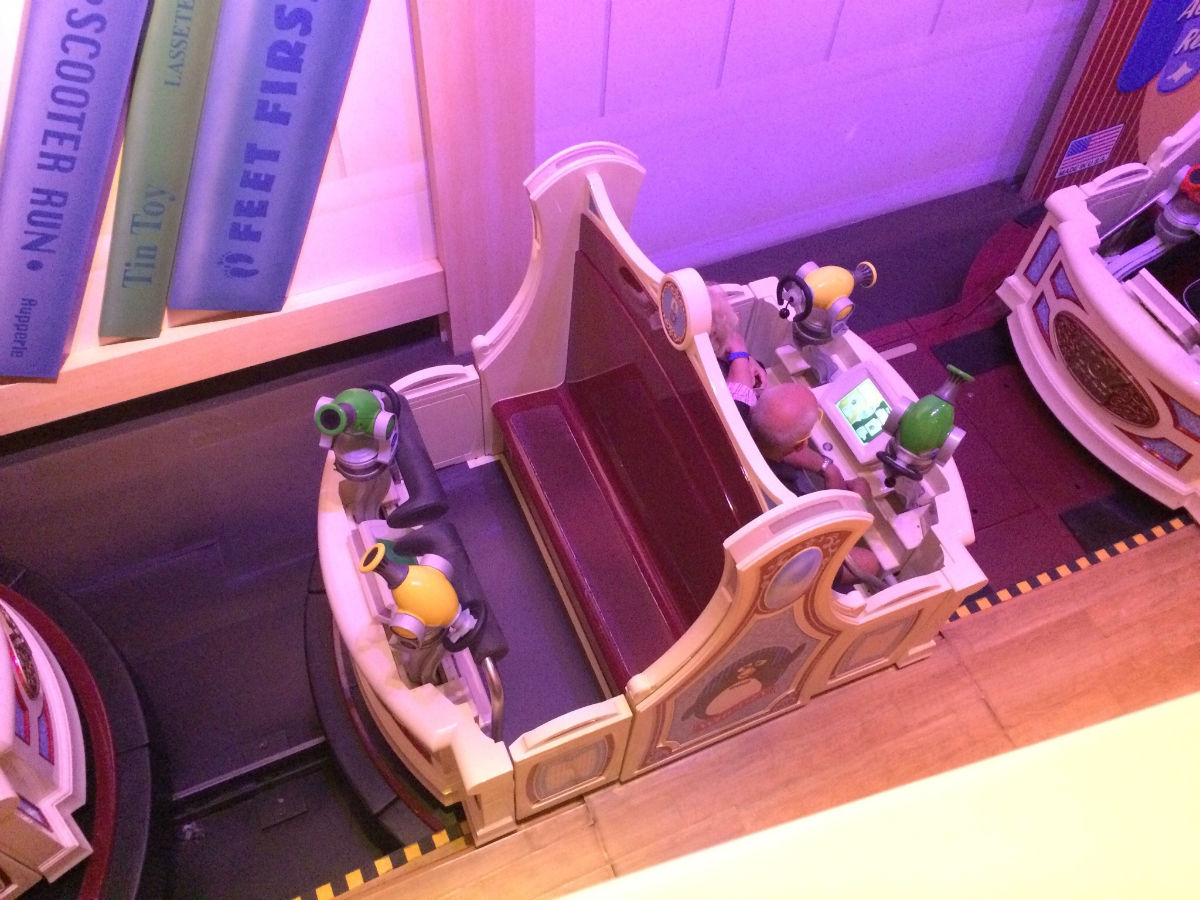 Guests do need to be able to transfer into the ride vehicle to be able to ride Toy Story Midway Mania. Guests in wheelchairs and ECVs should use the main queue; you will be directed by a cast member as you approach the boarding area where to go for loading from a wheelchair/ECV. Some pre-show monitors have guest-activated captioning.

Toy Story Midway Mania does not carry any special safety warnings and is intended to be appropriate for all audiences. The ride does spin and twist you around during transitions between scenes, but it doesn’t present an issue for most riders.

What are the Height Restrictions for Toy Story Midway Mania?

There are no height restrictions for Toy Story Midway Mania, but guests under 7 must be accompanied by someone 14 or older.

The attraction is indoors and will run rain or shine. The queue is under cover so unless there is blowing, driving rain, you should remain dry even if its raining. The queue is shaded, but when it’s hot, it’s hot.

Toy Story Midway Mania is a major attraction and has the potential to generate large lines, particularly in the middle of the day. Note that Toy Story Midway Mania will close, along with the rest of Pixar Pier, when World of Color is running. Accordingly, the best strategy is to target it early in the day or use FastPass. Expected wait times on a crowd-level basis are noted below, but be sure to check out the expected wait time for the date you intend to be there. 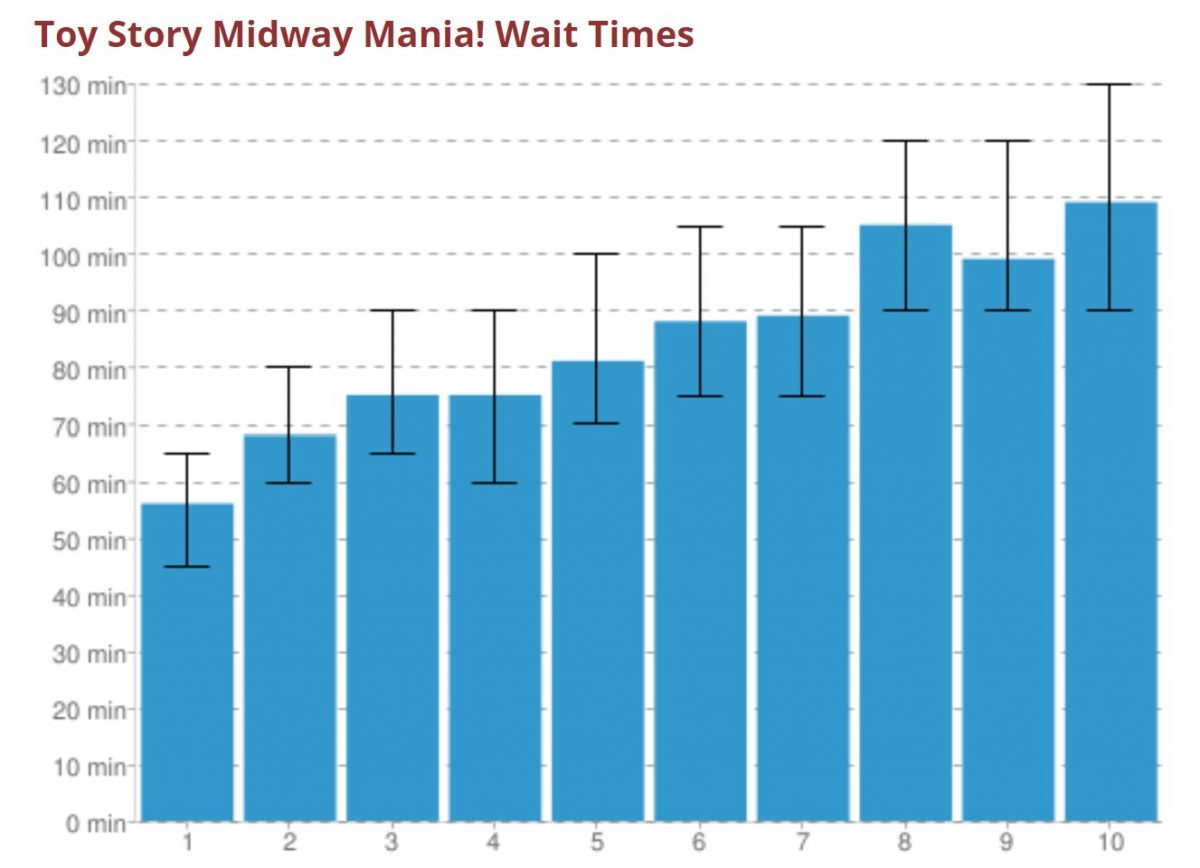 Do you have a favorite scene in Toy Story Midway Mania? What’s your best score? Let us know in the comments!