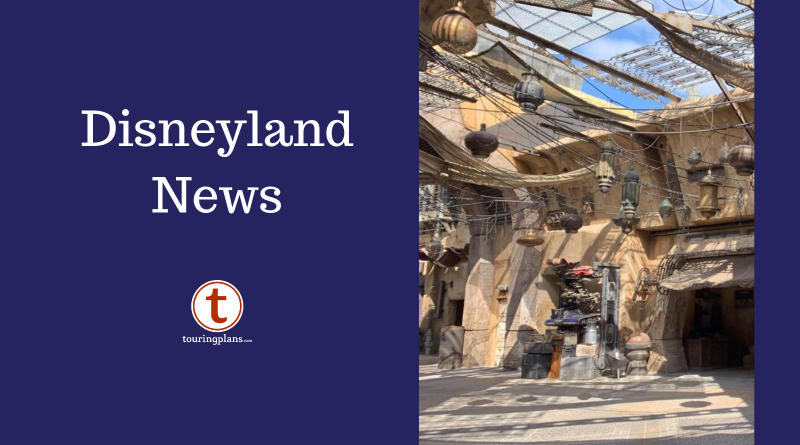 This IS the day you’ve been waiting for! Star Wars: Galaxy’s Edge is here! Read on to find out about this and more in this week’s Disneyland news.

Let’s get right to what I know everyone is wondering about: the official launch day for the long-awaited Star Wars: Galaxy’s Edge is Friday, May 31, 2019, and this will be the first full week of operation for the new 14-acre expansion at Disneyland Park. So, what can you expect? First and foremost, crowds — guests can walk single file to hide their numbers as much as they like, but there’s no hiding the fact that we’re still expecting very large crowds at Disneyland this week. While you’ll note below that resort-wide crowds are not horrible, the people that are there will be significantly skewed towards Disneyland Park. For example, while the resort-wide crowd level is predicted to be a 6 on Saturday, we’re predicting a level 9 at Disneyland Park, while only a 3 at Disney’s California Adventure. This trend will continue throughout the week (and probably for the foreseeable future), so make sure you check the per park crowds before you go, which are available on our Crowd Calendar.

It’s worth a reminder that between now and June 23, the only people that will be allowed to enter Star Wars: Galaxy’s Edge are those that have reservations. We are anticipating throngs of people without reservations trying to visit Galaxy’s Edge anyway, either because they don’t realize they need a reservation or because they think that they can talk their way in. Disney Cast Members are not weak-minded fools, however, and rest assured that those Jedi mind tricks will not work on them. I know that no true Star Wars fan wants to know the odds, but keeping it real, your odds of getting in without a reservation are probably far worse than 3,720 to 1.

At this point, all reservations to the general public are booked;  if you want one, you’ll have to have a reservation at one of the three Disneyland Resort hotels, which automatically entitles you to one reservation per person during your stay. I did a few spot checks over the course of the next few weeks, and there are still rooms available, so if you’d Luke to go (and have a place to Leia your head for the night), you still have the opportunity to do so. That said, I wouldn’t dawdle. Starting on June 24, however, you will no longer need a reservation, and Disneyland will instead utilize a virtual queue system.

Erin Foster has pulled together a Jabba-sized bounty of details about Star Wars: Galaxy’s Edge. You should absolutely give this smuggler’s hold of information a read and probably bookmark it; it contains everything you’ll need to know to prepare for your visit to Batuu.

In non-Star Wars-related news, Disneyland Forever, the nighttime fireworks and projection show at Disneyland Park, will be returning on Friday, as Mickey’s Mix Magic comes to a close.

Also on Friday, Disney will kick off its celebration of the 25th Anniversary of The Lion King at Disney’s California Adventure. Expect storytellers, African song, dance, artwork and crafts, and more! The stage show will take place at the Palisades Stage.  Check here and in-park times guides for more details.

Finally, Grad Nites continue at Disney’s California Adventure. The events themselves are after hours and shouldn’t seriously impact crowds, but you might well see more grads-to-be in the hours leading up the event. This week, Grad Nites will be held on Tuesday, Wednesday, and Friday.

It is officially the summer travel season, and that means you can expect crowds to tick up dramatically — and this is even more the case at Disneyland Park, which will have much higher levels than the resort-wide crowd levels on account of the opening of Star Wars: Galaxy’s Edge, as noted above. It would also not be surprising for attractions to have higher than expected wait times as people that aren’t able to get into Galaxy’s Edge look for something else to do. If you’re looking to avoid big crowds, your best strategy is going to be to head to California Adventure. 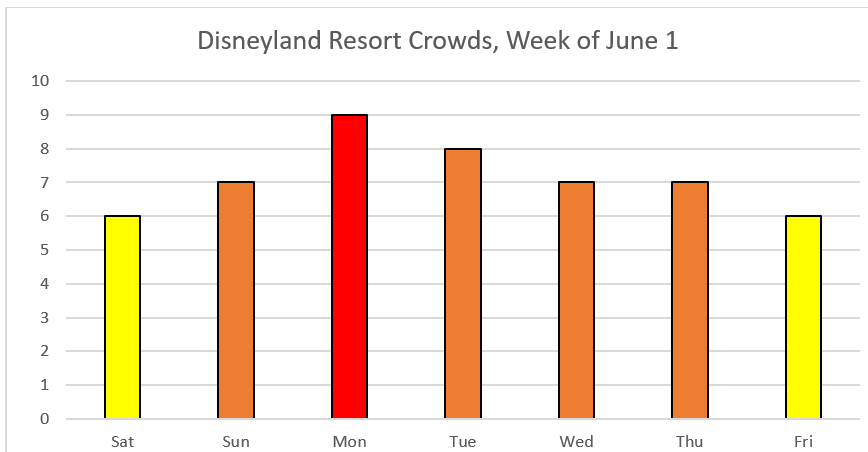 It’s largely more of the same this week, though a bit warmer than it’s been. Highs will be in the 70s, and there are only a few days with a light chance of rain. 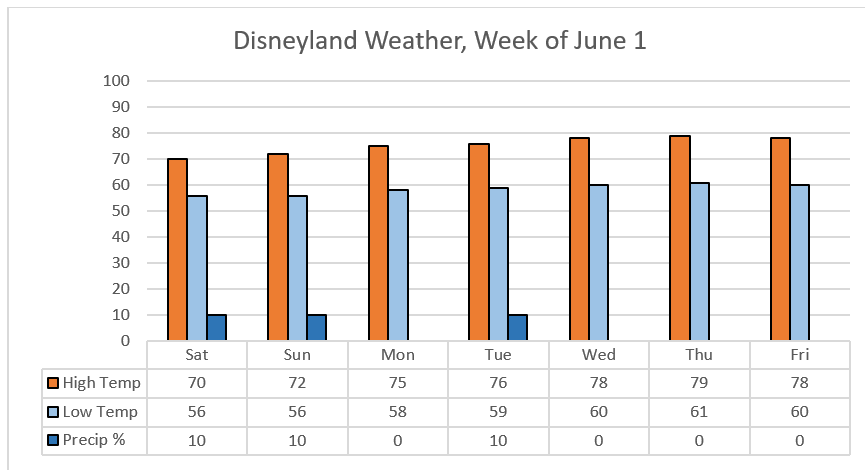 Disneyland has a full slate of entertainment all week long with the exception of Sunday, when Disneyland Park will close to the public early for the US Travel Association’s International Pow Wow event that evening. Note that Thursday will be the last showing of Mickey’s Mix Magic — after that, Disneyland Forever will return as the evening firework spectacular. Detailed show schedules, including smaller diversions like The Dapper Dans, can be found here.

As a quick side note, Mickey’s Mix Magic will be going away on June 6, so if you haven’t seen it yet, or want to see it again before it disappears, make sure you see it soon!

For those of you buying tickets as day guests, single-day tickets are Peak Price ($149/$141) all week long.  Regular park hours are as follows this week; note that Disneyland Park will close at 6 pm on Sunday for a private event:

For early admission, the parks will open one hour early for eligible guests at Disneyland Park Saturday, Tuesday, and Thursday, and at Disney California Adventure Sunday, Monday, Wednesday, and Friday. Resort guests can take advantage of these hours every day of their stay for Extra Magic Hours, while guests eligible for Magic Mornings can use that benefit one day at Disneyland Park only. Star Wars: Galaxy’s Edge is not available during early entry and remains governed by the reservation system. Full park hours can be found by clicking on each date in the Crowd Calendar.

At Disneyland Park, literally everything is open this week. Over at California Adventure, the Red Car Trolley is remains dark until next spring. As always, however, refurbishments can pop up unexpectedly, so check out our refurbishments page to make sure your favorite ride is still running, and for details on exactly what will be down and for how long.

That should do it for this week’s news. Check back next week and every week to find out what’s coming down the pike. Got questions? Aware of anything else that prospective guests should know about? Let us know in the comments.