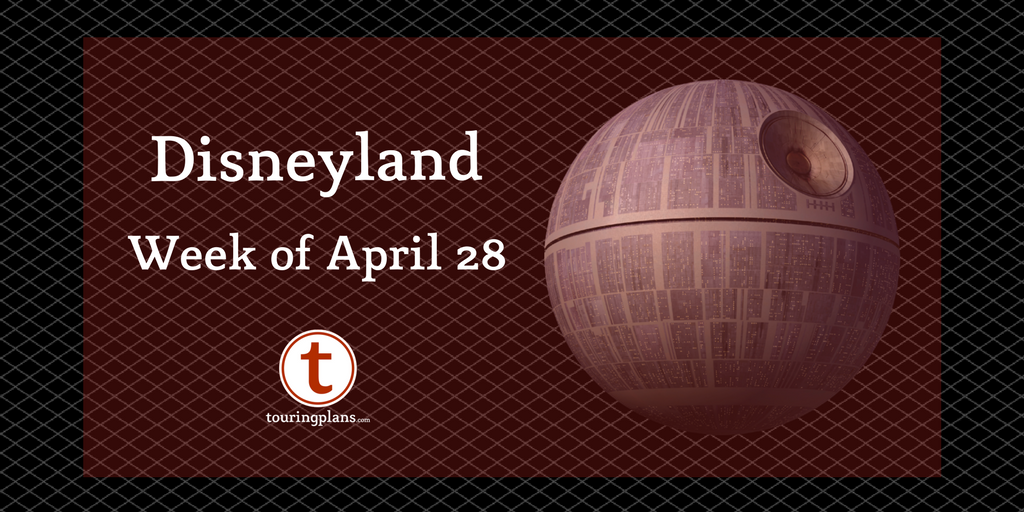 This week, we see a Star Wars-themed Disneyland After Dark, and special festivities for Star Wars Day, a/k/a May the Fourth. Read on to find out about this and more in this week’s Disneyland preview.

We still have a while before Star Wars: Galaxy’s Edge opens, but there’s still loads of Star Wars fun to be had towards the end of this week! Thursday night is the latest installment of Disneyland After Dark: Star Wars Nite, which will feature a meet and greet with Rey, the premiere of the March of the First Order, and the return of Hyperspace Mountain, the outstanding Star Wars overlay for Space Mountain, in addition to other Star Wars-themed merriment. You should be aware that tickets are already sold out, so if you don’t already have tickets, Disneyland Park will be closing at 9 pm on Thursday for you.

The Star Wars fun continues on May the Fourth, and the good news is that many of those special events and opportunities will be available to the masses on Friday; if you’re not able to make it on Thursday, you’ll have a chance to see Rey, watch Captain Phasma, and pick up special Star Wars merchandise the following day. Hyperspace Mountain will also be available to everyone staring May 4.

Friday is also Grad Nite at Disney’s California Adventure. That park will host a private party after regular park hours, but there will be more teenagers in the parks that day prior to the evening event as well.

It’s also still Pixar Fest! During this festival, which runs through September 3, you’ll find Pixar-themed fireworks and the Pixar Play Parade at Disneyland Park, and the return of Paint the Night at Disney California Adventure, in addition to other Pixar-focused activities and opportunities. There will also be special dining opportunities available, as one would expect, and the Alien Pizza Planet will be launching at Disneyland Park for the occasion. Make sure you check out Rikki’s preview of the Festival!

As if often the case for these events, there is a special area for Passholders. Stop by the AP Corner for Pixar decals (new ones rotating in every two weeks) and themed photo locations. The AP Corner can be found at Paradise Gardens at Disney California Adventure and runs through June 8.

The weekend will see some pretty substantial crowds, clocking in at level 9 and 8, but the week should have average to slightly above average crowd levels. 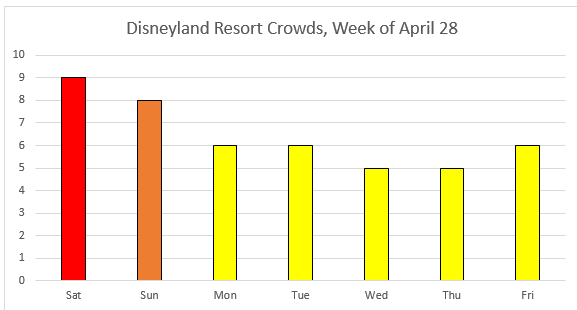 Should be a very nice week at Disneyland! Highs mostly in the 70s, lows in the mid- to upper 50s, and only a scant chance of rain in the middle of the week. 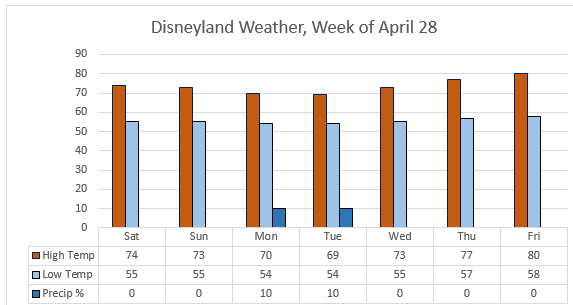 The refurbishment list is thankfully pretty short right now. At Disneyland Park, Pirates of the Caribbean is closed to transition to the new auction scene, and Space Mountain will be offline very briefly on May 3 to transition to Hyperspace Mountain that evening. Over at California Adventure, the Boardwalk Games at Paradise Pier and Mickey’s Fun Wheel are closed during the area’s conversion to Pixar Pier, and World of Color is dark during Pixar Fest, but the remainder of the park is all up and running. Check out our refurbishments page for details on exactly what will be down and for how long.