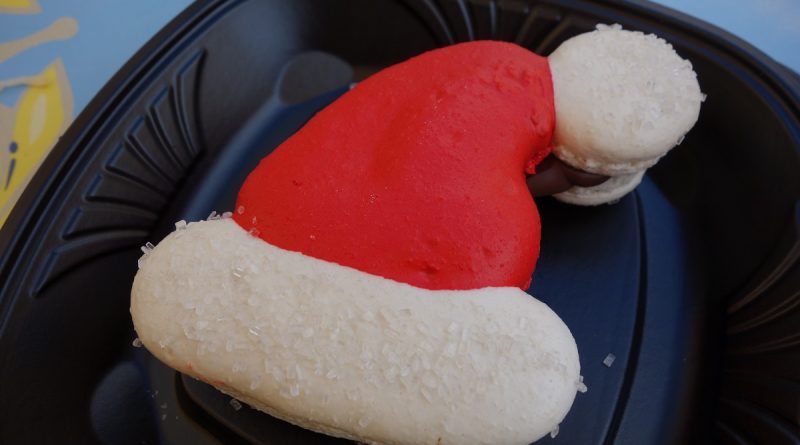 There’s so much good Christmas food at Disneyland and Disney California Adventure this year that you may have to skip going on any rides during your visit. You’ll need all the time that you can get in order to eat everything. In this post we’ll go over Disneyland’s best Christmas food, which Disney did an outstanding job with this year. Between the tasty gingerbread cookies is a scoop of brown sugar cinnamon ice cream rolled with crushed gingersnap cookies. This was incredibly festive and delicious. It ended up being my favorite Christmas food item that I tried in either park. Don’t miss out on this one. Back in October I was shocked at how good the special Halloween hot dog at Refreshment Corner ended up being. I couldn’t believe that Disneyland finally had a legitimately good hot dog. Good news. they did it again! The Philly Cheesesteak dog tasted like they dumped a Yoshinoya beef bowl over a hot dog, which is exactly as good as it sounds. Since this dish has returned for the last few holiday seasons at DCA I think at this point it’s safe to call it a classic. The rich hearty flavor with generous portions of turkey chunks never disappoints. The bread bowl itself is made on-site, which means you’re usually getting some wonderful fresh bread. This pie may be little, but it’s also dense and heavy. Points must also be given for how perfectly festive this things looks. Luckily the Chocolate Peppermint Pie tastes as good as it looks. The chocolate pie crust blended well with the creamy peppermint frosting and chocolate core. This would rate higher but it is a little pricey ($5.39) for how small it is. Disneyland has gone overboard with churros this year, both in terms of the variety they offer as well as the price they charge for them. Some churros with dipping sauce are as high as $6.50. Save your money and go for the Churro Sundae instead. It’s got peppermint ice cream and a cajeta-filled churro, and is topped with chocolate brownie crumbles, chocolate sauce, and whipped cream. It’s taken Disneyland 63 years, but they’ve finally figured out how to turn nachos in to a dessert. The dish includes chips that have been dusted in cinnamon and sugar, caramel sauce, apple pie filling, and topped with whipped cream. I recommend sharing the dessert nachos. Going at it alone made me feel like I was carrying a brick in my stomach for the rest of the day, but damn was it a good tasting brick. You have to see the Minnie Wreath Donut in person. It’s gigantic, so be sure to bring a couple of friends to share with. The donut itself is delightfully flaky, and the inside is filled with chocolate peppermint ganache. Overall this is a solid Christmastime treat. I have a huge and near unquenchable sweet tooth, but even I thought the Santa Cone Hat Macaron was almost too sweet. I’m not saying it wasn’t delicious, because it was, but wow is it rich. The center of the macaron features cookies and cream filling and crushed cookie bits. I can’t believe I’m ten items deep in this post I’m still posting items that are just as good as the selections mentioned before. Here’s another winner, the cherry vanilla bread pudding. Pacific Wharf Cafe always has a seasonal bread pudding that is high in quality and taste, and this year’s Christmas version does not disappoint. The cherry and vanilla blend well together, and neither overpowers the other.

Disneyland Resort isn’t exactly known for its pizza, but this particular pie combines a lot of different flavors in to something that is pretty darn good.  Toppings include roasted turkey, mashed potatoes, turkey gravy, bacon, vegetables, and cranberry sauce. Every bite had a different flavor, which I enjoyed. This is MUCH better than the Hamburger Pizza that Pizza Planet had during Pixar Fest. Inside of the Santa Hat Macaron you’ll find mint and chocolate ganache. To me it tastes like a Junior Mint. It goes without saying that this is a great looking Christmas food item. The Holiday Brownie wins my award for most photogenic Christmas food item this year. I especially like the look of the cookie Christmas tree. The brownie is topped with white chocolate mousse, sprinkles, chocolate presents, and a Christmas tree Gingerbread Cookie that I mentioned before. Unfortunately the taste doesn’t hold up to how good it looks. Don’t get me wrong, it’s a decent brownie. But it doesn’t compare to the other items on this list.

I know people enjoy the Funnel Cake Fries at Award Wieners. But I’ve tried the many different seasonal varieties and found them all to be bland and rubbery.  They also have a high price tag of $7.99. This was the one and only item that sat unfinished when the Brickers and I went around eating Disneyland Resort’s holiday foods for this year.

I hope you enjoyed this look at Disneyland’s best Christmas food items of 2018. Let me know what you think about the items I featured, or share some of your favorites that I didn’t mention. December at Disneyland can get quite busy. Be sure to check our Disneyland crowd calendar to find the best dates to visit the park.