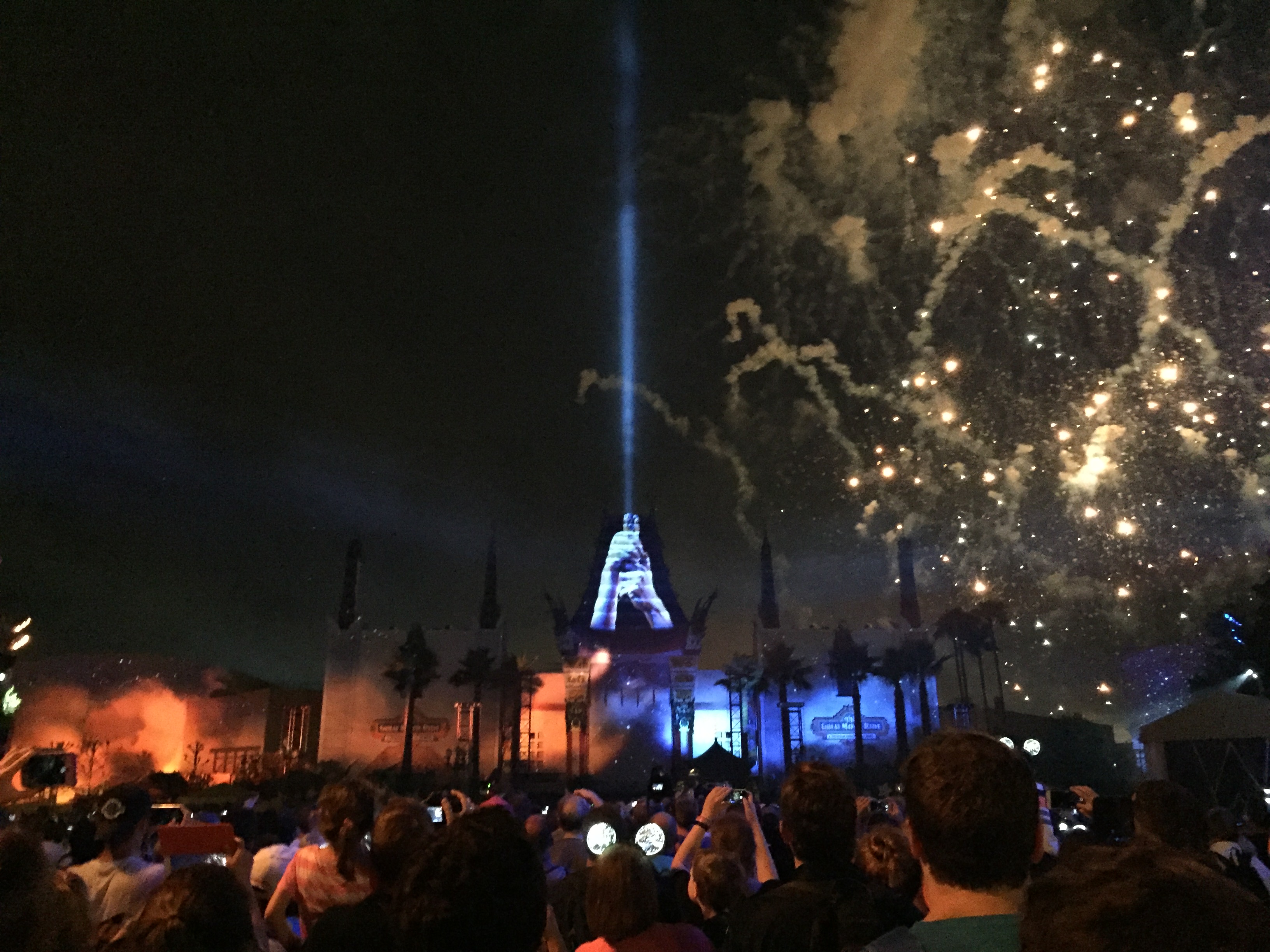 There has been an awakening, and if you’ve been anywhere in vicinity of Walt Disney World you have likely heard it even if you haven’t felt it. On Friday June 17, 2016 the new “Star Wars: A Galactic Spectacular” night time show debuted. I hesitate to simply call it a fireworks show, because it is so much more. In a park that already has a great night time spectacular: Fantasmic! it seems almost unnecessary to have a second night time show. However, this Star Wars spectacular is absolutely breathtaking for anyone who is a Star Wars fan. I’ll include a brief, spoiler-free review below and also give a more detailed review at the end for those who want all the details. Here I will provide a brief overview of “Star Wars: A Galactic Spectacular” without going into too much detail, in hopes of avoiding spoilers. If you’d like more details about the show and the effects and elements more details are provided further down this post.

This night time show is often simply dubbed the “Star Wars fireworks.” While the show does contain lots and lots of fireworks, there are many more elements to it. Think of it as a symphony. The fireworks are just one section, let’s think of them as the brass section. In a symphony there are many other sections like strings, woodwinds, and percussion. This show has multiple elements the way a symphony has multiple sections. It is best to secure a spot 30 – 45 minutes in advance. However, it should be noted that when I went on opening night our group arrived to Hollywood Blvd about an hour beforehand and there were about 300-400 people already in front of us. The main focus of the show are stunning projections. There are projections on the Chinese Theater, but also the two neighboring facades, making a for a wide view. There are multiple launch points for the fireworks, the main of which is off centered to the right.

Watching along Hollywood Blvd is of course the most popular choice for viewing locations. It is akin to watching Magic Kingdom’s fireworks from Main Street USA. I personally feel being right up front by the Chinese Theater might be too close. Being parallel to the Galactic Dessert party, which is to the left of the courtyard in front of the Chinese Theater is a good choice. Our group watched the show about 100 feet in front of the intersection of Hollywood Blvd and Sunset Blvd. This view allowed us to still clearly see the projections and fireworks, as well as other effects, however some of the trees impeded our view of some of the secondary fireworks.

Watching the show from the far left side of Echo Lake seems plausible. The main fireworks would be very visible here. As would most of the projections. However, other show elements would not be as visible and not have as much impact from this spot. Overall the show is breathtaking for Star Wars fans, an absolute must-see. For other guests who are not as into Star Wars the show may loose a bit of its “oomph” but it is still an impressive collection of various elements. Fantasmic! may be a better fit for such guests, but this show is still worthy of any guest’s time.

In this brief review I will discuss as many show elements as possible. If you do not want to know how the show starts, ends, and all the stuff in between then you may want to stop reading now.

Having the Chinese Theater as the backdrop of “Star Wars: A Galactic Spectacular” is fitting because the very first Star Wars movie premiered at the Mann’s Chinese Theater in 1977. I knew to expect projections on this building, but I was not prepared for the additional projections along the neighboring soundstages. There are multiple scenes that are panoramic, it felt like watching an IMAX movie at times. There are also smoke effects that I did not expect, which become impressive when smaller projections appeared on these streams of smoke in a few points during the show. Color plays an important role in the show, especially red. A few times throughout the show the audience is bathed in color as fireworks, lights, and lasers work in unison. There are spot lights and flood lights in multiple places throughout the viewing area, including lining the tree trunks of the trees in the courtyard! Lasers play an important role, making the battle scenes feel real. This effect reminded me a little of the Star Tours scene in “Remember: Dreams Come True” fireworks for Disneyland’s 50th anniversary. There are essentially three “acts” in the show. The first act describes the Star Wars film phenomenon itself. I enjoy that this show acknowledges the films and their place in Hollywood, rather than a show that attempts to make the characters real, such as how Disney characters are presented in Wishes or Fantasmic! Instead a brief history is presented, it fits perfectly with the theme of Disney’s Hollywood Studios, celebrating the magic of show business.

The second act puts the audience into the movies. The Star Wars galaxy envelopes the audience. Scenes and sound bites from every movie in the franchise thus far create a thorough tribute to Star Wars fandom. Different thematic montages showcase the various emotions and lessons that the entire collection of Star Wars films elicit. Admittedly the main body of the show may be difficult for anyone completely unfamiliar with Star Wars. However, I do feel that the effects and elements of the show are impressive enough to make it enjoyable for everyone. The final act brings it back to the movies themselves, as opposed to the stories. At first it took a moment to realize the significance of each scene, but I soon understood. Elements of every movie posters are projected, piece by piece until the entire poster is shown. This happens movie by movie, in order of release. As the music builds a pair of clasped hands appears on the entrance of the Chinese Theater and then a beam of white light juts out from the top of the building to create the image of a lightsaber. It is the most iconic part of the show, a moment that is used in advertisements for the show. The crowded cheered at this moment. Immediately after the sky is filled with a bombardment of fireworks, an overwhelming finale. I have a good feeling about this

In the days that followed my viewing of “Star Wars: A Galactic Spectacular” (aka the new Star Wars fireworks), I had a difficult time not thinking about the show. That night I had trouble sleeping and decided to watch “The Force Awakens” and kept thinking back on moments from the spectacular. I can see this show being updated with new music and footage as the Star Wars saga continues over the coming years. It is a definite must-see for Star Wars and a solid show for other guests as well. The Force is strong with this one.