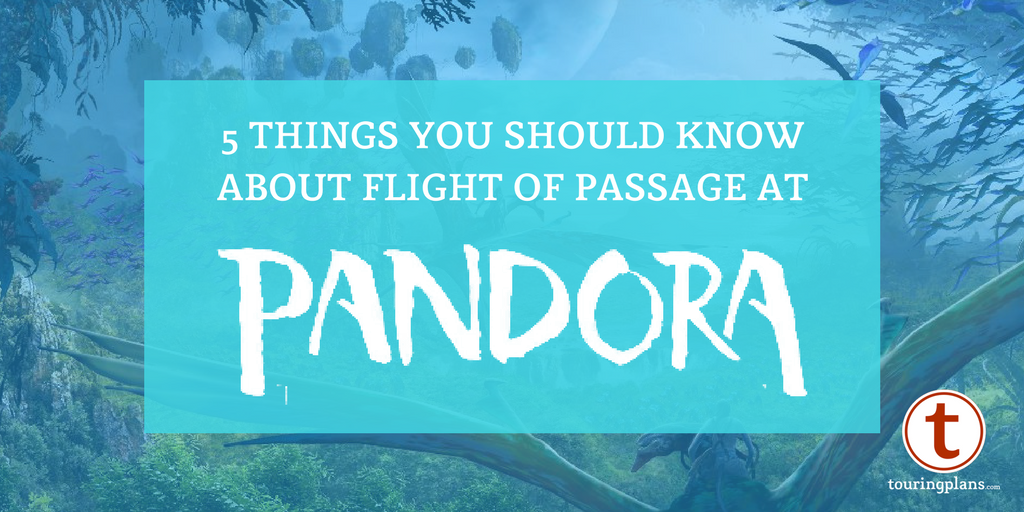 Animal Kingdom’s Pandora – The World of Avatar officially opened on May 27th; and apart from the floating mountains, Flight of Passage has generated most of chatter and acclaim. This new attraction grants guests the experience of flight aboard a banshee. Flight of Passage has been described as a combo of Soarin’ and Star Tours, which is a fair comparison. Sort of. Flight of Passage uses both 3D and simulation, but is so unique and advanced that it’s changing the theme park game. After a flight or two on a banshee at Pandora, I’ve compiled a list of Five Things You Need to Know About Flight of Passage for those of you about to take flight and rise to the challenge! 1. You Are Riding Solo

Unlike other attractions at Walt Disney World, each guest riding Flight of Passage has their own ride vehicle or link chair. Guests straddle the link chair as they would ride a bike and both leg and back restraints keep guests sitting securely. The link chairs are positioned in rows and situated close to another; however, Flight of Passage is very much an individual experience. I believe this is worth noting for guests apprehensive about certain attractions or who are claustrophobic and for kids. The height requirement is 44″, about the average height of 7 or 8 year old. Be sure your child is prepared for the restraints, which limit movement, and riding relatively separate from you and others.

Many attractions at Walt Disney World have pre-shows, themed videos in a holding room providing ride instructions and the safety spiel. Park regulars and fans quote pre-show scripts by heart. If “How about some backstage passes?” or “Nice work, pal,” mean anything to you, you get what I’m saying.

Anyway, Flight of Passage has not one, but two pre-shows with video. The first is where you and your ride group are matched to your avatars. The second explains the importance of banshees to Pandora and what’s about to happen. Why the need for two shows? I’m sure logistics play a role, but I also wonder if the concept of riding a banshee via an avatar was something Disney feared guests wouldn’t grasp and needed to explain in two segments? Regardless, be prepared for two pre-shows when waiting to ride Flight of Passage. (Ed- there are also multiple versions of the second pre-show that give more backstory to the attraction.)

Perhaps my only complaint with Flight of Passage is the 3D glasses. If you’ve been to Walt Disney World before, you’re familiar with Disney’s 3D glasses thanks to Toy Story Midway Mania, Muppet*Vision 3D, Mickey’s Philharmagic, and Star Tours. Flight of Passage’s glasses have a Na’vi vibe, which I like, but mine did not feels secure during my ride. Yes, Flight of Passage is a simulator with a screen, but you do learn forward and tilt quite a bit. That, and thanks to the wind effects, I was distracted from my ride feeling like my glasses were slipping or falling off my face.

4. Gives You the Feels

Flight of Passage is designed to feel as real as possible and it delivers, but it should be noted that you feel things physically and emotionally. Physically speaking, in addition to the feeling of flight, with dips and tilts, guests will also feel wind and water effects. The coolest might be the sensation of a guest’s banshee breathing under them!

The biggest surprise for me from Flight of Passage was how I felt emotionally at the end. Some guests claimed that the ride brought them to tears and I can see why. Flight of Passage is not a thrill ride, it’s joyful exhilaration. I leave Rock n’ Roller Coaster and Tower of Terror with my adrenaline pumping. I left Flight of Passage in pure joy and wonder. Yes, there was a moment or two that made me react in surprise or shut my eyes, but that’s not the goal of this new attraction.

5. There are Multiple Levels

When riding Soarin, it’s obvious that there are levels of ride vehicles. Unless you’re on the top row of hang gliders, you clearly see peoples shoes above you. Flight of Passage has multiple levels of link chambers facing the screen, but it’s not obvious. I was on the first level for my first ride and had no idea there were levels above me until my second ride, where I was directed up a flight of stairs to the pre-show. That’s when I intentionally looked around and down this time around, and only then saw other rows of link chairs. It shows the Imagineers efforts at making Flight of Passage as personal and immersive as possible.