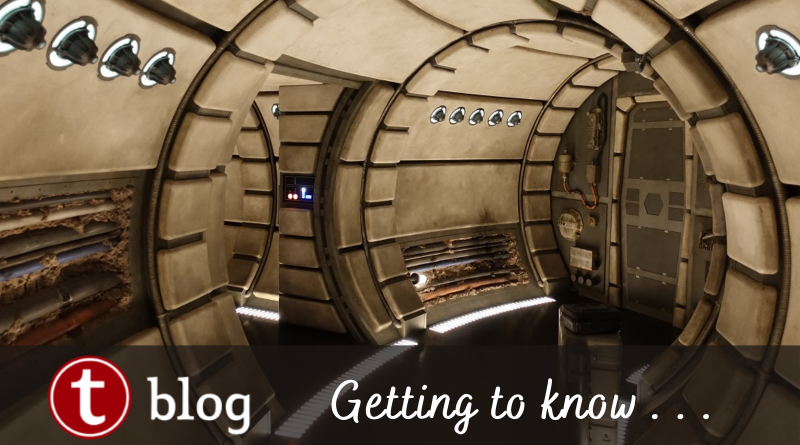 If you’re a Star Wars fan, then Walt Disney World truly is the place where dreams come true. I’m referring to Millennium Falcon: Smugglers Run at Star Wars: Galaxy’s Edge at Disney’s Hollywood Studios. While this attraction isn’t on the same level as Star Wars: Rise of the Resistance (which to be fair – what is?), it offers guests the experience of piloting the fastest hunk of junk in the galaxy.

The attraction itself is an interactive simulator where guests are assigned unique roles and tasks to perform throughout the ride. Think of it as an upgraded version of EPCOT’s Mission: Space set in the Star Wars Universe and minus the claustrophobia and motion sickness courtesy of detached screens.

1. The Situation with the Cockpit

The cockpit is designed to replicate the cockpit of the Millennium Falcon down to the most minute details. You will truly feel like you’re stepping into a Star Wars movie when those whooshing doors slide open and you see inside.

However, this Millennium Falcon has three rows of seats with six seats in total; and every row has a different job to perform. 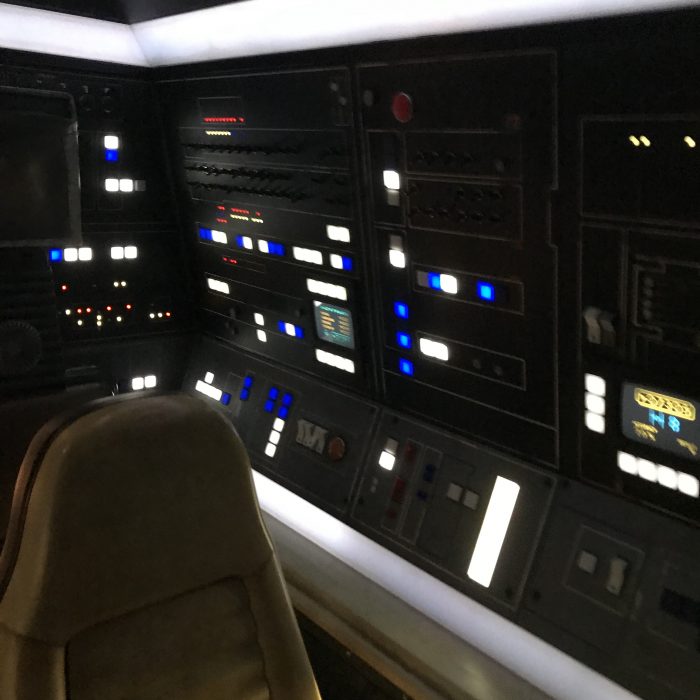 The two pilots are seated at the front and at the controls. The gunners sit behind them followed by the engineers. These latter two positions have buttons to push and functions to perform on the wall panel beside them.

So here’s the thing. The pilot positions are simply the best. They’re closest to the screen and have the most to do. What’s a little unusual is the shared piloting. For instance, the left pilot controls the ship moving left and right while the right pilot controls up and down. 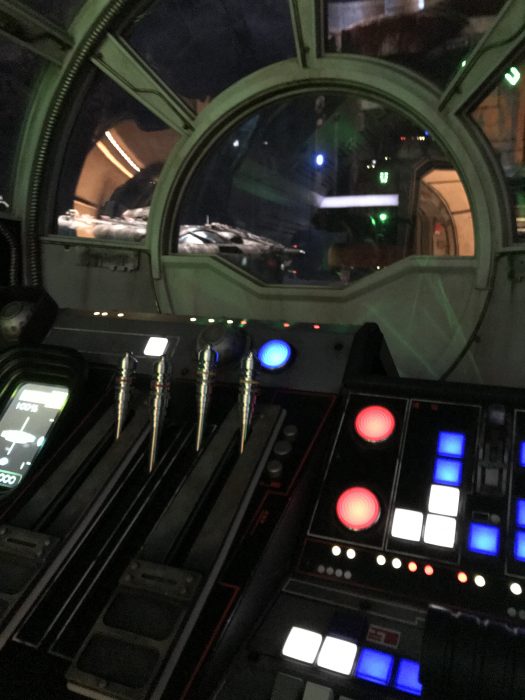 Tip: The right pilot is way better than the left simply because they get to pull the lever for lightspeed! (By the way, if you don’t yell punch it; you’re doing it wrong. Just sayin’.)

When the ride first opened with Galaxy’s Edge in late August of 2019, some guests found that the pilot positions came with a lot of pressure since the actions of the pilots impact the ride the most. This was especially awkward when the pilots didn’t know the other guests riding with them.

Well, due to our current global situation, that’s no longer a concern. In order to allow for social distancing, each party now receives their own cockpit when riding Millennium Falcon: Smugglers Run. Now there’s no concern about riding with strangers or feeling their ride experience is entirely in your hands! It also increases your odds of receiving the pilot position since it’s now up to you and your group what your role is as opposed to being assigned it by a Cast Member.

2. Your Performance (Sort Of) Makes a Difference

Back in the day when we were first hearing about Millennium Falcon: Smugglers Run and the rest of Galaxy’s Edge, eager guests were told their actions and performance would influence their other interactions in the land. For instance, a Cast Member at Oga’s Cantina would know if you crashed the Falcon or did a great job and say something to you about it.

That never quite happened. While the pilots do impact the overall ride, it’s more along the lines of damage. The ride film doesn’t allow for much deviation; and in some cases, guests who have intentionally tried to do a terrible job have received a similar, if not better, score than when they actually tried! And if you attempt to crash the Falcon, you still go through the motions of the ride film and reach the same endpoint.

So even though there’s an element of control on Millennium Falcon: Smugglers Run, it still too much like Mission: SPACE. Great for kids; not so much for teens and adults.

3. The Queue May Be Better Than the Ride

It’s true. Apart from sitting in the cockpit of the Falcon and going to lightspeed, the queue for Millennium Falcon: Smugglers Run may wow fans more than the ride experience itself.

The first half of the queue is through a detailed space garage for Ohnaka’s Transport Solutions offering incredible views of the life-size Millennium Falcon parked just outside. But it gets really awesome when guests encounter audio-animatronic Hondo Ohnaka, a jolly but shady pirate from the Star Wars Universe, who needs you to join the Falcon’s crew for a job.

The next phase of the queue allows guests to enter the hold of the Millennium Falcon which, again, looks exactly as it does in the film complete with the iconic holographic chess table, porg nests, the hallway where Han and Leia first kissed, familiar trinkets from the films, and more.

“Chewbacca Mode” is a special modification or cheat code you can activate while aboard Millennium Falcon: Smugglers Run. This mode basically replaces Hondo Ohnaka’s narration with Chewie for the length of the ride experience.

According to the FreshBaked! YouTube channel, there’s a process to activate this mode. First of all, you should not choose manual or automatic flight mode right away. Instead, have the left and right pilots push their controls to the extreme left, right, up, or down. With the controls pushed, the pilots should then press the flight mode activation button followed by the engineers and gunners pressing any of the white buttons before pressing the orange flight mode button.

All of these steps need to be completed before the Cast Member finishes checking seatbelts and starts the attraction.

5. The Characters and Locations Are Not Mainstream Star Wars 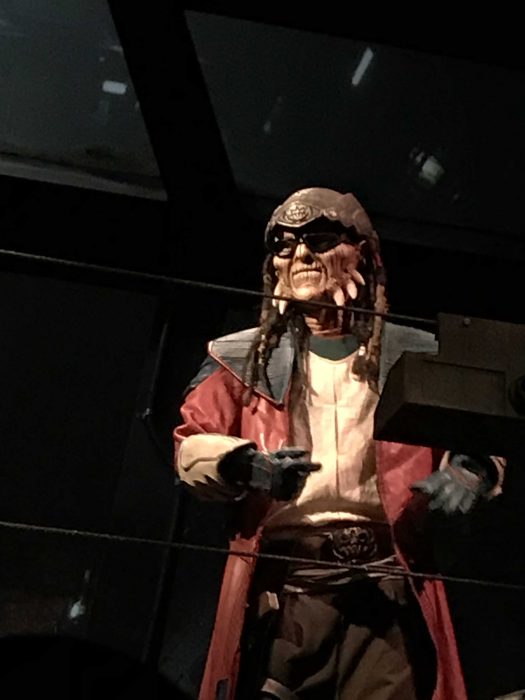 Casual Star Wars fans may be confused by the ride’s story. Who is Hondo Ohnaka? Why is Chewbacca working with him? And after leaving Batuu, where did you go and why?

So Hondo Ohnaka is a legit Star Wars character from Star Wars: The Clone Wars and Star Wars Rebels animated series. Imagine a blend between an enthusiastic salesman and a Captain Jack Sparrow – that’s Hondo. He’s been known to help out the Rebels and now the Resistance, as long as he profits in the end. That’s why Chewbacca is letting him use the Falcon and that’s why Hondo needs you.

Now after you leave Batuu on Millennium Falcon: Smugglers Run, you go to Corellia. That’s Han Solo’s home planet featured in Solo: A Star Wars Story. Your mission is to obtain containers of coaxium, a material needed for hyperspace travel, from a First Order train on Corellia.

Hopefully, this will prevent any confusion for when you ride Millennium Falcon: Smugglers Run.

Is Millennium Falcon: Smugglers Run on your to-do list? Let us know in the comments!