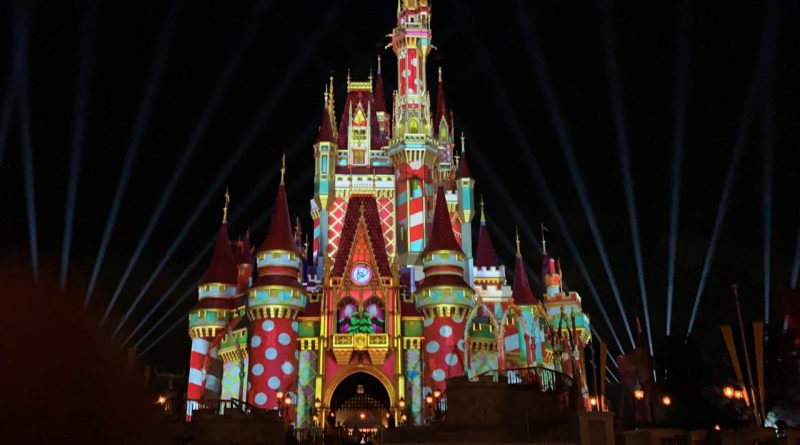 It’s 90 degrees outside today so you know what we are talking about? Christmas. The merry season will begin November 12 at Walt Disney World Resort

Today, Walt Disney World shared a look at the entertainment, décor, seasonal food and drinks, and more that will be a part of this very special season at the four theme parks, Disney Resort hotels and Disney Springs.

When people think about the holiday season at Walt Disney World, they typically think about the Magic Kingdom. This year, the holiday projections that were introduced last year will once again return on Cinderella Castle. This year, they will alternate periodically with the castle’s transformation into a Beacon of Magic. (The Beacon of Magic is being done to celebrate the Walt Disney World Resort’s 50th anniversary.)

Unfortunately, I do have somewhat sad news to bring. Mickey’s Very Merry Christmas Party will not be happening for 2021. Instead, there will be the new special-ticketed event Disney Very Merriest After Hours. This event will debut on November 8 and will happen on select nights through December 21.

The four hours of festivities will include “Minnie’s Wonderful Christmastime Fireworks,” Disney characters throughout the park, holiday music and décor, treats included and so much more! Because this is a Disney After Hours event, a limited number of tickets will be sold. The event will be offered after regular park operating hours, with lower wait times and access to more than 20 select attractions. Tickets will go on sale next month, with an early purchase option available to guests of select Walt Disney World Resort hotels.

At EPCOT, enjoy traditions from around the world, courtesy of inspiring music, tasty treats and family-friendly experiences with The EPCOT International Festival of the Holidays. This year, the event will return from November 26 – December 30. There will be Holiday Kitchens around the park, performances by Voices of Liberty, the Cookie Stroll and more! (Unfortunately, no Candlelight Processional this year, it would appear.)

Now this is my favorite park for the holiday season. Once again, for 2021, the Sunset Seasons Greetings show returns on the Hollywood Tower Hotel on Sunset Boulevard. The building will will transform thanks to projection effects. There are four different “shows” that take place – one themed around Frozen, one themed around the Muppets, one around Toy Story, and one is inspired by “Mickey’s Christmas Carol.” This holiday show will also alternate with the tower’s nightly transformation into a Beacon of Magic.

Other festive experiences will include Santa Claus and his holiday motorcade down Hollywood Boulevard. The “For the First Time in Forever: A Frozen Sing-Along Celebration” will once again include a festive finale featuring Olaf. Minnie Mouse is also returning to host Minnie’s Holiday Dine at Hollywood & Vine where favorite Disney characters will wear their holiday best. Guests will also find kitschy, vintage-themed holiday décor across the park.

Seasonal décor and festive character flotillas sailing down Discovery River will return for the season. In addition, during the holiday season, Guests will be able to enjoy the holiday edition of Tree of Life Awakenings on most nights, in between Beacon of Magic transformations.

This year sees the return of the Disney Springs Christmas Tree Stroll. Guests will be able to find elaborately decorated, Disney-themed trees. There will be some new and some inspired by “The World’s Most Magical Celebration.”

Guests will also be able to experience “snowfall” in Town Center.

The Walt Disney World Resort hotels will be decked for the holidays, with iconic trees and other seasonal touches. And we may see the return of the gingerbread house at the Grand Floridian, as Disney hinted that a guest favorite will return this year. Actually, select gingerbread displays will once again be part of the holiday season! Select resort restaurants will also offer holiday menus and specialty food and drink.

So, who is ready for the holiday season to bring bring cheer once again to the Walt Disney World Resort?