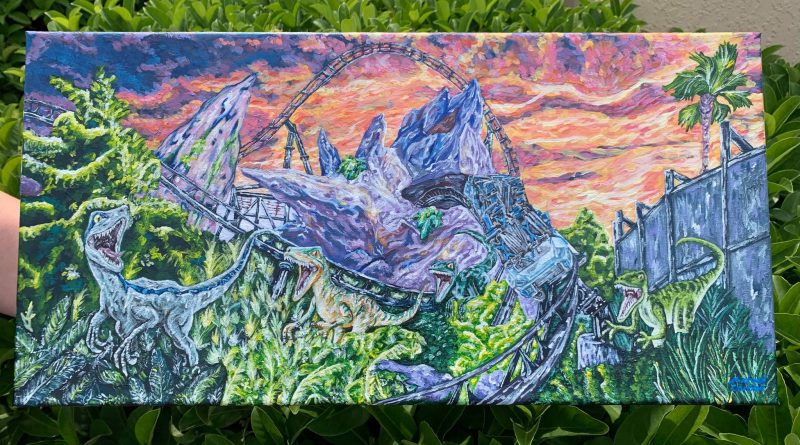 This week’s SATURDAY SIX takes a look at how Universal’s VELOCICOASTER has inspired artists in the theme park community! This past week Universal announced that the VelociCoaster, their latest attraction at Islands of Adventure, would officially open on June 10th. Despite Disney being years into the process of building a couple roller coasters across town (neither of which are anywhere close to opening soon), the VelociCoaster has struck a chord with the theme park community in ways that the Mouse’s TRON and Guardians of the Galaxy coasters have not. Today we’re going to look at some of the amazing things which the VelociCoaster has inspired, starting with…

Readers of this fine blog series know how much we love LEGO. Our Plastic in the Parks series features LEGO at Walt Disney World, the Universal Orlando Resort, and even recreating a 2020 Theme Park Turkey of the Year winner at Disney Springs. Going by past history, we probably won’t be seeing any officially licensed LEGO sets for the VelociCoaster, but that’s okay because fans have created them! First up we have a LEGO set based on the sharp looking VelociCoaster ride vehicles. Seeing this brought me back to when I visited LEGOLAND Florida with my family. Many rides at LEGOLAND offer the ability to see your on-ride photo. At the kiosks where the pictures are displayed, LEGOLAND had LEGO versions of each attraction’s ride vehicles in a display case. You couldn’t actually buy these LEGO vehicles, just look at them. Luckily for me there is a segment of the theme park community which figures out which LEGO pieces you’ll need to build your own versions of attraction ride vehicles at home.

With the directions in hand, you can have an amazing VelociCoaster ride vehicle sitting on your desk while you plan your next vacation to Jurassic Park.

The LEGO set below is based on the raptor pen gate located near the 2nd launch of the coaster. It is made out of 1,324 LEGO pieces!

Back in late Februrary, Universal unveiled in-park signage for the VelociCoaster and it was awesome. It wasn’t just that the logo looked cool, it’s because it had the same design aesthetic which was used for the rides in the film Jurassic World.

When the VelociCoaster officially opens in June, we’ll certainly see keychains in the gift shop. However, I am not as sure that any of those keychains will be based on the attraction’s cool looking sign. Graphic designer Jean Carlo Cancel made one of his own, and it looks fantastic!

Another user on social media took the VelociCoaster ride signage and added a touch of whimsy to it by creating the VelociToaster sign for his kitchen!

The details are PERFECT.

I love that the Toaster oven itself in the logo has speed lines as if it is racing along with the raptor pack below. Slow clap. Standing ovation. Pick your superlative here because I am blown away.

After the VelociToaster, Gregory Lewis went to work on recreating the incredible raptor statue in the very first showroom of the VelociCoaster and the results are STUNNING. 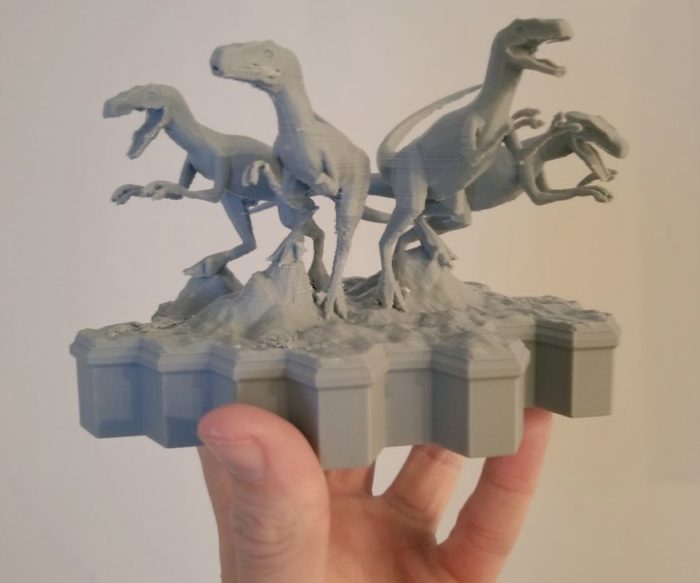 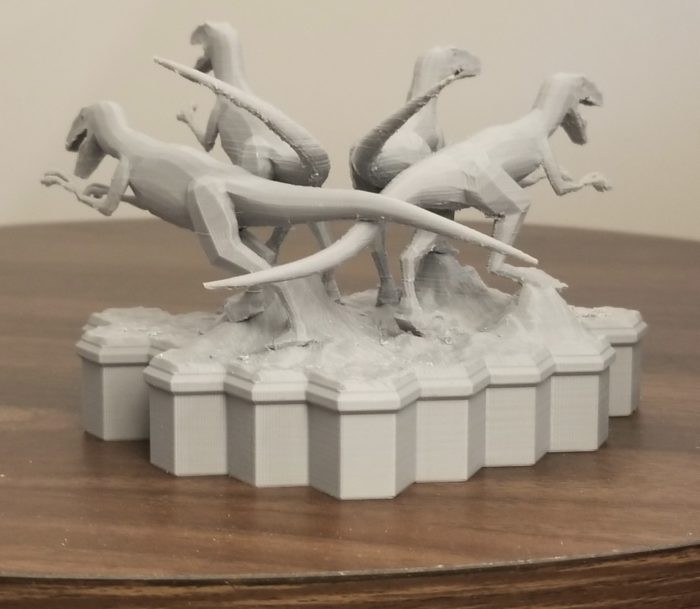 The SATURDAY SIX spent the entire month of February spotlighting artists in the theme park community who draw, so it is fair to say we have a soft spot in our hearts for those who still put “pen to paper” (or, in today’s world “digital pen to tablet”). While we have seen theme park photographer Michael Carelli‘s photos many times in these pages, as a Jurassic Park super-fan he was inspired to draw and paint this stunning picture of the VelociCoaster and included the entire raptor pack as well!

Social media user @blockbrakes spent 38 hours from sketch to final signature on this gorgeous drawing of the VelociCoaster’s twisting track. Do I also spot in the background my favorite Volcano…

Our next drawing is watercolor pencil that took 18 hours total to finish. It is titled “Red Alert” to go along with how the lights on the 2nd launch turn red when the VelociCoaster train goes by. The artwork is part of Mikhile Williams‘ ongoing Coaster Silhouettes series, which also includes pieces for Busch Gardens Williamsburg along with Thorpe Park and The Smiler from Mikhale’s home in the UK.

One of the SAT 6’s favorite artists – @sonderquest – drew a VelociCoaster train along with the attraction’s rock work and a velociraptor.

For those of us of a certain age, the experience of playing video games as a kid is a lot different from the video games kids play today. BACK IN MY DAY, when we bought a video game at the store we went home and played. Today, you get home, put the game in and… wait for it to install the updates. We didn’t have “buffering” issues on our games. If we had any problems, we just took the game cartridge out, blew on it, and put it back in.

In all seriousness, today’s gamers have a lot to be thankful for, but for me one of the wildest things available is the ability for people in a community to play games created by other users in the community. Roblox is one of these online gaming platforms, and of course theme parks are represented. When I was a kid, I would have done anything for a game that allowed me to basically walk through and experience my favorite theme parks. Roblox recently updated their Universal area by faithfully recreating the VelociCoaster coaster.

Watch the video below and be prepared to be amazed.

As theme park fans we love photos of the parks, and no ride is more beautiful to take pics of than the VelociCoaster. 4,700 feet of twisted steel and sex appeal, this is a thrill ride that provides one amazing photo opportunity after another.

Sunset brings on a new element to VelociCoaster photography as the various lighting features of the attraction toally pop!

HONORABLE MENTION – Advertising on the infamous “I-4 Eyesore”

One of the more fun things on social media this year was seeing a video posted by user @G-Prodigy (who is part of the VelociCoaster team at Universal). The video is shot from a car driving along I-4 looking at the Majesty Building. For those of you not in Orlando, the Majesty Building is a gigantic structure that started construction in 2001. Two decades later, the odd-looking building remains unfinished. It is known locally as the “I-4 Eyesore.”

Now, the video itself has an ad for the VelociCoaster appear on the Majesty Building.  This was an obvious joke, but some of the less-reputable theme park sites ran with it as an actual story.

The saga of the VelociCoaster and an Osprey who decided to make their nest on its track is one for the ages, but  ultimately what it gave us is possibly the greatest theme park related t-shirt I’ve ever seen. Available at @GoAwayGreen‘s teepublic store. Want one? CLICK HERE!

THANK YOU TO THE ENTIRE VELOCICOASTER TEAM!

So there you have it: The SATURDAY SIX Looks at how Universal’s VELOCICOASTER has inspired artists in the theme park community! See you next weekend for the latest installment of the SATURDAY SIX, where we’ll look at something fun from the world of Disney and Universal. If you enjoyed yourself, be sure to check out The Magic, The Memories, and Merch! articles covering the latest from the Disney Outlet Stores. You can also follow Your Humble Author on Twitter (@derekburgan).