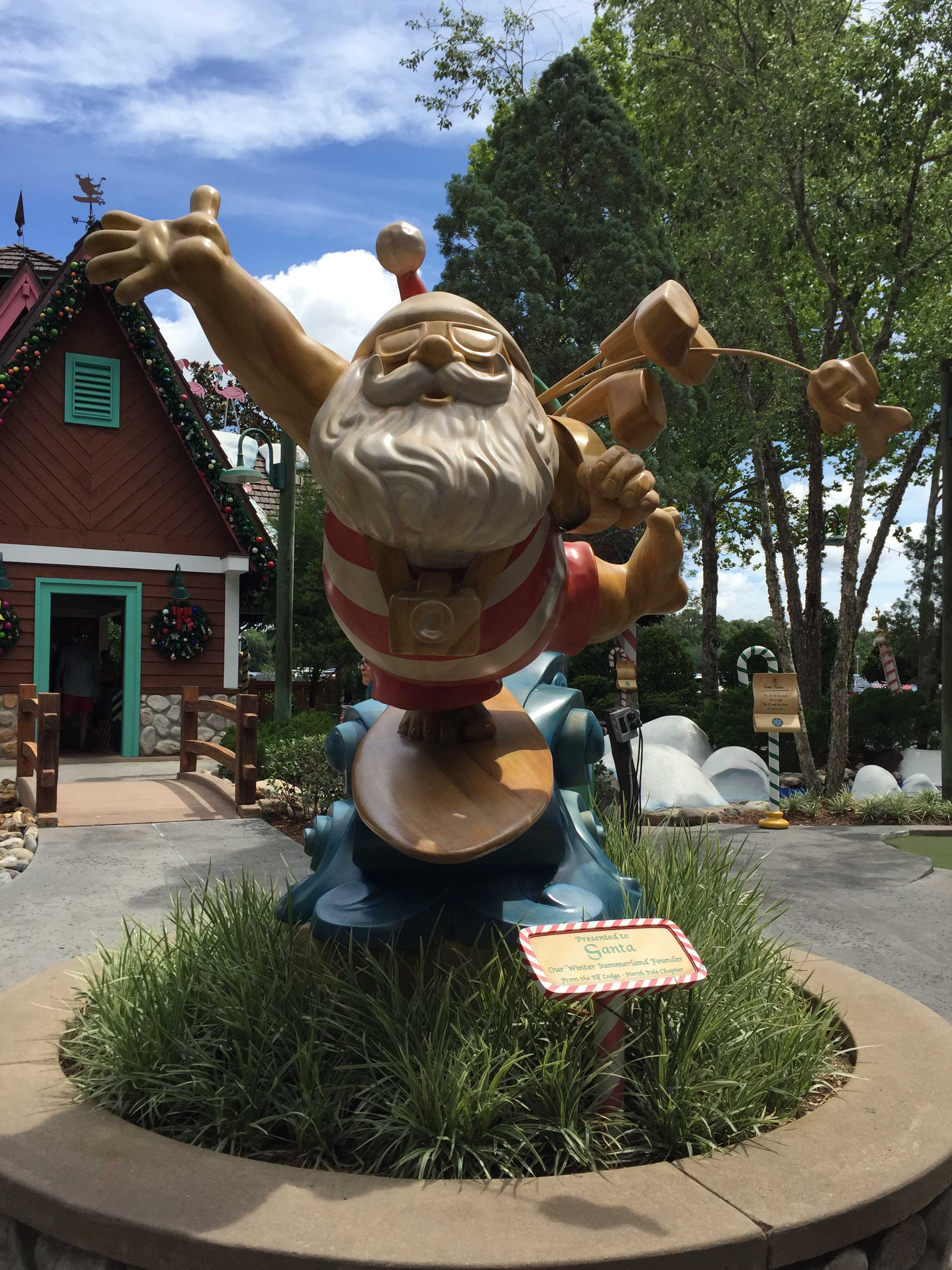 Our little girl is growing up so fast. Unfortunately, the week before her seventh birthday, she ended up breaking her glasses and catching a cold, so we pushed her actual birthday celebrating back a couple weeks. She had a couple unusual requests: another round of mini-golf at Winter Summerland (but this time on the Summer course), and a meal at Rainforest Café (a restaurant where we’ve never dined). Ah, the wants of a seven-year-old, eh?

Winter Summerland, the mini golf course next to Blizzard Beach, had a decent crowd when we arrived shortly after opening. Still, it was less than a 20 minute wait before our “tee time” came up. Many of the holes have themes that are similar to its winter counterpart, but looking at the fun themes, poems, and décor for each hole still makes for an amusing time out. You have to be quick to get across the bridge with the spitting fish, because they really put out quite a bit more water spray than any of us expected. To give some idea of the similarities, the Winter course has a snow castle, and the Summer course has a sandcastle, but isn’t it iconic to have the castle with the drawbridge on a min golf course? And yes, there are still some Disney touches on this course as well. We all felt a little weird about hole 11, where Santa Claus is buried in the sand. The good news is that he’s snoring, so you can tell he’s okay….right? Which I suppose makes it all the more troubling that the elves at the next hole are similarly buried in the sand, but are not snoring. But still not as mentally distressing as the next hole. Sing along, everyone… “Winter’s a good time to stay home and cuddle, but put me in summer and I’ll be a…..happy snowman?” I think by this point the heat was getting to us. A word of advice: If you’re planning to do mini-golf at Winter Summerland in the summer, go early or go late, because it gets really warm on the course. Thankfully, the final few holes are “inside” a house all decked for the holidays. Last time, I had to razz my husband about not getting a hole in one on the “gimme” 18th hole, where all you have to do is hit the ball up a ramp and into the collection area. Well, this time it took me two strokes to get the ball in there and get my personal greeting from Santa. And before we left, we had to let the birthday girl do the obligatory picture in Santa’s sleigh. It was time to move along to the second part of the birthday fun: Rainforest Café. The line to get in was pretty long, but thankfully we had a reservation and were seated quickly. Truth told, it was not as noisy as I had expected, but there was so much to look at all around, it was somewhat overwhelming. Throughout the restaurants are a bunch of very simple audio-animatronics that move and make noises at different times during the meal. Overall, while it isn’t anything so amazing that you have to see again and again, it was actually an enjoyable meal. From where we sat, we could see the gorillas. And in another direction, we could see the elephants. But by far, the favorite animal-type sight was watching the fish in the aquariums throughout the restaurant. The only sight that I think was a bigger hit was the chocolate volcano dessert–well worth the price and more than enough for the three of us. Once we had finished our meal, we decided to head home and enjoy the rest of the weekend relaxing at home. On our way out, we had to stop for this amazing photo art. I’m a big fan of the three-dimensional-looking sidewalk art installations, and this one was too cool to skip. Of course our daughter wanted to be a brave and stoic Na’vi warrior for this one! We’ve got big plans for the summer, but this was a great way to kick things off with our not-quite-as-little girl. We’re keeping with the Phineas and Ferb mindset, looking to squeeze every bit of fun out of summer vacation and making sure each day is better than the last. Hope you all are doing the same, and we’ll catch you next week on Best Week Ever!