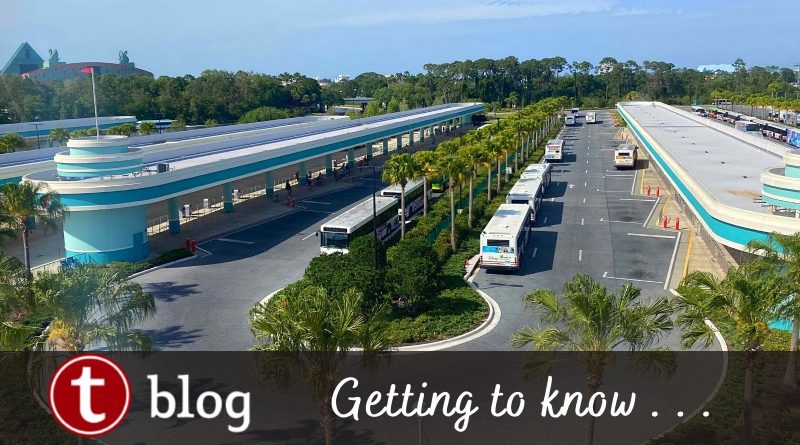 One of the benefits of staying on Walt Disney World property is the transportation. While there are some fun options like monorails, boats, and the Disney Skyliner, the bulk of transportation is by bus. There are some pros and cons to Disney’s bus system. The theme park and Disney Springs bus terminals are somewhat centrally located, but at the end of a fun, but tiring Disney day having to remember to look for your resort’s bus stop can be a challenge.

Each theme park, as well as Disney Springs, has one bus terminal for Disney owned and operated hotels, and another for off-property and non-Disney owned hotels.

To help you plan ahead, let’s look at the current Disney bus terminal set up. We’ll look at the current listing of bus lanes for the Disney resorts so you can get an idea of where your resort’s bus will pick you up at the end of the day. Just keep in mind, Disney can shuffle around the bus lanes so this current line up can change. It is also important to note that not all Disney resort hotels have reopened; this directory will change as more resorts reopen.

You’ll also see the other theme parks listed on each bus directory. Park to park transportation does not start until Park Hopping hours kick in, which currently is 2:00 p.m.

The Transportation and Ticket Center is home to the bus terminal for off-property and non-Disney owned hotels. However, it is sometimes used for Disney buses as well, such as when Disney runs a bus from the TTC to the Magic Kingdom front entrance.

At Magic Kingdom itself there is a bus terminal just a few steps from the park entrance and exit. This is a big benefit for staying at one of the Disney-owned hotels. It can save a decent amount of time, and energy, not having to deal with the TTC. The bus terminal is broken out into two wings with about half of the resorts on one side, and the other half on the other side. So be sure to pay close attention to the bus directory sign so you know your resort’s number and know which wing to head to.

At Magic Kingdom, the bus directory is in alphabetical order by resort name. Listings are subject to change, but the photos below should help give you an idea of the layout and set up.

In my book, EPCOT has the least convenient bus terminal. It is quite a walk from the park exit. It is to the left after you exit the park. It is also structured as a square rather than a U-shape or with lanes and spokes. So there is a lot of walking involved with EPCOT’s buses. The off-property buses and the Disney owned resort buses are next to each other.

The bus directory also seems to change a lot. And, the bus directory is listed in numerical order instead of by resort or park name. This does not make a whole lot of sense. If you’re tired and heading out for the day, which would be easier – searching by name, or by bus lane number?

The bus terminal at Disney’s Hollywood Studios also involves a bit of walking. It is straight ahead as you exit the park, just past the Skyliner station. The bus lanes themselves are shorter so there are four brackets of bus lanes. Pay real close attention to the bus directory so you know which bracket to which to head.

Hollywood Studios has the newest bus terminal as it was shifted from one side of the parking lot to the other when the entire front entrance was reconfigured as the Disney Skyliner came into development.

Over at Disney Springs the bus terminal for Disney-owned hotels is nearly in the exact center. It is near Town Center, close to Lime Garage. This is convenient in one sense that you are picked-up and dropped-off at the center of Disney Springs. But, it also means that no matter where you head, unless you stay in Town Center, you’ll have a bit of a walk to get back to the bus terminal. Off-property buses are relegated all the way at the end at Disney Spring West Side. It’s quite a walk.

It’s strange that EPCOT and Animal Kingdom are numerical, but Magic Kingdom, Hollywood Studios, and Disney Springs bus directories are listed alphabetically. A little consistency would make for a smoother ride.

Have you used Disney’s bus system? What tips would you add regarding the bus directories and terminals?