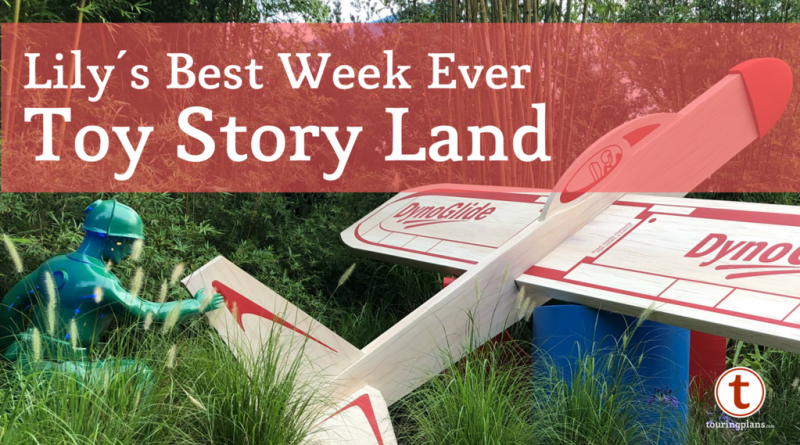 Hi, it’s Lily again. This trip is about Toy Story Land at Disney’s Hollywood Studios. Toy Story Land just opened a couple weeks ago, and I was excited to see it. When you come into Hollywood Studios, you see the Crossroads of the World. This is what I call the symbol of Hollywood Studios because the old symbol (the Mickey Hat) was torn down. People normally use the Tower of Terror for a symbol for the Studios, but I think a symbol should be right there when you come into the park. The Tower of Terror is around the back of the park. Plus, Mickey Mouse is on top. The other symbol of the Hollywood Studios is the Chinese Theater that used to be the home of the Great Movie Ride. Soon, it will be Mickey & Minnie’s Runaway Railway. I’m excited to ride it, because I like watching the Mickey Mouse cartoons. Now we are entering Toy Story Land. As you can see, there is a sign made of blocks and a yo-yo. This sign is HUGE. People were taking pictures with the sign, but it is so tall you can take a picture of the sign with no people. The first ride you see is Slinky Dog Dash. Slinky Dog Dash is a roller coaster with a double launch, meaning first you load and launch, and then it stops, pulls back, and zooms again. This is the spot where it does the second launch. As you can see, it’s very fast and it looks scary to me. I would not want to ride it. Instead, we went on Alien Swirling Saucers. I was a little bit nervous at first, because it looked fast and very swaying. But I was brave and got in line. There’s nothing to do in line, even though it has a lot of buttons and switches, but they don’t do anything. That is one of the Green Army Men on the roof, but he’s just standing there. He doesn’t do anything either. I spent time in line by playing the Play Disney Parks app on my phone. Play Disney Parks is an app where you can play different games. Some games you can do anywhere, even if you’re not in the parks. There are some, though, that require you to be in line or in the park that the ride is in. Also, the expedition games in Animal Kingdom are easier when you’re in Animal Kingdom. (I found that out playing at home.) The games sometimes have you do crazy things like hold the phone on your forehead and have another person playing with you imitating animals shown on the phone. The person with the phone on their forehead would have to guess what animal they were acting out. Some other types of games were like pinball, taking photos of people and doing stuff with those photos, and puzzle games. I finally got on the ride, and enjoyed it. This is a picture of me riding it with my dad. Mom was taking the photo from another ride vehicle. At the end of the ride, I was doing great. I would definitely ride again. When you get in side the building, there are board games like Monopoly and Candy Land on the ceiling. Which game do you like the best? My mom wanted to take a picture of me being wild. Look everybody! It’s a Wild Pokemon! Because I rode with dad on the other ride, I rode with mom on this ride. I was player 1. I got less points but better accuracy. On the way out, we saw different toys. We saw a box for this, and then we went around the corner and saw a Green Army Man building the toy. There’s a lot to see in Toy Story Land even though there’s not much to do. I have a toy glider plane made of styrofoam at home that is kind of like this. When you go to Toy Story Land, look around to see if there’s any familiar toys.

Next week, I’ll be back with the grand finale of my summer. You won’t want to miss it!