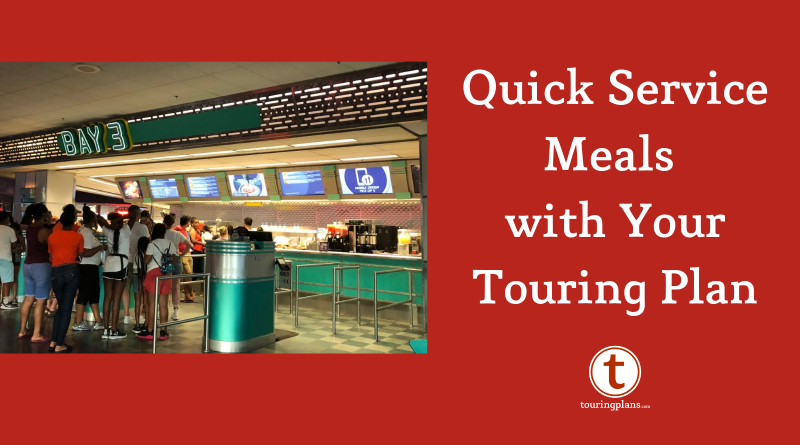 Quick service dining tips are some of the most requested recommendations for guests visiting Walt Disney World.

In the next few weeks, I will be re-creating some of our most popular touring plans and the testing quick service dining options that fit into those plans. I will make suggestions that are close to the stop before your plan’s break or the stop immediately after. Additionally, I will time my experience and let you know the results. Finally, because I have a six-year-old child who has mastered the art of altering any menu item (and I have to believe some of you have given birth to her fussy peers), I will order standard items with changes and time that too. Recommendations will be my opinions and will not be official changes to the touring plans.

One caveat before we begin: my daughter tested these plans with me, and I found that she was not able to get through steps 1-9 on the Unofficial Guide One-Day Touring Plan for Parents with Small Children without a snack, and this was after she had first breakfast at home and second breakfast in the car. (I will do more testing on touring plans snack stops soon.)

I timed our lunches the same way – walking from our last attraction on the plan prior to break and starting the timer at the entrance of each spot. I stopped the clock when we had our food, condiments, and utensils, and found a table. I did not time how long it took for us to eat since I take pictures of the food and surroundings and often stop to make notes in my notebook (and you probably won’t do as much of that) and eating speed is a huge variable.

If you’re interested, photos of most of the key child-friendly quick service foods can be found in our Disney World Quick Service Kids Meals FAQ.

Pinocchio Village Haus Standard Menu Selections – While the flatbread pizza ($11.99) at Pinocchio Village Haus is large enough for two children to share, if you order this, you’re probably going to just end up with two unhappy kids. This is the only pizza I’ve ever seen my daughter try and refuse to keep eating, and we’ve had pizza at every major chain arcade on the East coast and in Texas.

On the bright side, the chicken parmesan pasta ($13.49) is enough to share and comes with a side salad. The chicken was good and the breading was well seasoned. The pasta was … is there such a thing as bad pasta? Not in my experience.

I’ve tried salads at almost every quick service dining location in all of the Disney theme parks and the antipasto salad ($9.99) at Pinocchio’s is my least favorite by a mile. The cheese is mealy, the meat chunks are too large and taste processed, and the dressing isn’t my favorite. Ouch. I know. But it really isn’t a good value because I always leave most of it, and buying a second lunch is never good for the wallet.

Each time we tested standard menu selections we were in our seats within 8-12 minutes of walking through the restaurant’s main entrance. The longest wait we had was when we were fourth in line of the double-sided queue and we were still able to stay on target for both the 45-minute and 60-minute plans without rushing.

This is where everything went wonky. I ordered the same antipasto salad as above, but I asked for no onions. At first the cast member taking my order said that it would just be plain salad and dressing and gave me my total, but I asked if I could have the toppings on the side. There was a lot of back and forth that ate up a few minutes of my break, but we settled on the salad with dressing, a cup of cheese, and a cup of toppings which included the onions. I had to spread out the mixture and pick out the offending vegetable as best I could. The result was simply the same sad meal, just deconstructed, messier, and with a much longer wait. The entire process from entrance to table took 21 minutes.

My second attempt at a menu alteration here was with the chicken parmesan pasta. I asked for the sauce on the side, which didn’t cause any issues with the cast member at the register but took much longer than the standard order to prepare. We were at our table and ready to eat at the 15-minute mark.

Quick Summary – Pinocchio’s will work for lunch within your break times allotted in the Unofficial Guide One-Day Touring Plan for Parents with Small Children and the Touring Plan for Junior Pirates and Explorers Ages 4-8, provided you don’t make changes to menu selections. Either way, you probably aren’t going to walk away thrilled with the taste or value.

Cosmic Ray’s Standard Menu Selections – Both the chicken breast nuggets with fries ($9.99) and the foot-long hot dog with macaroni and cheese ($13.49) are tasty and big enough for two kids with average appetites to share. You may also get the foot-long with chili and cheese for the same price, or a plain hot dog for $9.99. For purposes of this test, we ordered the foot-long with macaroni and cheese and the Greek salad with chicken ($11.99) with no modifications to the order. We were at our tables at 9 and 11 minutes for these two tests, and both included trips to the Topping Bar.

Every entrée at Cosmic Rays includes a trip to their Topping Bar, a long row of toppings for burgers (or anything else) such as pickles, fresh tomatoes, shredded lettuce, sauteed mushrooms, French fried onions (the crunchy kind used on green bean casserole), and so on. For many people, the abundant topping selection is a main draw to places like Cosmic Ray’s and Pecos Bill Tall Tale Inn & Café in Frontierland. Cosmic Ray’s also provides small bowls for condiments such as creamy garlic ranch, honey mustard sauce, barbecue sauce, and the burger usuals of ketchup, mustard, and mayo.

Cosmic Ray’s really stood out with their ability to handle menu change requests. Our first change was to the foot-long with macaroni and cheese. I asked for the macaroni and cheese on the side, which didn’t seem to be an unusual request based on the speed of the transaction. We had our food, visited the topping bar, and were seated in 8 minutes. During this transaction I used Bay 2 and was second in line.

My second altered menu test was the Greek salad with chicken. I asked for no banana peppers and the chicken on the side. I was able to get my food, stop by the topping bar, and grab a seat near Sonny Eclipse within 11 minutes. I ordered my food at Bay 2 and was fourth in line. The salad was delicious and intact except the chicken I specifically requested be on the side. This was very different from Pinocchio’s because it appears that nothing in the Cosmic Ray’s kitchen is pre-assembled.

Quick Summary – Cosmic Ray’s is a good value and will keep you within your break times allotted in the UG One-Day Touring Plan for Parents with Small Children and the Touring Plan for Junior Pirates and Explorers Ages 4-8. Cosmic Ray’s is also the best bet for anyone with picky eaters, anyone looking to share a large meal, or guests with food allergies. The food is good, it’s served quickly, and you get a toppings bar and a show before you get back to your touring plan.

How do you incorporate meals into your touring plans? Where are your favorite quick service spots in the parks? Let us know in the comments.