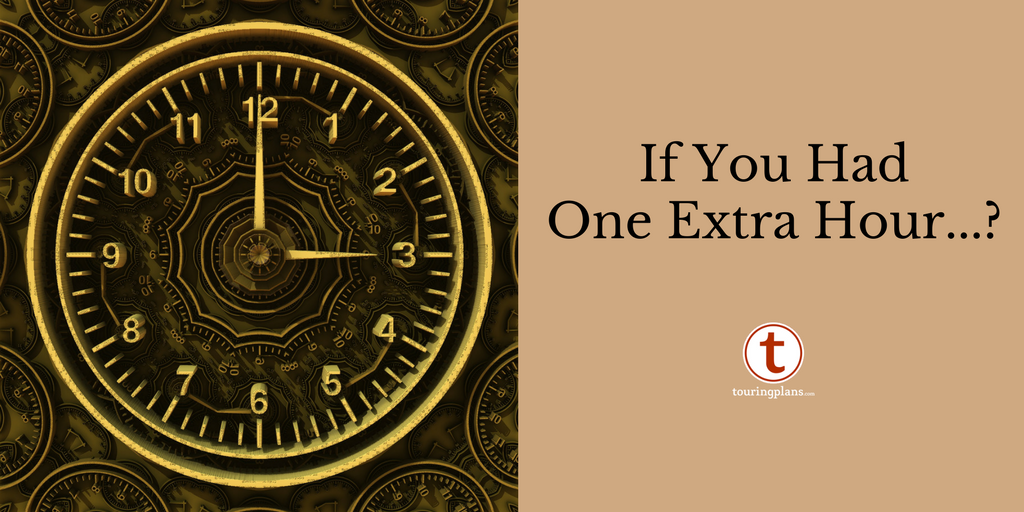 It’s that time of year again when we all cheer for getting that extra hour returned to us for Daylight Saving Time. (Am I wrong or do I think we should get that hour back plus interest?) Because that hour sneaks in during the middle of the night, I know that I don’t make the most of it. And with a young child and four-footed furry family, the idea of an extra hour of sleep really doesn’t happen either. But I wondered, if you had an extra hour that you could tack into a vacation day at Disney, how would you spend it? Would you do more of what you usually do? Would you do something that you just never seem to have time for? I put the question to the TouringPlans folks, and here’s some of the responses:

I would visit some of the hidden architectural gems in World Showcase. This one in Epcot is my favorite: I would stop and take time to relax. Anywhere. Too often on my vacations to WDW, I find myself with the go-go-go mentality, but when I stop for an hour and just really soak everything in, that’s when it’s vacation magic.

I would spend an extra hour actually getting in line for Flight of Passage, without a Fastpass+, and waiting the full hour. The ride is really that good. If I had an extra hour I would put a dent in Angela’s ice cream crawl!

With my extra hour, I’d try to do something I rarely do on Disney trips — nothing. I often tell myself that I’m going to take sometime to relax, smell the roses, that sort of thing, but I inevitably find myself caught up in the energy of the parks, and end up trying to squeeze in one more thing. Accordingly, with my hour, I’m going to sit on a park bench in World Showcase where there’s a nice breeze, grab a cocktail, and while the hour away people-watching. That or do Big Thunder Mountain on continuous loop. Haven’t decided yet.

If I had an extra hour, I would take time to actually set up a tripod and stop using a trash can for nighttime pictures!

I would book a Wilderness Lodge DVC cabin or Poly bungalow for the night and bask in getting the extra hour in it on my points because you normally only get 4PM to 11AM. This weekend, that extra hour on a Saturday night stay in a bungalow is worth 7.2 points! (note to self, never stay DVC during a Spring forward weekend). With one extra hour, I would begin work on another scintillating blog. Our readers deserve nothing but our very best.

I’d probably do something boring with an extra hour like sleep.

(Ed.: I think many readers who have a love/hate relationship with the early morning rope dropping schedule can agree with that!)

I’d be cool with an hour riding loops around and around on the PeopleMover. So how about you? If you had an extra hour that you could tack anywhere into your Disney vacation, how would you use it? Let us know in the comments.

4 thoughts on “If You Had One Extra Hour…”