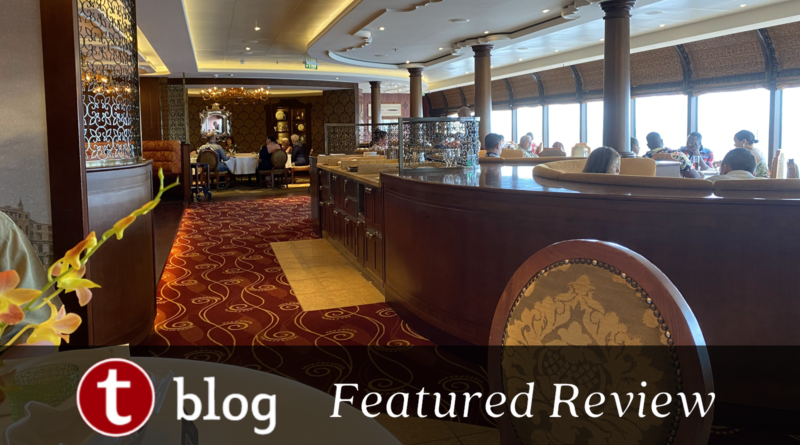 Palo is one of two fine dining experiences available on all Disney Cruise Line ships. I recently sailed on the Fantasy and had the opportunity to eat brunch at Palo, an option that is only available on Sea Days. Now I’m here to share my experience with you!

Palo is one of the adult specialty dining experiences on Disney Cruise Line, serving food inspired by Northern Italian cuisine. You can find Palo on all of the Disney ships. Although the layout of the ships is different, Palo is located directly above the buffet on each boat.

There is an extra charge to dine at Palo, and you must be 18 or older.  For brunch, the fee is currently $45; alcohol is not included. Platinum Castaway Club members may have one complimentary meal at Palo for the adults in their stateroom.

There is also a dress code; men need dress pants or slacks and a collared shirt, women need a dress, or skirt or pants with a blouse. Jeans can also be worn if they are in good condition, but flip-flops and tennis shoes are not permitted.

Reservations can be made online before sailing, or by contacting the Dining Services team once on board. Although exceptions may occasionally be made, guests may only experience Palo brunch once per sailing.

In the past, Palo included both menu offerings and a buffet. Currently only the menu items are available.

Guests may order as much (or as little) as they like from any of the menu sections. We were also offered an included starter cocktail; this was a choice of Mimosa or Bloody Mary for adults, or Martinelli’s sparkling cider for those not wishing (or not legally able) to have an alcoholic option.

A separate dessert menu was available in the Navigator app, but there’s plenty of food to review before we get to dessert. (Spoiler alert: we tried them all.) 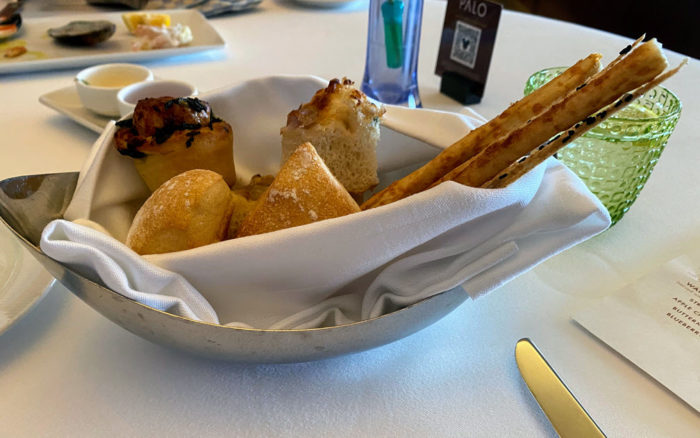 We started with an assortment of breads. Although it’s always a question whether you should spend valuable stomach space on the bread course, these were excellent with the Onion Focaccia and the Cheese Grissini being standouts.

There were two antipasti plates available.

Everything on the plate was perfectly cooked and the flavors were well balanced. The shrimp, in particular, were light and refreshing with the lemon serving to brighten the flavor and add some complexity without being very distinctive.

In case you were wondering what Caciotta al Tartufo is, it’s a semi-soft cheese flavored with black truffle shavings. It’s in the upper left of the plate above, and we found it to be mild and delicious. The pepper came with a cheese filling that complemented the slightly spicy sweetness and made this a standout bite on the plate. 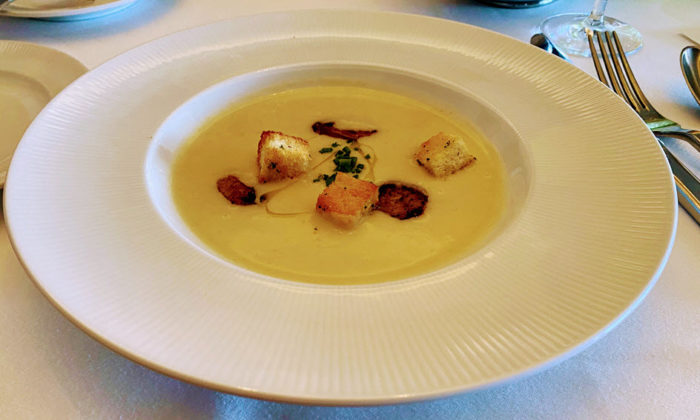 Although there were two soups on the menu, our server was so enthusiastic about the Celery Soup that all of us ordered it. He was right. The soup was not heavy, despite its creamy appearance. The flavor was unique; you wouldn’t instantly guess that it was celery. And the croutons and sausage provided a little bit of texture and flavor that got us to the bottom of our bowls before we knew it. 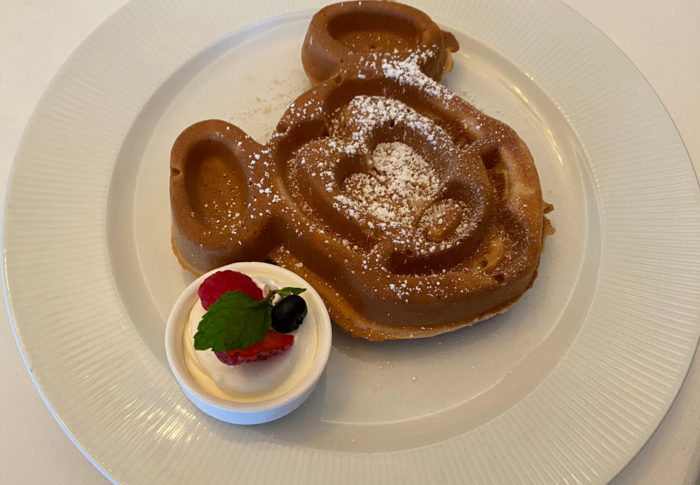 This is the biggest Mickey Waffle we had ever seen, with a flavor just like you are used to and a just-crisp exterior. It came with apple-cinnamon topping (not pictured); small chunks of apple in a sweet syrup flavored with cinnamon. Although the waffle was excellent, I found the sauce on the sweet side. Unless you usually douse your waffle in syrup I would apply it sparingly, and unless you really favor apple toppings it might be worth trying the strawberry version.

The menu serves up three variations on Eggs Benedict, and we tried them all.

The toasted English muffin topped with ham or Canadian bacon, a poached egg, and hollandaise is a classic for a reason. This one was perfectly done.

This one has such an unassuming name, it would be easy to skip right past it. But that would be a mistake. This version replaces the ham of the benedict with smoked salmon. I thought the hollandaise paired even better with the salmon. 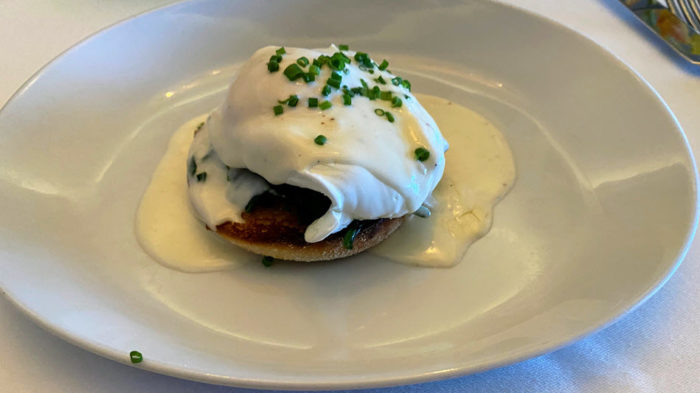 This vegetarian variant sets the egg on a bed of sauteed spinach. With the pop of salty umami from the ham or salmon gone, the hollandaise is swapped out for mornay sauce – a mild cheesy white sauce that provides that little kick of flavor to balance the dish.

All three versions were perfectly cooked with the whites set and the yolks runny, and all three were delicious. Any one of these would be a winner with your meal. 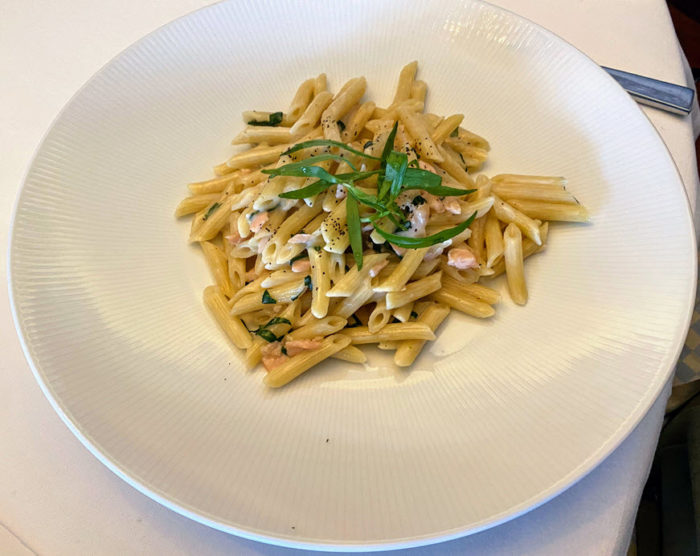 This creamy pasta was flavored with smoked salmon, baby spinach, tarragon and black pepper. Although each component could be clearly tasted, the relatively small amounts of everything except pasta and sauce meant that the overall flavor was mild and creamy. 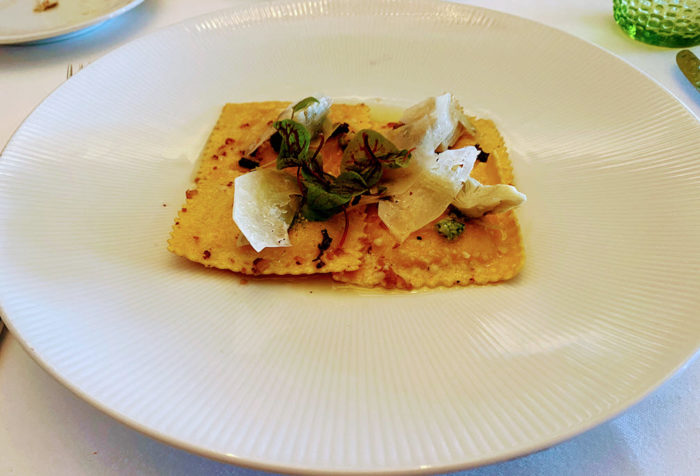 This dish was accented with morel mushrooms, meyer lemon, shaved pecorino romano and broccolini pesto. Again, the accent flavors were kept in check and if you like artichoke ravioli (I do!) then you will love this one. 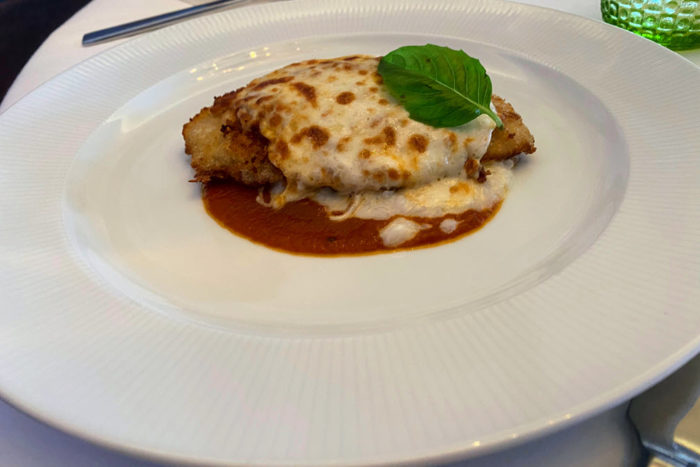 I loved this. The chicken was perfectly cooked, and the crust was crisp and light; the dish had clearly been finished immediately before serving to prevent the sauce from making the crust soggy. The sauce was not too acid and not too sweet, and there was also not so much of it that it overwhelmed the plate. This is a dish that appears on Italian restaurant menus everywhere, but the spot-on execution was what made this one really special.

This was a very classic lasagna, and like the parmesan chicken it was very well executed. The disagreement at our table wasn’t about how good this dish was — because it was absolutely delicious — but about whether it was easy enough to find good lasagna in other places that your time would be better spent with one of the other standout dishes.

The Palo brunch dessert menu is available in the Navigator app. 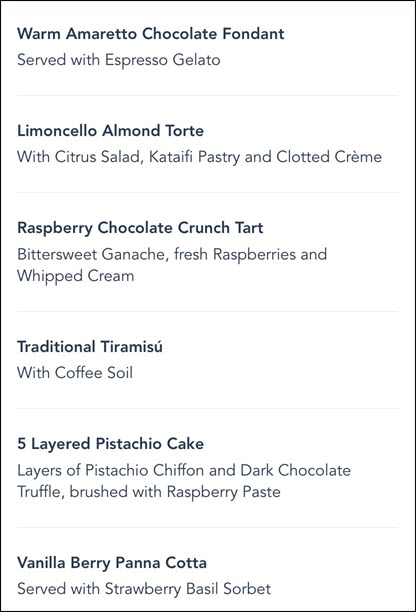 What a nice selection. In the interests of research and bringing you the best information (OK, who are we kidding?) we ordered all of them. If you’re too full to do that by the time you get here, just know that no matter what you pick you can’t really go wrong. 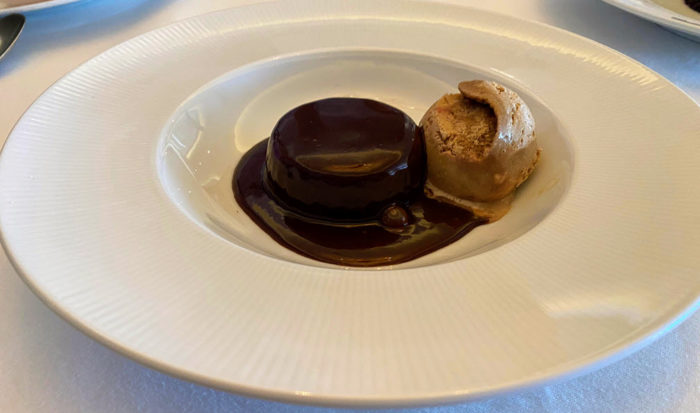 This was a-mazing. Think about a chocolate lava cake, but with a filling of liquid amaretti instead of chocolate.  I don’t know what they did to make the filling, but it had flavors of chocolate and amaretti and small crunchy bits that might have actually been crushed amaretti cookies. I wanted to bathe in it. (That’s a figure of speech, of course). This was served with espresso gelato, and I shared it with others grudgingly. 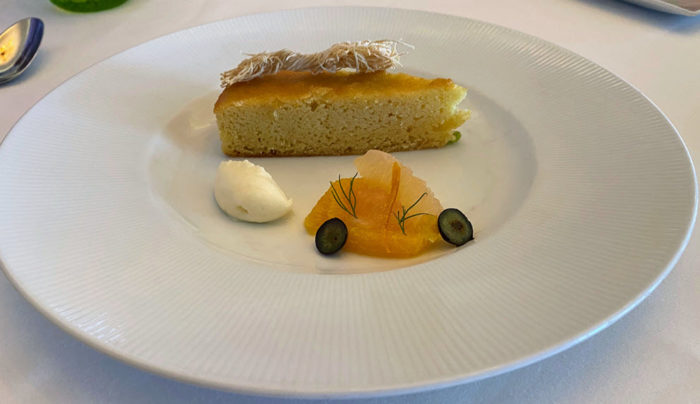 Served with citrus salad and clotted creme, and garnished with a crispy kataifi, this dessert was filling without being overly sweet or rich. The texture was firm without being dense, and the limoncello and almonds were easily recognized. 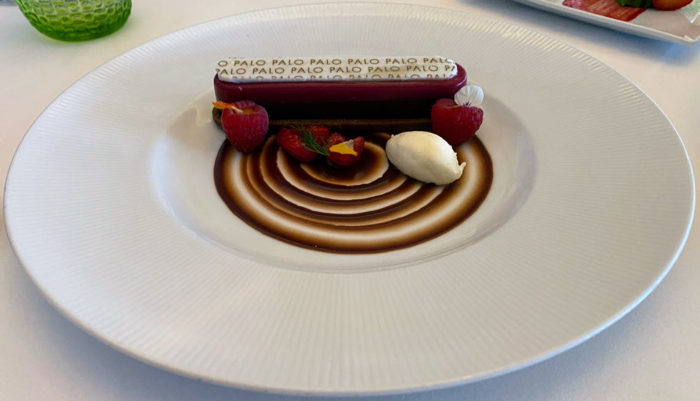 The presentation here was stunning. From the description I had expected something more like a traditional fluted tart, but what you see here is a layer of chocolate pastry crust, with a solid layer of chocolate ganache on top and then a layer of raspberry gelee. The chocolate and raspberry are a classic pairing and were well balanced here, with the textures of the crust, ganache, and gelee also creating a nice contrast. 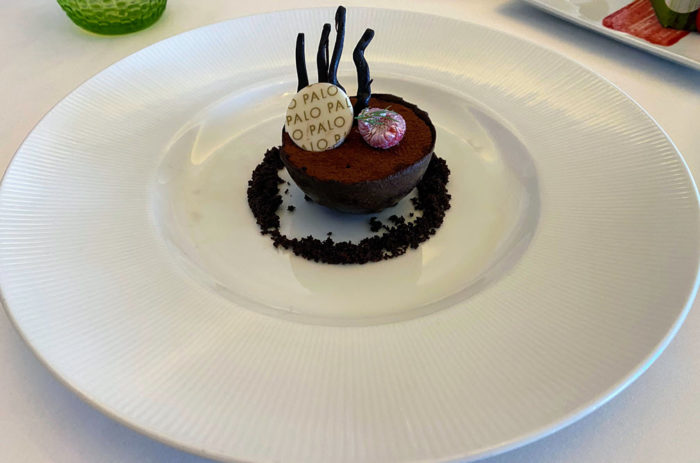 Were you paying attention when I raved about the parmesan chicken? This was the same. Tiramisu is an Italian restaurant menu staple, but this was next-level stuff. The creamy filling was airy and not overly sweetened, binding together the flavors of the chocolate and cookie instead of overtaking them as it often does. 100% would recommend.

Like the torte, this was firm without being dense, with a texture similar to halvah or other almond paste desserts but plenty of moisture. The fruit and chocolate were good counterpoints to the nutty flavor. 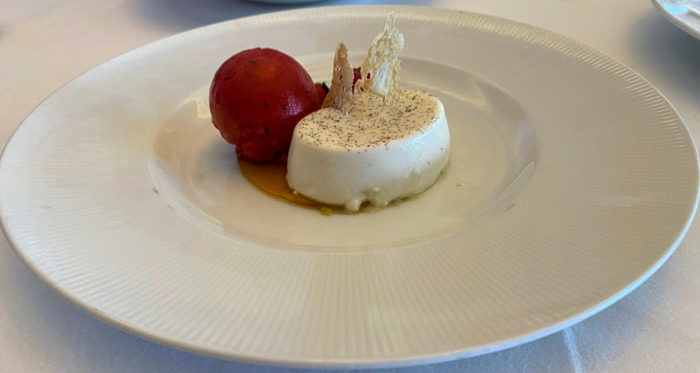 I’m not usually a fan of panna cotta as I tend to find it insipid, but I really liked this one. The flavor was creamy and full without being heavy at all, and the strawberry basil sorbet was refreshing although I didn’t really taste the basil. This was by far the lightest of the six dessert offerings.

Palo brunch was a terrific meal, a worthy way to spend some of our ship time on a sea day. Although the menu contains a number of classic items that can be found elsewhere, the top-notch preparations made the experience one that we’ll remember, and hopefully return to again.