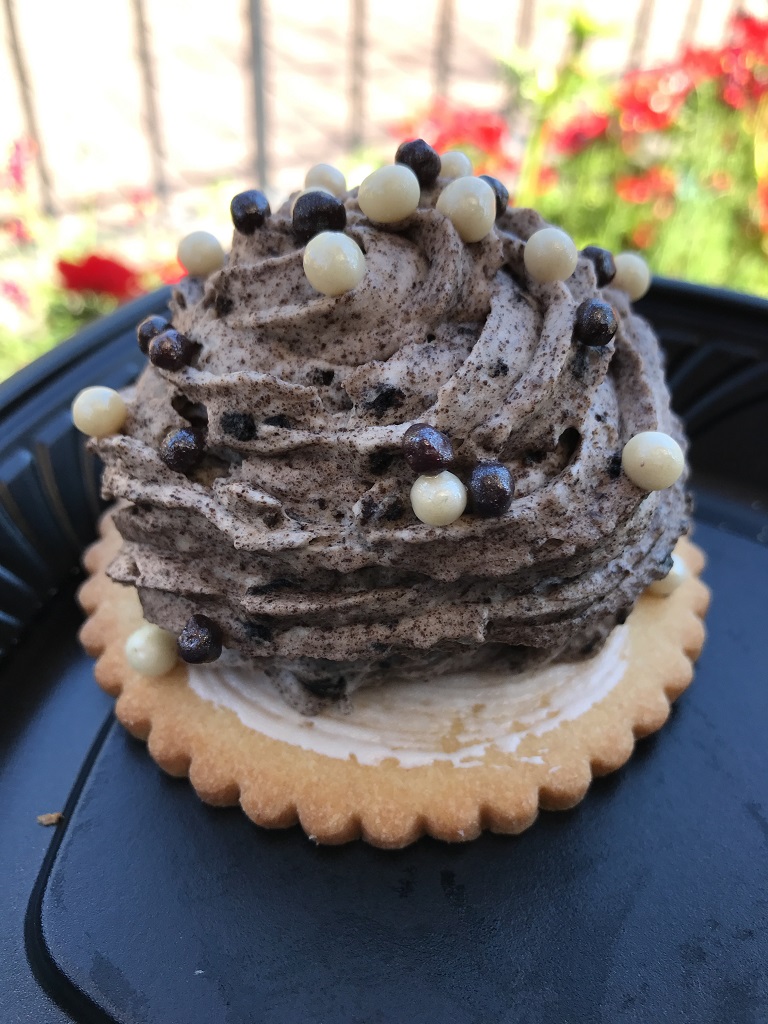 This is a review of Red Rose Taverne, a new restaurant at Disneyland which opened to promote the 2017 film, Beauty and the Beast. It temporarily replaces the Pinocchio-themed Village Haus Restaurant. Red Rose Taverne brings some new decor, and thankfully a much improved menu. First, lets take a look at the menu: When I saw this menu it struck me at how packed with unique items it is. A Cauli-Flower sandwich? Poutine pizza? I never expected to see items like this at a quick service theme park restaurant. In the last couple of years Disneyland’s menus have become a bit bland and uninteresting, but Red Rose Taverne seems to have a perfect balance for those looking for items like basic hamburgers, and others looking for something slightly more adventurous.

Watch our video review on the Red Rose Taverne menu. I’ll start off with what already is the most popular item by far, the Grey Stuff Gateau dessert. I was expecting this to be sickeningly sweet, but was pleasantly surprised to find it smooth, not too sweet, and overall very tasty. The cookies and cream-flavored frosting compliments the red velvet cake inside and I especially enjoyed the drop of raspberry filling. Overall a great dessert. Like I said this item is already very popular, walking around the restaurant I noticed 4 out of 5 tables had ordered it. The Lemon Rose Cake dessert isn’t as good as the Grey Stuff but I thought it was good and had a unique flavor and texture. Tom and Sarah Bricker reviewed this menu with me and they were also at a loss of how to describe it. The texture was almost like flan, but more lemon in flavor instead of caramel. As good as I thought this was, I would not spend $5.49 on it again. The Beast’s Burger is exciting for a couple of reasons. One, it comes with a side of Pommes Frites (aka garlic fries). Usually these are only available inside Disneyland at Cafe Orleans (a much more expensive full service restaurant). Two, the burger is fantastic. In fact, it’s easily the best quick service burger on property (yes, even better than the Carnitas Angus Cheeseburger at White Water Snacks). Beast’s Burger is topped with shredded beef, gruyère cheese, caramelized onions, lettuce, tomato, and horseradish aïoli. In my 33 years on this planet I’ve never had fries on pizza before, but now I’m a believer. It’s also topped with shredded beef, roasted garlic aïoli, cheese curds, gravy, and herb oil. It’s delicious, it has a lot of interesting flavors, and it’s under $10. The Slow-Cooked Beef Poutine was much better than I expected. I’m usually not a huge fan of poutine but this entree relied less on gravy, and more on a huge helping of shredded beef. I also really liked that they used seasoned waffle fries instead of regular fries. I was still skeptical about the Enchanted Cauli-Flower Sandwich, even after most of the Red Rose Taverne cast members said it was their favorite item on the menu. But wow was it good. Even Tom Bricker, who feeds his vegetables to his dog when Sarah isn’t looking, thought it was delicious. Speaking of Tom and Sarah Bricker, you can read their Red Rose Taverne review here. Chicken Sandwich A La Lumiere is arguably the weakest of the items on the menu, but it’s still much better than the other chicken sandwiches in the park. The fried cherry peppers give it a really nice kick. It also includes pommes frites, which is much appreciated.

Overall I think Red Rose Taverne has the best quick service menu in all of Disneyland. Up there in taste and quality with French Market. The former Village Haus Restaurant has had most of it’s decorations removed and covered in favor of Beauty and the Beast art and props. In the picture above you can see a rose has replaced the carving of Pinocchio. Overall the new decorations are good, but nothing outstanding. Which is understandable considering they probably will be removed by the end of the year. Figaro has been relieved of his exit sign pulling duties by Sultan. This is common around Red Rose Tavern, Pinocchio art has been covered up by decals like this. Gaston, antlers, you know the drill. More Beauty and the Beast art, and more antlers. More props and things. Items like these are scattered all over Red Rose Tavern. I’ve always love the ordering area of Village Haus. I get major Epcot vibes from it.

That’s Red Rose Taverne. I highly recommend you try it out because the menu is fantastic. Disney hasn’t given an end date for it yet, only saying it’s here for “a limited time.” Let me know what you think in the comments below.