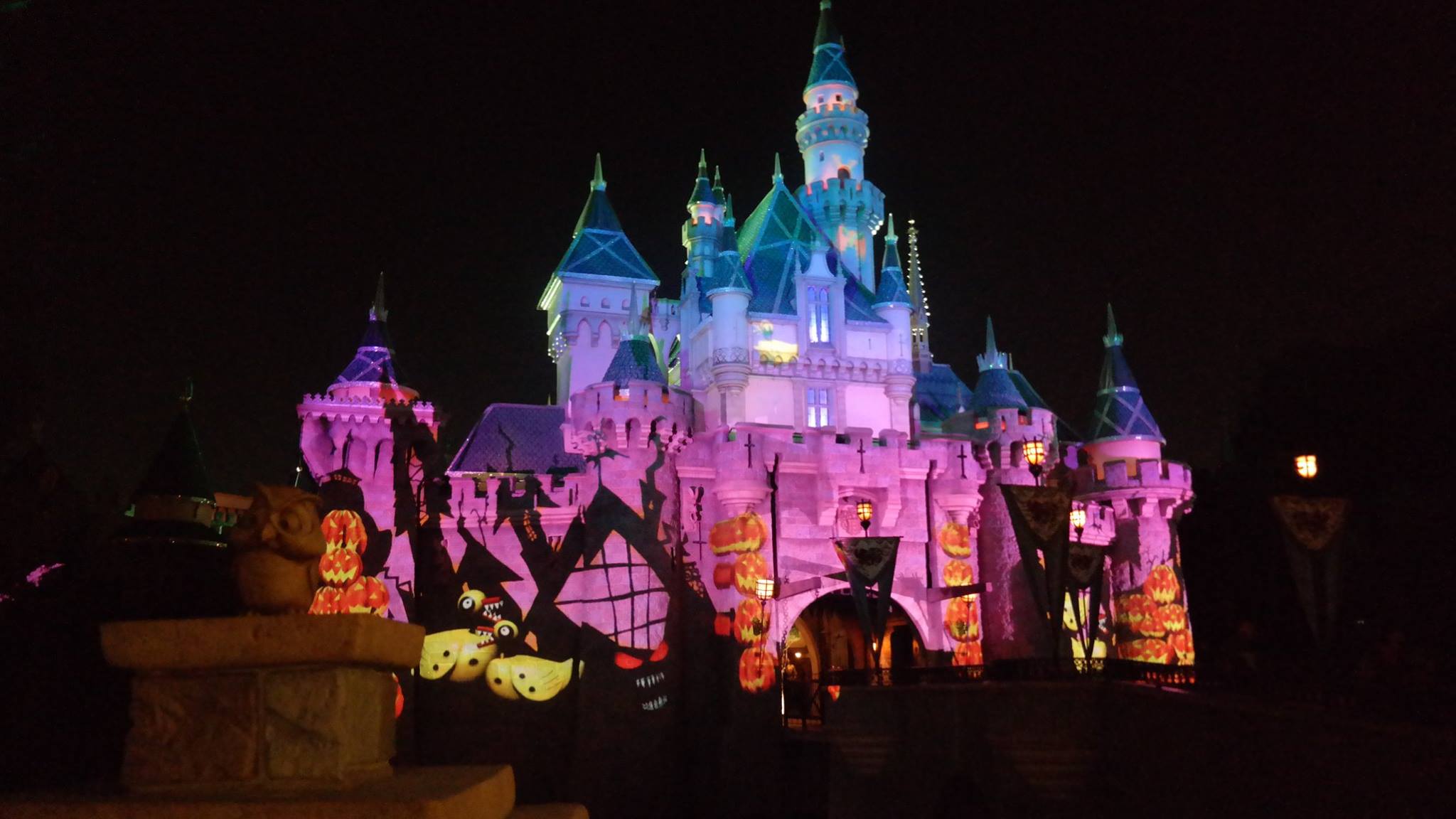 This week’s SATURDAY SIX takes a look at Halloween at the Disneyland Resort! Here at the SATURDAY SIX HQ we are suckers for Mickey’s Not Scary Halloween Party at the Magic Kingdom. Boo-To-You is one of our favorite parades, Happy HalloWishes is one of our all time favorite fireworks spectaculars, and – no matter how absurd it may technically be to “waste” your time doing it – picking up candy at the treat stations is a blast. This week though we are going across the country to see some of the Halloween offerings in Disneyland. With fun decorations, exclusive treats, and one of the most amazing top-to-bottom overlays of a land ever done, Disneyland truly brought it’s “A-game” this year and we’ll look at our favorite parts starting with…

In September, The Haunted Mansion began its annual transformation into Haunted Mansion Holiday. Inspired by Tim Burton’s 1993 stop-motion musical The Nightmare Before Christmas, this soup-to-nuts overlay features characters such as Jack Skellington, Sally, and Oogie Boogie cavorting among our favorite mansion haunts to music from Danny Elfman’s memorable score. Everything, and we mean EVERYTHING, at the Mansion has been tweaked for this special holiday version. The outside facade, the signage, the stretch room pre-show, and the entire ride is decked out with the Nightmare Before Christmas story, making it a completely different experience than the original attraction.

# 5 – Guardians of the Galaxy: Monsters After Dark

No one saw this coming. Guardians of the Galaxy: Mission BREAKOUT! – a ride which made its debut in Disney California Adventure just this past summer – already has a seasonal overlay with Monsters After Dark. Each night Mission BREAKOUT! switches over to Monsters After Dark with new lighting (both outside and inside the attraction,) a new storyline, and a new song created exclusively for this experience.

We may have a “blessing of size” here in Florida, but in Disneyland they have a blessing of snacks. Disneyland’s every day snack game is strong, but the resort takes it up a notch with seasonal versions of popular snacks along with making a bunch of tasty options for special occasions (like the return of the Main Street Electrical Parade.) For Halloween season Disneyland put the pedal to the metal and went all out in putting out a ton of unique snack items across both parks. Our resident Disneyland Foodie Guy Selga made a list of his favorite items this year including the chicken pot pie at Flo’s V-8 Cafe, S’mores Churro in Critter Country, and the Bat Wing Sundae at Clarabelle’s Hand-Scooped Ice Cream. Disneyland also outpaced their Disney World counter part in snack related items such as pumpkin drink toppers, skull glow cubes, and a next level bananas Headless Horsemen straw. I didn’t even know I needed a themed straw in my life until seeing it and now I can’t live without one!

# 3 – Ghoulish details abound in both parks

Both Disneyland’s Main Street USA and DCA’s Buena Vista Street are loaded up with Halloween decorations to get guests immediately in the spirit of the season when they pass through the turnstiles. From the Headless Horseman statue in DCA, to seemingly hundreds of themed pumpkins throughout Disneyland’s Main Street USA, to the Day of the Dead celebration in Zocalo park, there is a whole bunch of Halloween theming to enjoy. For those guests who like getting pics with characters, some of your favorites including Mickey, Minnie, Donald and Goofy are dressed in cute outfits.

Mickey’s Halloween Party is a hard ticket event held in Disneyland which – like WDW’s Not So Scary party – has trick or treating, photo ops with characters not normally in the parks,  a Halloween themed parade, and a special fireworks spectacular. Many guests get dressed up, some with extremely creative costumes. Hard ticket parties can be a hot topic in the WDW fan community, with some believing they aren’t worth the high price tag for the limited amount of hours you get in the parks. To that I say Nay Nay, as the combination of unique show elements along with the ability to have shorter waits for rides make for a fun evening in the parks. Disneyland fans get it, as every single night of Mickey’s Halloween Party sold out before the season started. Incredible.

With Haul-O-Ween at Cars Land we now have the gold standard for seasonal overlays in a theme park land. From top to bottom the entire land – which already is one of the best in any American theme park – was re-themed to what Halloween would be like in a universe populated by cars. There are so many truly amazing details everywhere you look, including faux movie posters (which have multiple layers of references), Cars characters dressed in costumes, and even zombie cars. The new food options, including the pot pie at Flo’s V-8 Cafe and the Spoke-y Cone Macaron from the Cozy Cone Motel, are brilliantly themed AND taste great. At night, the Radiator Springs mountain rage takes on a whole new color scheme with green, purple, and orange providing the perfect atmosphere. An E-Ticket overlay.

While not nearly as beloved as the Star Wars themed Hyperspace Mountain overlay, Disneyland’s Space Mountain does have a “spooky” Halloween version with Ghost Galaxy. While the warnings outside make you think you are about to enter a Halloween Horror Nights maze, outside of the soundtrack, some mood lighting, and projections, there’s not much actually “scary” about this ride. However, it is another unique overlay that we in Florida do not have, so be sure to treasure it you  blessed Disneylanders!

So there you have it: Six Reasons We LOVE Halloween at the Disneyland Resort! See you next weekend for the latest installment of the SATURDAY SIX, where we’ll look at something fun from the world of Disney and Universal. If you enjoyed yourself, be sure to check out The Magic, The Memories, and Merch! articles, or, for your listening pleasure, check out the E-Ticket Report podcast. You can also follow Your Humble Author on Twitter (@derekburgan).

Special Thanks to crack staff photographer Brandon Glover, Captain EO Superfan Guy Selga, California photo wizard Brian Pinsky, and blogger to the stars Megan Stump for their invaluable assistance with this article. Be sure to also check out Brandon on The Park Blogger podcast with goofballs co-hosts Aengus Mackenzie and LitemAndHyde , while fellow Potterheads may enjoy Meg’s work on the Central Florida Slug Club.

One thought on “SATURDAY SIX: 6 Reasons We Love HALLOWEEN at the Disneyland Resort”