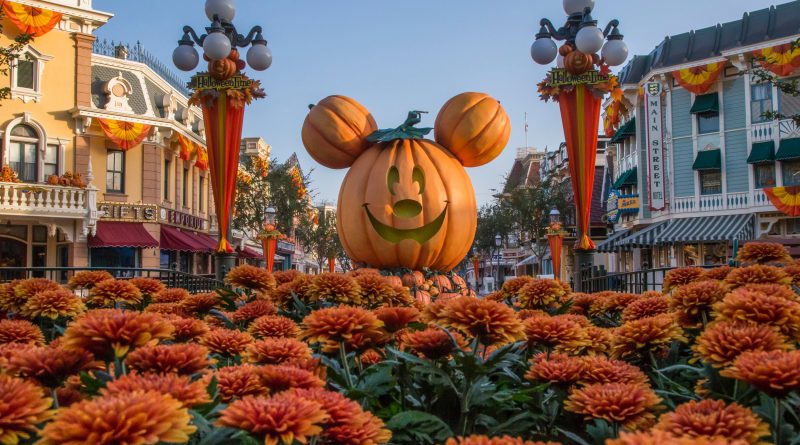 Get ready to experience some spookiness! That’s right, Halloween Time is returning, once again, at the Disneyland Resort. This year, the season that celebrates all things pumpkin, ghosts, and more will take place from September 6 through October 31 at both Disneyland Park, as well as Disney California Adventure. Halloween Time features seasonal attraction overlays, Halloween-themed décor, food and beverage offerings, plus encounters with favorite Disney villains. Let’s take a look at what each park has to offer its Guests!

During Halloween Time at Disneyland Park, enjoy Halloween fun when you enter the park with beautiful décor lining Main Street, U.S.A., including a giant Mickey Mouse jack-o’-lantern and the Pumpkin Festival. Guests will also want to make sure to catch the celebration of The Nightmare Before Christmas by riding Haunted Mansion Holiday. For the first time in nearly a decade, all Guests who visit Disneyland will get to enjoy the nighttime spectacular “Halloween Screams” which will feature supernatural projection and special effects on most nights of the season. However, on select nights, the show will be enhanced with the addition of fireworks.

When Guests enter Disney California Adventure, on Buena Vista Street, they’ll find that Oogie Boogie has once again taken over. Guests will see Halloween decor, as well as new Halloween magic on the façade of Carthay Circle which will feature bats swarming around, energy pulses from within and projections which will transform the iconic tower structure with spellbinding moments. Also, don’t miss seeing the 10-foot-tall statue of the Headless Horseman holding his jack-o-lantern head.

Moving over to Cars Land, the land will turn to Radiator Screams with Haul-O-Ween! Here, ride on Mater’s Graveyard JamBOOree or Luigi’s Honkin’ Haul-O-Ween. Guests will also encounter Lightning McQueen, Mater, Cruz and Red in “car-stume” as they get ready to go “trunk-or-treating.”

In Hollywood Land, Guests will want to make sure to visit Guardians of the Galaxy – Mission: BREAKOUT! in the evening as the attraction will transform nightly into Guardians of the Galaxy – Monsters After Dark. As the sun sets, we find out that while The Guardians have successfully escaped The Collector’s Fortress, they have accidentally left Groot behind. During Monsters After Dark, Guests help Rocket distract the creatures on the loose so he can rescue Groot.

Finally, in Paradise Gardens Park, the Plaza de la Familia will return for a celebration inspired by Día de los Muertos. This immersive experience celebrates the film, Coco, with live entertainment, craft making, food, interactive experiences and special merchandise. You won’t want to miss A Musical Celebration of Coco where Miguel joins the Storytellers of Plaza de la Familia and the Mariachi Divas. This show will take place multiple times a day.

Oh and as a reminder, this year, Guests looking celebrate with a hard ticketed event will be able to do so with the new Oogie Boogie Bash. Oogie Boogie Bash, takes the place of Mickey’s Halloween Party this year, and runs for 20 select nights at Disney California Adventure beginning September 17. Oogie Boogie Bash will feature exclusive  entertainment, including the new “World of Color” spectacular – “Villainous!,” character encounters, immersive treat trails and more!

For musical entertainment during Halloween Time, a capella performers will stroll throughout the Downtown Disney District harmonizing tunes such as “I Put a Spell on You” and “Grim Grinning Ghosts.”

During Halloween Time, at Disney’s Grand Californian Hotel & Spa, Guests will find a large confectionery sculpture of Oogie Boogie in the lobby and can enjoy sweets from the Halloween holiday cart. The Disneyland Hotel and Disney’s Paradise Pier Hotel will also have themed décor and hotel Guests will be able to participate in complimentary trick-or-treat festivities across all three hotels.