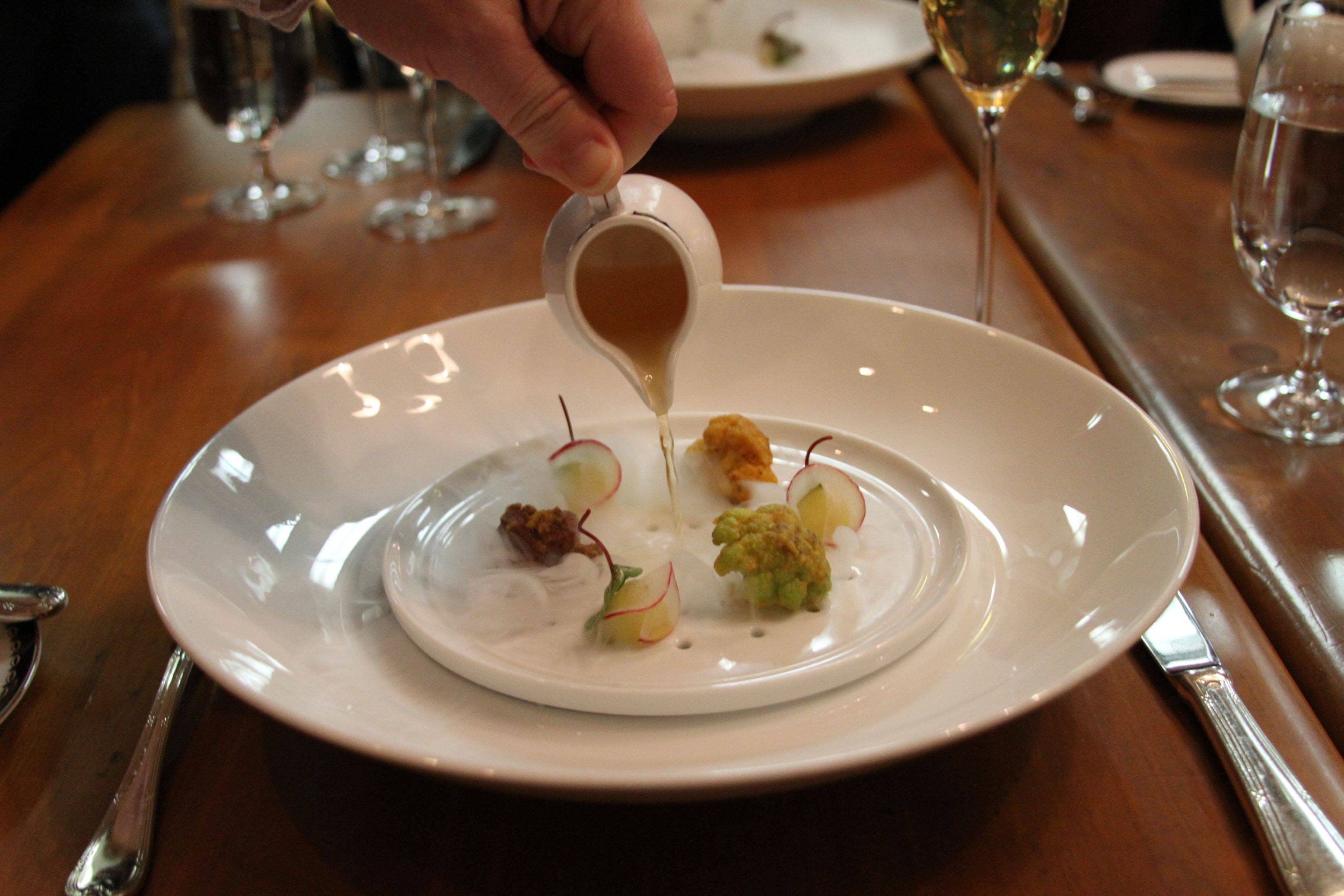 This week’s  SATURDAY SIX takes a look at the Top Six Vegan & Vegetarian Friendly Restaurants at WDW. When readers come to the SATURDAY SIX for food they are generally looking for the most unhealthy (Pop-Tart Sandwich), most outrageous (Beaches & Cream’s Kitchen Sink sundae), or most likely to have been created out of a fever dream (Animal Kingdom poop snacks). But there’s actually another side to theme park dining: a healthy side. Today we are going to look the top six vegan & vegetarian friendly restaurants at WDW. Some people choose to eat vegan because of dietary restriction or allergies, some due to animal welfare concerns, and others for their health, but whatever the reason Walt Disney World is a great place to accommodate their needs. Today we reached out to an expert in this area, Emily Woesthoff, former general manager of Erin Mckenna’s Bakery NYC in Disney Springs (a vegan bakery). Emily is a lifelong Disney fan and just celebrated her 11th year of eating vegan. There is no better person to guide us on this journey, so take it away Emily!

If I was given the good fortune to have a limitless supply of cash, and the superpower to make an ADR wherever I please, the following six-ish restaurants would be my go-to table service locations for vegan dining at Walt Disney World! While I haven’t yet managed to eat at every restaurant on property, I’ve dined at quite a few. The list below features my favorites, please keep in mind they are in no particular order.

Yup. The infamous meat-fest that is ‘Ohana made the list. Crazy, right? I waited a really long time to eat here for a few reasons. First, all anyone ever talks about when they mention ‘Ohana is that it’s very meat-heavy. I had only assumed that they basically sat you in front of a roasted pig with an apple in his mouth and said, “have at it!” Second, I’m not a huge fan of the stuff-your-face-as-much-as-you-can-we-are-not-going-to-stop-bringing-you-food restaurants. It’s just too much pressure! And finally, I had accidentally been reading the restaurant’s name as O’Hana for quite a number of years, and I just didn’t think Polynesian-Irish fusion food would work.

Much to my surprise, the vegan options at ‘Ohana are outstanding! The same lettuce wraps that meat-eaters rave about can be made vegan! There was also a considerable portion of stir fried noodles, vegetables, and tofu from which to choose, along with a starter of crispy pita chips and hummus, too! Vegan ice cream was available for dessert, if one can manage to save room for dessert at ‘Ohana. There’s also a bit of during meal entertainment, which definitely enhanced the experience. Since this restaurant is “all you care to enjoy,” the price can be a little steep. I recommend coming here with a big appetite!

Come for the olive bread, stay for the mushrooms.

Dining at Citricos always feels kind of fancy, and special. It’s a kind of fancy and special place. If you can score a seat near the window toward the back of the restaurant (which, for me, is rare), it can be a great spot for viewing Wishes, too!

The best part about Citricos is the olive bread; it’s phenomenal and I dream about it regularly. It’s extra delicious when there is some olive oil and sea salt around for dipping, so please feel free to ask your server for some the next time you’re at Citricos. Also, don’t be too shy to ask for more, they won’t judge. There is also an excellent vegan entree on the menu here! The Seared Tofu Ratatouille is vegan as is, and is delicious. The dish features tofu atop amazing, amazing roasted vegetables like mushrooms, zucchini noodles, tomatoes, and lentils. The mushrooms taste smoky, and really stand out among the other flavors in this entree. It’s definitely filling, but I recall I once also had a side of vegan mashed potatoes here, just for fun! I can’t promise this is a normal offering, but it wouldn’t hurt to ask!

4 – Mostly Sanaa, but also the rest of Animal Kingdom Lodge

Ok. Number three is mostly about Sanaa, but I’d like to add a subcategory within number three for all of the restaurants at Animal Kingdom Lodge, if you don’t mind.

First things first. Sanaa no longer offers a separate vegan menu, but that’s ok, we are coping with this unexpected loss and moving on. There are plenty of vegan options at Sanaa, special menu or not! Sanaa really stands out not because they have great vegan entree options (they do), but because there are so many things to eat before you even get to your entree! The seasonal soup does change from time to time, but I have enjoyed their vegan tomato soup, (whenever tomatoes are in season, I suppose) a number of times and it gets an A+. The bread service here also is fantastic, and a great way to try a whole bunch of different things at once. I also really enjoy the Bhel Puri, even though I’ve never quite been able to put my finger on exactly what I’m eating. All I know is that it’s delicious, and it’s vegan, so it’s ok by me.

About a year ago, there were several vegan entrees on Jiko’s vegan menu. Since then, Jiko’s menu has changed, and now has one vegan entree on the menu: The Vegetable and Tofu Sambusas, which I really enjoyed. The dish comes with saffron cashew rice, which is a great way to fancy up rice. This restaurant’s menu also offers flatbreads that can be made vegan with small changes. Please note the flatbreads are not vegan by default, but are worth trying if they can be made vegan!

Boma is another great restaurant for vegan options. However, as is the nature of a buffet, the offerings change from time to time. Even though you really love the peanut rice, and you really want to eat the peanut rice, they might not have the peanut rice on the particular night you dine here. I’ve never been disappointed with the options that are here, though, and I always find something new to enjoy!

For plenty of vegans and vegetarians, fake meat/mock meat just isn’t their thing. That’s fine, weirdos, but you’re really missing out on something awesome at Coral Reef!

Coral Reef was one of, if not the first location at WDW to feature a Gardein product on their menu. Their “Marinated Grilled Vegetables and Marinated Vegan Chick’n Breast” entree is vegan without making any changes at all. It features tons of grilled vegetables over black rice with pine nuts, and Gardein grilled chick’n. The chick’n adds a little extra oomph, and is a nice departure from the grilled tofu options at many other table service locations. The grilled vegetables and rice, though, could stand on their own as a really great option if you’d prefer to skip the Gardein option.

The servers at Coral Reef are always quick to note that this option does not feature *actual* chicken, which I’m sure guests who missed the word “vegetarian” and that clever apostrophe in chick’n have come to appreciate.

I had steadfastly avoided this restaurant for a while. I didn’t think there would be anything for me here except for an amazing view of Wishes. Well, what an unexpected place to find some really amazing vegan fare! Though there aren’t any obvious vegan options on the menu, much to my surprise, there was a separate vegetarian menu, on which everything could be made vegan! The regular menu also has a number of items that can be made vegan if tofu is substituted in as the main protein! I ended up trying both the Coriander and Shichimi-Spiced  Seared Tofu dish and the Pan-roasted Chicken (minus chicken, plus tofu). Both were excellent!

Of course, the fireworks view here is probably the best outside of Main Street USA. Yes, better than Top of the World or California Grill, I think. Narcoossee’s is a pretty penny, so I would definitely save this one for a special occasion, and make sure to stay for Wishes!

Ok. I couldn’t leave out a mention of Victoria and Albert’s. Obviously, this isn’t a restaurant we can all visit on every trip to Walt Disney World. I also understand that a number of people don’t see the point in dining somewhere so expensive, and that’s fine, I can appreciate that. However, since my meal here was the best I’ve ever eaten in my life, and also the longest (clocking in at roughly 7 hours of eating), it couldn’t go unmentioned.

There are not a ton of really fancy vegan restaurants that exist just yet, and dining at Victoria and Albert’s exceeds pretty much every expectation of what a restaurant should be. They give you a stool for your purse for goodness sake! The vegan options are amazing, and it’s definitely a meal worth experiencing if you’re up for it.

Also, if you’re going to spend the money to eat here, you might as well try the chef’s table. Go big or go home, you know?

I think there would be rioters with flaming torches and battering rams at my front door if I failed to mention Trail’s End. The truth is, I haven’t eaten there yet. I know, I know: the horror! I love Fort Wilderness and I visit often, but somehow, I still haven’t made it to Trail’s End. Unfortunately, I can’t speak to the quality of the food or the specific menu options that are available. However, I have heard from several credible sources that the vegan creations at Trail’s End are phenomenal. I’ve also seen countless photos of towering desserts, and artfully prepared entrees. So, Trail’s End, I continue to look forward to visiting you someday soon but until then, you will have to be just an honorable mention on this list.

BREAKING NEWS UPDATE! Emily was able to visit Trail’s End the night before deadline and we were able to get her quick reaction. This is a quote, “Trails was so good. You’ll die. I almost died. It was so good I almost puked.“

As Nic Cage would say, this is High Praise indeed, so be sure to get the vegan or vegetarian in your life over to Trail’s End ASAP!

So there you have it: The Six Best Vegan and Vegetarian Friendly Restaurants at Walt Disney World (AKA “Why Meat Eaters Should Avoid Disney’s Grand Floridian Resort At All Costs). See you next weekend for the latest installment of the SATURDAY SIX, where we’ll look at something fun from the world of Disney and Universal. If you enjoyed yourself, be sure to check out The Magic, The Memories, and Merch! articles, or, for your listening pleasure, check out the E-Ticket Report podcast. You can also follow Your Humble Author on Twitter (@derekburgan)

The Six Most Unique Dining Experiences at Walt Disney World

Six Reasons We LOVE Be Our Guest Restaurant

Special Thanks to crack staff photographer Brandon Glover, Vegan Emily: the most inspiring runDisney person we know (outside of Your Humble Author of course), and blogger to the stars Megan Stump for their invaluable assistance with this article. Be sure to also check out Brandon on The Park Blogger podcast with co-hosts Aengus Mackenzie and Brian Carey.