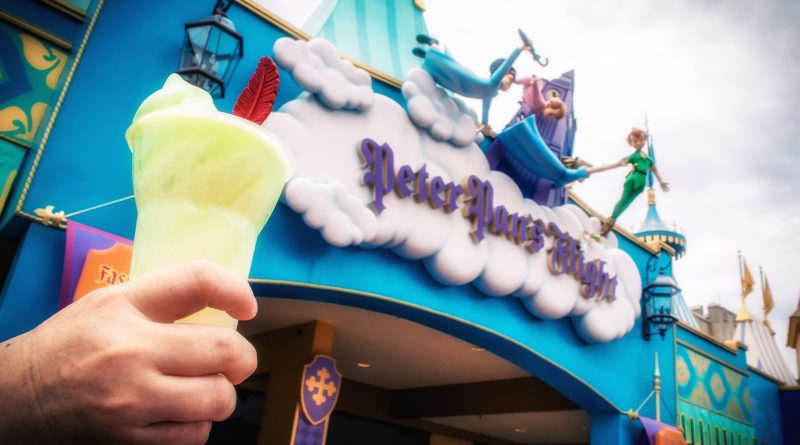 This week’s SATURDAY SIX takes a look at WDW Snacks You Gotta Try! Every once in a while we need to drop everything and just start eating a lot of snacks at WDW. And by “once in a while” we mean “all the time.” We’ve eaten a lot of incredible new options lately that will tickle your taste buds, along with some tweaks on some old favorites.

While these 1/2 pound chocolate chip cookies at Polite Pig in Disney Springs aren’t exactly new, they don’t get a lot of attention either. First, some backstory: Gideon’s Bakehouse is an Orlando bakery that specializes in mouth watering cookies and generally sell out every single day. Gideon’s is bakery royalty, often with lines out the door. Unfortunately they are about 40 minutes away from The Disney Bubble and to get their you need to take I-4 (a road which is even worse than you’ve heard.) Thankfully, you can get a taste of Gideon’s Cookies at Polite Pig and it is worth going out of your way to experience this delectable treat. This dense cookie is filled with seemingly a thousand chocolate chips, and the sea salt sprinkled on top takes the overall flavor to the next level.

Earlier this year Disney pulled a page out of the Universal playbook and posted on social media that there was a new Churro Ice Cream Sandwich at Sleepy Hollow Refreshments in the Magic Kingdom. However, anyone who then went to Sleepy Hollow then found out the hard way that the venue did not have the frozen treat in stock. Disney then deleted the tweet and pretended like nothing happened. Over a month later the Churro Ice Cream Sandwiches made their actual debut. In theory, this should be the greatest snack on the list. However. we have tried the sandwich several times, and have found the churro part to be less than ideal. Each time the churros – which should be warm and easy to bite into – cold and extremely hard to bite into. Instead of actually eating in like a sandwich, we end up eating each part separately. A for concept, C+ for execution.

Our long national nightmare is over. For YEARS Disneyland has had Mickey shaped beignets, while we in Walt Disney World – the straw that stirs the drink mind you – had to “settle” for regular shaped beignets. The screams of “be fair to Florida!” were heard world wide (actually it was just Your Humble Author on Twitter, but still.) Thankfully the wrongs have been righted, and at the Sassagoula Floatworks and Food Factory at Port Orleans French Quarter, we now have Mickey shaped beignets! Made fresh to order, golden fried, and generously covered in powdered sugar, just like we love ’em.

What could be better than Mickey beignets? How about a Mickey Beignet Sundae?! Also available at the French Quarter food court, guests can have their three Mickey beignets surrounded by ice cream, whipped cream, and chocolate sauce. Yes please!

Oh you thought we were down with beignets? NAY NAY! Staying at Port Orleans French Quarter, but moving across the lobby and over to Scat Cat’s Club we find the booze filled Baton Rouge Beignets. Here you get a serving of three (regular) beignets with the option of “jazzing” them up with Bailey’s, Kahlua, or Rumchata. We of course tried all three options. The beignets come with pipettes filled with liquor, allowing you to put as much – or as little – into each beignet.  This is “interactivity” we can get behind!

One of the more underrated gems at Walt Disney World is Amorette’s Patisserie in Disney Springs. Not only do they offer some of the tastier treats on property, but most of the items on the menu are works of art in and of themselves. One of their signature items are dome cakes that are themed to various Disney characters, including Mickey and Minnie. We’re huge fans of the petit cakes, which from the outside look like highly decorated miniature sculptures, but once cut open have all the layers of cake goodness that we crave. The hottest items this summer include the unicorn macarons and the Dole whip eclair (sold as the “whipped pineapple eclair.”)

Speaking of Disney Springs… for those who didn’t know, you can also get a Dole Whip or a Dole Whip Float at Marketplace Snacks. This can be especially handy when friends or family are in town and you want to give them a “Disney Fix” without having to go to the parks or try and talk your way into parking at the the Poly for the Pineapple Lanai. This option has been around for a while now, but guests often forget the snack options available at Disney Springs while being surrounded by so many great table service restaurants (and even more coming!)

Who would have thought one of the best treats this year would be found in Fantasyland? At Storybook Treats you’ll find the must-try Peter Pan Float. There are a lot of photogenic snacks at Disney, but the best treats are the ones that also taste great. During the summer, bonus points are awarded to those that help cool you off. The new Peter Pan Float hits the trifecta as a colorfully cool concoction featuring Key Lime soft serve ice cream over Sprite soda, topped with a decorative chocolate feather. The name is a clever take on the nearby classic attraction Peter Pan’s Flight (especially compared to this summer’s “I Am Float” root beer float at EPCOT) and the key lime soft serve is a unique taste as its a flavor you can’t get anywhere else at WDW.

While not a new drink at all, the guest favorite Tipsy Ducks In Love at the Joy of Tea in the China Pavilion is now served in a cute cup that somehow makes the drink even better. Ingredients: Bourbon whisky, coffee, black tea, cream, and chocolate syrup.

So there you have it: Six Snacks at WDW You Gotta Try! See you next weekend for the latest installment of the SATURDAY SIX, where we’ll look at something fun from the world of Disney and Universal. If you enjoyed yourself, be sure to check out The Magic, The Memories, and Merch! articles, or, for your listening pleasure, check out the E-Ticket Report podcast. You can also follow Your Humble Author on Twitter (@derekburgan).

Special Thanks to our spirit animal Brandon Glover, Captain Cruiseline Scott Sanders of the world famous Disney Cruise Line Blog, Universal Secret Shopper Siren HedgeHog’s Corner, the SAT SIX Fun Squad of Parkscope Joe and Nick, hot shot Michael Carelli, the Sommelier of Tony’s Town Square @ViewsAndQueues,  and blogger to the stars Megan Stump for their invaluable assistance with this article. None of this could exist without the support of goofballs like South of the tanks’ own Aengus Mackenzie and LitemAndHyde, and Potterheads may enjoy Meg’s work on the Central Florida Slug Club.