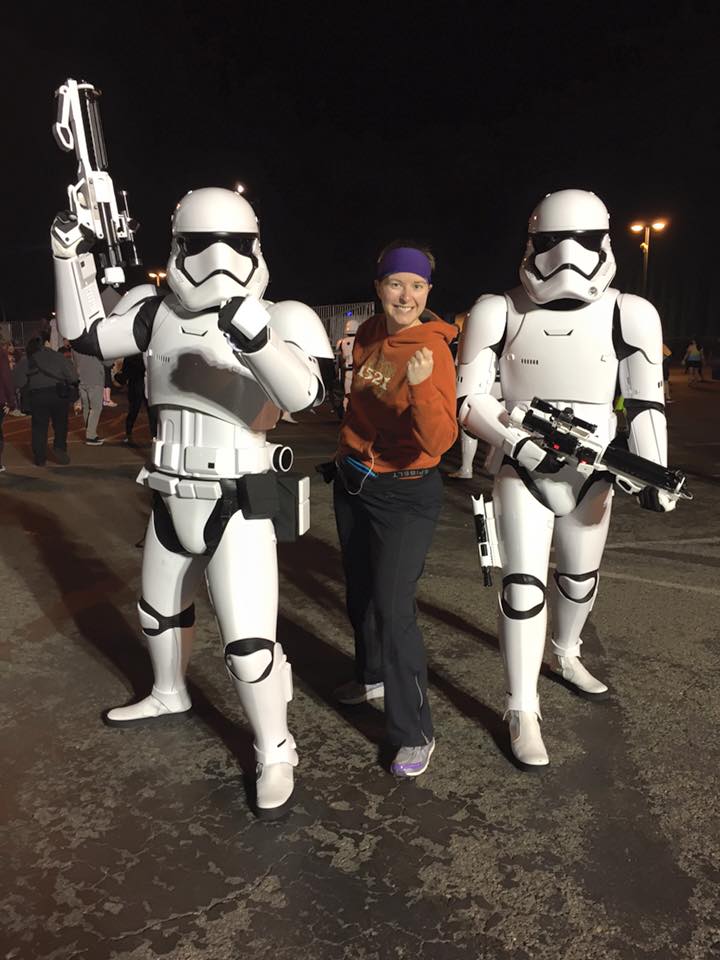 A few months ago I got the hair-brained idea that I should participate in the Star Wars Half Marathon Weekend at Disneyland Resort. Last weekend, I followed through on that crazy scheme and came away with three medals and a new appreciation for Disney athletes!

The weekend started for me on Thursday evening, after I flew in and made it to my hotel on Harbor Boulevard. I was able to walk right across the street to the bus terminal and esplanade of Disneyland without any issues, and then mosey through Downtown Disney as I went to pick up my race bib and register. I have heard many reports of long lines and insane crowds during bib pickup, and that was why I wanted to get that done during the last hour of opening on Thursday. My planning was rewarded with no line at all to pick up my race bib, and no queue when I wanted to look at the official Disney merchandise for the event. (These lines were much longer the next day, when I stopped in for one of the presentations.)

There were a lot of booths at the Expo, which covered apparel, nutrition, and health. Some of the gear I looked at had a definite galaxy flair, but couldn’t claim to be Star Wars gear due to licensing. However, there were plenty of officially licensed (and expensive) runDisney merchandise to go around. I picked up an event pin and a Rebel Challenge headband, and there was plenty of everything in stock for the end of the first day.

I really enjoyed looking at the encouragement signs that people were making in the center of the Expo floor. Though I didn’t see many of them on the course itself (most of the signs I saw were homemade), it is a nice thing to let your little one do after you’ve browsed the Expo floor.

I attended the “Running Through the Galaxy” presentation by Matt Martin and Cole Horton, which I enjoyed, even though it had very little to do with running. They gave us Star Wars Rebels fans a chance to see the season two (second half) trailer, which had just been released that day, on the big presentation screen!

For some, the next day started very early, with a 5:30 start for the 5K. Out of all the days I was at the parks (I was at Disneyland Resort through Monday), Friday was the day that I saw the most medals being worn around the parks. Kids especially were proud to show that they made it through the 3.1-mile race. The routine for the 10K and Half Marathon were basically the same. It was encouraged to arrive by 4:00 a.m. to check bags, use the restroom, and get settled, and that’s what I did on Saturday. However, that is not required, and definitely not necessary. I was one of the first 100 people on Saturday to arrive in the staging area (which also serves as the friends-and-family meet up spot after the race), and the only benefit from that was that there were three pairs of First Order Stormtroopers around doing photo-ops with almost no line. On Sunday, since I didn’t check a bag, I went straight to the corrals after getti ng up about 45 minutes later than the previous day.

The staging area show is broadcast at the corrals, as well (although you can’t hear it from way back in corral E). There’s a DJ playing tunes and encouraging runners to dance, but it’s also a chance to introduce the race announcers – Carissa and Rudy – and play clips from various Star Wars properties. My one Star Wars-related negative about this weekend was that it only used teaser and trailer clips from The Force Awakens, and didn’t use any of the soundtrack music on the course. I for one would have loved to have heard “Scherzo for X-Wings” as I ran through the Disney parks!

I was in corral E for the 10K and in D for the Half Marathon, and was glad that it happened that way. I was in the middle of the E corral on Saturday, and had a very difficult time getting into my run/walk rhythm because the course narrowed frequently as we, the runners, squeezed our way through backstage areas and the parks themselves and were all going at much slower paces. On Sunday, I went straight for the corrals because I didn’t want that to happen again, and ended up being near the front of corral D. There was lots of empty space in front of us, and I was able to establish my rhythm through the parks much better.

There were character and scenery photo spots through the parks portions, including one of the first opportunities for people to get a picture with BB-8! Other characters included Boba Fett, R2-D2, Chewbacca, and Ezra and Sabine from Rebels. Scenery spots included the speeder bikes and the trash compactor. All of them, by the time I got there, had significantly long lines, and I skipped all of them. I was curious whether or not they would reveal Kylo Ren, since they said he was going to appear at the Star Wars Launch Bay in February, but he was a no-show.

The course for the half marathon took the runners out of the parks right after Mile 4 and widened out significantly. This meant runners could really spread out and establish their pace for the rest of the race. Now the only obstacle was the fact that there was still nine miles to go. lave Leia bikini (they did have shorts on underneath).

Water and Powerade stations were ample throughout the course, and different cups made sure that you knew what you were grabbing and drinking. At Mile 8 there was a Clif power shot station, and the vanilla gel tasted like vanilla pudding! I wish I had asked for a few more.

There were several groups cheering runners on during the street portion of the course. Some were just family members or unofficial Star Wars affiliates, but the 501st Legion and other charity Star Wars groups lined up at one area and posed for quick pictures, and there were nine or ten high school marching bands in a couple of spots that were taking turns playing upbeat songs with cheerleading groups keeping up the energy as 15,000 runners marched past. Their enthusiasm was greatly appreciated! The weather on Saturday was perfect, but Sunday had foggy conditions which made it quite chilly! As the sun came up, the fog actually thickened before disappearing completely as I was starting my final mile. I was glad I’d packed the long-sleeved shirts! The mylar sheets that they handed out in the 10K came in handy after the race to keep out the cold, and many Re bel Challengers brought them back the next morning to wait in the corrals. However, the mylar has the ability to interfere with the chip timing, so runners were told to discard them before crossing the start line.

Once I crossed the finish line (yay!) the course wound back and forth as runners received their medals (not just handed to them, but placed over their heads by the volunteers), water, Powerade, the goodie box, and a banana before finally being released into the friends-and-family meet-up area. On Saturday the parking lot had a lot of people, but on Sunday the area was packed. They also had a live band up on stage in between DJ sessions. There were tents for first-aid, massages, bag pick-up, and charit I really enjoyed my weekend of Disney, Star Wars, and running. I think runDisney knows how to put on a good event for the amount of people that wish to run it. Most (but not all) of the Star Wars references and marketing felt authentic (not just, “I think this is what Star Wars fans like!”), and the runners themselves also help to make the races feel properly themed through their race shirts and costumes! My advice, if you’re thinking of running one of these races, is to not be intimidated by the pacing requirements (you need to keep a 16-minute pace through the race or you could be swept from the course). I ran slower than I usually do, and I was still comfortably ahead of the pacing. You don’t have to be a running enthusiast to participate in a runDisney race, and I think that’s what they want people to realize!

The pricing is extreme, and I don’t intend on running another Disney race for a while because I can’t afford another one! But doing it once was worthwhile, and if you’ve been given the resources to do so, I would recommend giving it a shot. Not only will you get the Disney experience, you’ll start yourself on the path to a more healthy lifestyle! Did you run any races during the Star Wars Half Marathon weekend? Have you done other runDisney events in the past? Share your stories below!