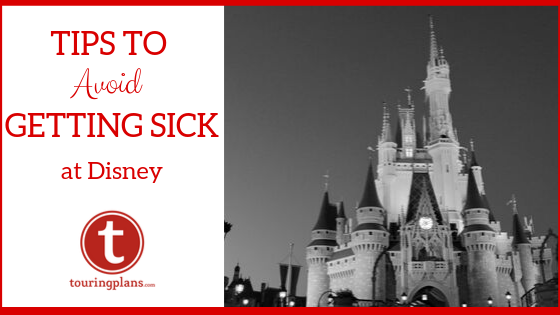 Walt Disney World (FL)
October 3, 2019October 3, 2019 Liz Mangan 9 Comments health
Share This!
It’s autumn! Magic Kingdom is all decked out for Halloween season, and kids are back to school. And with that, comes the dreaded cold and flu season. The added stress and exposure to germs while traveling can deliver quite the hit to your immune system at the best of times, but during this time of year, it’s even more important to be on guard. Returning from your trip with post-Disney vacation blues is bad enough. No one wants to add illness on top of it. Or even worse, getting sick while still on the vacation you’ve anticipated for months. So we’re here to help with our favorite tips to avoid getting sick while at Disney. 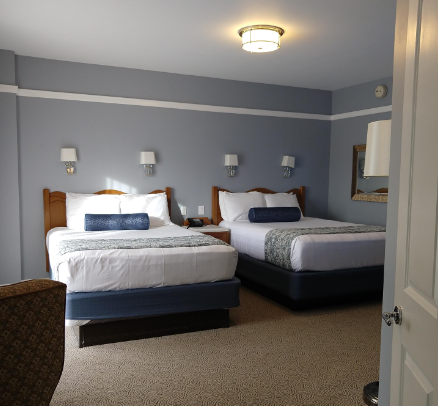 1. Step one, avoid Mission: SPACE Orange Side! Alright, I kid, I kid. Although in all seriousness, some people probably are better off avoiding that one. Our real first tip is to get enough sleep. I know I’m guilty of burning the candle at both ends, whether it’s the last minute scramble to get things packed or trying to open and close a park every day while I’m there. With so much to see and do on a Disney vacation, it’s tempting to take the attitude of “I’ll sleep when I’m dead”.  Lack of sleep can weaken your immune system though, so make sure you’re planning some Zzz’s. Quick nap in The Hall of Presidents, anyone? You could even use our Room Finder tool to pick a more tranquil area of the resort for sleeping.

2. Build in recovery days
Along with getting enough sleep, make sure you’re building in some recovery days. These are important not just during your trip, but before and after as well to give your body some time to rest and recuperate. Your body won’t thank you if you have to return to work immediately upon arriving home from vacation. 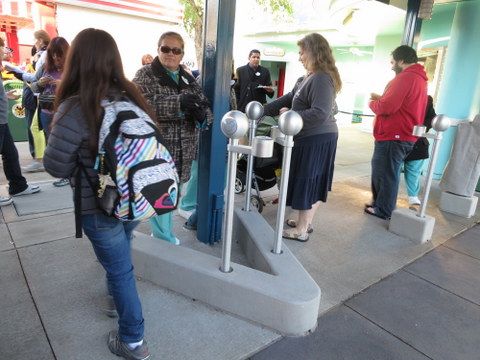 3. Limit what you touch

This one’s hard! What’s one of the first things you probably do on your way to the parks? Grab on to the handle bars on your Disney transportation. Then you finally get to the parks, and just to get inside, you have to put your finger on a scanner that tons of other guests touch. And what about all the fun interactive queues designed to entertain you while you wait? Believe it or not though, some germ covered surfaces are avoidable. Try not to touch things like railings or queue barriers for a start. You’d probably be shocked by how often the collective TouringPlans team has seen kids (or even adults) lick these. Keep hands off safety bars and doors, unless directed otherwise. Admire theming and props from a distance instead of reaching out with your hands. And resist the urge to touch your face! That’s like giving germs a FastPass to attack.
But let’s face it, are you really going to ride Buzz Lightyear’s Space Ranger Spin and NOT use the laser gun to aim for the top score? No, you’ll be touching things left and right. Which leads me to point number four.
4. Wash your hands and bring hand sanitizer
It’s not really practical to wash your hands after grabbing a hold of the Disney bus handrails, which is where hand sanitizer will do in a pinch. But definitely try to squeeze in a good wash before eating anything and obviously after going to the bathroom. If you’re staying hydrated (spoiler for tip number 7), you’ll probably make frequent pit stops where you’ll wash your hands regularly anyway. If your kids just couldn’t keep their hands off the honey wall at The Many Adventures of Winnie the Pooh or the graveyard distractions at The Haunted Mansion though, maybe make a quick stop after the ride for washing hands.
5. Bring disinfectant wipes
Have you seen what people do on airplanes? Face down, drooling on the tray table you’re about to use for your snack. Diaper changes, mid flight? All sorts of stuff! Disinfectant wipes can be used on the airplane, in your hotel (door handles, TV remote, and light switches), and at the parks. I can’t say that it’s necessarily recommended by the manufacturer, but I even use these to wipe down my phone. I use my phone so often at the parks these days between MDE and the Play app, that there’s no way it escapes all the germs unscathed. 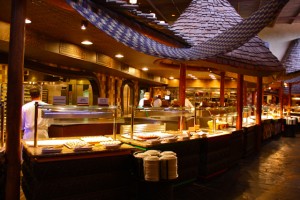 Even I don’t always follow this one, but if you’re really trying to limit exposure to germs, consider avoiding buffets. I know they usually have the sneeze guards to prevent food contamination, but honestly those aren’t going to stop much. You’re also probably handling serving spoons that dozens if not hundreds of people have touched before you and then not washing your hands in between grabbing the food and eating it. A better option might be one of the family-style restaurants, like Garden Grill or Liberty Tree Tavern. You still get all you can eat, but limit your contamination potential to just those at your table.

This should be on your list even if you’re not worried about getting sick. Dehydration can strike fast in the Florida sun, so make sure you’re drinking plenty of fluids. As a bonus, you’ll go to the bathroom and wash your hands more!

I’m all for indulging in Mickey Bars and Dole Whips, but don’t forget to get some nutrients in through some fruits and veggies too. A balanced diet can go a long way in keeping your immune system strong and healthy.
What do you think? Is any of this worth the effort, or do you think whatever comes will come? Do you follow any of these to avoid getting sick? Let us know in the comments below!

9 thoughts on “Tips to Avoid Getting Sick at Disney”