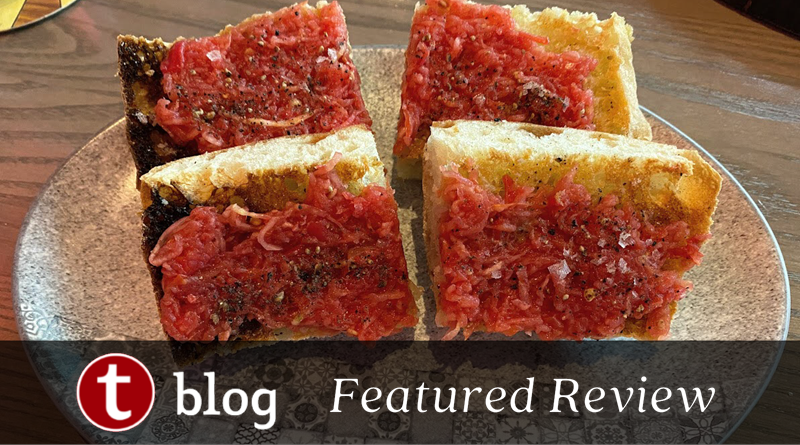 Toledo, Tapas & Steak is a rooftop restaurant at Disney’s Coronado Springs Resort. Appetizers range from $10-18, entrees from $29 to $45, and desserts are $8-$12. A full three-course meal will run you about $55-65, not including drinks or gratuities.

Toledo is in the Gran Destino Tower, so rooftop has real meaning here, and the windows on each side of the restaurant have excellent vistas of the Disney World Resort even if you are seated in the middle. If there are fireworks at Hollywood Studios they’ll be perfectly centered on one side. For a good view of the fireworks from Harmonious you’ll need to step outside on the balcony at the Dahlia Lounge next door. (One person in our party reported that the view from the Ladies Room was even better, but that seems a bit over the top.)

The restaurant is large and reservations are often available on short notice, but it is only open for dinner. The food is fine dining, but the atmosphere is relaxed and the dress code is casual – feel free to show up in whatever you wore to the parks, but if you felt like dressing up that wouldn’t be out of place either.

These zero-proof cocktails were strongly flavored and sweet, clearly reflecting the use of commercial lemonade and limeade. This is not out-of-keeping with the Spanish style though, and the fruit flavors were very prominent. Be prepared that these are not light, refreshing ades that can be gulped to quench your thirst from a hot day in the parks, they’re meant for sipping. But most kids will absolutely love the sugar content.

The chorizo was a delicious bite, with the braise infusing the sausage with red-wine flavor. Ask for extra bread to dip in the sauce.

If you’ve had the pan con tomate from Jaleo, this is a totally different style. The bread is soft and puffy with the charred, toasty top you get from 15 seconds on a grill, and the tomato topping was a punch of slightly salty, peppery tomato goodness. These vanished from existence almost instantaneously.

Caesar salad fans will recognize the deconstructed and reimagined elements of the romaine salad: soft-poached egg instead of the creamy egg-based dressing, anchovy, and clouds of fluffy manchego that are a little milder than the usual parmesan. The result is a salad that is both like and unlike a really good Caesar made with fresh ingredients in an upscale restaurant. I recommend that you cut the lettuce when it arrives to make it easy to mix the salad and get all the flavors in each bite.

Perhaps it is our fault for trying to share a charcuterie board for two among four people, but I think it speaks more to how delicious it was that I had to smack people’s hands to get my share of apricots and some of the cheeses. We were told that some contents of the board vary based on availability; ours contained two mild cheeses and a bleu, chorizo, a fold of iberico ham and two of serrano, and accompaniments.

This was fall-off-the-bone tender, with just a little bit of gravy to pair with the mashed potatoes. (Yes, I know they’re called olive-oil potato puree, and they were very yum – if nobody at your table orders a dish that comes with them, they’re a worthy option if selected from the Sides menu.) The peas with lamb are a classic, but I preferred a tiny bit of the jam in each bite – it was bright and sweet and really balanced the deep, meaty flavor of the lamb.

The filet was perfectly cooked to the medium-rare temperature we ordered. Other reviewers have commented that the beef in this dish was tough, and I expect that may arise from some mismatched expectations. I have a feeling that this cut is actually from the part of the tenderloin that is not the “filet mignon” – still filet, but not the tender, melt-in-your-mouth texture that you get with the filet mignon. It was definitely chewier than a filet mignon, but perfectly in line with a tenderloin, and I think the choice of cut here was deliberate. Filet mignon often doesn’t taste as “meaty” as other cuts, but the tenderloin has more steak flavor and I thought that helped it stand up to the other components.

As long as your expectations match the meat that will appear on your plate, this dish was delish. The meatier flavor of the tenderloin cut was a good pairing with the date jam, the mashed potatoes, and the lightly sauteed mushrooms. The jam was one of the stars here; don’t skip it.

I am a sucker for house-made potato chips, and these were excellent but didn’t quite seem to go with the dish. The chicken was well cooked, tender, and flavorful but didn’t particularly taste of a wine braise; the contrast between the wine flavors in the meat here and the chorizo appetizer was really noticeable. The winner on this plate was the roasted-tomato bomba rice, a risotto-like texture with a tomato flavor that was complex and just a bit tangy without being acidic. This dish was perfectly fine, but unless you’re in the mood for chicken my recommendation is to pick something else and just get a side of the rice.

For anyone looking at that plate and thinking that the lovely hunk of meat is the whole meal, I’d like to remind you that it comes with two sides and is meant to be shared. But, if you are OK with skipping your veggies to save stomach space for the meat, then this is a steak that more than justifies that decision. Ours was correctly cooked to temperature, with a terrific sear on the outside. The marbling was beautiful and it really delivered that STEAK flavor that ribeye is known for. The tomato sauce and onions were tasty and showed their Spanish-inspired roots, but they were also totally unnecessary. If you want STEAK, go ahead and order this one – you won’t be sorry.

The cauliflower was beautiful and roasted only lightly, with just enough seasoning to enhance its flavor. It was a large side that was definitely shareable (all the sides were), and we didn’t discover the creamy sauce in the bottom of the dish until we were more than halfway through. The sauce was good, but we didn’t miss it before we knew it was there.

I am not a fan of shishito peppers at all, so I can only report the opinion of others at the table, none of whom speak “food-ese”. They said it was good.

The potatoes in the patatas bravas were nicely roasted with a crispy, seasoned skin. The romesco was light and tangy as it should be. I enjoyed this dish a lot, but I don’t know that putting romesco on a roasted fingerling potato makes it patatas bravas. I admit this might just be that when it comes to food I can be a real snob.

Since the brussels sprouts listing on the menu doesn’t say anything about the preparation, we didn’t have any idea what was going to appear. When they first showed up, they were so dark that I was worried they would have a charred flavor; sometimes roasted brussels sprouts can go way too far. I could not have been more wrong. They were deeply roasted without being bitter, with a sweet, darkly caramelized flavor and just a hint of acid to keep it from being cloying. Unless you are one of those people who thinks broccoli and its ilk are evil, you should give this a try. It was by far my favorite of the sides we tried.

The cheesecake was fluffy, not dense, and only the coating tasted of almonds. Opinions on this were mixed at our table; some loved it and some thought it was meh.

The tapas bar was a really neat idea, and the small buttons of flavor on top were all good. But what we really loved about this dessert was the crunchy-coated chocolate cake beneath them.

The crema catalana was a loose custard, not too sweet, with the orange and vanilla notes so fragrant that you could taste them with your nose. The tuile was a deep, dark chocolate that was delicious, but better eaten separately from the custard.

The cafe con leche was a bed of whipped cream, topped with a circle of cake, a dark chocolate cream filling, a chocolate disc, and more chocolate. If you’re in the mood for chocolate this is a good choice, but if you don’t like your chocolate darker than semi-sweet look elsewhere.

We had a great meal that showcased a range of Spanish cuisine. The natural comparisons here are to Topolino’s Terrace (because of the rooftop view) and to Jaleo (because of the tapas). I think Toledo easily holds its own against either. There were a few dishes with what some might see as minor errors in the plating, but everything we had was delicious, well-cooked, and properly seasoned. The rioja-braised chicken was easily the least standout of the dishes we tried, and I would still be more than happy to order it again.

Have you eaten at Toledo? What was your experience? Let us know in the comments!