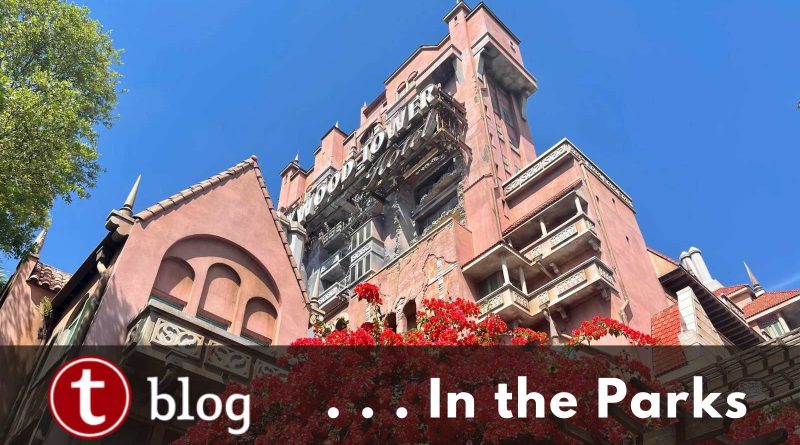 On Saturday, March 13, we did another side-by-side test of full-day Hollywood Studios touring plans. We had a few roadblocks during this test. We were hoping to have 4 of our staff in the park. Unfortunately, only two of us could get Park Pass reservations – park passes are just harder to get during spring break.  So Chrissy and I were the test subjects.

The other setback was that we were hoping to include Rise of the Resistance in the test, but we failed to get a boarding group at both 7:00 a.m. and 1:00 p.m.

Without Rise of the Resistance, here are the twelve attractions we included in our plans:

The predicted Crowd Level on March 13, was a 5, and the actual crowd level was a 2 at Hollywood Studios.

Both Chrissy and I arrived at Hollywood Studios before the park opened. I walked from the Swan hotel, and Chrissy drove. I was at the temperature screening at 8:10. Chrissy was 15 minutes behind me, because the Studios’ toll booths didn’t open until 8:15 a.m., which is when the park opened.  So I was inside the park and walking to my first attraction before Chrissy was through the toll booth. If you want to see a live stream of the test, check out our Twitch channel.

We have been seeing a lot of operational problems at The Twilight Zone Tower of Terror, so I decided to ride Tower first, and then start a touring plan with the eleven remaining attractions. The optimizer thought this wasn’t a good idea – it wanted me to start at Slinky Dog Dash. Both Chrissy and I re-optimized our plans multiple times during the day. In both cases, our plans were completed in less time than the initial prediction.

Even with different starting points and times, steps 2, 3, and 4 were the same. We ended up at the same showing of MuppetVision 3D, I just ended up arriving earlier and waited longer for the same show. After Muppets, we split up and went to different shows.

I expected that my 15-minute head-start over Chrissy was going to be a huge benefit. But my overthinking things and going against the optimized plan cost me. Chrissy got a bit lucky getting a Star Tours simulator quicker than me, as well as not having to wait for Muppets, which gave her a slightly lower average wait time.

After finishing the initial touring plan test, I was curious to see what could I get done in the last three hours the park was open. I took a short break and created a new plan that started at 5:00 p.m.:

A consistent pattern that we have seen at Hollywood Studios is that wait times peak early, and people leave the park early. And with the park closing early, it is not a popular park to hop to. These two patterns make touring Hollywood Studios late an attractive option. 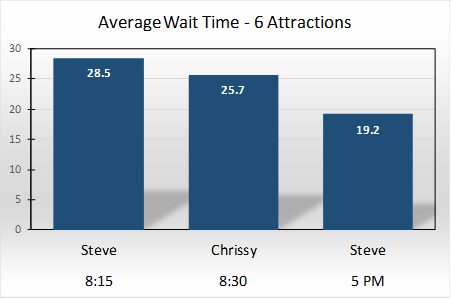 Comparing the average wait times of just the 6 attractions I did starting at 5:00 p.m., the average is much lower later in the day.

An optimal plan would have you arrive at Hollywood Studios at 8:15, and tour until late morning, take a long break and finish your touring at the end of the day. If you don’t want to break up your day, arrive later in the day and avoid the morning madness.

Everyone should try and get a Rise of the Resistance Board Group at 7:00 a.m..