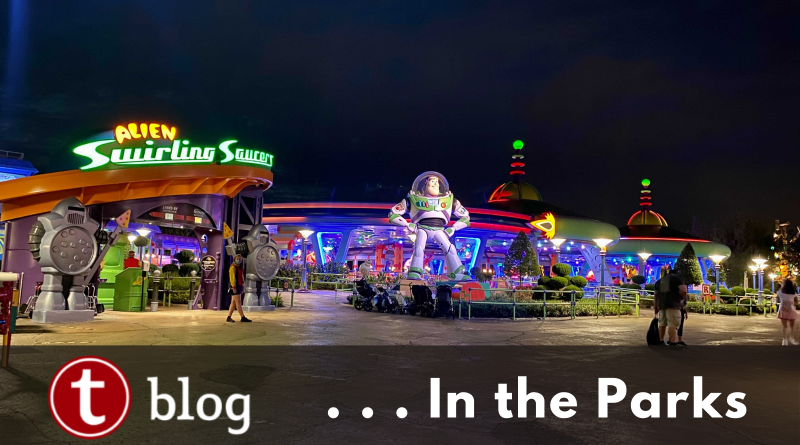 Almost every week since last fall, we’ve devoted at least one day in the parks to side-by-side testing of different touring plans.  This past weekend, three of us we were at Disney’s Hollywood Studios. Our goals were to see:

The Early Theme Park Entry test was requested by a bunch of readers after we did the same test at the Magic Kingdom on February 6, 2021. For the Studios, we had our first tester – Chrissy – arrive at the park a full hour before official opening, so she could start her plan as soon as she was admitted into the park.   This would be our “on-site guest” in this test.

A second tester – Ivonne – started her plan at 9:00 – official park opening; Ivonne was the “off-site guest” for this test. A third tester – Morgan – started her touring plan at 2:30 pm. All testers had the same nine attractions to complete:

The predicted and actual Crowd Level on February 21, was a 3 at Hollywood Studios.

Chrissy arrived early and was in the park at 8:20. The first thing she did was mark the park “open” and optimize her plan. The optimized plan predicted that she could ride both Mickey and Minnie’s Runaway Railway and Slinky Dog Dash before park opening.  Those first two steps went as planned.

The plan went off track when Chrissy arrived at The Twilight Zone Tower of Terror. Her wait was twice what we expected. She had a long pause in the queue where it did not move. This is never a good sign, and we discovered that the attraction was only operating at half capacity.  Her expected wait of 26 minutes ended up being more than double that: 54 minutes.

To get back on track, Chrissy re-optimized her plan. With peak wait times approaching, the TouringPlans software sent Chrissy to Muppets and Star Tours. After her lunch break, she re-optimized to get her final steps. The posted wait time at Toy Story Mania! was 80 minutes! A castmember told Chrissy that the ride was running only one 1 track – one-third of its capacity. With the ride running at 33% capacity we decided to skip the attraction. With a lunch break, Chrissy’s plan took her 7 hours to ride 8 attractions. Her average wait time was 26 minutes per attraction. 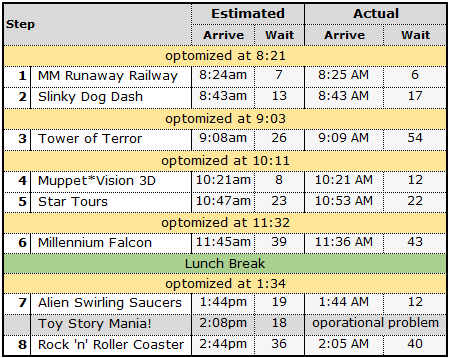 Our “off-site guest”, Ivonne, started her plan at 9:00. Like Chrissy, Ivonne’s first step was Mickey and Minnie’s Runaway Railway. Her morning tracked closely to our predictions. Ivonne was in the queue for Toy Story Mania! when Chrissy was told the ride was only running one track, and that explains her actual wait time of 56 minutes (we predicted 18, and 56 is almost exactly three times that). With a lunch break, Ivonne’s plan took her 8 hours to ride 9 attractions. Her average wait time was 35 minutes per attraction. 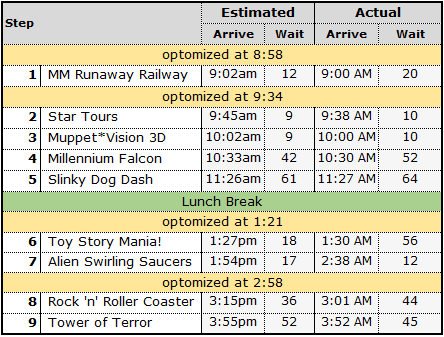 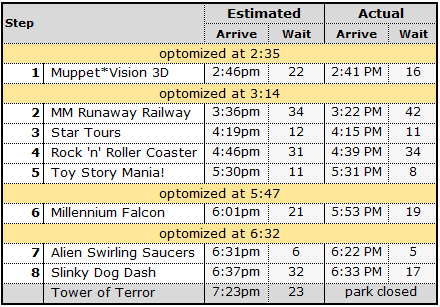 Unfortunately, Chrissy and Morgan only got 8 attractions complete. This makes comparing the plans a bit more complicated. Even arriving early, it is impossible to avoid some long lines. Even with Chrissy’s advantage of riding two attractions before the park opened, Morgan waited on average less time by starting in the afternoon. By 4 p.m. Morgan could tell that the park was less crowded. 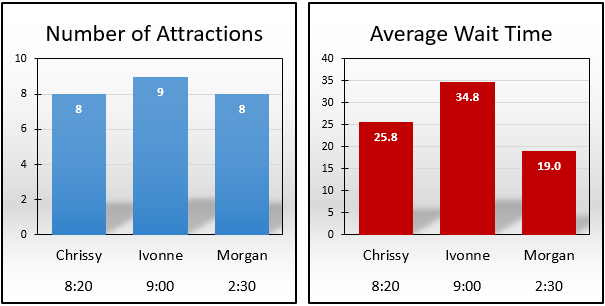 Updates We’re Making to the Models

Chrissy’s plan was impacted by a couple of things.  The first was that Tower of Terror was running at half capacity, without any sort of refurbishment or “reduced capacity” notification from Disney.  When that happens in the middle of the day, our wait-time models pick up on Tower’s unusually high wait times, so that touring plans are adjusted.  But we didn’t get enough wait times before Chrissy arrived – in this case, My Disney Experience didn’t display in-park wait times before official park opening, even though the park was open.  If we had that information, we think the touring plan software would’ve routed Chrissy to Tower of Terror first thing in the morning.

To work around this, we’re updating our wait-time models for Tower of Terror. At the end of each night, we’ll compare Tower of Terror’s average wait times for that day and the previous day, to the average wait times at other attractions in the park.  If Tower’s average wait exceeds a certain threshold (say, 150% of Rock ‘n’ Roller Coaster’s average wait), we’ll assume that Tower was running at reduced capacity and will also operate at reduced capacity tomorrow.   When you re-optimize your touring plan at the beginning of the day, your plan will have a reasonable guess as to whether Tower is running normally, and make the best choice.

Look for this update to happen within the next two weeks.

Star Wars: Rise of the Resistance

Since users can get a Boarding Group before entering the park you can plan your Hollywood Studio’s day around when your Boarding Group will be called. Disney’s app will give you an estimated return time, and on the Touring Plans Rise of the Resistance Page you can see the progress of Boarding Groups being called for the current day. 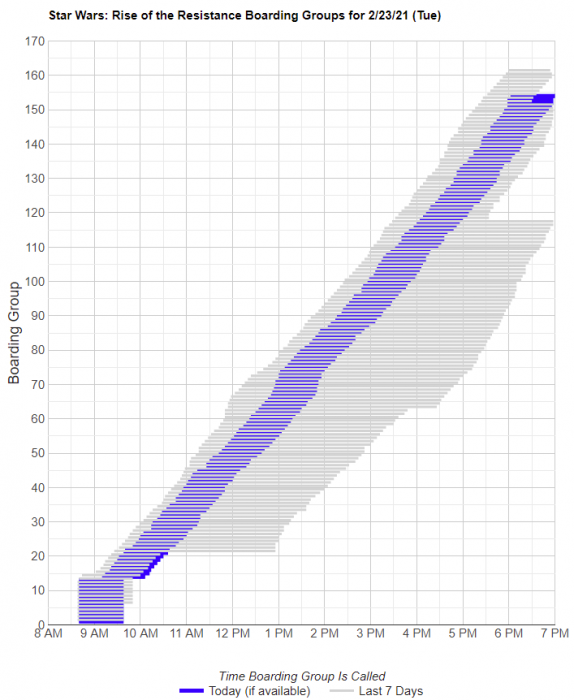 During this test, we had the idea to stream both the testers in the park, and us data geeks tracking their progress. You can re-live our first attempt at live streaming at https://www.twitch.tv/touringplans.

We plan on doing an Animal Kingdom Touring Plan stream Saturday, February 27, starting at 7:30. The stream will be available on Twitch and YouTube. Live streaming on Twitch and YouTube also gives us a chance to answer questions from readers like you! Subscribe to our channel on YouTube or follow us on Twitch to be notified when the stream goes live.