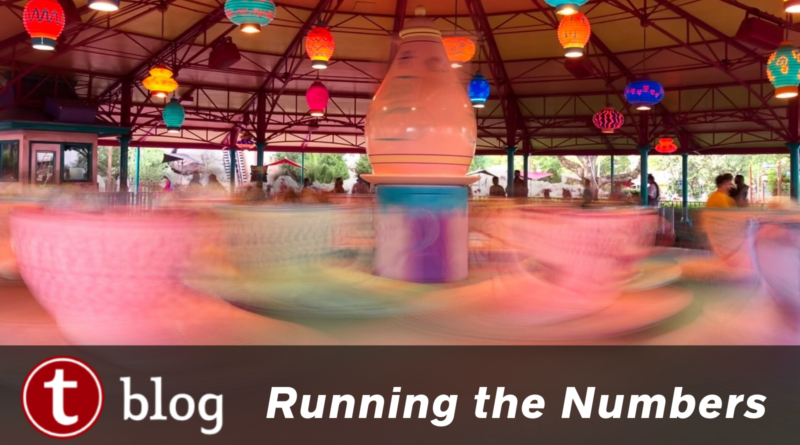 Earlier this year we took a spin through our survey data to try to get a feel for which attractions in each park are popular with returning visitors.  Today we’ll be using the same data, but slicing it differently — instead of breaking out the numbers by park, we’ll be looking at clusters of similar attractions across all four parks.

There are some gotchas to be wary of here; see the original article on Animal Kingdom attractions for a complete list and steps that were taken to adjust for them.  The good news is that we have a large number of data points (up to 30,000 in some cases), and that helps to blunt the effect of any “dirt”.

The table below shows fictional rides in a fictional park, but within each category this same breakdown will be used to display the data.  Colors and histograms are scaled across the entire dataset.  Click to expand any chart image.

One thing to note — whatever margins of error might apply to this data, it is data.  In contrast, any interpretation of that data that I do here is just the musings of an educated Disney World visitor. That doesn’t necessarily mean it’s wrong, but it does mean that it might not be right; feel free to offer your own spin.

Thrill rides are the cornerstone of most amusement parks, but it’s trickier than you’d think to pin down a definition.  I started with: these rides rely on rapid or erratic motion for the core ride experience.  But then I was like … umm … Soarin’?  I thought about using height restrictions, but I think we can all agree that Tomorrowland Speedway is not a thrill ride.  In the end, I’m going with “you know it when you see it”; those who disagree can fight me in the comments. 🙂

Coasters are an amusement park staple, but on the thrill-geek scale most of Disney World’s offerings are considered somewhat tame, with only Rock’n’Roller Coaster even boasting an inversion.  They’re not kiddie coasters (mostly), but they definitely aren’t contenders on the scale of bigger, higher, and faster. Still, it’s not surprising to find that Disney’s roller coasters are popular with returning visitors — they’re family-oriented fun that use theming and backstory to make up for what they lack in G-force.

All except Barnstormer, that is.  Slinky Dog and Seven Dwarfs are just about equally accessible to younger kids, so Barnstomer’s lack of staying power is most likely a reflection of it’s lack of “Disney-fied” treatment.  Poor Goofy.

Some of these rides are standard “types” found elsewhere that are heavily themed by Disney.  Tower of Terror, for example, is a drop tower ride, a design found in many amusement parks. The difference is that most of those rides have you wait in line to unceremoniously board the car before simply activating the drop. Tower of Terror, on the other hand, creates an experience by providing environment and story to explain how you come to be sitting in this elevator and continues this story all the way through the drop. Others in this category are hybrids containing features such as audio-animatronics that Disney is known for, or Disney IP, or designs that originated with Disney such as Soarin’.

Overall, these rides are very popular.  Thrill rides can serve as a park mainstay even without the Disney treatment, and the uniqueness of these offerings draws returning visitors even though these rides often have some of the highest waits in the parks.

The dark ride, where passengers in moving vehicles are entertained by scenery, is a form that’s at the core of Disney’s family oriented offering.  These rides have no restrictions that keep young, old, pregnant or infirm from participating, so whole families can share the experience together.  Although the format is as old as the Tunnel of Love, the level of creativity and detail that Disney applies stands out, as does their use of audio-animatronic characters.

As a class, these rides are very popular and most of them attract significant percentages (> 50%) of both first-time and returning visitors.  What’s interesting about this is that these ranges are similar to what we see with the thrill rides even though these rides consistently receive lower ratings; the color heatmap has a lot more yellow than the consistent strong green that we saw in both categories of thrill rides.

Many Disney dark rides that don’t use boats have an Omnimover system, with a continuously loading track of vehicles.  Most of these rides are people-eaters that load fast and process anywhere from 2,000 to 3,000 people per hour.  I’ve got an interesting explanation for the trend we see here.  The four rides at the top, the ones that are priorities for returning guests, opened in 1983, 1975, 1971, and 1982.  For all intents and purposes, these are opening day attractions of their parks, or close to it.  The subsequent rides starting with Winnie the Pooh opened in 1999, 2007, 1971, 2011.  So here’s my theory: those older rides draw so many returning visitors because they are accessible (relatively short waits) and they are rides that many of those visitors experienced as kids — the nostalgia value is high.  If we wait another 40 years, perhaps Winnie the Pooh will have lines as long as Peter Pan.

Nostalgia might or might not explain the loyalty to Gran Fiesta Tour (2007) here.  It could be that the ride doesn’t actually feel all that different than El Rio del Tiempo (1983), which it replaced in the same track.  Or it could just be a favorite with returning visitors because it’s charming, it’s classic, and it tends to have a short wait. And it’s an an air-conditioned pavilion that serves great margaritas?

Theater shows offer something that most Disney World tourists would give their eyeteeth for at some point — the opportunity to sit down for more than 3 minutes at a time.  Like the dark rides, these offerings can be experienced by the whole family at the same time.  Looking at the very leftmost column though, we can easily see that as group we are starting to wade into the territory of attractions that many visitors find to be “missable”.

As a group the audio-animatronic shows are mostly quite old; opening day attractions in their parks or near to it.  So maybe nostalgia explains why so many returning visitors come back to this group compared to the other two types of theater shows. Or, it could be that we are seeing some self-selection here, with people who are likely to come back to these shows also being more likely in general to return to Disney World instead of choosing other vacation destinations.

Performances are a mixed bag, with a wide variety of formats and levels of interactivity.  This means it is perhaps not surprising that it’s difficult to find any correlation here between overall popularity, rating, popularity with return visitors, and any particular show characteristic.  They’re not only a mixed bag, they’re mixed results.

Performance is pretty consistent across the category here, with the exception of the Short Film Festival in EPCOT.  Maybe the lack of 3-D is really that important?  Or maybe visitors in the parks don’t want to spend their time on something they could see from their own sofas on Disney+.

These rides are the siblings and cousins of those found at any local amusement park, traveling carnival, or county fair.  They might have a little something extra spiffing them up at Disney World like the spitting camels at the Magic Carpets of Aladdin, but you could airlift them from Disney World to the state fair and they’d look right at home.

Flying spinners make up the bulk of this category, with 3 in the Magic Kingdom (4 if you count Dumbo twice) and one in the Animal Kingdom. Tomorrowland Speedway is a stretch to include here since its track is so much longer than most drive-it-yourself car or train rides, but I’m going with it anyway.  With the exception of the Mad Tea Party, these rides are rated much more highly by those whose age registers in the single digits, which may partly explain their lessened popularity with returning guests.

Attractions that you take in at your own speed (and usually don’t wait in a line for) can make a big difference in the feel of your day. My family finds Hollywood Studios to be challenging, with most rides having relatively long waits and the shows on a precise schedule.  By contrast Animal Kingdom has a similar number of rides, but the walking trails and street entertainment make this park feel more relaxing for us. As a category this group is kind of all over the place — it’s difficult to draw any conclusions here.  I feel a little like these attractions are the janitors of the theme park experience.  They’re often overlooked, but if you took them all away they’d be missed pretty rapidly, especially on the most crowded days.

I was truly surprised to see the very low popularity of Meet & Greets, by a good margin the lowest of any category.

Yet, these experiences are rated quite reasonably.  When thinking about what might be going on here, I think there are a few factors in play.  The first is to note that just because you thought an experience was worth it one time doesn’t mean you want to come back and do it again; we’ve seen plenty of disconnection between a ride’s ratings and its popularity.  The other driver here may be something that I’ve personally been a party to.

On my first trip as an adult with children, I thought the idea that people would pay for an expensive meal just to meet characters was really a poor value.  After waiting in the completely unshaded queue for a little over an hour, in August, so that my daughter could meet Ariel in her Grotto, I changed my mind in a hurry.  Whatever the overall popularity of this format, I do wonder how much of the drop-off with returning visitors is driven by parents who view character meals as the answer to long lines.

Thrill rides are the most popular attractions, followed closely by the dark rides, but popularity often doesn’t correlate with overall rating.  Across the dark rides, and continuing into the audio-animatronic shows, there is a trend of old (like opening-day old) rides drawing a higher percentage of returning visitors than first-timers.  This could reflect nostalgia, or it could be partly due to self-selection bias where those who don’t enjoy these types of classic Disney offerings simply don’t come back.

Midway rides show a clear ratings cliff as you move up to older age-groups, and tend not to be popular with returning visitors either.  In contrast, Meet & Greets are the least frequently rated group despite receiving consistently high rankings from those who participate.  They also show a consistent trend of being rated by first-time visitors more often than returning guests, which might be associated with a shift to character meals for character interactions.

What’s your favorite ride to come back to? Is Soarin’ a thrill ride?  Do you buy my nostalgia-based argument for the popularity of some rides with returning visitors? Let us know in the comments.

8 thoughts on “Veterans vs. First-Timers: Which Disney World Attractions Do We Come Back To?”