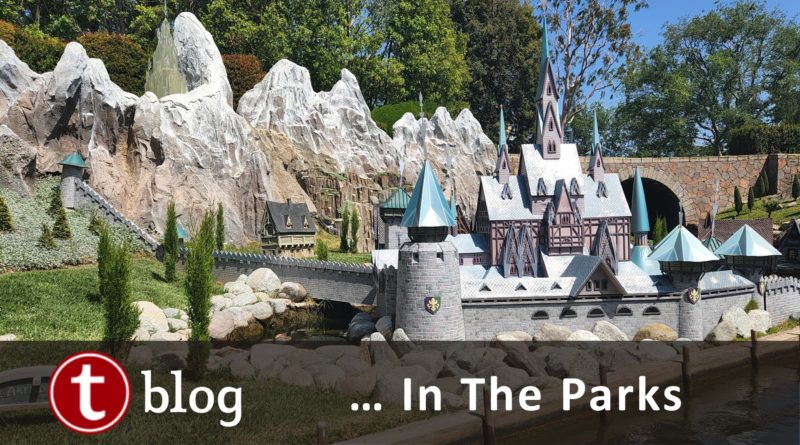 In late April of this year, my husband and I took our first ever trip to Disneyland. We were on a rare trip away from the small humans that dominate our lives, so our time was limited. That meant that we only had two days to experience the best of what both parks had to offer. So I did the reasonable thing and … analyzed the data. What was going to be possible? How disappointed would I be in things that I would inevitably miss? And, yes, should I bite the bullet and purchase Genie+ to help me skip through some lines?

If you’ve read any of my articles or watched any of my YouTube episodes about Genie+ at Disneyland, you already know that it’s SO MUCH EASIER than at Walt Disney World. You still save tons of time, but it comes with almost none of the stress of the WDW version. That’s mostly due to two things: slightly different rules and much lower demand thanks to Disneyland being a “locals park” and Walt Disney World being the Vacation Kingdom of the World. I’m not going to go through a step-by-step analysis of what we did (because, even as a reluctantly-labelled Genie expert, I still get things wrong). But I will share what I learned and tips that I have if you are considering purchasing Genie+ for your next Disneyland trip.

Which Rules Are Different?

If you’re familiar with Genie+ at WDW – and, let’s face it, there’s much more information available about that version – there are some key differences that you need to be aware of at Disneyland.

In this case, you could immediately start making reservations as soon as you tap into the park. Let’s say, for example, that the park opens at 8 am. If that’s the case, then security will usually open at 7:15, and tapstiles will start letting you into the park by 7:30. So if you’re an early riser and first in line, you could conceivably make your first reservation right at 7:30 after you tap in. But this not a wise choice if you’re not park-hopping, or you’re making reservations for this same morning park.

Why? I’m glad you asked. It’s because of crowd patterns on the west coast. Early mornings have very low crowds, relatively speaking. So the time you “save” by getting in a Lightning Lane first thing in the morning is minimal. And if you’re in a Lightning Lane, you’re wasting time that you could otherwise be in low-wait standby queues for attractions that don’t offer Genie+ (cough – all of Fantasyland – cough). Let’s take a look at what I suggest instead.

Morning in Disneyland with Genie+

If you’re in Disneyland for the morning (or all day) and want to use Genie+, I highly recommend rope-dropping Fantasyland. None of these attractions offer Genie+, and they will all command really high standby waits by late morning and through the rest of the day. All for relatively short-duration attractions that will leave you saying “was that really worth it?”. Think Peter Pan’s Flight (which is one of them) multiplied by 5 or 6 similar wait-to-duration-ratio attractions. I loved hitting Snow White, Pinocchio and Mr. Toad all in a row first thing in the morning with almost no waits. I would not have loved them all in a row if I had to wait 30 minutes or more for each of them.

Don’t immediately book any Genie+ reservations. You won’t want to get out of standby mode until ~90 minutes after the park opens. For that reason, I recommend watching the tip board while you’re in those shorter standby lines and waiting to book either Matterhorn or Space Mountain (both relatively nearby) when they reach return time windows of at least 9:00 am – 10:00 am, or even more ideally, 9:30 am – 10:30 am. This gives you a solid amount of time to take advantage of lower standby waits before you start your Genie+ excitement for the day.

For example, on our trip, Disneyland opened at 8 am. We were able to experience 5 Fantasyland attractions (Snow White, Pinocchio, Mr. Toad, Casey Jr, Mad Tea Party) all before 9 am. Around 8:45, Matterhorn was finally booking at a 9:30 am return time, so I snagged it. Then after Mad Tea Party we enjoyed it’s a small world and then were ready to hit Matterhorn at 9:25. After that point, we were still able to grab our next return time that we wanted (in this case, Indiana Jones) without it being more than an hour in the future.

Morning in California Adventure with Genie+

Once again, don’t book anything with immediate park-open return times. Chill out a bit and enjoy your morning before beginning to redeem. Like for Disneyland, ~90 minutes after park opening is a good time for your first return window to open. Otherwise you’re wasting time in Lightning Lanes when you should be taking advantage of those low standby waits at other attractions. My personal favorite plan? Rope drop one of the two Individual Lightning Lane attractions (WEB Slingers or Radiator Springs Racers) and then use single rider for the other.

Some savvy choices to make with that first Genie+ reservation could include Guardians of the Galaxy: Mission Breakout or maaaayyyyybe Soarin’. Really I’d just go with Mission Breakout here. The Pixar Pier attractions don’t generally generate really big standby waits in the morning, so I’d just head there sometime before lunch without Genie+ and make the best of it.

Now let’s say that you’re definitely going to park hop when you’re eligible at 1 pm. This suddenly unlocks a totally new potential strategy, and my preferred strategy of the two. That’s totally ignoring Genie+ for your first park, and instead only stacking for the afternoon/evening. Why is that? Because stacking is awesome. The YouTube videos say so.

Lower demand also makes stacking for your second park feel extra wonderful. That’s because even if your first two (or three) reservations are big headliners, they probably still won’t be booking out too far past 1 pm (hopping time) in the morning. So at 7:30 (thirty minutes before park opening), I book a headliner at my second park, and it has a 1 pm return time because that’s what it automatically defaults to. At 9:30 I make a second reservation, and that headliner still isn’t booking out past 1 pm, so it also defaults to a 1 pm return time. At 11:30, I book my third headliner, and it’s only booking out to 1:30 pm right now (even that’s a stretch, honestly).

That makes it so that when I hop, I can immediately skip the line at two headliners, and by the time I get to the third, it’ll already be 1:30 pm so I can get right in line. When I get in line, I unlock another reservation, and by this point I’m down to second-tier options that are barely booking ahead of the current time. So I can start bouncing around and booking reservations that make sense and keep skipping basically all of the lines.

This is the strategy that we used for our second park day, where we hopped to Disneyland at 1 pm. We had Hyperspace Mountain and Buzz Lightyear booked at 1 pm, and Millennium Falcon: Smugglers Run for 1:30 pm. Throughout the rest of the afternoon and evening, we used almost every other potential Genie+ reservation. It was amazing.

We stumbled upon a “trick” for Genie+ at Disneyland that is almost never possible at WDW because of the high demand there. And it’s what I like to call Disneyland Downtime Dominance (because I like alliteration). Whenever you hold a Genie+ reservation for an attraction that happens to be experiencing downtime when your return window opens, you immediately get an anytime/anywhere pass (excluding Individual Lightning Lane attractions). Bonus, it doesn’t count as using a reservation at that attraction, so you can book it again if it comes up later in the day … OR … you could book it again immediately even if it’s still down.

We discovered this trick by accident. We made our Matterhorn 9:30 reservation like good little researchers, and at 9:30, Matterhorn was unexpectedly down. I checked my app, and I had the lovely anytime/anywhere pass. “How nice,” I thought to myself. “This’ll be great for our DCA afternoon later,” and then I immediately booked Indiana Jones instead. Luck was on our side and right after I booked Jones, Matterhorn came back up and we popped into the standby queue and had a 5 minute wait. No Genie needed, thank you very much.

After tapping into Indiana Jones, I noticed something funny on the Tip Board. Big Thunder Mountain had been down all morning, but was still offering Genie+ return times. And they were only 15 minutes in the future. So, I did the smart thing and I gambled. I booked it, literally hoping that it would stay down for at least 15 more minutes. Miracle of miracles (sarcasm) it stayed down and I had gotten another anytime/anywhere. And then I immediately booked it again, for another return time only 15 minutes away. And after patiently waiting for 15 minutes (actually I was paddling a canoe), I got yet another anytime/anywhere. I could’ve kept doing this and racked up all of the passes for the afternoon. But, I made a rookie mistake and felt guilty. I felt like I was cheating the system. That was silly of me. The system cheats me all of the time, it’s totally valid to try to even the score. Ha!

This typically isn’t possible at WDW because almost everything books so far in advance that waiting around for an anytime/anywhere pass isn’t worth it. But at Disneyland, because Genie+ usage is so low, there are tons of attractions booking 15-30 minutes ahead. And with downtime being such a big issue right now (more on that in a future article), it’s a pretty safe bet that something that is down will stay down for 15-30 more minutes.

Do you have any Disneyland-specific Genie+ tricks? Were my real-life examples helpful in understanding? Because if so, you should email len@touringplans.com and tell him to send me other places to test out new things too … just saying …

8 thoughts on “What I Learned About Genie+ At Disneyland”