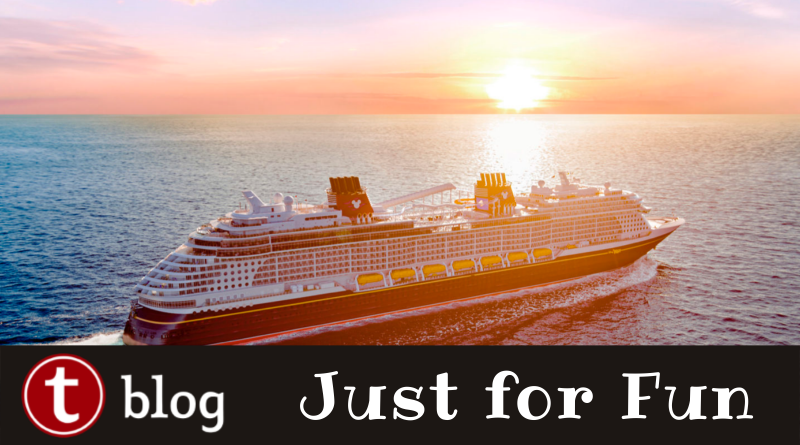 There was a lot of information released last week about the Disney Wish. While the video presentation scratched the surface with the big-name announcements, press releases after the fact provided a wealth of additional information. Still, when you look on Disney’s web site, there’s a lot of places that are labeled “More Magic Coming”.

The ship I’m most familiar with is the Disney Fantasy, having spent a little over a month at sea on her over the past few years. I went deck by deck, comparing the snazzy looking deck plans on the Disney Cruise Line web site, the stateroom deck plans for the Wish, and the deck plans for the Fantasy to try and figure out what might be going in each mysterious area. My thought was that there are certain items that the new ship has to have (like a Guest Relations desk), and things that would be surprising not to have (like a place to get your photos), plus some things that would be nice to have but wouldn’t be a deal-breaker (like a juice bar in the fitness area). I created a list of what is included on the Fantasy that is not yet found on the Wish, compared deck plans and available space, and came up with my list of possibilities.

Full disclaimer, I have no inside knowledge. I haven’t snuck into Imagineering or on board the ship to look around. I’m not cybersleuthing through permits or meeting people in dark alleys for the exchange of paperwork. These are just my guesses — and it will be interesting to see what comes out in the next round of updates.

I think one of the greatest changes is that there’s some logistical revisions that make a lot of sense. Moving the kids’ club down to Deck 2 really works out well — unless that’s where your stateroom is. But for deck 2, there’s not a lot of mystery. What you see is what you get, and there’s not a lot of space to add additional surprise features. 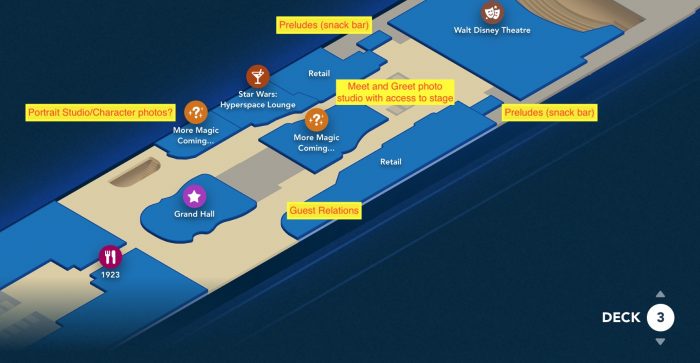 Deck 3 is where it starts to get interesting. This is the deck where you walk on board to thunderous applause and have that advertising-made moment of embarking on your voyage. It also is where you leave the ship on that last day. One challenge has been that on your last day, if you didn’t pick up your photos before, you had to go up to another deck to pick them up on your way out. To simplify things, I think that one of the areas there would be a good spot for a portrait studio and place to view and purchase your photos. I also would predict that one corner of the area marked “retail” will actually be the Guest Relations desk. Not labeled, but very clearly defined, would be two snack bars just outside the Walt Disney Theatre. The central “More Magic Coming” area is where I’d like to make a prediction that we’d have spots for character meet and greets. In my perfect world, it would be a spot for ticketed meet and greets (which there will likely be more on this ship with Frozen, Princess, Marvel, and maybe even Star Wars ones), and they’d use digital backgrounds that could be swapped out quickly. We’ll have to see what that mystery area is, though. . .

The layout for the aft “More Magic Coming” area screams lounge district to me. The sizes look right, the location looks perfect, and overall we didn’t get a lot of info in the big reveal about adult areas away from dining and the pool. I would be surprised if there wasn’t one that was pub-themed (perhaps the one on the port side) and then the smaller starboard one being a more intimate lounge. (Disney, I love Skyline, just saying. . . ) The other one feels like it would be a good live music and/or dance venue. For those who are familiar with D-Lounge, my thought is that Luna becomes the replacement area for D-Lounge, but with a larger footprint for those times when the place hits capacity.

We’re going to take Deck 5 in two sections, starting with the midship area where there’s a lot of mystery locations. In the long area on the port side, my thought is that this is an expanded Bibbidi Bobbidi Boutique area. There really isn’t any other place with a footprint for it on the ship, and I can’t imagine Disney giving up the money that the BBB brings in. Plus, if I was a betting person, I’m guessing that we’ll see expanded offerings. Of course we’ll still have princess makeovers, and if there’s pirate night on board, the pirates league will make its appearance. But I can’t imagine Disney won’t take the opportunity to do Marvel makeovers as well to go with that new restaurant experience.

On the starboard side, they did label a DVC desk area, but I’m thinking that would be a good place for the other “housekeeping” type of services: Connect at Sea desk, future booking desk, port adventures and port shopping, and so on. I’d also like to see a Vista Gallery there with a limited amount of art and with kiosks for on-demand art orders shipped directly to your house (instead of the binder that you’d have to flip through in the main shops). We haven’t heard that Midship Detective Agency is coming back, but what if there’s something similar (maybe Marvel-themed missions?). That would be a good location for the “starting point”, and it certainly sounds more magical than “here’s where you can get your WiFi fixed.

Also on this deck, forward of the upper viewing area for Luna, I can picture those being two more lounge type areas for adults by night and for family activities (or mixology classes) during the day. Wouldn’t a paired “Hero Lounge” and “Villain Lounge” be great?

One initial head-scratch from me was the moving of the Senses spa and fitness room down to deck 5, but once I did some up-close looking, it made so much sense (pun intended). First, I think that there will be a Rainforest Room facility and that will be on the port side. Also on the port side (near where the check-in area is located), I see a little “bumped out” area that would be perfect for the senses Juice Bar. The U-shaped area would be the spa treatment rooms, and then the fitness area would contain locker rooms, the gym, and maybe even a small classroom space for certain personal training options. But in the middle between the fitness area and the training area, there appears to bee direct access to the jogging track, which is now on deck 5. . .  and. . . 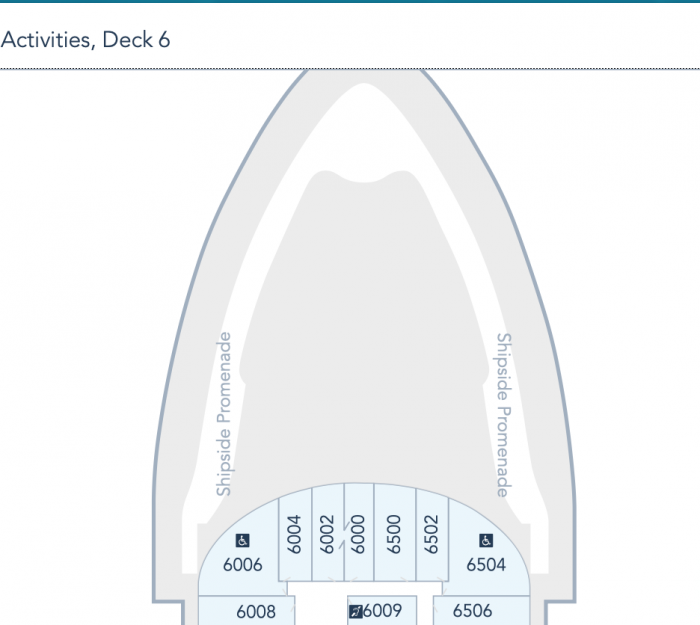 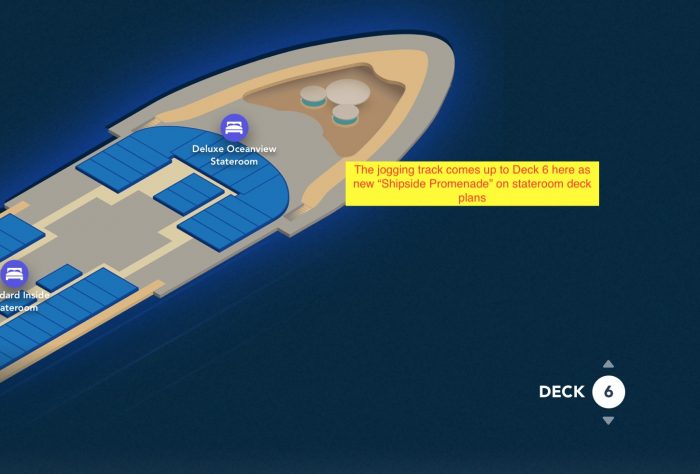 To me, this is such a brilliant idea, moving the jogging track to a half loop of the ship in the front where you can easily access it from the fitness center. Go for a run, head to the locker rooms to shower off, and then head back to your room while everyone is still asleep. Maybe grab something from the juice bar on the way back. And there’s some huge plusses with that change. Assuming that the area under the lifeboats will still be available for shuffleboard and lounge chairs (and I think that is a safe bet because it also is a primary location for muster stations), now you don’t have to worry about joggers dodging shuffleboard pucks or vice versa. It also means that joggers won’t have to jog through the smoking areas at the aft of the ship, and they won’t have to run through the not-so-scenic areas with a variety of crew access doors. I’m hoping that I’m right on these changes because they make so much sense and will improve the ship for a number of people — both for my jogging husband and for me sitting in those good ol’ deck 4 lounge chairs.

In the next part, I’ll be looking at the upper decks, because there’s a lot to unpack there!

What are your thoughts on these possibilities? Have any other theories or think that there’s any of my theories that you’d like to see? Let me know what you think in the comments.