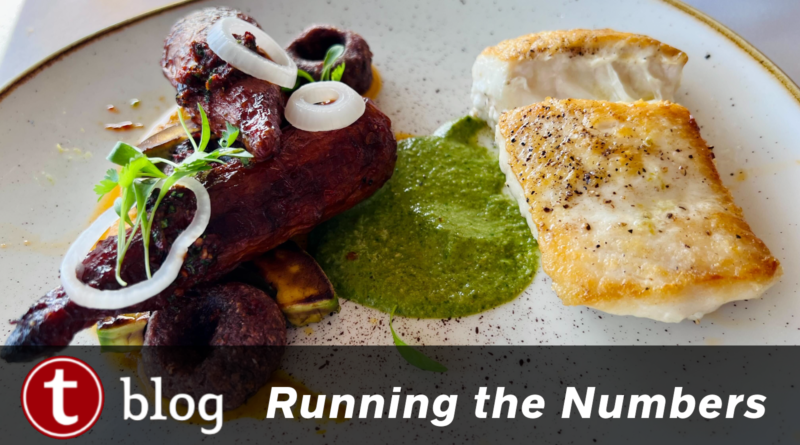 If your trips to Disney World are full of rope-drop to close park plans, this might not be the article for you.  But if you love table service dining and you’re not bringing a car, then read on. Today we’re going to line up resorts based on how much dining can be easily accessed using a particular hotel as home base.

If you’ve looked for a house or an apartment in the last several years, you might have noticed that many real estate listings now feature a “walkability score”, a number that tells you how convenient it is to get to supermarkets, pharmacies, parks, etc. if you live there and you don’t have a car. We’re going to borrow that concept to create the “dineability” score for a resort.

Here’s the overall strategy: I’m going to assign each place (theme park, resort, etc.) where you can find dining a “location score”. The dineability score of each resort will be calculated based on its own location score, plus the weighted location scores of all “neighbor” locations that can be reached from that resort.

Let’s do Wilderness Lodge as an example to show how it works. The chart below shows the location score for Wilderness Lodge, its neighbors, the weights, and how they are totaled.

But, if you aren’t and you just want to see the results, feel free to skip ahead to the rankings.

What’s not in the location score

I’m going to begin here with what won’t be considered.

Quick Service locations. This score is all about table service.  It’s true that you might take the Skyliner from Pop to eat at the Riviera’s Primo Piatto, and maybe in some future version we’ll try to account for that. But today we’re keeping things simple by leaving it out.  There’s some terrific quick service available both in the parks and at the resorts, but most of it isn’t destination dining.

Quality. Surprised? Here’s the thing: Planet Hollywood at Disney Springs is currently ranked #91 out of 97 on our site, but 68% of diners still have a good meal there even though we give it just 1.5 stars. Maria & Enzo’s is currently ranked #94, but 69% of diners gave it a thumbs up and we gave it 3.5 stars. (In case you’re wondering how that happens, the number of reviews and how old they are figures into the rankings). Food quality is too much in the eye of the beholder and it can turn on a dime within a couple of months; even the “worst” restaurants at WDW will still make a lot of people happy. So I’m not going to try to tackle this, because there’s not really any way to get it “right”. Call me a coward if you want to, I can take it.

Reservation Availability. I know, I know, having to book your table 60 days in advance or stalk it with the Reservation Finder doesn’t exactly scream convenience. But we’re focusing on the convenience of your vacation once you have arrived at the World, and many guests are happy to put in lots of effort up front, as long as friction on their actual trip is low.

What is in the location score

There are only two things that affect how many points a restaurant adds to the location score: how expensive it is and what kind of location it is. Meals that are listed by Disney as $$ ($15 – 34.99) or lower get 2 points. Everything else gets 1 point. Only restaurants that serve dinner are counted, and pricing is based on the dinner menu.

Why am I dinging expensive locations? Well … because they’re expensive. Most families, when they go on vacation, might splurge on a high-priced restaurant once or twice, but they’re not going to do it every night. So 3 moderately priced restaurants are more accessible, in some sense, than 3 expensive ones.

I’m also knocking off points for being in a theme park or at Disney Springs. Restaurants that are in theme parks mean you need to use a park admission, or maybe to have a park hopper. Restaurants at Disney Springs don’t need a park ticket, but they do need you to start at a resort, and that means no finishing out your day at a park and heading straight to dinner. These constraints add friction when you’re planning, so I took 50% off the base location score for theme parks and 65% off for Disney Springs.

Next question: what qualifies a location to be a neighbor?  And how are neighbor scores weighted?

I defined a neighbor as any location that could be reached using non-bus Disney transportation, with no transfers (except on the Skyliner, because Skyliner transfers are fast).  Why no buses?  First, stroller folding (which you don’t have to do on monorails, boats, or the Skyliner), and second because the buses add so much connectivity that this would have become meaningless. Besides, strolling over to take the Skyliner or a boat to dinner is atmospheric; the trip is part of the experience. Taking the bus is just … well, not very exciting.

Walks of less than 10 minutes (about .5 mile) as measured using Google Maps directions were also included, unless Skyliner or monorail transportation was available. More importantly, a walk of less than 10 minutes on either end was considered to be “part of getting to transportation”, so for instance Yacht & Beach Club is considered a neighbor of Caribbean Beach despite the short walk after getting off the Skyliner at the International Gateway.

Scores for neighboring locations are weighted based on the transportation method used, with the most convenient methods having the highest weights.  Monorail and Skyliner, which arrive frequently and have some of the most predictable transit times, were weighted at 0.7. Boats were weighted at 0.5, and walking was weighted at 0.3.  Walking weights were included only if the alternative was a boat.

There’s a lot of subjectivity going on here. I assigned weights based on how much impact I thought certain types of touring or restaurant preferences reflected the average guest. But maybe you’re not the average guest!  So if, for instance, you always come back to your resort in the late afternoon before heading out to dinner, then go directly back for an evening swim afterwards, keep that in mind as you’re looking at scores for resorts that have Disney Springs as a neighbor. In your “personal dineability calculation”, those resorts might score higher than they do here.

Now that we established the rules, we can calculate all the scores. As it happens, they fell roughly into 4 different groups.

An embarrassment of riches

Crescent Lake resorts ran away with this contest due to their easy access to both EPCOT’s World Showcase and each other. A look at Yacht & Beach Club’s top scoring grid easily shows how connected these resorts are to other dining locations.

Boardwalk is just tenths of a point behind and the Swan Complex with the Swan, Dolphin, and Swan Reserve comes in at 24.5.  More juggernauts here are Caribbean Beach/Riviera at 21.9 and Art of Animation/Pop Century at 21. These aren’t the highest scores in this group but those are Moderates and Values with incredible dining access through the Skyliner network.

Next up is the monorail resorts, all within about a point of each other.

The other resort in this range is Saratoga Springs, which gets a 4-point boost over Old Key West by virtue of the walking path to Disney Springs and comes in at 12.4.

There’s a lot of variety in this group. Old Key West and Port Orleans lean heavily on their boat access to Disney Springs to pull up with an 8.5. Coronado Springs holds a 7 despite having no connection to anything.  And Wilderness Lodge and Fort Wilderness lean on each other to bring up the rear with another 7 and a 6.5.

With a dineability score of just 4, Animal Kingdom Lodge is not the lowest of the low. But for a resort that boasts the formidable trio of Boma, Jiko, and Sanaa, that feels pretty pathetic. Here’s the thing: two of those restaurants are expensive and all are serving cuisine that feels a little similar. Much as I hate to see AKL do poorly in anything, I feel this is on the money.  If I’m staying for 5 days and eating 3 table service dinners, I’m definitely going in search of more variety than I can find here … and that means either buses (for parks or Disney Springs) or Minnie Vans / Ubers to get to dining at other resorts.

If you’ve been counting, you might realize that Animal Kingdom Lodge is not the lowest score. The All Stars have no table service and are not connected to anything (except by buses), leaving them with a rock bottom dineability score of zero.

Did these scores match your expectations based on your experience? How would you have done the math differently? Let us know in the comments!

2 thoughts on “Which Disney World Resorts Are Best for Convenient Dining?”