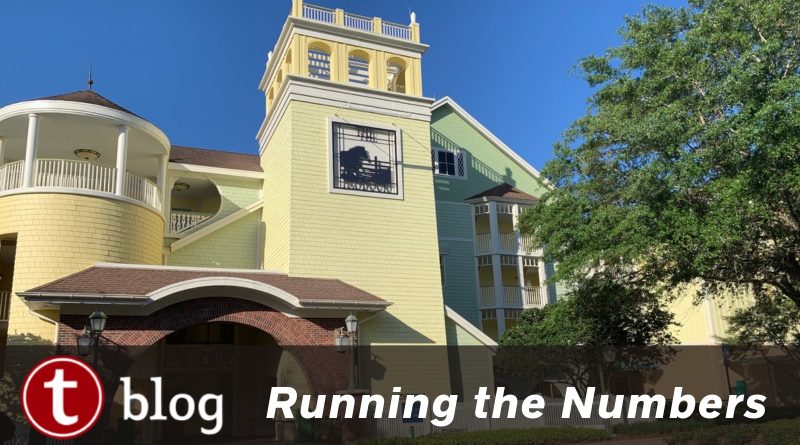 Disney Vacation Club (DVC) resorts have some of the highest satisfaction ratings of any on-property Walt Disney World spots. But they’re also some of the most expensive. Maybe you’ve got points to spend (or you’re interesting in renting). How do you decide where to look first? I’m going to do a lot of digging into that question over the coming weeks. But for today I’m going to be looking at some very specific numbers. Last week I pulled resort satisfaction vs cost. It assumed that you were paying out of pocket to stay anywhere, and it compared using rack rates. Andy commented and pointed out (pointed? See what I did there?) that the out-of-pocket cost for DVC resorts probably isn’t the best way to compare them. Point made (I did it again), so today I’m looking at DVC resort satisfaction vs point cost. Come for the data, stay for the point puns.

Satisfaction ratings are the same as they’ve always been. Each post-visit survey gets a rating for the hotel stay, on a scale of 1 (very dissatisfied) to 5 (very satisfied), and I average them all. For this analysis, I pulled surveys from the past 3 years.

Point cost is, once again, where it gets interesting. Thankfully, Disney has very nice point charts that make pulling point cost much easier than out of pocket cost. I used the 2022 point charts and averaged out cost by night and weighted it by room type. But this time I went one step further. I also averaged it out individually by room type. So I have an overall point average, but I also have a studio average, 1 bedroom average, 2 bedroom average, and grand villa average for each resort. That way we can look holistically, but also by individual room type. My family always stays in studios (and we rent points for our stays), so I could look specifically at that graph to try to find the “best value” – aka, highest satisfaction for lowest average points.

One Bedroom Villa Satisfaction vs Points

Do you have a favorite DVC resort? Do you choose where to stay based on price or other factors? Are you surprised by any of the results today? Let us know in the comments!

5 thoughts on “Which DVC Resorts are Worth the Points?”