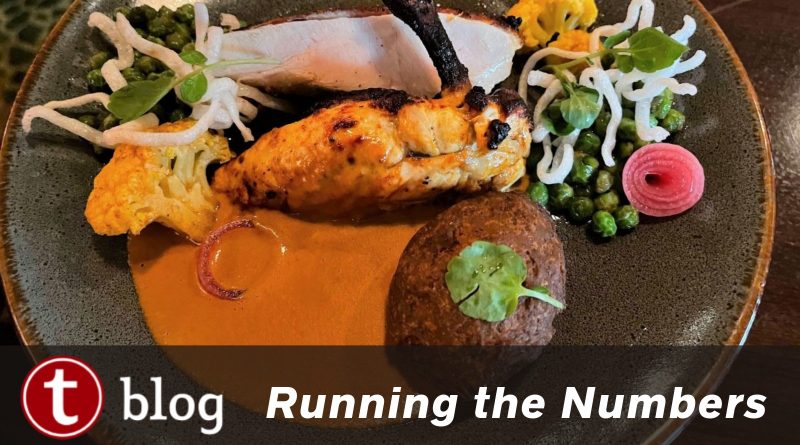 Food at Walt Disney World is expensive–especially the food at table service restaurants.  I’ve researched plenty of meal hacks and hidden values on menus across property in the months leading up to my family’s vacations. But sometimes I just want to simply know where I can expect to get good (or great) food at a price that isn’t going to make me cry when I get the bill. Or if I do pay a lot, I want to know it’ll be worth it. How can I know which restaurants are worth the money I’ll be spending there? We’ve got data on restaurant satisfaction, and I can pull data on restaurant cost too. All that’s left to do is mash them together and see what we can find out.

To compare satisfaction and cost across all restaurants, I need two pieces of comparable, representative

data. Satisfaction is easy. In post-visit surveys, we ask for a thumbs up or thumbs down for every dining location experienced during your trip. If I take the percentage of responses that got a thumbs up for each restaurant, that gives me a measure of satisfaction I can compare. For this analysis, I’m pulling all dining results from the past three years. That gives me about 93,000 reviews to work with.

For cost, things aren’t as straight-forward. All humans have different eating and spending habits. And I don’t know what they are. You could go to one of the most expensive on-property restaurants and just order an appetizer and leave. Or you could spend all night there with multiple courses and drinks. Or you could go to the same restaurant for multiple different meals and even with the same spending habits spend very different amounts for breakfast, lunch, and dinner. So I made some decisions. I’m going to pull average dinner entrée cost for each location. This means I’ll lose some information. I’ll be a little off on cost for restaurants that, for example, are less expensive at breakfast than dinner or vice versa. But it’s a start, and based on the results, I’m comfortable with this calculation. For now. 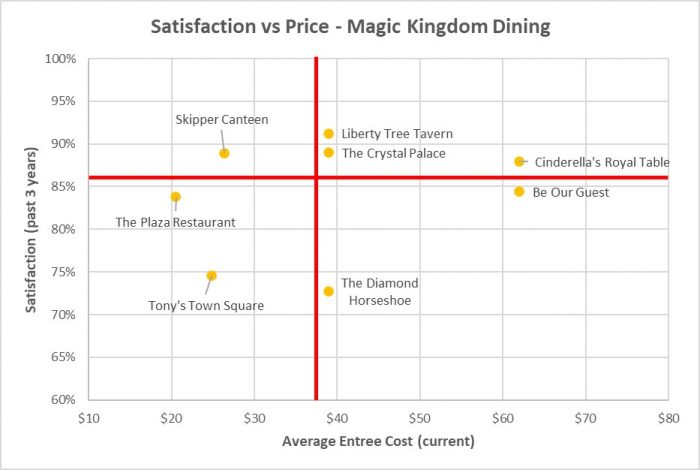 Do you have a favorite table-service spot that doesn’t break the bank? Are you surprised by where a particular restaurant showed up in the charts? Let us know in the comments!

9 thoughts on “Which Walt Disney World Restaurants Are Worth Your Money?”