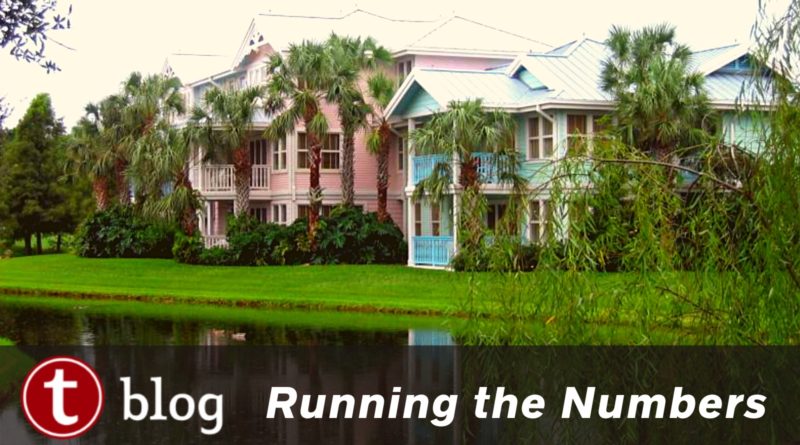 For our first two trips to Walt Disney World with kids, my family stayed at Animal Kingdom Lodge, so we didn’t have to think about which building that we wanted to stay in. I still made room requests so that we wouldn’t have a marathon of walking to/from our room throughout the course of our trip. But in January 2021, DVC rental rates were so low that we took advantage of an opportunity and made a semi-impromptu trip to the Polynesian. Suddenly … I was lost. I had no idea what or where to request! And there were so many different buildings, all with different views and walking distances. Did I want to be close to the pool or the main building or the TTC (since the monorail was down) or the boat dock? I did what any good planning nerd does and used the Room Finder to make some educated guesses. But what I really wanted to know was where guests have been most satisfied. Because I trust the math, if other folks are happy on average, I know I probably will be too.

So in this post let’s look at the best (and worst) buildings on WDW property. That way you can figure out how to find or avoid certain buildings on your next trip without having to repeat my guessing game.

To judge satisfaction within a building overall, we need to know that satisfaction. After any WDW resort stay, TouringPlans users can submit a survey that asks them for a bunch of information. One of those pieces of information is overall hotel satisfaction, so that’s what we’re using for the base of our analysis today. They can also submit their room number, which is how I figure out which building they were in.

To make sure we don’t accidentally crown a building the winner if only one person has ever stayed there, I had to set some rules.

From that sample of 86 buildings, we’re going to look at the 4 highest and 4 lowest satisfaction averages to see who wins and who loses.

What are the 4 Best Buildings at WDW?

With its almost-perfectly-centered location within the Polynesian, maybe it shouldn’t come as a surprise to see Niue with an average satisfaction of 4.85. You’re basically as close as possible to the Great Ceremonial House. There aren’t many neighbors since the building only has 22 rooms. You have very quick access to two great pools. And you can easily make it to the boat dock, monorail (when it opens back up) and bus stop. You won’t have many room type options though. Two rooms technically have pool views, and one is a king bed that is wheelchair accessible. But the rest are garden view rooms with 2 queens and a daybed.

Building 62 at Old Key West is another example of an almost-perfectly-situated building. It has an overall satisfaction score of 4.87. In this case, it’s one of only three buildings at the resort that have elevators, which can be a big deal with strollers or tired knees. It’s far enough from road noise (don’t let this map fool you – if you pull up Google maps you’ll see how all of the buildings along the south and west sides are very close to busy roads). And it’s very close to the Hospitality House. Off of your back porch you’re likely to have a nice fountain view. All in all, a great choice.

For the second-best building on WDW property, we’re staying at Old Key West. But this result might be a little more surprising. Building 45 beats out Building 62 with an average satisfaction score of 4.88. But it doesn’t have the elevator that Building 62 has, and it’s not near the Hospitality House. But it is very secluded while still having convenient access to transportation and a pool. The views off of the pack porches are of a river with a forest behind it. You aren’t near roads. And the 1-bedroom villas in this building have access to the bathroom from the bedroom and from the living area (which only happens in buildings numbered higher than 30). So the quiet, relaxing location must make people very happy.

Now the time comes to crown the winner, which does turn out to be an entire resort. The DVC portion of the Grand Floridian is (currently) only one building. And that one building has an average satisfaction score of 4.90. If you’ve got the points to spend, this is certainly the place to be. Even standard view rooms have gorgeous scenery to look at. The location is removed from any hustle and bustle of the main resort. And you have quick access to the Magic Kingdom. It comes as no surprise that DVC recently announced the expansion of this resort by taking over the Big Pine Key building. Time will tell if those rooms end up being just as popular.

What are the 4 Worst Buildings at WDW?

I’ll admit – for the 4 worst buildings, I’m cheating. They’ll all be sections rather than specific buildings. But … I have your best interest at heart. I wanted to be as specific as possible when telling you which buildings are best. For the worst, I’d rather you know more to avoid than less. And so, at fourth-worst, we have the Aruba section of Caribbean Beach, with an average satisfaction of 4.23. Buildings 54 and 56 in particular have the lowest scores. Some of the timeframe when we were pulling these surveys includes Skyliner construction, so that may impact the scores slightly. But I looked at the scores across all time and there weren’t big differences.

Don’t let this nice, compact-looking map fool you. These All-Star buildings are HUGE and walking from the back of the resort to the lobby and transportation will kill your legs and feet. 8 of the 10 buildings at All-Star Music share closest access to a single pool – and it’s the smaller of the two pools. Ouch. Not much redeeming to say about this location, with its average satisfaction score of 4.19.

Just like Old Key West earned the number 2 and 3 spots for the best buildings at WDW, All-Star Music gets the dubious honor of having the 2nd-worst and 3rd-worst sections on property. Yay? Rock Inn’s average satisfaction is 4.18, just so slightly worse than Broadway. The same problems still exist here. No close access to anything. Not particularly great rooms. Small, crowded pool. Plus, who listens to rock music anyway? Maybe they can re-theme this section to The Rock after the Jungle Cruise movie comes out and is a smashing success. He proved he can rap (kinda) in Moana, so it fits the music theme.

You’ve made it! To the worst of the worst! The Mighty Ducks buildings at All-Star Movies flop to the bottom of the resort building rankings with an average satisfaction score of 4.13. Maybe it’s the the psychological torture of being so much closer to the lobby of a different resort than your own. Or the taunting of an icy theme when you walk through triple-digit temperatures for 15 minutes to get to your room. It could be that your toddlers were terrified by the creepy-looking duck-shaped masks. Regardless, this looks like the most certain spot to avoid on property.

Have you been fortunate enough to stay in one of the top buildings? Or do you think another location deserves to be in that top 4? Have you gotten stuck in Broadway or Mighty Ducks? Was it awful? Or not as bad as the numbers make it seem? Let us know in the comments!

12 thoughts on “Which Walt Disney World Resort Buildings are Winners and Losers?”